Add an Event
Newswire
Calendar
Features
Home
Donate
From the Open-Publishing Calendar
From the Open-Publishing Newswire
Indybay Feature
Publish to Newswire
Add an Event
Related Categories: San Francisco | Education & Student Activism
SFSU College Republicans Plaster Campus with Swastikas
by [Photos not yet available]
Monday Oct 22nd, 2007 11:38 AM
Just a heads-up, that the College Republicans have just handed the local left a modest political goldmine.
Never mind the direct equation of Earth Liberation Front's alleged torching of a Hummer dealership with the Ku Klux Klan or the Nazi Party of Germany... and also, let us set aside anything any of the text ostensibly "argues" (for we must use terms implying reason with care when speaking of right-wing American "discourse" at this moment in history).

For your purposes, dear activists, it should suffice that every single one of these 8.5x14" flyers, plastered all over campus this very minute, has "symbols" of "hate groups" on it, as part of the Rethug Youth call for a "dialogue" on "terrorism." These symbols include a prominent swastika, a swastika that visually leaps out at the viewer from many feet away.

Remember what they said about the GUPS flyer being blood libel? Well, it's time to go forth, and counterpose! If the direct comparison to the treatment of GUPS is made, the Administration will be hard-pressed not to (likewise) suspend the Rethug Youth group. Of course, that may be just what they want, as a setup for their upcoming Horrorwitz Week. On the other hand, what if they're not allowed to reserve any rooms on campus in which to hold their little rally, because they're suspended for plastering the campus with swastikas?
§SFSU College Republican Flyer
by [Found Posted on Campus Mon. 10/22/2007] Monday Oct 22nd, 2007 2:41 PM 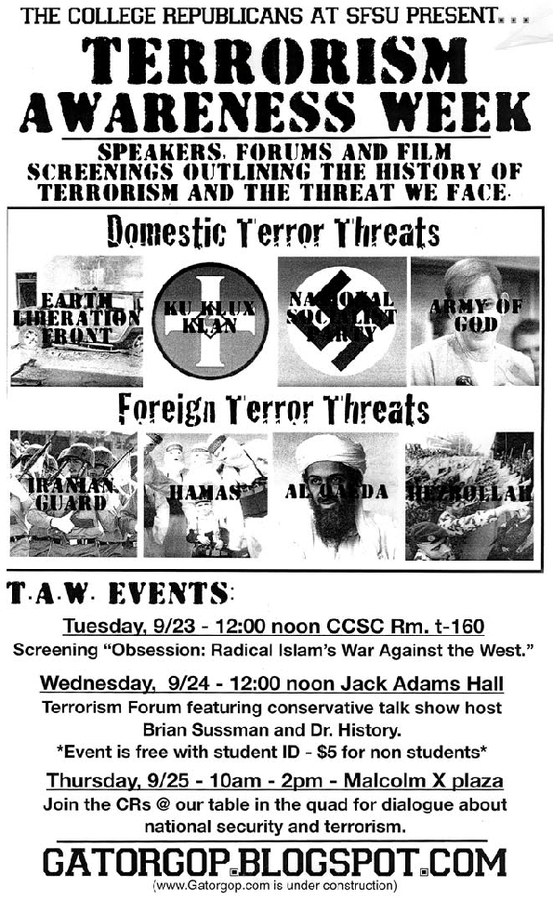 As SFSU President wrote to Chancellor Reed, in his letter of 25 July, 2002:

"Our response to the "blood libel" on the flier was immediate and strong. Any fliers that had been posted were removed by University staff and by students from the group involved, who had been made to recognize its absolute unacceptability. I wrote strong letters of reproof to each student group whose name appeared on the flier (though several had never even seen it before publication). The group chiefly involved, the Muslim Student Association, wrote a fine letter of apology in response. We investigated thoroughly to determine whether any University funds, even student association fees, had been used to print the flier. We have determined that notwithstanding the student government listing on the flier, no University funds of any sort had paid for it. This is significant information and we have shared it widely."

Corrigan's attribution of the flyer to the MSA was a mistake (intentional or otherwise), and GUPS was suspended as a student organization for the flyer in question.

Just to complete the admittedly digressive thought, here's a listing of his work online, you'll get the drift very quickly:
http://www.frontpagemag.com/Articles/authors.aspx?Name=Lee%20Kaplan


...and finally, here's a feeding frenzy in freeperville, when the shoe was on the other foot:
http://www.freerepublic.com/focus/news/684040/posts


All of this comes down to some very... meaningful double standards, to say the very least. Yet it is always possible to hoist such hypocrites on their own petards. We were just handed that opportunity. Anyone interested in anti-Horowitz organizing, for example, might want to duly note the above flyer, for future use.

Why not? They do it to us!
Add a Comment
§Not offensive
by use of swatiska
Tuesday Oct 23rd, 2007 1:01 AM
The most offensive thing on that flyer is labeling the earth liberation front a terrorist group!
Thats not an offensive use of a swastika- its being used to symbolize white supremacist organizations. Not a biggie.
Add a Comment
§Brian Gallagher at it again...
by Concerned Student
Thursday Nov 8th, 2007 7:37 AM
This thread was posted by the same student who tried to get the CRs thrown off campus for stepping on hamas and hezbollah flags, but instead handed them a HUGE political victory which has put them in a favorable national media spotlight. He should be ignored in his continued attempts to sanction the College Republicans, lest he hand the CRs yet another free round a national media!
Add a Comment
§Thank you, "Concerned" "Student"!
by Yes indeed.....
Saturday Nov 10th, 2007 12:04 AM
Ignore the Republicans, and they will go away!

Recent American history is such ample proof of where that logic gets ya....
Add a Comment
§greedy for gold?
by sri namus ohm
Tuesday Nov 13th, 2007 8:37 AM
feed it an it gets stronger, fight it and it gets stronger, there is no yin with out yang. we can not understand light with out dark. how can there be a left with out a right.
Add a Comment
Support Independent Media
We are 100% volunteer and depend on your participation to sustain our efforts!