Add an Event
Newswire
Calendar
Features
Home
Donate
From the Open-Publishing Calendar
From the Open-Publishing Newswire
Indybay Feature
Related Categories: Santa Cruz Indymedia | Police State & Prisons
Mayor to Back Public Assembly Ban in Parking Lots; Interview Replayed 10-18 FRSC 6:15 PM
by Robert Norse
Thursday Oct 18th, 2007 3:11 PM
In an interview Wednesday, Mayor Reilly announced her intention to cast the deciding vote to make it illegal to assemble, linger, or hang out in the 20 downtown surface parking lots. Those parking vehicles or bikes will have 15 minutes to come and go. She, Madrigal, Coonerty, Robinson, and Mathews voted to make all parking lots forbidden zones except for city workers and those with written permits.
The interview will be played tonight at 101.1 FM http://www.freakradio.org at 6:15 PM, with occasional commentary from me. It will be archived at. http://www.radiolibre.org/brb/brb071018.mp3 .

Reilly expressed zero interest in any discussion of whether the police stats justified a change in her vote from last year (when she voted against expanding the "no trespassing" to the lots). She didn't seem to care that the police didn't give a 6-month or annual review. She expressed no concern that they provided no comparative statistics to show crime elsewhere downtown as compared with in the lots. She took seemed indifferent to the fact that no alternatives are being provided for people whose home is their vehicle who will be driven out of these lots under the 15-mintue rule.

She also refused to put the matter of the evening agenda where more people might be likely to attend, asserting that two long public hearings were already scheduled. She could have scheduled the evening hearing on this matter two weeks ago, knowing it was coming back, but chose not to.

There was a kind of harsh insistent smile-coated insincerity to Reilly (or maybe it was a severe hostility) that profoundly offended me. I'd known that she'd gotten warped in office from previous community values, but her unwillingness to actually talk straight, but continuing to repeat the same stock phrases showed a kind of second-hand practiced disrespect for the public, which I'm still trying to understand and describe.

Some interesting comments (and some nasty ones) can be found on line following the Sentinel's hostile editorial at http://www.santacruzsentinel.com/archive/2007/October/14/edit/stories/01edit.htm

The Metro Santa Cruz has a critical swipe at the Parking Lot Panic law in its current issue at: http://www.metrosantacruz.com/metro-santa-cruz/10.17.07/nuz-0742.html

Chuck Huddleston plans a Saturday park-in protest downtown starting at 9 AM (parking whereever he can on Pacific Avenue in his black GM van conversion). Hear his commentary on FRSC at: http://www.radiolibre.org/brb/brb071011.mp3

See the National Law Center for Homelessness and Poverty's reaction to this law and the early parking garage paranoia law last year as well as Rotkin and Coonerty's response at: http://www.indybay.org/newsitems/2006/05/08/18219341.php?show_comments=1#18219371

The only crime "statistics" presented to justify this major backward shift in the welcoming quality of Santa Cruz were arrest/cite stats in 6 of the 20 parking lots at: http://www.indybay.org/newsitems/2007/09/21/18448912.php

HUFF is hoping to provide a meal for folks who get down to the afternoon session to speak on this issue. Organizations that want 5 minutes time to speak should contact Reilly beforehand as well as provide City Clerk Leslie Cook with a list of people that they'll be speaking for who WON'T be allowed to speak. (City attorney Barisone has given this his approval).

Plans for a "loiter-in" downtown in front of the Downtown Association, the Bookshop Santa Cruz, and other spots are being batted about. Post your suggestions for colorful and fun protests here!
http://www.huffsantacruz.org
§Flier, PDF Format
by Robert Norse
Thursday Oct 18th, 2007 11:11 PM 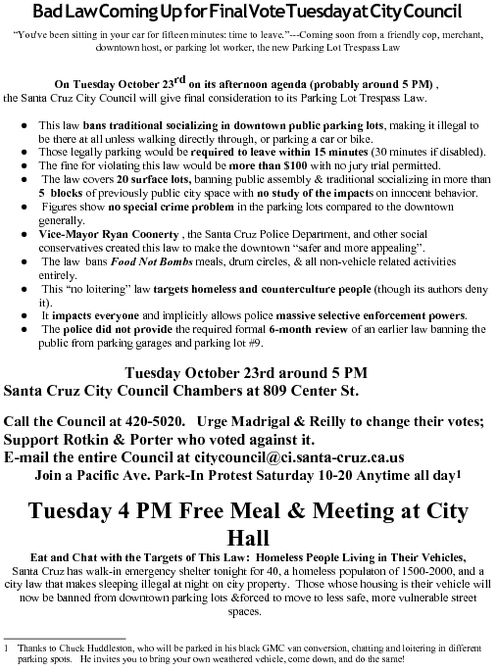 Download PDF (99.8KB)
O.K. PDF is supported. Let's see if this works.
http://www.huffsantacruz.org/
Add Your Comments
LATEST COMMENTS ABOUT THIS ARTICLE
Listed below are the latest comments about this post.
These comments are submitted anonymously by website visitors.