Add an Event
Newswire
Calendar
Features
Home
Donate
From the Open-Publishing Calendar
From the Open-Publishing Newswire
Indybay Feature
Publish to Newswire
Add an Event
Related Categories: North Coast | Environment & Forest Defense
Governor Vetoes Bill To Protect Klamath, Salmon Rivers from Suction Dredge Mining
by Dan Bacher
Monday Oct 15th, 2007 5:50 PM
Governor Arnold Schwarzenegger on October 13 vetoed AB 1032, the suction dredging bill supported by a broad coalition of fishing organizations and California Indian Tribes. The bill would have empowered the California Department of Fish and Game to take additional steps to protect endangered salmon, steelhead and trout against certain types of motorized gold mining activities in sensitive habitat on the Klamath, Salmon, Feather, American and other rivers. This veto occurs within the context of Governor's increasing attacks on California's fisheries and ecosystems. The same Governor that vetoed this legislation is pushing a $9 billion water bond that would build two new dams, expand an existing reservoir and build an environmentally destructive peripheral canal. This water grab would result in the destruction of the California Delta, the largest estuary on the West Coast, and devastate its rapidly declining populations of Delta smelt, longfin smelt, steelhead trout, chinook salmon, green sturgeon and other fish.

Here is the press release about the veto of AB 1032 from California Trout, followed by the Governor's veto message: 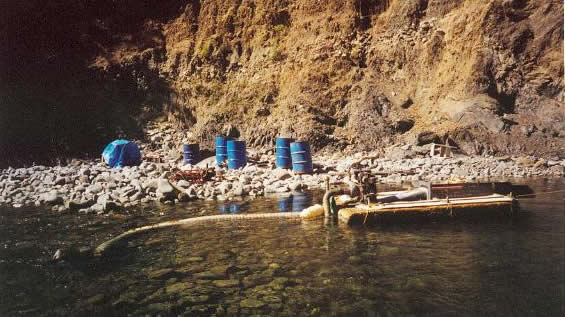 Sacramento, CA - It's been thirteen years since the California Department of Fish and Game (DFG) updated its regulations regarding instream mining activities. Since that time, multiple fish species, from the coho salmon to the Paiute cutthroat trout, have seen rapid declines and been placed on state and federal listings for threatened and endangered animals.

AB 1032 (Wolk), vetoed today by Governor Schwarzenegger, would have empowered DFG to take additional steps to protect these endangered fish against certain types of motorized gold mining activities in sensitive habitat. The law would have applied only to mechanical suction dredging and would not have affected recreational gold panning activity.

The endangered and threatened species that live in California's rivers and streams have faced increasing challenges over the years. The ill-effects of irresponsible logging and mining activities, commercial dams and water diversion efforts, and polluted run-off from agriculture and other industries have all decreased the quality of the state's waterways. AB 1032 focused specifically on the suction dredging used by gold miners for both recreational and commercial mining activities because it is one major factor known to disturb the sensitive habitat of vulnerable fish species.

"Trout are the 'canary in the coal mine' of California's waterways," said Brian Stranko, Chief Executive Officer of California Trout, a major supporter of AB 1032. "These fish are incredibly sensitive to environmental change. By ignoring one major contributor to fish habitat degradation, the Governor has endangered the long-term health of all California wildlife."

The genesis behind AB 1032 was a 2005 law suit brought against DFG by the Karuk Indian tribe over the need to protect sensitive waterways from the harmful environmental effects of suction dredging on fish habitat. Although DFG agreed to complete an environmental assessment and revise its existing suction dredge mining regulations by July 1, 2008, funding gaps for the department have made it unable to begin this work, making it unlikely - if not impossible - for DFG to comply with the agreement by 2008. AB 1032 would have provided stopgap measures to allow DFG to further regulate mechanical gold mining activity until January 1, 2011, with the hope that additional funding would be made available in the meantime to allow it to complete its environmental assessment.

"We are dismayed that the Governor caved into special interests and failed to stand up for the fish and the Karuk people. Currently recreational gold miners are having fun at the expense of our fishery and our culture. After years of fighting to protect salmon, steelhead and lamprey from suction dredging, we are back to square one," stated Karuk Vice Chair Leaf Hillman.

California Trout and the Karuk Tribe of California were two of nearly thirty organizations that worked together in support of AB 1032.

California Trout is dedicated to protecting and restoring wild trout and steelhead waters throughout California. Founded in 1971, California Trout was the first statewide conservation group to focus on securing protections for California's unparalleled wild and native trout diversity. Among its many current initiatives, California Trout is now leading the effort to save the official state fish, which is the California golden trout.

To the Members of the California State Assembly:

I am returning Assembly Bill 1032 without my signature.

The purpose of this bill is to protect fish and wildlife from the potential deleterious
effects of suction dredge mining. Although I appreciate the author’s intent and the need
to protect our fish, wildlife, and water resources, this bill is unnecessary.

Current law gives the Department of Fish and Game (Department) the necessary
authority to protect fish and wildlife resources from suction dredge mining. It has
promulgated regulations and issues permits for this activity. Permits for suction dredge
mining must ensure that these operations are not deleterious to fish and allow the
Department to specify the type and size of equipment to be used. In its regulations, the
Department may also designate specific waters or areas that are closed to dredging.

It is unclear why this bill specifically targets a number of specific waterways for closure
or further restrictions. The listed waterways represent only a small fraction of the waters
in our State where suction dredging is occurring. The benefit or protection from such a
minor closure is negligible and supports the notion that scientific environmental review
should precede such decisions.

Sincerely,
Arnold Schwarzenegger
Add Your Comments
LATEST COMMENTS ABOUT THIS ARTICLE
Listed below are the latest comments about this post.
These comments are submitted anonymously by website visitors.