Add an Event
Newswire
Calendar
Features
Home
Donate
From the Open-Publishing Calendar
From the Open-Publishing Newswire
Indybay Feature
Publish to Newswire
Add an Event
Related Categories: Santa Cruz Indymedia | Education & Student Activism | Government & Elections | Health, Housing & Public Services
HOPE files Court papers including mention of Polymethylene polyphenyl isocyanate
by --
Tuesday Oct 9th, 2007 8:32 PM
(Oct 9) HOPE files Supplemental papers with the Court including mention of a formerly secret "inert" ingredient in the Checkmate pesticide (revealed by Santa Cruz Sentinel) of an Isocyanate. There is a remarkable overlap with the symptoms reported by 110 local residents and the symptoms known to be caused by the isocyanate. Court should issue decision by tomorrow. 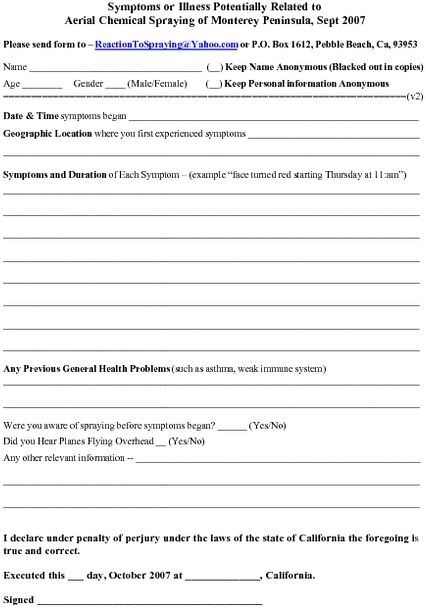 (Oct 9) HOPE files Supplemental papers with the Court including mention of a formerly secret "inert" ingredient in the Checkmate pesticide (revealed by Santa Cruz Sentinel) of an Isocyanate. There is a remarkable overlap with the symptoms reported by 110 local residents and the symptoms known to be caused by the isocyanate. Court should issue decision by tomorrow.

(Oct 8) *** TRO should be decided tomorrow before 5:pm - before spraying planned for tomorrow night. There likely will NOT be a hearing in Court, the judge may decide the issues just on the papers filed.

(Oct 2) Monterey City Council today to discuss 1. Whether to join HOPE’s suit (ask them in 4:00 session public comment to do so) , and 2. Resolution about the Spraying (ask them in 7:00pm session to include "Support for non-spraying Alternatives")

(Sept 28) HOPE files Public Records Request with CDFA & Monterey County to get information on exactly when and where the planes turned their pesticide sprays on and off.

(Sept 26) Monterey County Weekly Reports on HOPE’s lawsuit, the many people who got sick and the $140,000 campaign contribution to the Governor by the Pesticide Manufacturer (by Kera Abraham).

(Sept 26) HOPE letter to US-EPA Request to Rescind Aerial Spray Chemical Testing Exemption because LBA Moth is Not an Emergency, it is a False Alarm.

(Sept 24) California Assemblyman John Laird writes a stinging critique of CDFA’s spraying, but still does not oppose the Spraying or support non-spraying Alternatives.

(Sept 23) USDA planning to re-spray the Monterey Peninsula beginning on Oct 9th, 2007. They intend to Spray most coastal Santa Cruz cities soon after.

(Sept 19) Governor Arnold Schwarzenegger took more than $143,000 from Suterra’s owner Steve Resnick, the manufacturer of the Checkmate chemical, which is being sprayed from airplanes on our Monterey Peninsula cities. (Thanks to ArnoldWatch)

(Sept 14) Several people are seriously ill, and many others have symptoms they believe may be caused by spraying. They’ve created a Yahoo group to communicate - (NoMoreSpraying-subscribe [at] yahoogroups.com).

(Sept 12) Sprayers "miscalculated" and had to spray a 4th day in Pacific Grove.

(Sept 9th) For Evacuees: Monterey will be sprayed first tonight after 8:pm (For other times and places call !CDFA! at 800 491-1899. Lets hope their information on this is not false like everything else they tell us.)

** (Sept 9th) Navy School Professor of Meteorology Wendell Nuss calculates chemical sprayed at 500 feet above the ground can drift 2 miles from the plane in "calm" night winds. This means planes must spray no closer than 2 miles from coast. But CDFA fiercely demands to spray closer than 300 yards feet from Sanctuary.

(Sept 9th) NOAA law Enforcement staff will be "closely monitoring" the spraying tonight to see if any chemicals drift into our bay.

Sept 7th Voting for a bill to enable Spraying funding are Assemblyman John Laird and Senator Maldonado. Governor Arnold signed it. All three failed to support "Non-Spraying Alternatives" after asked this week.

* (Sept 5th) Pacific Grove City Council unanimously opposes spraying, directed City Attorney to prepare to sue to stop the spraying; and taking one step further than the Monterey Council – endorses use of less toxic alternatives. This was put on the agenda as an Emergency Item by Councilwoman Lisa Bennett.

(Sept. 4th) A.G. Kawamura Decides to Spray Starting Sunday evening Sept 9th angering many local officials who expected the delay would be meaningful enough to allow the public to get answers – not a mere 4 days.

** National Marine Sanctuary withdraws support. Spraying Permit may not be issued because of toxicity to aquatic invertebrates. Sec of Ag & USDA to "persuade" them in a Conference call Tuesday morning Sept 4. (Aug 31) (Call Congressman Farr (649-3555) to insist Sanctuary is not threatened by federal authorities.)

Spraying Delayed (for 24 hours?) by Sec of Food and Agriculture (Aug 31)

(Aug 30) HOPE prepares a viable Alternative based on Moths not flying more than 100 meters (yards) from their birthplace.

(Aug 30) Herald Biases article and omits crucial Facts on large Conference Center Meeting. They Fail to respond to HOPE letter on this.

HOPE prepares 2 pages of Questions for Conference –Moderator fails to ask even one of HOPE’s questions we spent 2 days preparing. Apparently CDFA staff removed our questions from the set given to the moderator. We gave a set to Sec Kawamura that evening. He has not replied to HOPE at all.

(Aug 20, 2007) HOPE letter to State Insisting that an Environmental Impact Report be prepared.

2. Chemical proposed for Spraying (LBAM-F) has NOT been tested in any way for harm to biota. US-EPA gave it an Emergency Exemption from testing.

3. University of California Insect Experts say the LBA moth must have been here for "a very long time" prior to this year to spread as far as it has. USDA admits LBA moth is "not spreading now."

4. There is zero (none, nada, zip) documented evidence of LBA moth harm in California agriculture or ecosystems.

5. LBA Moth has been in Hawaii for more than 100 years – Their Agricultural Agency does NOT consider it a "significant pest"!

6. LBA Moth has been in New Zealand for 100 years alongside the Monterey pine tree farms – and they do not consider it a pest. Yet CDFA’s John Connell constantly raises the fear that we would lose our native Monterey pine forests.

1. Instead of Spraying people in cities with "Slightly Toxic" chemicals, the state can hang Sticky Pheromone "Johnson traps" as they do in other areas. Most LBA moths never fly more than 100 yards (meters) from where they are born making sticky trapping (or blacklight traps) around the few sites they are fairly found easy to do and much safer than spraying chemicals.

2. Male Moths can be irradiated to make them sterile, then released - just like they do for the Medfly.

What you can do –

* Call Supervisor Dave Potter (647-7755) to have him agendize halting our County Agriculture Commissioner (Eric Lauritzen) from Issuing a Spraying Permit.

* Progress Chart (Who’s on Board)

US Dept of Agriculture page on Light Brown Apple Moth

Pesticide Database explaining in context what "Slightly Toxic" means to our health.

Other groups working on this issue: 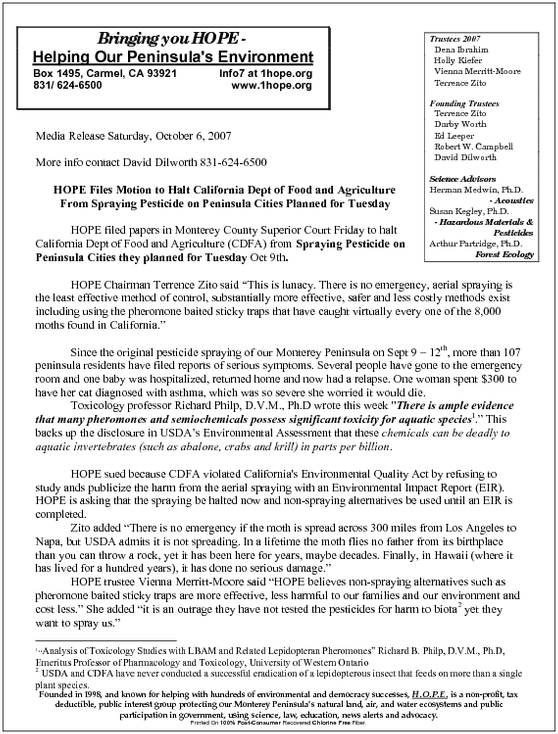 Download PDF (217.1KB)
http://www.indybay.org/newsitems/2007/10/0...
Add Your Comments
LATEST COMMENTS ABOUT THIS ARTICLE
Listed below are the latest comments about this post.
These comments are submitted anonymously by website visitors.