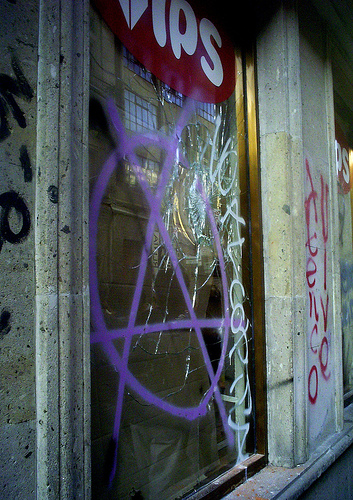 Thousands march in Oaxaca to mark anniversary of 1968 student massacre

On Tuesday 2nd October between 2-3,000 students and members of the local popular resistance APPO ( the Popular Assembly of the Peoples of Oaxaca)marched from the edge of Oaxaca city centre to the Zocalo (central square).

Among them were around a hundred masked youth who extensively spray painted walls on the route with slogans to commemorate the 1968 student massacres, condemn the corrupt local governor Ulises Ruiz Ortiz, call for the release of political prisoners and a boycott of local elections this Sunday.

In 1968 in Mexico City, just before the Olympics 200-300 demonstrating students were massacred by the security forces with the complicity of the CIA.

Before the march some local youth had acquired spray cans from a local shop - 2 were arrested as a consequence according to local media. The march started from the Fuente de las 7 Regiones around 2 miles from the centre with no police or security forces present.

It was made up of several blocks - the masked up and more radical at the front, followed by the communist/Marxist red flag waving contingent, with mainly teachers at the back.

The march progressed with different representatives taking turns on the megaphone whilst the hoodies and balaclava clad liberally adorned the colonial archictecture. Most notably the Justice Ministry and the Governor´s Palace on the Zocalo were redecorated. By the following morning, however, most of the redecoration had disappeared under the brush strokes of the super-efficient clean-up squads whose work can be seen on walls all over the city, blotches of colour designed to obscure the reality of murder, torture, detention and intimidation that Oaxaca has had more than its fair share of recently.

On reaching the Zocalo speeches were given affirming that resistance is very much alive in Oaxaca city and Oaxaca state but the crowd quickly dwindled as the sun went down. According to local media a further 6 people were arrested leaving the demo.

Schools had been closed all over Oaxaca state as teachers called a two-day strike on Monday and Tuesday.

Note: Anarchists also took part in demonstrations on October 2, 2007, in Monterrey and Mexico City. 12 people were arrested in Mexico City after some businesses were damaged and bottles and rocks were thrown at police.

Photo gallery here:
http://mexico.indymedia.org/tiki-browse_gallery.php?galleryId=165
Add Your Comments
Support Independent Media
We are 100% volunteer and depend on your participation to sustain our efforts!