by Mike Rhodes (MikeRhodes [at] Comcast.net)
The Fresno City Council voted to put homeless people into tool sheds today. The funding for the proposal may be in jeopardy because they did not have the 5 votes needed to fund the project. One thing the proposal did, however, was to get just about everyone to agree that Fresno needs to develop a long term plan to address homelessness. 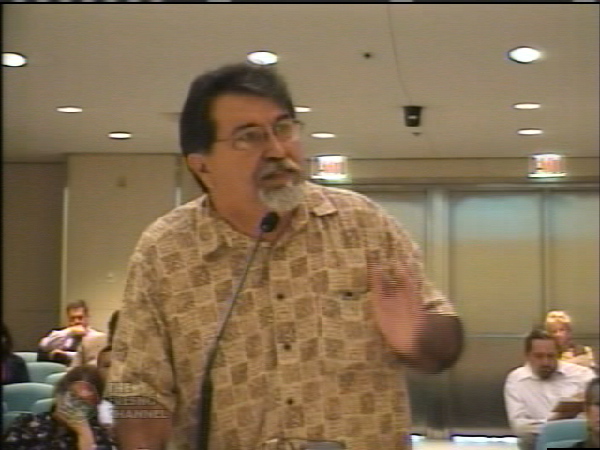 It is the funding issue, however, that may doom the project. Immediately after the 4-3 vote, the City Clerk announced that it would require 5 votes to approve funding for this project. City Council member Jerry Duncan, sent me an email after the vote clarifying what happened. Duncan wrote “There was approval to enter into the contract but no funding to do it. (The) City manager now needs to see if he can find a source of funds already budgeted. If he can, it will only require 4 votes to get it approved.” Gregory Barfield, Council member Cynthia Sterling’s aide, agreed that funding for the project was not approved, writing “there needed to be 5 votes to fund the project, and that did not happen.”

The proposal to build 44 tool sheds sparked a significant debate before the vote was taken. About a dozen community members addressed the council on this issue. The first speaker, Kyle Schmidt said he was “concerned about using these pre-fabricated sheds that are for storage rather than for living. I believe many of them come with a disclaimer that they are not for habitation, and that could be a legal issue.” Schmidt also pointed to homeless communities in Atlanta (the Mad Housers) and Portland (Dignity Village) that included homeless people in the planning. Schmidt said “one thing that sets those apart from this approach is that the homeless have been involved through the process in the planning and in the construction of the dwellings. So, they really buy into this as where they’re going to stay, not just a concentration camp - where there is security watching their every move.”

Al Williams, a homeless man from the Roeding Park area, said “there is lots of money being spent, but it is accomplishing zero. It is making some people rich.” Williams said “what we need is for money to be spent to give a person a job, to get a person a house, and we can take care of ourselves.” He opposed the proposal to put homeless people into tool sheds.

The next speaker was Jose Luis Barraza from the Center for Independent Living. Barraza said “the fact is that living in a tool shed is not the answer, it is supportive housing.” Speaking about disabled homeless people, Barraza said “that they do not need to be on the streets, they need a home, they have a right to live independently, and ladies and gentlemen this (tool sheds) is not the answer.”

After community input, the issue returned to the Dias. Cynthia Sterling, who represents the district where the tool sheds would be located, said “to extend the process without actually taking the opportunity as a city to look at some of the solutions that have been brought before us - I have a drawer full of information on every project throughout the nation concerning the homeless and what people have done for permanent facilities for them and how they went about doing it - but it seems to keep falling on deaf ears.” Sterling said that instead of considering the tool sheds the council should discuss converting abandoned hotels and motels into affordable housing. She also suggested establishing a “Homeless Tsar” that would oversee developing plans to address the homeless issue.

City Council member Larry Westerlund made the motion to support the tool shed proposal. He said that the proposal “is not the answer (to homelessness). It is a stop gap at best and unfortunately our stop gaps have been our permanent answers.” Westerlund said that a November 7 meeting with the County of Fresno on the homeless was critical in addressing this issue.

Jerry Duncan, who represents northeast Fresno, said “we do have a real complicated problem here and our problem is complicated by a fundamental fact - that we do not have a community strategy in managing this problem. We have the city which goes one way, the county which goes its way, and some incredible nonprofit groups do the best they can. The reality is that we’re not all working together, we don’t have our act together, we’re not working together. Until we do we’re really going to struggle with issues like this not knowing what to do and how to go about doing it.” Duncan seconded the proposal to establish the tool sheds.

Duncan asked assistant City Manager Bruce Rudd what the plan was to get the homeless to move into the tool sheds. Rudd said that “the plan is that once this goes into place, we will start looking at the Monterrey street bridge and G street encampments. The G street encampment would be the first location in which we would go out with the county department of health and human services to encourage people to take advantage of what I refer to as the south campus. At that same time, we will be providing notice that they are on city property and we will go through the same process we have been directed to go through as a result of the court ruling as far as how we deal with encampments. They will be given every opportunity to make that choice, but the first location that will be identified for removal of the encampment will be the G street location. Those folks who are there will be given every opportunity to take advantage of moving to the south campus.”

Duncan asked “if they choose not to move, what are we going to do?” Rudd responded “then as that area is cleaned out then we will start focusing on the Monterrey street bridge area.” Rudd went on to say that they wanted to see how much “voluntary participation” they get. If homeless people do not move voluntarily into the tool sheds Rudd said they had ordinances, including a pending “no camping” law that they will use to force the homeless people to move.

Rudd said the capacity of the “south campus” would be 88 people. Duncan pressed Rudd on this number, saying there are hundreds of homeless people in the downtown area. “What happens when that fills up,” Duncan asked. Rudd, with an unusual smile on his face said “based on my discussions with both Rev. Arce and Mr. Connell (the executive director of the Poverello House), they don’t believe and I don’t believe that camp is going to fill up completely, voluntarily.”

City Manager Andrew Souza said the goal of the November 7 meeting with the county “is not to just sit around and all talk about this but to get a firm commitment to implementation to the ten year plan (to end homelessness) and see how that document works, how that plan will work, and who are the appropriate community stakeholders involved. We are trying to do a lot of behind the scenes work in preparation for that meeting so that on November 7 we walk out of there . . . with a very firm game plan on how we are going to move beyond just the temporary solutions.” Souza said he saw the tool sheds as a temporary fix but that he realized the goal was to look for long term solutions.

Blong Xiong, the City Council member who represents the west Fresno district (north of Olive), asked Souza about the Homeless Tsar. Souza said “if we are going to engage in the level of solution that we are talking about, including the ten year plan to end homelessness, we’re going to have to have a dedicated staff person whose sole purpose for being here is to address the issue of homelessness.”

City Council member Mike Dages asked if we were still on the 9:30 AM item. It was 3 PM, which gives you an idea of how long these meetings can sometimes last. Dages said the City of Fresno has $4.1 million in this year’s budget to address long range homeless issues. He asked the city manager what was being done with that money. Souza said he would get him a status report. Dages said “I have a real problem with the idea of creating a tool shed, a shed like I have on the side of my house, for people to live in. I wouldn’t ask my relatives to live in it and I have a real difficult time asking the homeless to live in it. I think the quality of the city really depends on how they treat their poor, their working poor, and their homeless. I don’t think we are treating them with respect, in my personal opinion. We are struggling with affordable housing, we are struggling with this homeless situation, and it just shows to me a lack of respect by the City of Fresno.”

Councilmember Henry T Perea said that he would support the plan if it was a part of a bigger program. “If there was a plan to say OK, we are going to take this money (the $4.1 million in the city budget for homeless issues) and build transitional housing, provide some real opportunity and some real hope for these people and we had a plan that said this transitional housing will be built in the next year or two and this (the tool sheds) was going to be a stop gap measure until we can get these people into those homes, I could probably go for it. The problem is - we are not doing that.”

The vote was 4-3 with Duncan, Westerlund, Xiong, and Calhoun voting yes. Perea, Sterling, and Dages voted no.

###
END_OF_DOCUMENT_TOKEN_TO_BE_REPLACED
Add Your Comments
Comments (Hide Comments)
§start
by pd
I know some people who live in huts like those, and homeowners rent them out to students for fairly high amounts.

It is a solution for a few people. Those would be horrible for certain people, and the key is probably the shared facilities outside the huts, if they don't have running water. At roomming houses, many can share a bathroom and kitchen, but it seems like 30% of people at my house couldn't clean up after themself and made life difficult. Also, there should be a security guard to protect everyone else against any abuser who slips in there. This factor is what brought down the car camping area by the bay in Berkeley - a rapist moving in and attacking women.
However, just getting a locking door and a roof against the rains (which start soon!) solves a good chunk of problems that homeless have.

Here is a good documentary (hour long) about how quite a few with credit debt might be joining those folks under the bridge.
http://cryptogon.com/?p=1401
Add a Comment
Support Independent Media
We are 100% volunteer and depend on your participation to sustain our efforts!