Add an Event
Newswire
Calendar
Features
Home
Donate
From the Open-Publishing Calendar
From the Open-Publishing Newswire
Indybay Feature
Publish to Newswire
Add an Event
Related Categories: San Francisco | Labor & Workers
10/21 SF Forum-Israel, South Africa, Apartheid and The Labor Movement
by Labor Video Project
Tuesday Oct 2nd, 2007 9:07 AM
On October 21, 2007 at New College in San Francisco, a forum will be held on the relationship
between apartheid in South Africa and Israel as well as why union around the world are
organizing and supporting labor actions against the policies of Israel. 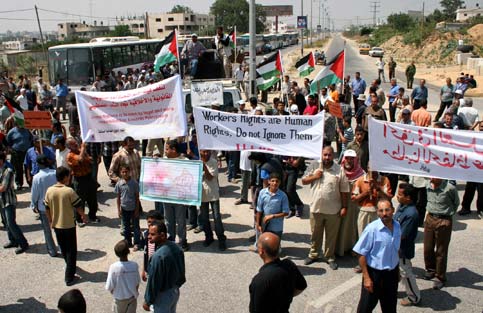 $5.00 Donation Requested (no one turned away due to lack of funds)

There is a growing movement worldwide among labor to take direct action against the policies of Israel on the Palestinians. This forum will look at the relationship between Israel and South Africa and why trade unionists in South Africa and Canada are taking action to support a economic boycott of Israel.
We will also look at the history of the AFL-CIO and it's relationship with Israel.

The Wisconsin Plan: From Welfare to Work? (13 min) 2007
by Sawt el-Anel/The Labor’s Voice
Israel’s welfare-work experiment “Wisconsin Plan” has entered its
decisive phase, as the two-year pilot period is about to end in June
2007. This film shows how this plan is causing the social and
economic problems on Palestinian people in Israel.
laborers [at] laborers-voice.org
http://www.laborers-voice.org

the Mall by Video 48
An inside look at the living conditions of Palestinian workers inside Israel. Their home is a mall.
http://www.odaction.org/wac

The Alley (14 min) 2007 by a-films/RJI
From Occupied Palestine, this film explores aspects of the current
political economy of Balata Refugee Camp in Nablus. Perspectives
from this hard-hit community include the insights and voices of
vegetable sellers and other residents of Balata, such as those
forced by the harsh conditions of Israeli occupation to seek work in
a sweatshop at the edge of the camp.
a-fils[at]riseup[dot]net


USA vs Al-Arian (98 min) 2007 by Line Halvorsen
This is the story of the targeting by the US government of
Palestinian American professor Dr. Sami Al-Arian at the University
of South Florida in Tampa. Sami who was also a member of the NEA
United Professors of Florida received their support against the
pressure to fire him after he appeared on Fox∂s Bill O'Reilly show.
The film shows a personal story of a family living in a society
where fear of terrorism has resulted in increasing stigmatization
and discrimination against Muslims. For years, Nahla Al-Arian and
her children have been fighting to prove the innocence of husband
and father Sami, a Palestinian refugee, and civil rights activist,
who has lived in the USA for more than thirty years. In 2003, Sami
Al-Arian was accused of giving material support to a terrorist
organization and held in solitary confinement for over three years.
His six-month trial ended without a single guilty verdict. The
failure to convict Dr. Al-Arian was seen as a stinging rebuke for
the federal government. While the Bush administration considered
this a landmark case in its campaign against international
terrorism, Professor Sami Al-Arian claims he has been targeted in an
attempt to silence his political views. Because the jury hung on
some of the counts, however, Dr. Al-Arian remained in jail as the
prosecution threatened to retry him.
Laila Al-Arian, daughter of Sami Al-Arian will be attending.
http://www.usavsalarian.com