Add an Event
Newswire
Calendar
Features
Home
Donate
From the Open-Publishing Calendar
From the Open-Publishing Newswire
Indybay Feature
Publish to Newswire
Add an Event
Related Categories: International | San Francisco | Anti-War
Solidarity Action(s) for Burma in SF 9/28 at Noon (reposts)
by Ang Su
Friday Sep 28th, 2007 10:39 AM
Call from Rebecca Solnit and Marisa Handler for action in SF at Noon in solidarity with the people of Burma, 12 Noon, Friday, Sept 28, Protest at Chinese Consulate - 1450 Laguna Street at Geary in San Francisco (near Japantown), and a list of things you can do from anywhere. 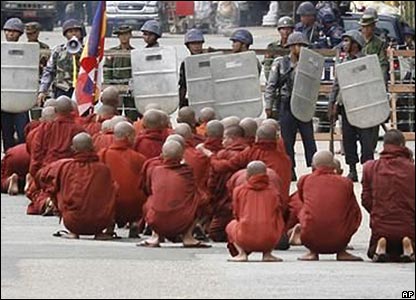 12 Noon, Friday, Sept 28
Protest at Chinese Consulate - 1450 Laguna Street at Geary in San Francisco (near Japantown)
Try to wear red (in solidarity with the maroon-robed monks), make signs, prepare to do both sitting and walking meditation.

Please come join us in a peaceful protest in solidarity with the people of Burma.

This week, tens of thousands of the Buddhist monks and nuns of Burma stood up with other citizens against the military dictatorship that has throttled their country for decades. Their actions have been peaceful, brave, bold, beautiful and deeply inspiring for the rest of us, and they could be the beginning of the liberation of a sad country. Or they could lead to massacres, prisons, repressions, and more. Global support matters at this crucial moment. Already the country's two major cities are under curfew, gatherings of more than five are forbidden, armed soldiers are on the streets, and the situation is tense. Nobel Peace Prize winner Aung San Suu Kyi was greeted by thousands of monks in an early demonstration, her first public appearance in years, but is rumored to have been taken to a grim prison.

The major supporter of Burma's ruling military junta is China, and China is in a delicate position as it tries to polish its global image in preparation for the Beijing Olympics. This is a key opportunity to pressure China, particularly as the United Nations prepares to meet in New York. So we invite you to join us Friday at noon at the Chinese Consulate, 1450 Laguna Street at Geary in San Francisco (near Japantown). Try to wear red (in solidarity with the maroon-robed monks), make signs, prepare to do both sitting and walking meditation. This will be a principled nonviolent protest, with the aim of emphasizing where the power of Burma's resistance lies--in the moral authority of those who have devoted their lives to peace, and in the courage of its people. We are not looking for confrontations with the police or arrests and if asked to stop sitting will walk. We will demonstrate for an hour and are prepared to return, as the situation develops.

First, there are several online petitions that you can sign. Here are two:

-The US Campaign for Burma is asking people to collectively gather
88,000 signatures from around the world, calling on Chinese President
Hu Jintao to compel Burma towards valid national reconciliation. Sign
the petition by going to:
http://www.democracyinaction.org/dia/o...on.jsp

-You can also email the EU President to strengthen the EU position on
Burma, at
burmacampaign.org.uk/eu_action.html

Second, you can follow the news online. News agencies track the
stories that get the most coverage, and by reading about Burma online,
you increase the chances that the story will continue to receive
international attention.
The BBC has good coverage: http://www.bbc.co.uk, as
does
The Irrawaddy, a local source on the Thai-Burmese border:
http://www.irrawaddy.org

Third, you can donate money to advocacy campaigns.
The org I ( local bay area musician/ community artist /activist, who recently
travelled to south east asia - no time for permission to repost name) recommend is:
http://www.badasf.org
and secondly:
http://www.uscampaignforburma.org 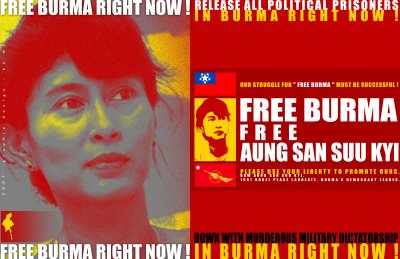 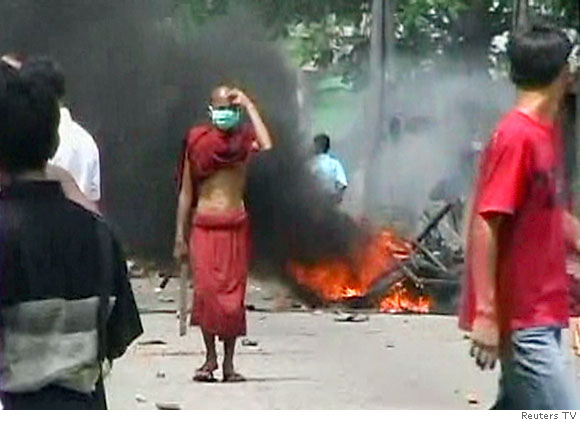 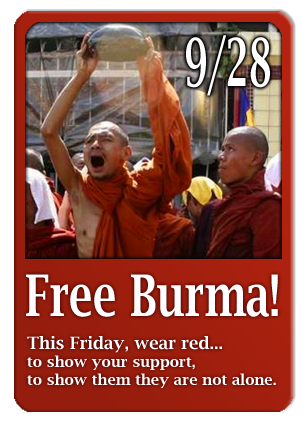 Story about Burma solidarity on the internet and 9/28 wear red day:
http://blog.dtelepathy.com/social-networking/online-audiences-accept-burma-with-open-arms
Add a Comment
§Excellent idea
by Dwayne
Friday Sep 28th, 2007 2:31 PM
Please give us more notice next time, though
Add a Comment
§Photo of protesters on Market Street today
by Robert B. Livingston (gruaudemais [at] yahoo.com)
Friday Sep 28th, 2007 11:31 PM 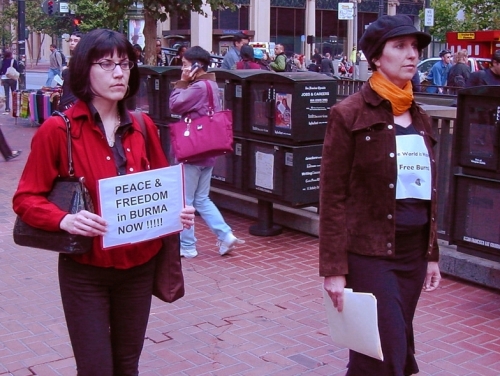 I snapped this photo of two protesters on my way to Critical Mass. Have to admire them!
Add a Comment
§a single step
by susan
Sunday Dec 2nd, 2007 5:50 PM
You may notice these women are resolved and peaceful. Walking a single step for peace is the beginning. The next, karmic act of protest f may be a simple as someone noticing, thinking, agreeing. Non action is not an option any more
Add a Comment
Support Independent Media
We are 100% volunteer and depend on your participation to sustain our efforts!