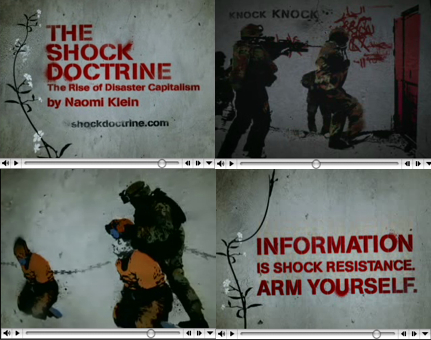 Naomi's Klein's current book tour should provide some exceptional discussion regarding the current course of globalization, US foreign policy, and the exploitation AND implementation of global crises over the last 4 decades.

Klein was able to debate Alan Greenspan on Monday's Democracy Now program, which was reminiscent of Amy Goodman's opportunity to take apart Bill Clinton just before he left office in 2000. Greenspan may not know it, but he was just brought down to earth by a journalist who isn't willing to accept the neo-liberal babble of "the High-priest economist", who many will claim had led the way for corporate greed to run amok world-wide. Perhaps more appropriately it could be termed "Anglo-American Voodoo Economics", seeing as his circle of mumbo-calamity magicians and neo-cons have managed to "possess" every US administration since Ronald Reagan.

Youtube clips have already been posted which have broken down the segment so far down to 2 short topics...

And the entire segment here:

Excerpt from the XL terrestrials.org report on Naomi Klein and her collaboration with Alfonso Cuaron:

Klein’s Latest “Shock Doctrine” Should Wake Anyone Still Asleep In The Global Fire !

"Making stops in San Francisco 9/26 and Oakland 9/28, Naomi Klein is on tour with her latest precision analysis “The Shock Doctrine”. Could anyone still sleep through this fire, after absorbing her assessments of free market feeding time in neo-liberal overdrive over the last four decades?! ... Our first impression is that this has potential to completely alter the wearied and endless debates between economic and social systems and put everyone on the same page: no longer questioning, no longer demanding, but actually running for the exits and the alternatives.

Also very interesting to note from a Spectacle analysis, the use of a rising star of cinema, Alfonso Cuaron (Children Of Men), as a vehicle to advertise for information through perhaps the deeper and introspective medium, the book. In other words a profound new move in the mass media tactical arts, a jujitsu act going backwards against the flow of "Spectacle 2.0", the net’s current torrent towards a barrage of endlessly flowing snippets of fact and fiction, diversion and bit-dreams, the next connect to nowhere. "
Add Your Comments

§Mr. GreenSpin tries to avoid blame for $ Meltdown
by DLi
Tuesday Sep 25th, 2007 5:29 PM
Alan GreenSpin's latest efforts to deflect blame for the current financial melltdown of the Evil Empire are only half-truths. The harsh criticism on te Bushed NeoCONs on their profligate "Deficits Don't Matter" policies are right on the mark. However, during the early period of this malfeasant Regime, Mr. GreenSpin himself was an enthusiastic supporter of the same Voodoo economics that he now decries! In fact, with the Trillion-Dollar War of Aggression on Iraq, plus his lunatic money-printing binge, as well as his Billions of tax give-away to the top 1% of U.S. income earners, America' KGB(king george bush) is actually pushing,

"Greenspan is a lifelong devotee of Ayn Rand, whose books The Virtue of Selfishness and Atlas Shrugged are the bibles of free-marketeers. I actually loved them myself. When I was 11. I grew out of them, but Greenspan never did.

In any case, Greenspan may not have always followed the “rational” part, but he’s clearly nailed the “self-interest” part. It was in his narrow self-interest to cheerlead for Bush in 2001, so he did it. Now the country — and most of the world — has turned on Bush, and Greenspan sees it is in his self-interest to distance himself from Bush.

His mentor would be proud."


And a very fun quote from Klein's interview with John Cusak: