Add an Event
Newswire
Calendar
Features
Home
Donate
From the Open-Publishing Calendar
From the Open-Publishing Newswire
Indybay Feature
Publish to Newswire
Add an Event
Related Categories: Santa Cruz Indymedia | Government & Elections | Health, Housing & Public Services | Police State & Prisons
Zooming At You: Public Assembly Ban in City Parking Lots: 8:30 AM City Hall 9-27
by Robert Norse (rnorse3 [at] hotmail.com)
Friday Sep 21st, 2007 10:33 AM
The Downtown Commission will be on the business end of staff and police "persuaders" come next Thursday September 27th, when the SCPD returns with thin stats to push through the Coonerty "Parking Lot Panic" Law. Listed below are the phone numbers of Downtown Commission members (City Hall doesn't have their e-mails for some reason). Call them and tell them to vote no or at least wait until we can get more public records. 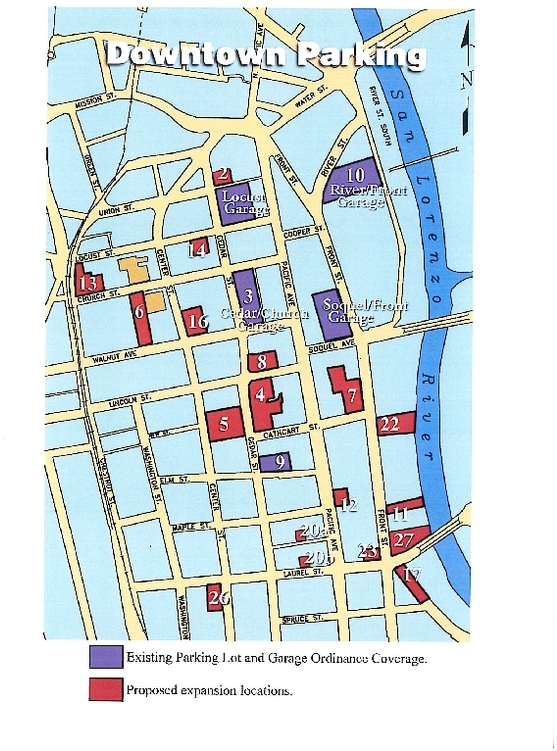 For some of the grim prior history of the attempt to constrict public spaces for the convenience of the police and city workers see http://www.indybay.org/newsitems/2007/ 09/06/18445965.php .

The following are the phone numbers of the Downtown Commissioners who should be available to the public. If they're not, ask them to delay any decision until they actually meet with you.

Once they pass it, it'll slide through City Council like shit through a goose. If they don't, Ryan Coonerty may have some trouble removing these public spaces "in the interests of security".

I'm also attempting to upload a map of City parking lots affected, the staff report, the SCPD's chart justifying this parking lot public assembly ban, and a brief summary of restrictive laws in other cities re: parking lots and garages.

I shall comment on the SCPD's figures in a future comment. The problem, of course, is that there's no chance to get independent or even more extensive police records if the Downtown Commission acts to forward this recommendation to City Council (even without as a neutral matter).

Earlier in the summer, the Downtown Commission turned down the SCPD and Parking Authority's request because they declined to provide any new figures. Now they are providing a few (a very few). This might cause publicity-sensitive Commission members to pass the buck to City Council where, as we know, anything the SCPD wants, the SCPD gets.

So CALL MARLIN and/or DOWNTOWN COMMISSIONERS and ask them to delay any final action on this matter until there's time to get some real stats and check the ones we're given. And start figuring out creative protest strategies to stop this latest police power grab. 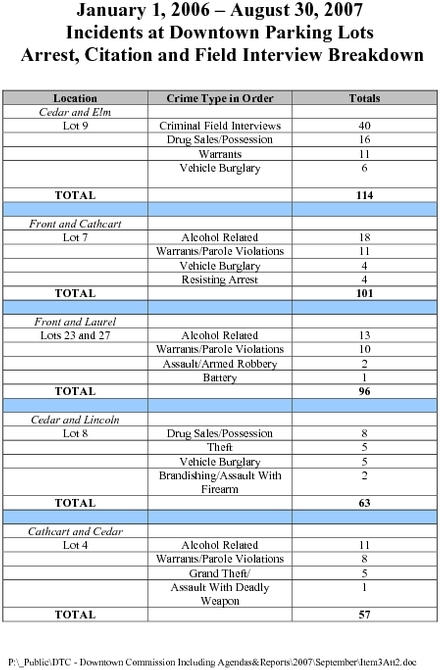 Download PDF (70.8KB)
The police stats that are being presented to justify this massive seizure of public space.
§Staff Report
by Robert Norse Friday Sep 21st, 2007 10:34 AM 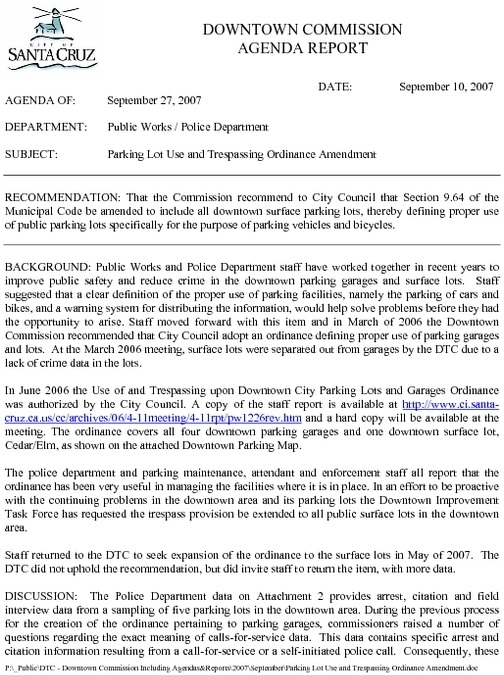 Download PDF (92.0KB)
The folks pushing for this new law wrote this.
Add Your Comments
LATEST COMMENTS ABOUT THIS ARTICLE
Listed below are the latest comments about this post.
These comments are submitted anonymously by website visitors.