by Mike Rhodes (MikeRhodes [at] Comcast.net)
The attacks against Fresno’s homeless continue. This incident involves a rogue officer from the Union Pacific Railroad who, I am told, slit open a homeless persons tent, roughed up one homeless man, and took his tools. The full story is below. 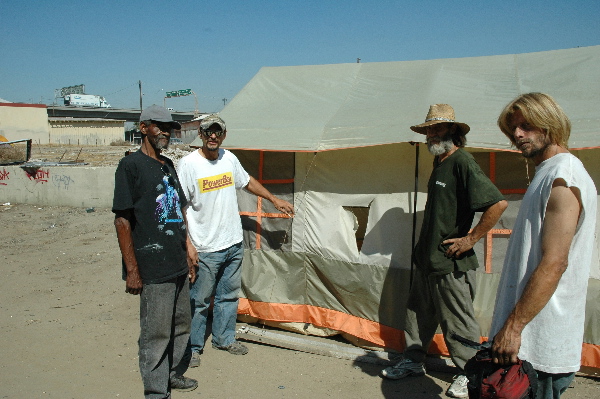 Geno, Steve, Charles, and Jerry were at a tent near the railroad tracks, not far from San Benito and H street when a large white SUV drove by. They say the vehicle drove by all of the tents that the homeless live in (next to the RR track) and stopped at the last one in the row. An officer, later identified as officer Velarde (badge #477 with the Union Pacific Railroad Police), got out of the vehicle and demanded that whoever was in the tent come out. There was nobody in the tent. The four homeless men (next door) told Valarde that there was nobody in the tent. Velarde used a megaphone to demand that the person in the tent come out. Velarde then took out a knife, drew his gun, and slit open the side of the tent. There was nobody inside.

Geno told me he jumped up and said “hey, you can’t do that, that’s private property, we have a restraining order against the city and you can’t harass us like this.” Geno said Velarde holstered his gun and pulled out a can of mace and began shaking it. Velarde warned Geno and the other three men not to come any closer. Geno told him they were ten feet away and had no intention of coming any closer.

Velarde picked Steve out of the group and ordered him to move closer to him. The officer grabbed Steve, ripped off his bag (the kind that wraps around your stomach), and shoved him into the SUV - hitting Steve’s head on the top of the door. Steve and Geno said the officer then pulled him back and shoved him into the window of the SUV. Steve was handcuffed (very tightly according to Steve), and issued a citation for trespassing and loitering. Steve said that tools he had in his bag were not returned.

Geno said officer Velarde told him that “this is a verbal warning. You guys have until tonight (Tuesday, September 18) to get your stuff out of here.”

This attack by a Union Pacific officer follows a long series of attacks against the homeless in Fresno. There is a preliminary injunction against the City of Fresno and Caltrans because they were taking and immediately destroying homeless peoples property. A Federal court judge had to order the City of Fresno and Caltrans to stop violating homeless peoples constitutional rights.

Does Union Pacific believe they are above the law? Will they be back this evening to destroy this homeless encampment? Is Union Pacific operating on their own or are they proxies for the city in a tag team attack on the homeless? If these attacks continue, will legal representatives stand up and defend these homeless peoples rights? 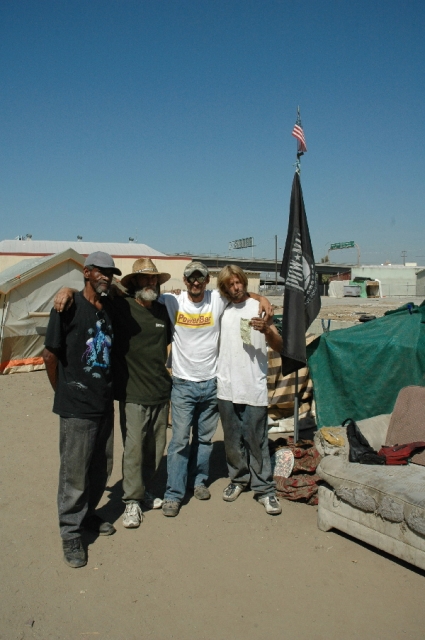 original image (600x902)
Charles, Geno, Jerry, and Steve. Steve is holding the citation for trespassing and loitering given to him by the Union Pacific private police. Photos by Mike Rhodes

END_OF_DOCUMENT_TOKEN_TO_BE_REPLACED
Add Your Comments
Support Independent Media
We are 100% volunteer and depend on your participation to sustain our efforts!