by Camille S.
To mark the 6th anniversary of the terrorist attack on September 11, 2001, the Northern California 9/11 Truth Alliance held a two day festival on September 10 and 11th at the Grand Lake Theater in Oakland, CA with films, talks and a presentation by architect Richard Gage, AIA, founder of Architects and Engineers for 9/11 Truth, all presenting a critical examination of the events of 9/11. 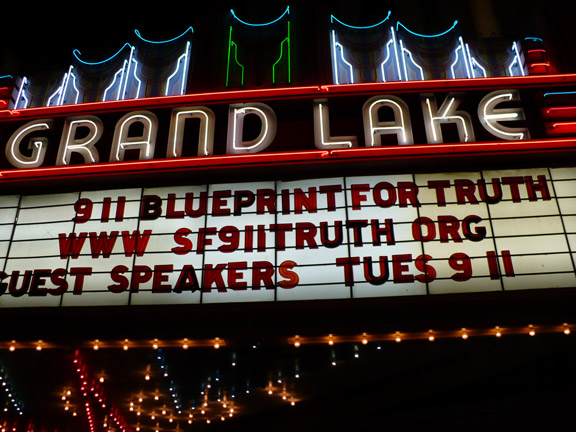 The two day event, hosted by "Guns & Butter's" Bonnie Faulkner, was well attended with hundreds of people coming in and out during the day and evening to watch a series of films that presented a different perspective to the official narrative of what happened on September 11, as well as to hear discussions by Bay Area 9/11 Truth activists who spoke on various topics. The films and speakers were then followed by a presentation by keynote speaker, architect Richard Gage who discussed evidence that the buildings were brought down by controlled demolition to a sold out crowd at the 500-plus seat main theater.

The event opened with a commemorative to the victims of 9/11 called "Remembrance" by Janette MacKinley, a 9/11 survivor, mother and artist whose condo was directly across from the twin towers when they were hit. MacKinley related her experience of the events of that day and emphasized the need to heal from the psychological trauma of America's own "Shock and Awe" event. MacKinley, with her friend and art collaborator Nicholas Sikelianos, brought on stage a five-foot bamboo representation of the twin towers in which Janette did a live presentation of the Japanese flower-arranging art of Ikebana, weaving green and red bamboo shafts connecting the two towers together.

Films shown at the festival were "Hijacking Catastrophe: 9/11, Fear & the Selling of American Empire" which examines how a radical fringe in the government has used the trauma in the terrorist attacks of 9/11 to advance a pre-existing agenda; "9/11 Press for Truth" which documents the "Jersey Girls" call for a 9/11 investigation and their betrayal by the 9/11 Commission; "We Were Also Killed on 9/11: First Responders" featuring firemen and other 9/11 first responders and the serious health problems they are experience due to their exposure to the dust on the pile; "'Hasta La Victoria Siempre!' with William Pepper," which presents an international human rights lawyers pursuit for justice; and "9/11 Mysteries Part 1: Demolitions" by Sophia Shafquat and Brad Waddell, which examines the forensic evidence that demolition brought down the buildings.

Three new films were also introduced at the festival including "Let's Get Empirical" by Ken Jenkins which features David Ray Griffin discussing his latest book "Debunking 9/11 Debunking"; "Zeitgeist," a critical look at propaganda techniques used throughout the ages; and a new dramatic feature film called "The Reflecting Pool" which tells the story of a 9/11 family member and a journalist pursuing the truth as to what happened on 9/11. This film was followed by discussion with award-winning filmmaker Jarek Kupsc, producer Jodie Baltazar, and critically acclaimed actor Joseph Culp.

In between films were analysis and discussion by authorities in the 9/11 Truth Movement including Mickey S. Huff, a professor of history and critical thinking at Berkeley City College, and founder of the Media Education Foundation who discussed "Hijacking Catastrophe." Mickey spoke on how populations are swayed through propaganda and fear. He also examined the issue as to why many progressive journalists and editors were reluctant to examine 9/11.

Other speakers included Ken Jenkins who discussed his latest film "Let's Get Empirical," Dr. Paul Rea on "9/11 Press for Truth," and Jim Hoffman who giving a detailed analysis of evidence for demolition in "9/11 Mysteries."

The highlight of the two day event was the presentation "9/11: Blueprint for Truth — 130 Architects and Engineers Examine the Evidence," by architect Richard Gage, AIA, a 20-year architect who worked on numerous steel-framed buildings, who makes a strong case that the buildings were brought down with controlled demolition.

Grand Lake Theater owner and long-time community activist Allen Michaan, introduced Gage and spoke about why 9/11 was the key issue to stop the war. "911 truth is the achilles heel of the administration and when the truth eventually emerges into the mainstream news as is slowly happening these criminals will quickly be removed from office and face prosecution," said Michaan.

Gage starts his presentation by introducing people to his background as an architect and proceeding to make his case for a need for a new investigation based on the irregular collapses of three World Trade Center buildings, including Building 7, a 47-story high-rise, in a 1:45 min Powerpoint presentation. Some of the evidence Gage presented went into the evidence that a explosive incendiary device called Thermate was used to cut the steel beams of the World Trade Towers, explaining that it gives off key by-products like sulfur and magnesium and would account for the molten iron which burned hot under the twin towers and WTC Building 7 weeks after the attacks.

Gage explained how physics would not account for the virtually free-fall collapse of all three buildings as it violates Newton’s Law of Conservation of Momentum. The prevailing theory by by NIST and FEMA is that the buildings feel down because of weakened trusses due to fire causing "progressive pancake collapse," However, according to Gage, this doesn't explain how the buildings could fall at free-fall speed by taking into account this law. Gage: "through the path of greatest resistance – at free-fall speed — the columns gave no resistance."

Gage also discussed eyewitness testimony of first responders seeing flashes and hearing explosions and presented other incongruities in the official story. "What we need is a new unimpeachable investigation, with supeaona powers, as to what really happened that day," said Gage. "The 9/11 Commission could not be considered an unimpeachable investigation." He encouraged the public get over the fear, talk with friends and colleagues and call their representatives to demand a new investigation.

His conclusion was followed by a rousing standing ovation from the audience and a lengthy Q & A session.

Carol Brouillet, founder of the Northern California 9/11 Truth Alliance, and who was tabling at the event, had this to say about the No. California 9/11 Truth Alliance and Richard's presentation: "People show up, out of the blue, at our meetings and offer us their amazing gifts — journalists, film makers, researchers, professors, artists, musicians, architects. Richard was one of them whose life was transformed by a talk by David Ray Griffin and was inspired to help with his unique architectural background to lend more credibility to the movement. His perseverance, energy, and sheer hard work has helped all of us and casted a larger light on some of the most critical suppressed facts surrounding 9/11. It was a delight to see a full house, knowing how much work Richard, and the many, many others put into promoting, and organizing the Film Festival. it was a tremendous success on multiple levels."

Judy Shelton, an activist and volunteer for the event commented that "the energy was wonderful and there's a sense of something beginning to break around 9/11."

"People who are on the fence about this issue are going to be convinced. It just solidified the facts. The evidence is irrefutable," said Diane Ferchel, a native Californian who is now living in Ecuador. 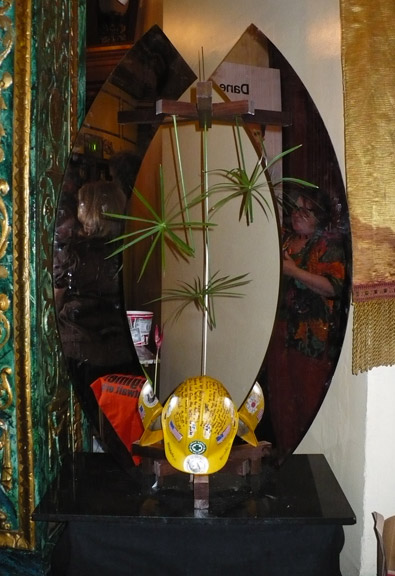 Janette MacKinley does Ikebana on stage
END_OF_DOCUMENT_TOKEN_TO_BE_REPLACED
§Vee at the Grand
by Camille S. 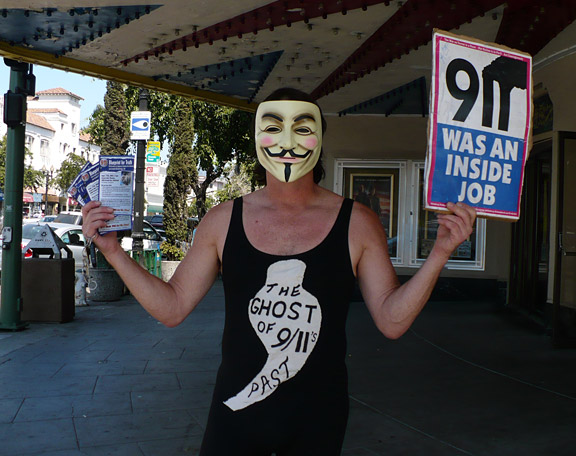 Vee as the ghost of 9/11 past
END_OF_DOCUMENT_TOKEN_TO_BE_REPLACED
§Bonnie Faulkner
by Camille S. 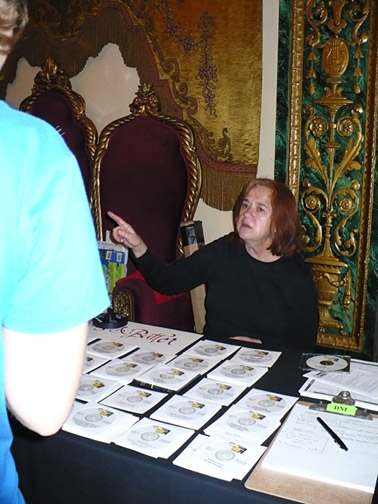 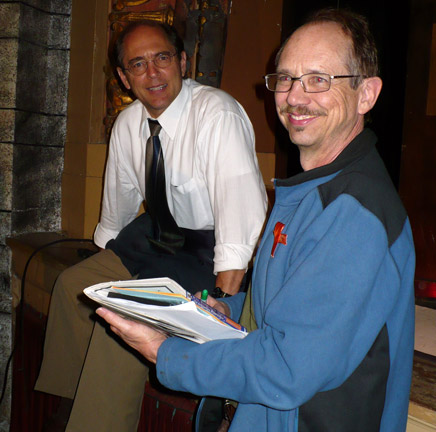 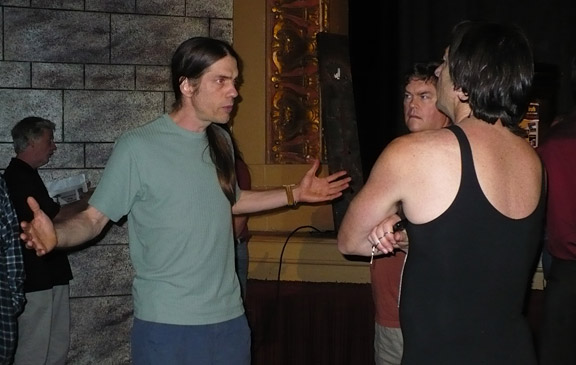 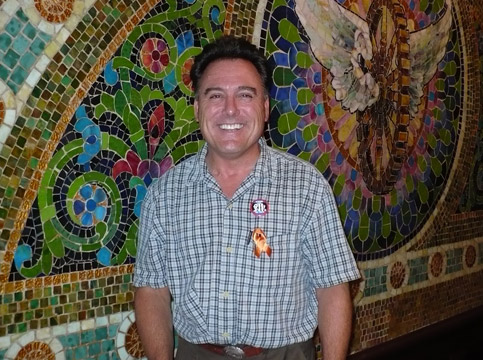 Gabriel Day of http://www.911sharethetruth.com and the Peace Resource Project http://www.peaceproject.com joined us bringing their 9/11 Truth movement resources and a report back from the weekend in NYC.
END_OF_DOCUMENT_TOKEN_TO_BE_REPLACED
§Dana and Carol Brouillet
by Camille S. 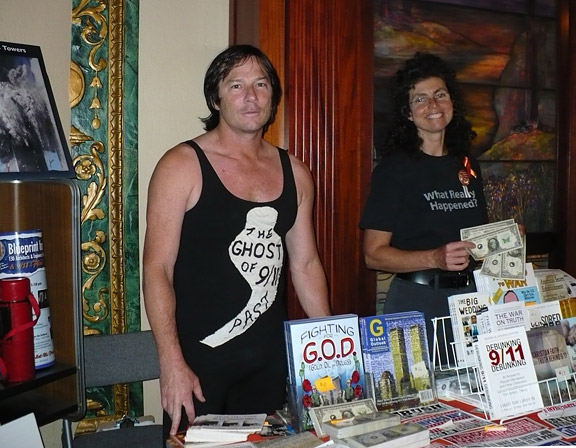 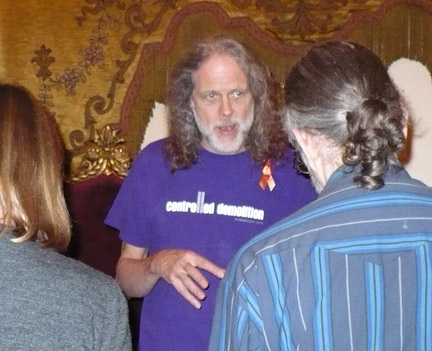 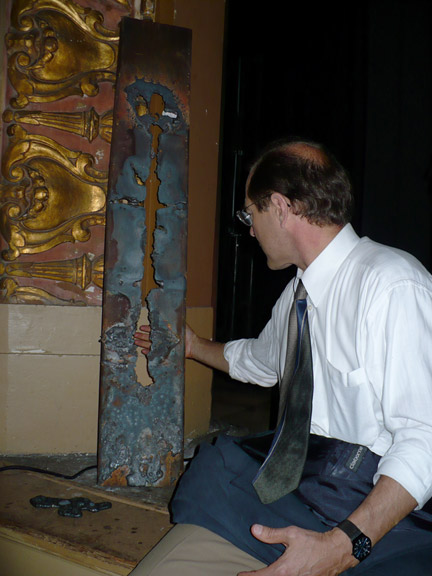 Richard Gage with piece of steel potmarked with Thermite holes
END_OF_DOCUMENT_TOKEN_TO_BE_REPLACED
Add Your Comments
Latest Comments
Listed below are the latest comments about this post.
These comments are submitted anonymously by website visitors.
TITLE
AUTHOR
DATE
9/11 question
Jimmy
Something else our FUCKED UP GOVERNMENT IS DOING TO US!
Douglas Bickford
Then read the Pop Mech debunking here
reader
Read the real truth
Check it out
THE BUSH RESPONSE TO THE 9-11 TRUTH MOVEMENT
THE BUSH 9-11 WAR LIES MOVEMENT
Why it hasn't been reposted to NYC IMC
mahtin
This should be on NYC IMC
Ben
It is not too late for the Truth
Maya
Great!
Yarrow
Support Independent Media
We are 100% volunteer and depend on your participation to sustain our efforts!