by Takver (Oceania Indymedia)
Twelve Greenpeace activists have been arrested at the world's biggest coal port at Newcastle, 160km north of Sydney, after painting the message "Australia Pushing Export Coal" on the side of a coal ship, The Endeavour, and unfurling a large banner in Chinese calling on China to be cautious of John Howard and George Bush’s attempts to sabotage Kyoto. The protest comes at the start of the 2007 APEC (Asia Pacific Economic Cooperation) forum meeting being hosted by Australian Prime Minister John Howard in Sydney 2-9 September 2007, and being attended by USA President George Bush, Russian President Vladimir Putin, Chinese President Hu Jintao and other Pacific rim leaders. 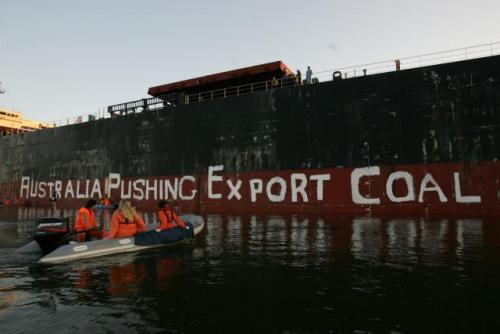 "Australia’s climate policy is to ‘Push Export Coal’ and to hell with the consequences for the planet," said Ben Pearson, Greenpeace energy campaigner.

"Real action on climate change means moving away from coal and shifting to clean, renewable energy – and we don’t have the luxury of time for expensive talkfests that have no concrete outcomes. Like any dealer protecting its patch, Australia’s government under John Howard is blatantly ignoring global efforts to extend and strengthen Kyoto, the only internationally binding agreement to deal with climate change – and pushing instead a hopelessly vague distraction through APEC.”

More than four million tonnes of coal will be exported from Newcastle during APEC, resulting in over 11 million tonnes of CO2 emissions – equivalent to the annual emissions from 800,000 average Australian households, according to Greenpeace. Factoring in the costs of climate change impacts, as detailed in the Stern Review, Australia’s coal exports will result in more than $1.2 billion of damage during the APEC week alone, and $64 billion annually, Greenpeace calculated.

Newcastle, already the world's largest coal port, is set for a major expansion to double its capacity for exporting coal.

"At a time when we need to see deep reductions in greenhouse gases, Australia is not only refusing to act, but is also increasing the greenhouse pollution it exports to the rest of the world. Australia’s climate policy is to protect coal exports at the expense of the climate rather than make the switch to renewable energy and improved energy efficiency measures we know we need to make." explained Ben Pearson, Greenpeace Australia energy campaigner.

Under a new police powers Act protesters arrested durng the summit week will have a presumption against bail. Police from Sydney travelled to Newcastle to discuss charges against the Greenpeace activists, but no action was taken under the APEC Meeting (Police Powers) Act 2007. Eleven activists were charged with malicious damage and a twelfth with dangerous navigation: all were released on bail later in the day.

The APEC Meeting (Police Powers) Act 2007 came into force on August 30 and remain valid to September 12, 2007. It includes a list of people the police can exclude from the city centre, plus expanded powers of stop, search and detention, and confiscation of items from people. APEC signals the rise of military urbanism in Australia.

NSW Police Minister David Campbell has said that antiwar demonstrators and anyone else considered "suspicious" will be arrested and detained without bail for the duration of the September 6-9 summit. People on the 'excluded list' will be denied access to restricted zones, without any recourse or avenue of appeal. The Daily Telegraph has already published a list of 29 people with their photos allegedly on this list. The measures in this Act amount to a new form of detention without trial, and constitute a direct attack on freedom of political expression and movement, aimed at outlawing dissent and stifling opposition to the APEC meeting.

Much of the northern CBD of Sydney will be contained by a nine foot high concrete and wire security fence, dubbed unofficially the Great Wall of APEC.

The coal ship, The Endeavour, sailed out of Newcastle at 11.30am Sunday local time, with the painted message already removed. 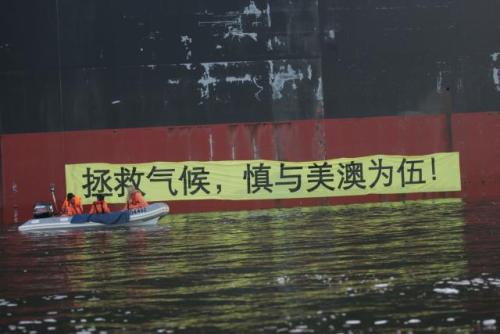 A banner reading "Save the climate, be cautious of US and Australia" in Chinese was attached to the side of a coal ship at the world's biggest coal port at Newcastle, Australia. China has ratified Kyoto and has better emissions savings programmes than Australia and the USA.(c)Greenpeace/Morris.
Add Your Comments
Support Independent Media
We are 100% volunteer and depend on your participation to sustain our efforts!