Newswire
Calendar
Features
Home
Donate
From the Open-Publishing Calendar
From the Open-Publishing Newswire
Indybay Feature
Publish to Newswire
Add an Event
Related Categories: U.S. | Anti-War
For a Just and Lasting Peace in the Philippines, Free Prof. Jose Maria Sison Now!
by AJLPP-USA
Wednesday Aug 29th, 2007 2:04 PM
The Alliance for Just and Lasting Peace in the Philippines (AJLPP or Alliance Philippines) vehemently condemns the arrest and detention today, August 28, 2007, by the Dutch authorities of the National Democratic Front of the Philippines (NDFP) chief political consultant, Prof. Jose Maria Sison. The arrest of Prof. Joma Sison impedes the course of a just and lasting peace in the Philippines. The incident derails the prospect of the resumption of peace talks between the Government of the Republic of the Philippines (GRP) and the NDFP. The Filipino people’s prosperity and future depends on the resolution of the protracted civil war raging in the Philippines and the determined principled pursuit and eventual conclusion of GRP-NDFP peace talks.
AJLPP-USA Update. 04
Wednesday, Aug. 29, 2007 at 1:48 PM
ajlpp_socal [at] yahoo.com
213-241-0906 337 Glendale Blvd. Los Angeles, CA 90026


For a Just and Lasting Peace in the Philippines, Free Prof. Jose Maria Sison Now!

The Alliance for Just and Lasting Peace in the Philippines (AJLPP or Alliance Philippines) vehemently condemns the arrest and detention today, August 28, 2007, by the Dutch authorities of the National Democratic Front of the Philippines (NDFP) chief political consultant, Prof. Jose Maria Sison.

The arrest of Prof. Joma Sison impedes the course of a just and lasting peace in the Philippines. The incident derails the prospect of the resumption of peace talks between the Government of the Republic of the Philippines (GRP) and the NDFP. The Filipino people’s prosperity and future depends on the resolution of the protracted civil war raging in the Philippines and the determined principled pursuit and eventual conclusion of GRP-NDFP peace talks.

For nearly fifteen years of GRP-NDFP peace negotiations, Prof. Jose Ma. Sison has played an integral role as the NDFP chief political consultant.
He was instrumental in developing and reaching agreements with the Manila government in over ten formal binding documents. The Hague Declaration, the Joint Agreement on Security and Immunity Guarantees (JASIG), the Comprehensive Agreement on Socio-Economic Reforms (CASER), and the Comprehensive Agreement on Respect for Human Rights and International Humanitarian Law (CARHRIHL) are milestones that Prof. Joma Sison has helped to facilitate. These agreements, which were approved under the previous administrations of former Philippine Presidents Ramos and Estrada, laid the foundation to set in motion the peace process and govern the conduct of the armed conflict between the GRP and NDFP.

Joma Sison’s arrest by Dutch police is a clear machination of the Philippine government’s desire to circumvent that process by violating the previously set-forth agreements. His arrest comes on the heels of the European Court of First Instance’s July 11, 2007 decision to order Sison’s name removed from the U.S. and European Union’s so-called “terrorist” listings and to defreeze his assets and funds. Sison’s arrest, like the arbitrary “terrorist” labeling he has had to endure for many years now, is an affront to due process and the rule of law as we know it. The GRP’s violations to these agreements are also evident with the increase of extrajudicial killings, abductions, torture, and fascist attacks against NDFP peace consultants and Filipino progressives.

The AJLPP demands that the Dutch authorities release Prof. Jose Ma. Sison immediately and stop all forms of harassment against him.

The AJLPP also demands that the Philippine government allow the peace process to proceed without the undue pressure of “terrorist” labeling, false accusations, and persecution of peace negotiators. Alliance Philippines also calls on all friends and allies to rally in defense of Joma Sison and other Filipino progressives. 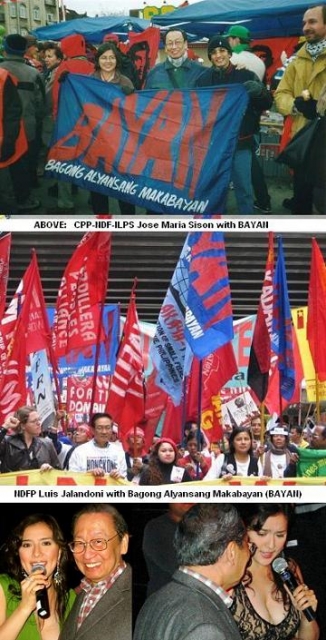 original image (360x705)
The CPP likewise condemns the Gestapo-style raid, the brusque ransacking of the Sison residence, the NDFP International Information Office in Utrecht, The Netherlands as well as the homes of other NDFP officials and staff in Utrecht and Abcoude, and the illegal seizure of computers, peace process documents and personal effects.

The raiding forces did not show any search warrant, broke down doors and forced their way into the homes of NDFP peace panel officers and workers. In some cases, they showed complete disregard of the welfare of children who were in the homes.

By trumping-up new charges against Comrade Sison, the US-Arroyo regime wishes to overturn his recent legal and political victories against the regime's acts of harassment. Recently, the Supreme Court has dismissed a series of false, malicious and politically-motivated cases filed against him and several others. Last month, the European Union's Court of the First Instance (ECFI) had criticized and annulled the European Commission's inclusion of Comrade Sison its "terrorist list," and ruled that his rights and safeguards as well as proper procedures were violated.

Arresting Comrade Sison signals the intensification of all sorts of legal manipulations, judicial proceedings and dirty tricks against the NDFP personnel to compel the NDFP to bow to the demands of the US-Arroyo regime. For a long time, Arroyo has long wanted to compel the NDFP to declare a premature and prolonged ceasefire, even without addressing the fundamental questions at the root of the armed conflict and in spite of numerous key prejudicial questions that have stalled the peace process.

The Arroyo regime wishes that the revolutionary forces to lay down their arms to allow the Armed Forces of the Philippines to carry out more attacks and various acts of violence and suppression against the revolutionary and progressive forces and the entire people.

The charges being levelled against Comrade Sison are preposterous and will not stand in any fair court of justice. Comrade Sison is falsely and maliciously being made to appear responsible for the acts carried out by the New People's Army (NPA) under the authority and expressed direction of the Philippine-based leadership of the CPP, people's army and people's revolutionary government.

Gloria Arroyo is utterly deceitful in claiming that Comrade Sison's arrest is "a boost to peace." In fact, it has been Comrade Sison who has been vigorously pushing for principled ways to revive the peace negotiations between the Philippine government and the NDFP. In having him arrested, the Dutch government and US-Arroyo regime have succeeded only in negating the efforts of one of the prime movers of the peace process. Comrade Sison's arrest and the political harassment against NDFP negotiators are only further leading to the termination of the GRP-NDFP peace process.

Arroyo shows that she is not at all interested in the peace process. Not only has her regime failed to comply with previous agreements and obligations, her security forces have been carrying out attacks against NDFP consultants and personnel involved in peace negotiations. In complete disregard of the standing agreements as well as international conventions and protocols on civil, political and social rights and civilized warfare, Arroyo's security and military forces in the Philippines have recently carried out the successive abductions of Philippine-based NDFP consultants Leo Velasco, Prudencio Calubid, Rogelio Calubad, Cesar Batralo and their staff members. Comrade Sison is only the latest of the victims of the Arroyo regime's fascsist attacks with the aim of completely scuttling the peace process.

The US government, Gloria Arroyo and her security, military and police officials are all gloating over the arrest and detention of Comrade Sison. They mistakenly believe that his arrest will weaken the resolve of the revolutionary forces. They are completely wrong in thinking that by incarcerating Comrade Sison they will put a stop to the rapid growth of the revolutionary forces in the Philippines.

In having Comrade Sison arrested, the US-Arroyo regime has succeeded only in further fueling the revolutionary movement and the Filipino people's anger against her brutal regime. Such brutal acts against the critics of the US-Arroyo regime only steel the people's determination to wage resistance in all fronts.

The Communist Party of the Philippines calls on all freedom-loving and patriotic Filipinos, the Filipino community and friends in The Netherlands and other countries, the international progressive, anti-imperialist and civil rights movement and other anti-imperialist and democratic forces and people around the world to act now and help safeguard the rights and life of Comrade Jose Maria Sison.

We express complete support and solidarity to the protest actions in the Philippines, The Netherlands, Hong Kong, the US, Australia, Belgium and other countries. We anticipate protest actions to intensify in the coming days in order to denounce the arrest, demand the Dutch government to immediately release Comrade Sison and stop the US, Philippine and Dutch governments from subjecting him to further fascist attacts and harassment.

At the same time, all units of the New People's Army (NPA) are tasked to continue carrying out tactical offensives nationwide in order to intensify the people's war to a new and higher level and contribute to the concerted effort of the Filipino people to put an end to the puppet, rotten and ruthless Arroyo regime.