We Say Good Bye to Pam

by Mike Rhodes (mikerhodes [at] comcast.net)
A memorial service for Pamela Kincaid, who was the lead named plaintiff in the homeless lawsuit against the City of Fresno, was held at Courthouse Park in downtown Fresno yesterday (Sunday, August 26). 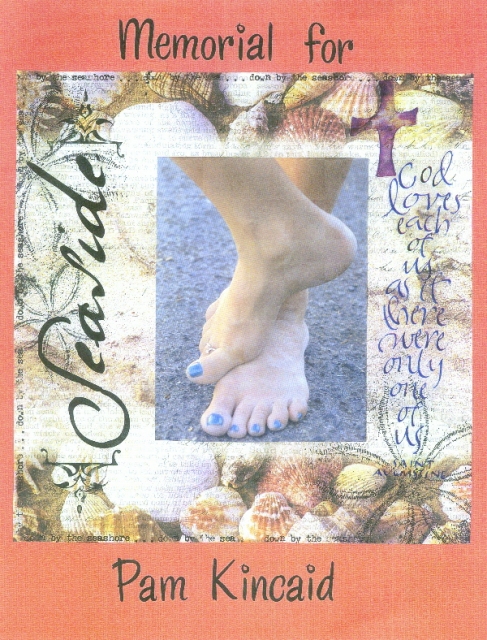 A memorial service was held for Pamela Kincaid on Sunday, August 26. Pam, who died earlier this month under suspicious circumstances, was the lead named plaintiff in the homeless lawsuit against the City of Fresno. For more information about her life and death see: http://www.indybay.org/newsitems/2007/08/18/18441458.php

The memorial service was organized by several of the women Pam knew. Brian and Liza Apper of the Saint Benedict Catholic Worker worked particularly hard to bring art, music, and stories about Pam’s life to the event. Everyone was given a box of Crayola Markers and asked to create an image that reminded them of Pam. Some people wrote words that symbolized some of Pam’s qualities - like “kindness, gentle, courageous, and brave.”

Her friend Steve, who she was living with shortly before her death, painted a rainbow and said “she is a rainbow”and that “she wanted dignity and respect for everyone.” Randy Johnson, who is one of the named plaintiffs in the lawsuit, said Pam told him that she was not in the lawsuit for the money - she was in it because she wanted to help all homeless people. He drew a picture of a tent - one for him and another for her.

The attorneys in the lawsuit are from the Bay Area and they all came to the memorial service. Attorney Paul Alexander chose the word “courageous” to describe Pam. He said “we will always keep Pam in our hearts.”

Pieter Moerdyk led participants in several songs with his acoustic guitar, getting good group participation when he sang Come Out Of The Shadows. The chorus went like this:

Annabella Uxmal, a formerly homeless Fresno woman, read several of her poems. There is a video of her excellent reading at the end of this story.

The memorial service honored Pam for standing up for justice, it gave her friends an opportunity to mourn her death, and gave dignity and respect to this homeless woman who made a difference in this community. 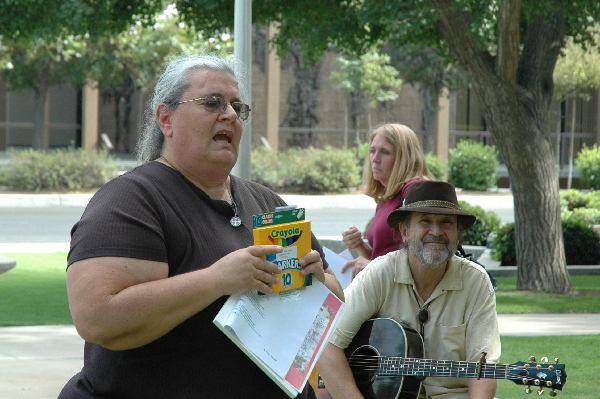 Liza Apper distributes the Crayola and paper at the memorial service. Each box of Crayola’s had a sticker on it that said “In Memory of Pam Kincaid, Celebrate the Artist Within You.”
END_OF_DOCUMENT_TOKEN_TO_BE_REPLACED
§Steve
by Mike Rhodes 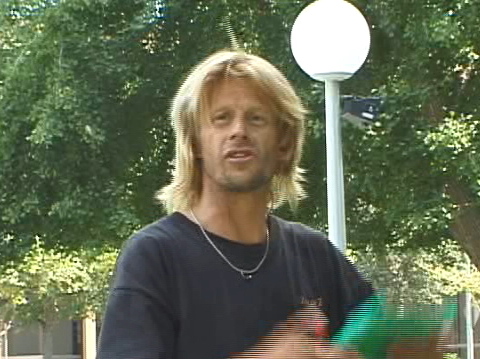 He drew a rainbow and said “she is a rainbow.”
END_OF_DOCUMENT_TOKEN_TO_BE_REPLACED
§Randy Johnson
by Mike Rhodes 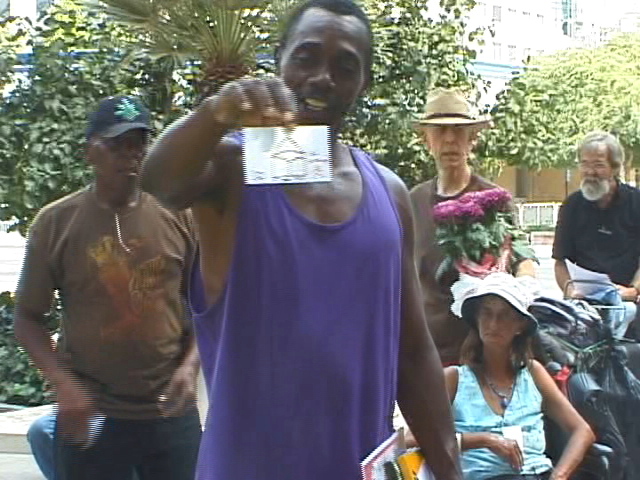 Randy is one of the named plaintiffs in the lawsuit against the City of Fresno. He shared his memories of Pam at the memorial service.
END_OF_DOCUMENT_TOKEN_TO_BE_REPLACED
§The Memorial Service was held at Courthouse Park
by Mike Rhodes 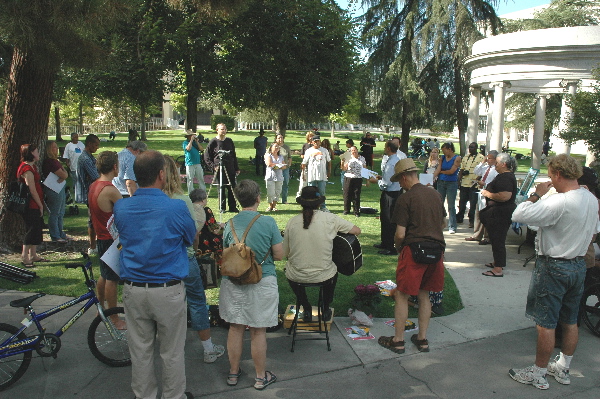 END_OF_DOCUMENT_TOKEN_TO_BE_REPLACED
§Pam was a Gentle Woman
by Mike Rhodes 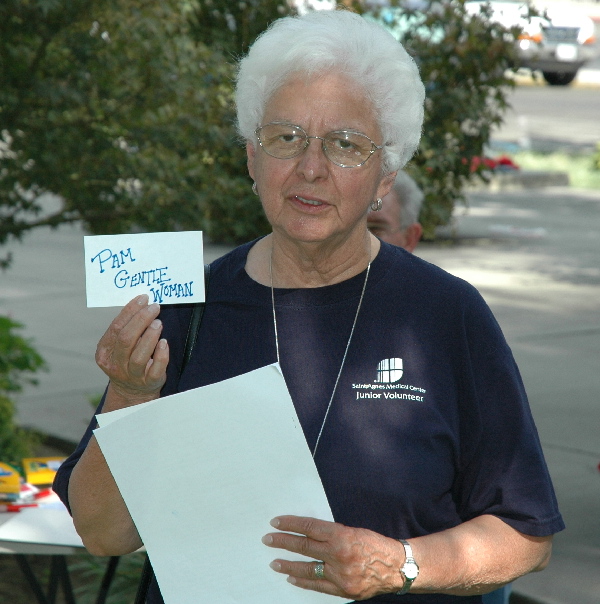 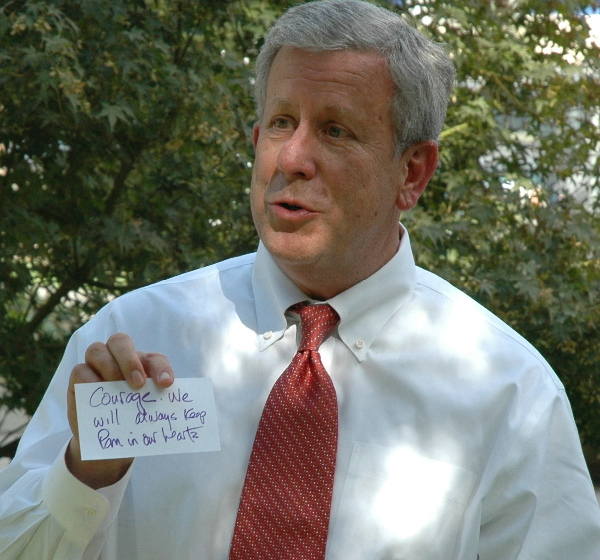 Paul is one of the attorneys representing homeless residents in Fresno in their struggle for justice. He was at the memorial service on Sunday and his word for Pam was courageous. 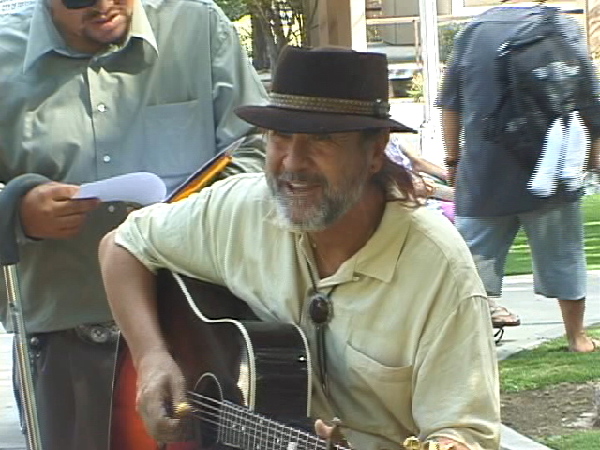 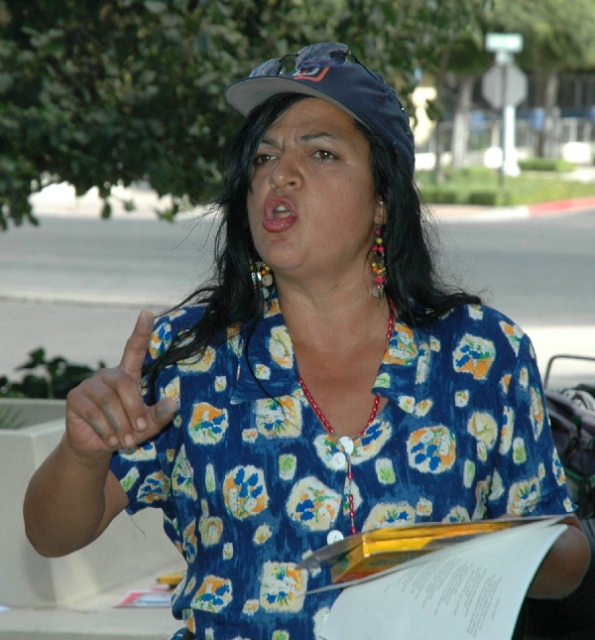 original image (600x645)
Annabella read two of her poems at the memorial service. See below for a video of her poem (it is very good).
END_OF_DOCUMENT_TOKEN_TO_BE_REPLACED
§Annabella Uxmal 2:47 minute video
by Mike Rhodes
Copy the code below to embed this movie into a web page:
Download Video (10.3MB) | Embed Video
END_OF_DOCUMENT_TOKEN_TO_BE_REPLACED
Add Your Comments
Comments (Hide Comments)
§Thank you Pamela, for helping my mother
by Mahishi Marroquín (nikkijoao [at] yahoo.com)
Thank you Pamela.

As young woman, at one time a homeless child living in the United States, I was luckier than many other women and children, I had a second choice. I came to my home land, Guatemala, leaving the most precious thing in my life....my mother, Annabella (UXMAL).

I had to be strong, I understood that I had to survive no mater what. I knew in my heart that in Guatemala I could have a better future and make a better life for my mother.

Now as a current activist, in Guatemala, against Gender Based Violence I dedicate my life to helping other women and children that cannot defend themselves....as did Pamela.

Although I did not meet Pamela, from the poem my mother dedicated to her.....I understand the importance that she had in so many lives and her desire to want Human Dignity for all, something we all fight for hoping that one day we live in a just world were there is food, shelter and clothing for everyone no matter race, gender or social status.

I give my deepest admiration and gratitude to Pamela for the love and guidance she gave to my mother and all the other human beings that were near her.

God bless you and enlighten the rest of us to follow your example. Thank you, Pamela, for having enough love within to share it with the most venerable people and to fight for their rights. You are more than worthy than all our admiration. May God give you peace and may your example live within each and everyone of us.

From my soul, thank you in the name of the children and family of all the people you have helped and given hope to.