I Guess Sherri Just Can’t Stay Out of Trouble

by Mike Rhodes
Police cite homeless woman for the crime of sitting in a wheelchair, on a public sidewalk, talking to friends. Jeeeeez! 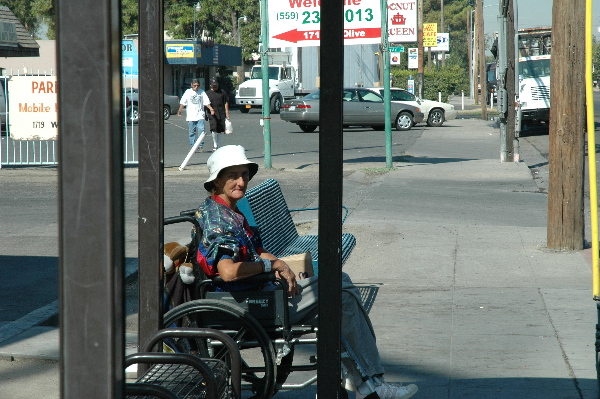 Sherri Williams, the homeless woman who was arrested for trying to use the restroom at McDonald’s (see http://www.indybay.org/newsitems/2007/07/08/18433984.php ), was given another citation yesterday. This one was for “loitering” on Olive Avenue, across the street from McDonald’s. Her alleged crime was sitting in a wheelchair, on a public sidewalk, at a bus stop.

According to Sherri, she was waiting for her husband Al so they could take a bus to north Fresno. Al arrived about 20 minutes after she was given the citation. “I was talking to a couple of friends when the police stopped me,” Sherri said. She noticed the officer had been sitting in his patrol car as he watched the small group of friends for about an hour. “As soon as we started to leave he drove over and said he wanted to talk.” Sherry told me the officer said “two buses went by and you didn’t get on them.”

Terry, one of the friends Sherri was talking to, told me “he went right after Sherri. We were all there but he just wanted to talk to her.” Sherri was the only person cited. Officer Unruh, the same policeman who arrested her at McDonald’s, issued this citation too. The citation notes that Sherri was in violation of “FMC 2-2808 (B) Loiter @ Bus Shelter” and orders her to appear on October 17, 2007 at the Fresno County Courthouse. If this citation is upheld in court, talking to your friends on a public sidewalk, could be a misdemeanor.

Unruh’s parting words, according to Sherri, were “this ought to make Al’s day.” I don’t know if it made Al’s day or not, but he did want me to tell this story as an illustration of how homeless people are constantly harassed in this community.

END_OF_DOCUMENT_TOKEN_TO_BE_REPLACED
§The citation
by Mike Rhodes 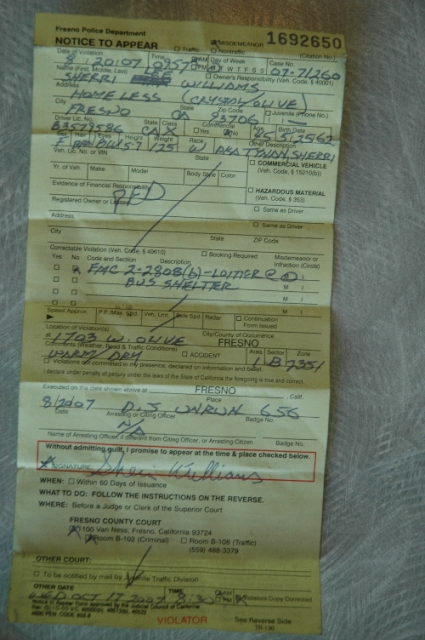 original image (500x752)
END_OF_DOCUMENT_TOKEN_TO_BE_REPLACED
Add Your Comments
Comments (Hide Comments)
§Losers
by coppiesdon'tcry
Ridiculous, obvious and pathetic. Cops always go for the person they feel they can overpower. How much more obvious can they get? Target a white-haired woman in a wheel chair.

I guess their days in Iraq were just too much for them and they have to take it out here at home on people they think they can get away with something with.

Pathetic.
Add a Comment
§she has brown hair, and that cop hasnt been to Iraq I imagine
by kelly
Despite the Brotherhood of the Police (or whatever they called themselves) liberating our supplies for Iraqi Police use, that particular officer Unruh has REPEATEDLY targeted and ticketed Sherrie, for trying to use a McDonald's restroom while her husband bought coffee!, I believe he was also the one who arrested Al, who was held for THREE DAYS without charges filed!!!
If you want to question police actions, Im sure you will be rewarded with many interesting facts.
We, the citizens of Fresno, deserve better police work. Its time we demanded drug testing for steroid use
in our law enforcement and public safety officers. Lets test our elected representatives for street drugs too.
I'd hate to think they act this foolish and hateful, clean and sober. Can you imagine licking Trump's boots without some sort of chemical lubricant easing the task? Meanwhile, they cant give the time of day to residents who dont have money to admire. RISE UP!
Add a Comment
Support Independent Media
We are 100% volunteer and depend on your participation to sustain our efforts!