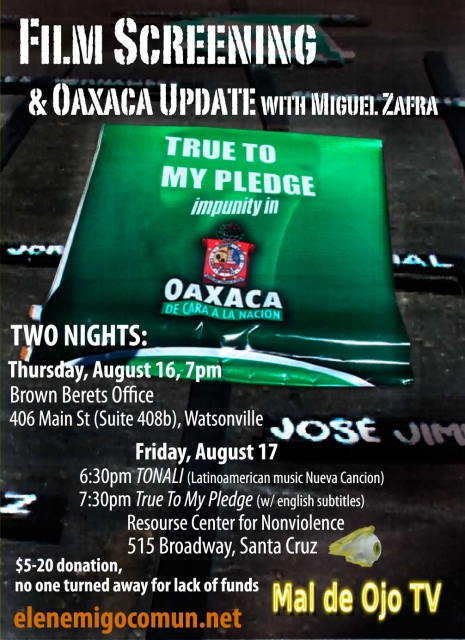 "Compromiso Cumplido" (True to My Pledge) is the first of a two-part documentary about the human rights violations during the current conflict in Oaxaca. The film documents some of the horrors committed against the civil society of Oaxaca, and shows the strategy of state terrorism employed by the local governor. Numerous deaths have been reported, and yet there have been no criminal accusations or investigations for these murders.

$5-20 donation,
no one turned away for lack of funds

Please join us to discuss the formation of a new group, Santa Cruz - Oaxaca Solidarity.

Mal de Ojo TV surfaced in Oaxaca City after June 14, 2006 as a coalition of independent, indigenous and community media workers, including Indymedia Oaxaca and Ojo de Agua Comunicación, dedicated to covering the rising social movement and its repression in Oaxaca. The organization has been targeted by the Oaxacan police. Mal de Ojo TV has been a vital source of coverage for most of the major events involving police repression in the city, but they have also been covering the building of a popular movement, documenting assemblies, peaceful marches, press conferences and proclamations.

http://www.maldeojotv.net
§Donate Books in Spanish to Oaxaca
by Santa Cruz - Oaxaca Solidarity Wednesday Aug 15th, 2007 2:42 AM
Donate books in Spanish for a small library in the community of Tequisistlan, Oaxaca. Knowledge is Power.

Books can open a path to knowledge and consciousness. However, many communities are denied access to this education for a lack of books and adequate libraries.

Support the community of Tequisistlan, Oaxaca start a small library with the donation of new and used books in spanish.

Suggested topics include, but are not limited to:

All donations will be taken directly to Tequisistlan.
Add Your Comments
LATEST COMMENTS ABOUT THIS ARTICLE
Listed below are the latest comments about this post.
These comments are submitted anonymously by website visitors.