Add an Event
Newswire
Calendar
Features
Home
Donate
From the Open-Publishing Calendar
From the Open-Publishing Newswire
Indybay Feature
Publish to Newswire
Add an Event
Related Categories: South Bay | Immigrant Rights
Anti-Immigrant Hysteria Opposed in Campbell
by ~Bradley (bradley [at] riseup.net)
Sunday Aug 12th, 2007 1:55 PM
On August 11th, Raging Grannies and friends rallied on the corner of Hamilton and Bascom to keep Campbell a hate-free zone, stop the militarization of the border and protest the Minutemen. The Golden Gate Minutemen / East Bay Coalition for Border Security are trying to expand their anti-immigrant interpretation of God's Law and the Bible to the South Bay. Campbell is a small city in Santa Clara County next to San Jose and just over the hill (Highway 17) from Santa Cruz. 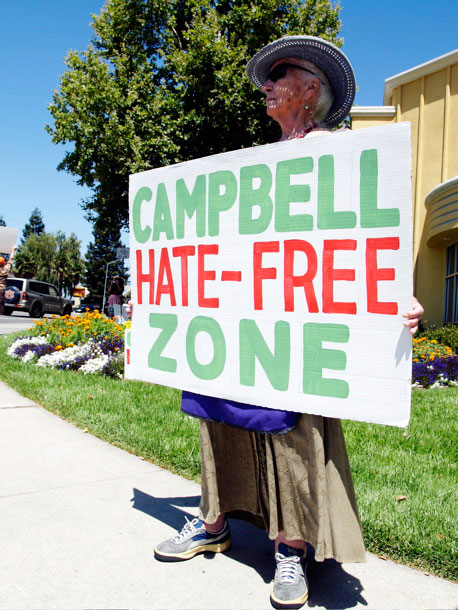 During the late 1800s, Campbell was the center for shipping fruit grown in the surrounding area, but now Campbell is home to eBay, the world's largest auction and shopping website with their headquarters only a block away from the protest on Hamilton. Many people will remember Campbell for the Pruneyard Shopping Center, a sprawling open-air retail complex which was involved in a famous U.S. Supreme Court case that established the extent of the right to free speech in California.

The Raging Grannies have put out a call for people to join them at the corner of Bascom and Hamilton on the second Saturday of each month from noon to 2pm for a rally to challenge the presence of Minutemen. The San Jose "gaggle" of Raging Grannies spearheaded the August protest and the September demonstration is being organized by the Action League Grannies of the Peninsula.

There were approximately 10 - 15 people on each side of Hamilton. The Raging Grannies and friends declare Campbell a hate-free zone and call for an end to the militarization of the border. Meanwhile, Santa Clara's "anti-illegal immigrant protest" organizer Roberta Allen and others held signs for "Full Pardons For Our Border Patrol Agents Ramos and Compean" and to "Free the Texas 3". One man repeated over a bullhorn, "Tell Bush, no political prisoners in the United States. Free Jose and Nacho."

More people are needed on September 8th, the second Saturday of September, to protest the Minutemen and demonstrate that their crusade of scapegoating immigrants will not be tolerated in Campbell or anywhere else. You can contact the Raging Grannies and learn more at their website, RagingGrannies.com
§Stop Racism Against Immigrants
by ~Bradley Sunday Aug 12th, 2007 1:55 PM 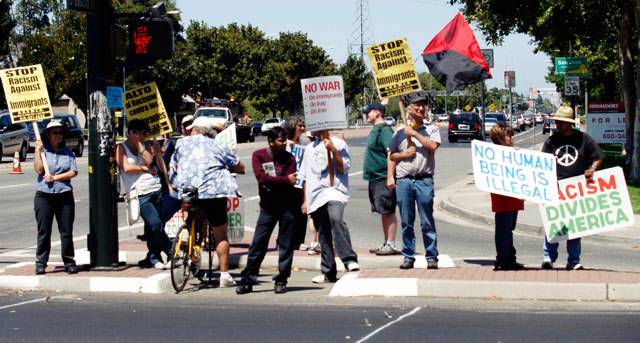 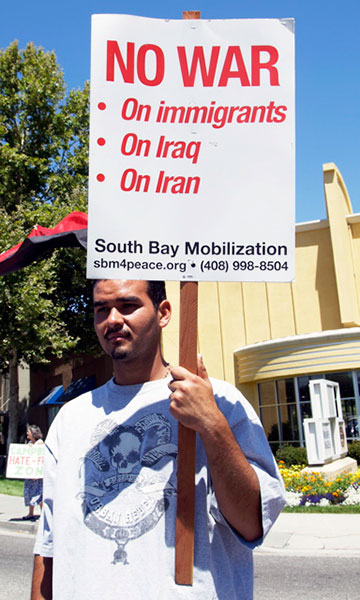 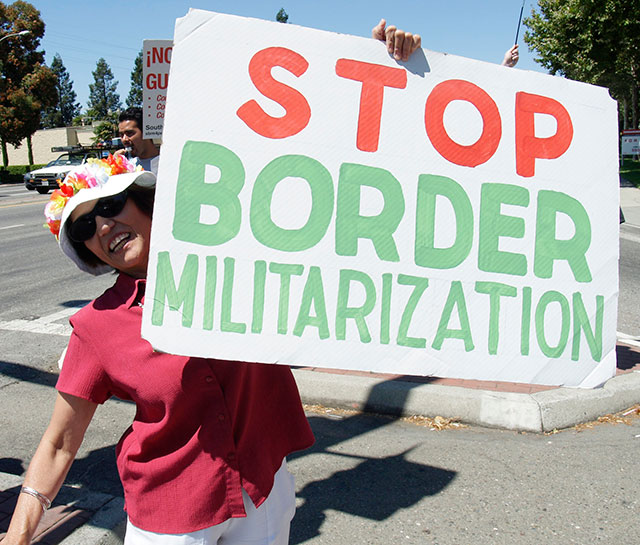 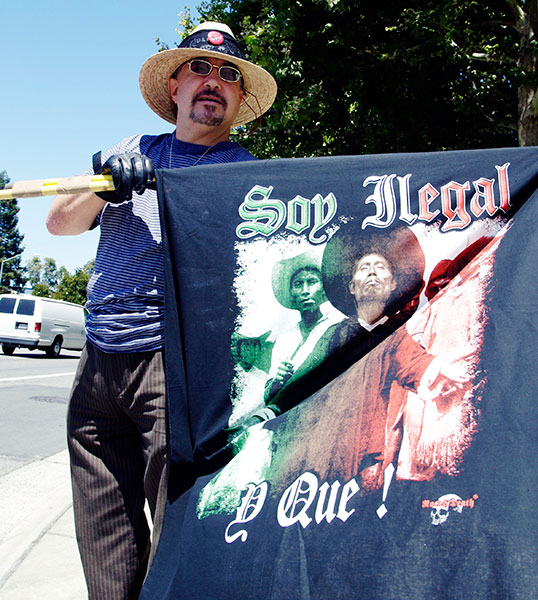 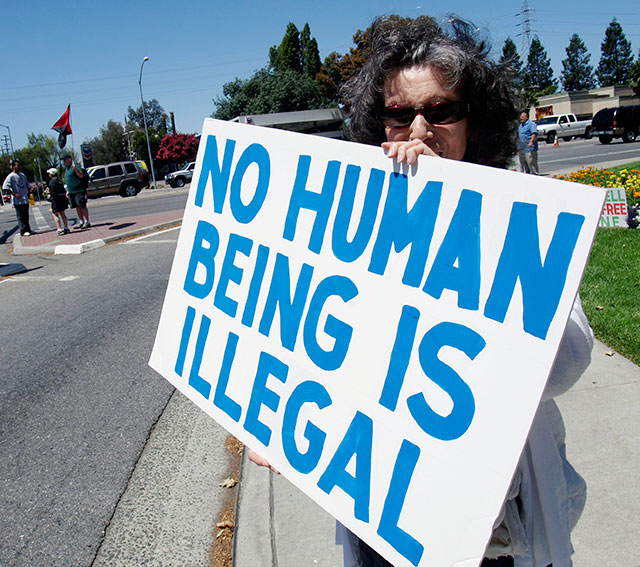 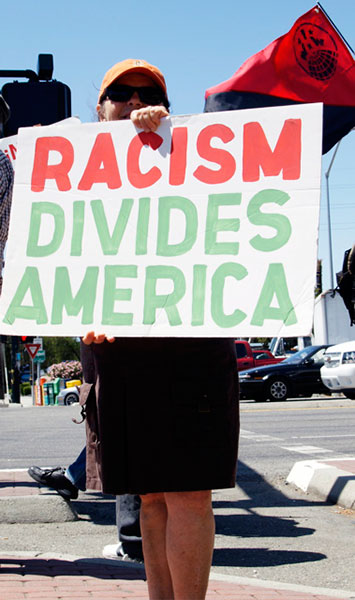 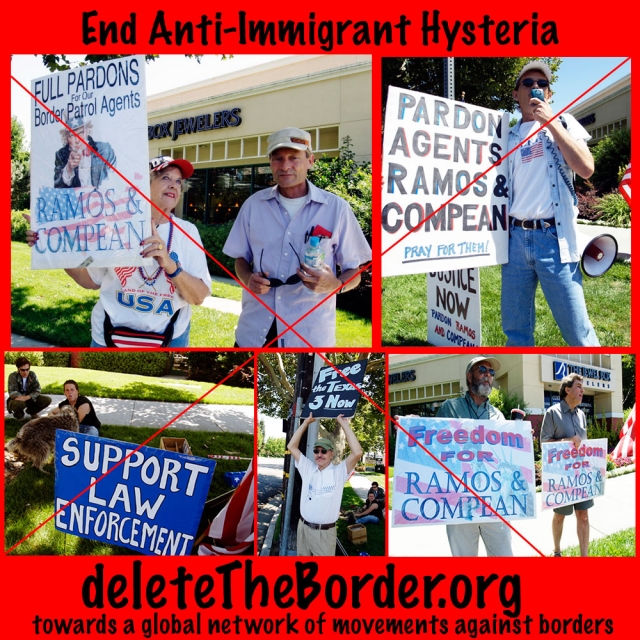 original image (1000x1000)
deleteTheBorder.org
towards a global network of movements against borders

http://deleteTheBorder.org
Add Your Comments
LATEST COMMENTS ABOUT THIS ARTICLE
Listed below are the latest comments about this post.
These comments are submitted anonymously by website visitors.