Add an Event
Newswire
Calendar
Features
Home
Donate
From the Open-Publishing Calendar
From the Open-Publishing Newswire
Indybay Feature
Publish to Newswire
Add an Event
Related Categories: International | Anti-War
Despite Continuing Threats, DU Expert Pushes on with Pursuit of Truth
by Brian Covert / Independent Journalist
Monday Aug 6th, 2007 12:51 AM
Dr. Asaf Durakovic, undeterred by death threats and harassment over the past year, continues his fight to break the "conspiracy of silence" surrounding depleted uranium. (originally published at sf.indymedia.org on 12 May 2005; updated 6 August 2007) 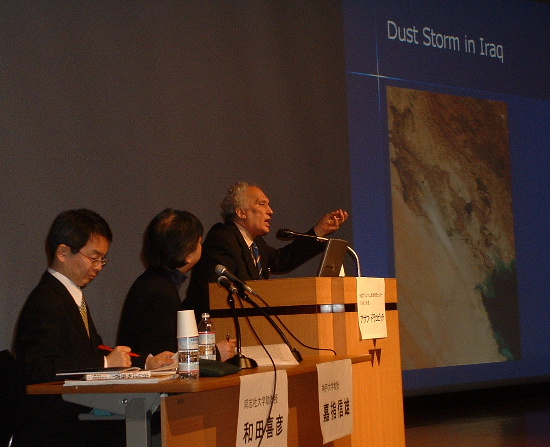 Despite Continuing Threats, DU Expert Pushes on with Pursuit of Truth

KYOTO, JAPAN — If it seems that Dr. Asaf Durakovic’s visits to Japan are always preceded by violent threats and harassment back home in North America, it is only because that is a constant reality for him.

Just before coming to Japan last year to appeal the deadly dangers of depleted uranium to the Japanese government and public, his family received a spate of threats by telephone back in the U.S. His latest Japan visit, his third to this country, was preceded earlier this year by the ransacking of his Washington D.C. home.

“Nothing was stolen from the house, but every single paper in my house was scrutinized,” Durakovic, 64, said in a recent interview here. “And I don’t know who did it. I have no idea. It was reported to the police [but] the police were helpless” in finding the culprits. The windows of his car, he adds, were smashed out earlier this year at his home in Canada.

And that’s not counting what Durakovic calls the “betrayal” of the organization he heads, the Toronto-based Uranium Medical Research Centre, by outside infiltrators over the past year or the mysterious hit-and-run incident in Toronto that targeted some of his colleagues in front of a church on a quiet Sunday morning.

These anonymous acts of violence over the past year, he says, are the kind of unfortunate price that all conscientious scientists throughout history have had to pay in trying to get the truth out — in his case, the truth about depleted uranium (DU), a lethal waste product of the uranium enrichment process that has become a critical part of modern-day warfare. Many doctors and scientists have joined the soup kitchen because of speaking up against the obvious injustices that are going on in the world,” Durakovic said. He says he intends to keep on talking publicly about DU despite the ongoing pressures to quit.

He was recently in Kyoto, the ancient Japanese capital, to do just that before an audience of a couple hundred students and scholars at the prestigious Doshisha University. His speaking appearances are generally warmly received by the public in Japan, if not ignored by the Japanese government and mainstream media.

Durakovic’s troubles, of course, date back far beyond this year or last: As a military insider, he had served at the rank of colonel in the U.S. Army Medical Corps during the 1990-91 “Operation Desert Shield” phase of the Persian Gulf War attack on Iraqi military forces. Upon returning to the States, he was appointed chief of nuclear medicine at the Department of Veterans Affairs Medical Center in Wilmington, Delaware. He recalls that a group of American veterans who had served in Iraq were referred to him with apparent traces of uranium in their bodies. Durakovic ordered diagnoses on the soldiers and the tests, he says, came back positive.

The test records later were supposedly lost somewhere along the line by U.S. military officials; Durakovic then did more tests and came up with the same positive results. “So it was obvious the [U.S.] government lied,” Durakovic told this writer in an interview in Osaka, Japan last year.

The pressure on Durakovic to immediately cease his testing of American veterans for depleted uranium poisoning in their bodies was steadily raised, including from the chief of the military hospital where he worked. Durakovic was fired from the hospital in February 1997. He never got his job back. He went on that year to found the nonprofit Uranium Medical Research Centre in Toronto to continue testing for depleted uranium and to challenge official claims of DU’s minimal risks to humans and the environment. His team has since gone to Afghanistan and Iraq to collect and test DU samples directly from civilians, as well as from U.S. military veterans who are now Stateside.

Over the past year, Durakovic and his colleagues have continued presenting their findings at scientific gatherings and public forums around the world. Durakovic himself last year won the “2004 Nuclear-Free Future Education Award” in India in recognition of his work.

His team’s tests for DU contamination continue to come up positive, he says. The evidence has hit especially close to home for Durakovic: Two of his UMRC field staff members fell ill after spending a few days in Samawah, Iraq, collecting DU samples in 2003. One of them, Tedd Weyman, remains nearly incapacitated to this day with severe respiratory problems. “It is alarming because he [Weyman] only stayed in the area for eight days,” Durakovic said. “Now, I’m asking everybody to use their common sense and think of what might have happened to people who were stationed there for three, four, six months.”

That includes the hundreds of Japanese Self-Defense Force soldiers still stationed in Samawah, the same area in Iraq where Durakovic’s team had confirmed DU contamination. An estimated 500 Japanese soldiers recently departed for Samawah with great fanfare from an SDF base in Itami, Hyogo Prefecture in western Japan. How DU will affect those and other Japanese soldiers now based in Iraq — ostensibly to help shore up the U.S. occupation — remains to be seen, as the Japanese press and even opposition political parties are mostly mute on the subject of depleted uranium. But Durakovic says he would “very much appreciate an opportunity to be introduced to some of those [Japanese] veterans” and hopefully test them for DU someday.

His fight to reveal the truth about DU, he maintains, is not about merely confronting the Pentagon or the U.S. Department of Defense, but also standing up to what he calls the “political-industrial complex” of other countries — such as Britain and Canada — that he sees as stonewalling or trying to whitewash the facts and data surrounding depleted uranium.

“The Department of National Defence of Canada conducted a worthless study [of DU] in which millions of dollars were spent, using the wrong population, the wrong methodology and wrong specimens to come to the wrong conclusions,” Durakovic said. “And their wrong conclusions were that there is no risk of DU because they found nothing. But our team found DU, our team found sick people, our team found catastrophic dimensions of radioactive warfare. …And I asked the people from Canada: ‘Why didn’t you use a washing machine to measure uranium isotopes? Because your methodology is as equally insensitive as a washing machine’.”

If Durakovic has faith in anything, it is in the power of science to rise above all forms of politics. “Eventually, the truth of scientific information will prevail. Political parties rise and fall. Governments and kingdoms rise and fall. Swords and crowns can be dug [from] the mud of dirty rivers. But scientific facts will always remain unchallenged.”

“That is what we have to encounter today,” he adds. “In the unpleasant reality of radioactive warfare, somebody has to be taking the consequences for the work that is not according to the tastes of the current political opinions.” His plans for the coming year include continued testing of the remaining 120-plus DU samples his team has taken from people in Iraq, as well as DU testing of civilians in Port Hope, Canada and Padukah, Kentucky in the U.S. — places in North America with their own histories of nuclear contamination and cover-up.

So for now, despite all the threats and harassment, Dr. Asaf Durakovic pushes on with his DU research, undeterred by the ideological winds of time: “We were not afraid of the communist secret police. I lived in communist Yugoslavia and I was not afraid of that. So I’m not going to be afraid of free countries either.”


Brian Ohkubo Covert is an independent journalist based in Hyogo, Japan. 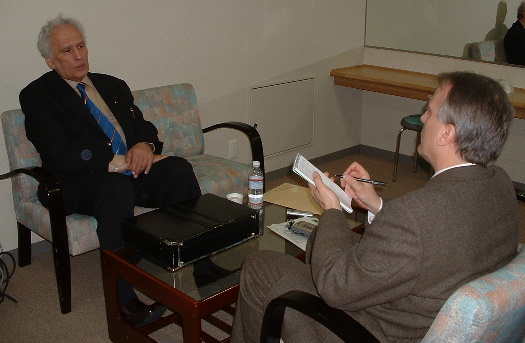 Dr. Asaf Durakovic (left), being interviewed by the author at Doshisha University in Kyoto, Japan