On July 16, state and federal forces in Oaxaca City attacked members of APPO (Popular Assembly of the Peoples of Oaxaca), people participating in the popular celebration and journalists, leaving at least one dead, numerous injuries and over 60 detained or disappeared (en1, en2; es1, es2). The popular Guelaguetza was an alternative to the government-supported celebration, co-opted from the traditional holiday by commercial tourist interests.

Copy the code below to embed this movie into a web page:
Download Video (7.7MB) | Embed Video

Activists from vAPPOroaxaca and The Indigenous Binational Front (FIOB) began early in the morning by informing the folks standing in line to get into the consulate about the situation in Oaxaca and by playing videos (vid1, vid2) from the July 16 attack on a laptop. After the Consul arrived mid-morning in his fancy car and expressed his displeasure by staring and making faces at the protesters, they began chanting and loudly demanding freedom for political prisoners and the removal of the corrupt governor of Oaxaca, Ulises Ruiz.

APPO formed last summer shortly after school teachers repelled an attack by state forces on their occupation of the zócalo (central plaza) of Oaxaca City and effectively governed the city for several months until an invasion by Federal Preventative Police, prompted by the murders of Oaxaqueños Esteban Zurrita and Emilio Alonso Fabian and Indymedia journalist Brad Will by government-sponsored paramilitaries, on October 27. San Diego activists set up a camp and continuously occupied the sidewalk outside of the Mexican Consulate from October 29 to November 21, using it as a base for protests, marches and rallies in solidarity with the People of Oaxaca. 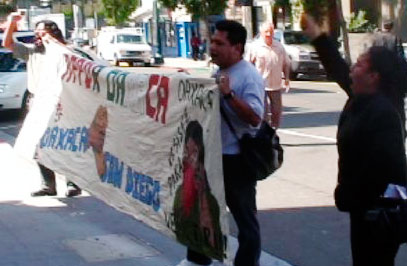 http://sandiego.indymedia.org/en/2007/07/1...
Add Your Comments
Support Independent Media
We are 100% volunteer and depend on your participation to sustain our efforts!