by Cindy Sheehan
"It is... with a heavy heart that I announce my candidacy against Nancy Pelosi in California's 8th." 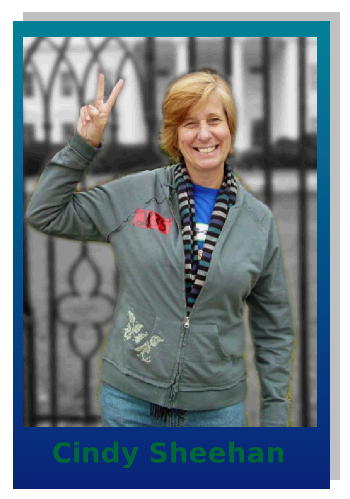 Journey for Humanity and Accountability, Day 14

I am lying in my hotel bed at the end of a very busy, productive, yet sad day.

About 300 people gathered today and marched the 3½ miles from the entrance of Arlington Cemetery to Congressman John Conyers' office to demand impeachment and accountability from one of the leading figures in American politics for the last four decades.

We were so thrilled with the turnout and the energy of the group. There was great media coverage and about one dozen freepers on the opposite corner with signs such as: "Traitors go to Hell" and "Cindy Sheehan go to Hell." Nice. I have learned that hell can be on earth and if there is anything worse than burying a child, I don't want to know about it.

At the end of the march, Reverend Lennox Yearwood, President of the Hip Hop Caucus, Ray McGovern (retired CIA analyst), and I met with Congressman John Conyers to implore him to institute impeachment proceedings against the pretenders to the White House who are destroying our democracy, making a mockery out of our rule of law and who are responsible for the deaths of hundreds of thousands of innocent people.

This was my third meeting with Congressman Conyers about impeachment. I hold a special place in my heart for him and I revere him for his decades-long service to this nation. But for the life of me, I cannot understand why he will not go forward with impeachment now.

A year ago, he introduced HR635 to impeach George Bush while he was Ranking Member of the House Judiciary Committee and not even chairman. He wrote the book on impeachment called: The Constitution in Crisis and he readily admits that BushCo have committed impeachable offenses.

It's about partisan politics, pure and simple. The Congressman claims there is absolutely no way that impeachment can go forward and, when I was nearing the end of my hope, I cried out: "So, if the people's house won't help us then we the people have no recourse against the executive branch." To which he replied: "Yes you do, vote the enablers out in '08." Firstly, Congressman Conyers told us to put Democrats back in Congress to end the war and impeach BushCo. We did that and instead of ending the war, they gave George Bush more money to wage it and to conduct his deadly and tragic surge. Secondly, '08 will be too late to hold George and Dick accountable. Thirdly, thousands of more people will die in these last months of the worst Presidency in American history. Lastly, after Dick proclaimed that he was not part of the executive branch and that his office does not have to comply with requests to turn over documents to the National Archives: 435 Congress Reps should have signed onto H Res 333 to impeach Cheney. Only 14 have co-signed Congressman Kucinich's bill, so that makes 421 elected Congressional officials enablers of the crimes of the Bush Regime.

At the end of this day, Speaker Pelosi has not supported impeachment and has not upheld her oath of office to "protect and defend" the Constitution. Like Congressman Conyers said almost a year ago, our Constitution is in crisis and we can't wait for more meetings and more stalling from Reps who think the problem will go away in '08. The Middle East is rapidly falling apart under this regime and our country is sliding rapidly into a state of one-branch tyranny while our "heroes," the Democrats, fiddle.

It was with very heavy hearts that Rev. Yearwood, Ray, and I reported back to the media that the Congressman had said that with over 1 million signatures on petitions, one phone call coming into his office every 30 seconds supporting impeachment, and with 300 activists in the hall to support him, he was still not going to move forward with the most urgent duty of his career. The Rev and I were particularly disheartened and broken because we do love the Congressman so much, but we love our country and the people of Iraq and the Middle East more. The Rev and Ray spent many years serving their country in the military and the CIA and I had a son who gave his life to do what the Congress is supposed to do: protect our freedoms, not hand them over to the mob that runs our country.

It is also with a heavy heart that I announce my candidacy against Nancy Pelosi in California's 8th. If anybody would dare think I am not serious, I would hope they would look back at the last 3 years of my life and everything I have sacrificed to restore our nation to one that obeys the rule of law and can be looked up to with respect once again in the international community and not as the hated laughingstock on the block.

I am committed to challenging a two-party system that has kept us in a state of constant warfare for the last 60 years and has become more and more beholden to special interests and has forgotten the faces of the people whom it represents.

I am committed to using our strength as a country to wage peace and to elevate the status of every citizen in our country by converting the enduring war economy to a prosperous one with lasting peace.

Someone needs to step up to the plate to do this and I challenge other Americans to do the same. Challenge the status quo, because the status quo is no good. We need to become plugged into our government once again as active participants not just passive voters.

Cindy Sheehan is the mother of Spc. Casey Sheehan who was killed in Bush's war of terror on 04/04/04. She is the co-founder and president of Gold Star Families for Peace and The Camp Casey Peace Institute.

END_OF_DOCUMENT_TOKEN_TO_BE_REPLACED
Add Your Comments
Comments (Hide Comments)
§THE TIME IS NOW
by jo citizen
i'm behind cindy sheehan all the way. it is a stain of shame on the american people who sit and lack the courage to save their nation. who allow the msm to serve them up garbage at the bidding of the immoral "leaders" that we have turned over our present and future to. we live by a lie that is killing us. at this point in history, americans are some of the most shameful cowards in the history of mankind. we don't have the guts to stand up to those that destroy us by sticking our heads in the sand, while ignoring the fact that our asses are exposed. there is NO excuse. get off your asses and be the men and women you pretend to be. give the american children a chance to live in a free nation and the opportunity of a good life or carry your shame to the grave that will be yours, probably prematurely. these immoral "leaders" are a reflection on our society and rest firmly upon our shoulders.
we must take back our country and declare the sale of our nation is null and void. YOU GO CINDY! I AM WITH YOU!
Add a Comment
§Run Like The Wind, Cindy!
by onlinedesign (editor [at] theonlinedesign.net)
Hey "jo citizen", I agree with you. However, I have decided to stop taking all of this "we" are an apathetic Nation, blame the people crap (no afront to you, just analogy) . I sincerely believe that a lot of concerned Americans simply do NOT KNOW what it is they can do to help. Think about it. What can I do to help? You can't fire the President! Cindy Sheehan has been face to face with these guys...marched...begged ...protested...nothing! She is in a position to do something now....I say you go Girl! Get Pelosi out! However, for the rest of us? I recently found Impeach For Peace.org! They have a free, online do-it-yourself form to impeach...it's easy, it's legal! That's one concrete thing "we" can do to stop the abomination...if enough people know about it. Impeach For Peace, now!
END_OF_DOCUMENT_TOKEN_TO_BE_REPLACED
Add a Comment
Support Independent Media
We are 100% volunteer and depend on your participation to sustain our efforts!