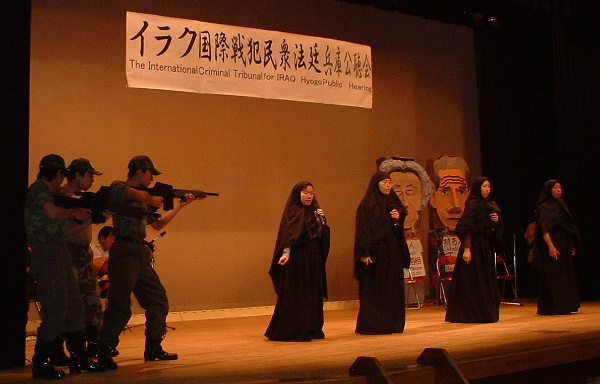 An estimated 350 people throughout the day attended the 3rd International Criminal Tribunal for Iraq (ICTI) Hyogo Public Hearing, which featured direct testimony from a visiting Iraqi labor union leader, firsthand news footage of unfolding events in Iraq by an independent Japanese journalist, and a host of performances by university students and other activists in Japan.

“The Japanese government has offered up Okinawa [site of U.S. bases] as a training ground for the U.S. military forces to go and commit massacres in Fallujah [Iraq],” one Japanese activist, a Mr. Nakakuwa, told the audience. “Therefore, the Japanese government, along with the U.S. and Britain, is a war criminal.”

That sentiment was echoed throughout the day by the tribunal’s organizers, guest speakers and performers. Ever present on the stage here Sunday were also replicas of the two “defendants” in absentia: Bush and Japanese Prime Minister Junichiro Koizumi.

The series of tribunals is being organized and supported by a variety of academics, grassroots activists, journalists and citizens groups throughout Japan. “We need to create a war crimes tribunal of our own making,” organizers of the ICTI said in a preliminary appeal in August 2003. “[W]e need to collect pieces of evidence of war crimes committed by Bush, pile them up, and analyze them. We need to elucidate in light of international law that the war by Bush was nothing but an invasion. This tribunal is a stage for [that] sake.”

One of those here on that stage to testify was Aso Jabbar, representative of a labor union called the Union of Unemployed in Iraq (UUI), who is currently visiting Japan and raising funds for his organization’s activities in Iraq.

Jabbar stressed that the majority of ordinary Iraqi people are now facing two main enemies: the U.S.-led occupation forces and violent Muslim fundamentalists. “It’s true they [Muslim fundamentalists] are fighting the U.S. occupying forces,” Jabbar said. “But they are attacking at the same time the civilian people. They are attacking the progressive organizations. And they have the strategy to establish an Islamic government in Iraq.”

Jabbar said the UUI calls for “the end of the occupation and withdrawal of the U.S. and coalition occupying forces because we regard them as the major source of the insecure situation in Iraq.”

Contrary to American military and media propaganda, most Iraqi people do not want the U.S.-led military forces in their country, he said. The majority of the Iraqi people do not agree with the occupation and they are against it,” said Jabbar, who also represents the Federation of Workers Councils and Unions in Iraq (FWCUI). “They are against the American policies and they have the experience. And they have not the feeling that their lives have been changed,” he continued. “Saddam [Hussein] has been removed and the situation is deteriorating: the security situation, the living conditions, the situation of women, situation of the unemployed and the labor movement — everything is deteriorating. So the people have protests and demands, and they want to change their lives.”

Also standing in the way of that change, he says, are the dangerous forces of what he called extreme right-wing “political Islam.”

“These militant groups, they are so aggressive that the ordinary people, they fear them,” Jabbar told the audience. “You see in the interviews that the [Iraqi] people are protesting against the occupation, but they are saying nothing about the military resistance or the Islamic resistance or the rest of the Ba’ath Party” of former Iraqi leader Saddam Hussein. “The majority of them, they are secret organizations,” he said of the fundamentalist groups. “They are working underground and they practice only armed violence. So the normal people, they have angst and fear to speak or to criticize in public their actions.”

The ICTI was created last year to give ordinary citizens in Japan a voice in the events then unfolding in Iraq, amid the Japanese government’s plans to send its Self-Defense Forces to Iraq in violation of Japan’s Constitution. About 550 Japanese SDF troops are now based in Iraq, including in Samawah, an area reported to be highly contaminated with depleted uranium from U.S. military weapons.

One of those who has recently returned from Iraq was independent journalist Akihiro Nonaka, founder and head of a Tokyo-based company, Asia Press International. “We independently report what the mass media don’t report,” said Nonaka. “And the mass media are not reporting the suffering of civilian victims in Iraq.”

Nonaka said he recently returned from a trip to Palestine and Iraq, where he and his crew managed to film the ongoing wars there. He aired some of his Iraq video footage at the tribunal, including dramatic scenes of enraged crowds of Iraqi people shouting “Down, down Bush!” and “America, no!” as they surrounded U.S. military vehicles with seemingly bewildered U.S. soldiers inside.

“America’s history as a nation was created through the killing of its own indigenous peoples,” Nonaka said. “The U.S. thinks that ‘We are good, and those who are against us are evil’. Bush himself uses the word ‘evil’. …What America is doing in Afghanistan and Iraq is like the old western movies, based on the overly simple idea of good versus evil. But the U.S. is ignorant when it comes to Islam. So the anti-U.S. reactions in Iraq are related to this.”

He cited the United States’ defeat in Vietnam decades ago to a lack of true understanding of the Vietnamese people, a pattern the U.S. is repeating now in the Middle East. “America doesn’t try to understand Iraqi society, Iraqi history, the history of Islam as a religion,” Nonaka said. “Because the U.S. thinks its own democracy is so great, it doesn’t hear the voices of the Iraqi people. And the U.S. thinks of Islam as something underdeveloped.”

Nonaka also had harsh words for Prime Minister Koizumi of Japan, who has taken up the cause of holding the Japanese citizenry accountable to jiko-sekinin (individual responsibility), following the return of five Japanese citizens recently held hostage in Iraq. “The Japanese government keeps saying how it undertook so many actions for the release of the hostages,” Nonaka said. “But that is the job of the government; that’s what we pay taxes for. [I want to say to the Koizumi government] Don’t keep talking about it — just do it!”

Nonaka said the recent U.S. blockade and killing of civilians in Fallujah are a kind of measuring stick for those who call themselves journalists and those who really are journalists. “One of the [five Japanese] hostages, Junpei Yasuda, like some real journalists, tried to go to Fallujah to document what is happening there,” Nonaka said. “I think you can’t call yourself a journalist if you don’t want to go cover Fallujah.”

The current series of Iraqi tribunals follows in the footsteps of a similar tribunal in Japan last year — the International Criminal Tribunal for Afghanistan (ICTA)— which, after a series of public hearings, found Bush guilty of war crimes in Afghanistan.

Noting that Bush and other world leaders are unlikely to be tried in any national or international court, ICTI organizers last December adopted a statute that outlines the tribunal’s jurisdiction concerning Iraq. It includes trying persons for crimes of aggression and genocide, as well as crimes against humanity and crimes of war. 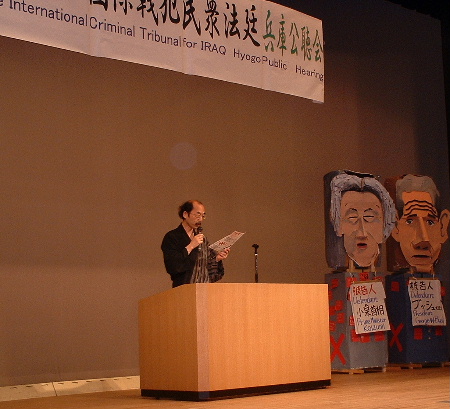 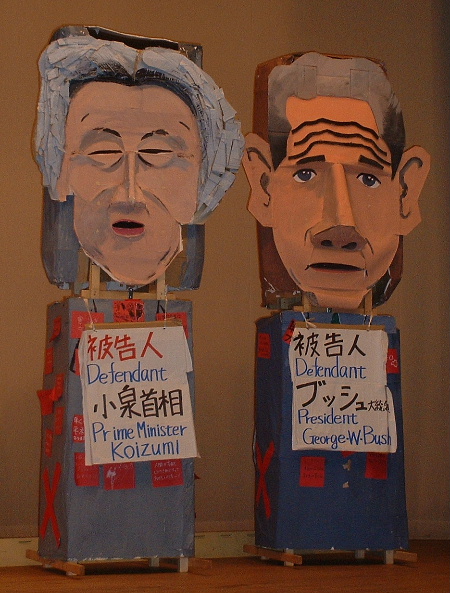 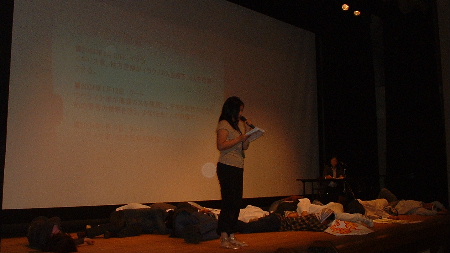 Japanese youth activists stage a performance of a "news report" from Iraq that the mainstream media are said to be missing: the massacre of innocent civilians by U.S.-led forces.
§The Performers
by Brian Covert / Independent Journalist Friday Jul 20th, 2007 5:40 AM 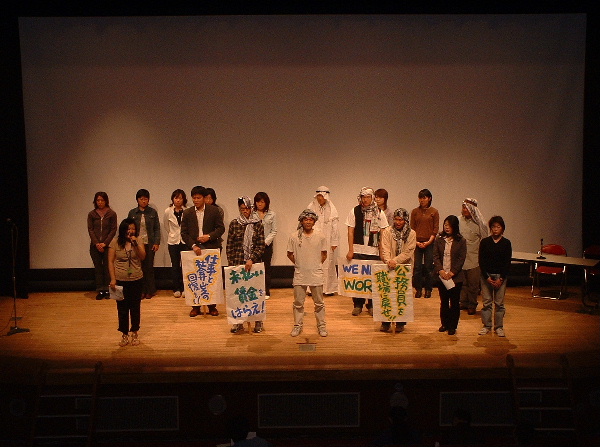 Japanese youth activists stage a performance of a "news report" from Iraq that the mainstream media are said to be missing: the massacre of innocent civilians by U.S.-led forces.
The group readies to take a bow after its performance.

Some of the estimated 350 visitors who attended the Kobe tribunal throughout the day.
§The Experienced
by Brian Covert / Independent Journalist Friday Jul 20th, 2007 5:40 AM 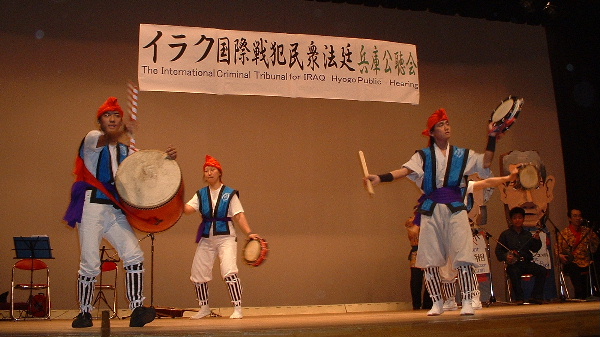 A performance of the music and dance of Okinawa, another nation that remains occupied by the U.S. and Japan.
§The Troupes
by Brian Covert / Independent Journalist Friday Jul 20th, 2007 5:40 AM 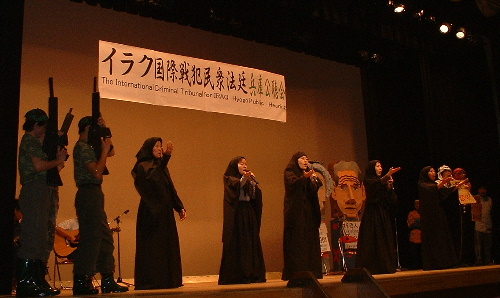 One of the several music and dance performances at the tribunal, this one with Japanese performers in the roles of Muslim women and foreign soldiers bearing machine guns.
§The Testimony
by Brian Covert / Independent Journalist Friday Jul 20th, 2007 5:40 AM 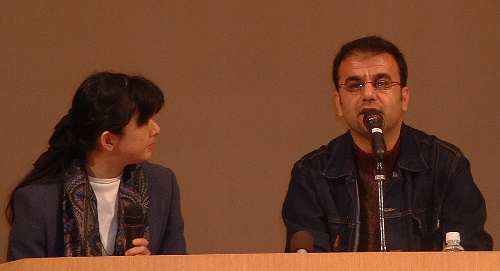 Aso Jabbar (right), Iraqi representative from the Union of Unemployed in Iraq, and interpreter Reiko Watanabe, speaking at the tribunal. "It's very, very unimaginable how so many people in Iraq are in this difficult situation without clean drinking water, electricity, wages and basic living conditions...." Jabbar testified.
§The Sharing
by Brian Covert / Independent Journalist Friday Jul 20th, 2007 5:40 AM 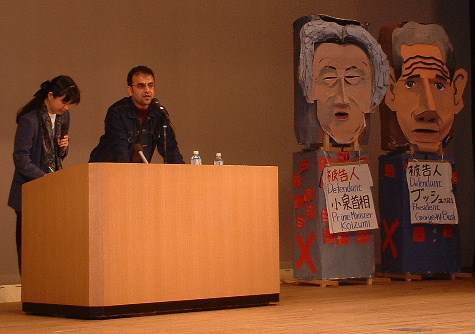 The Iraqi labor leader, sharing the stage with the defendants.
§The Truth
by Brian Covert / Independent Journalist Friday Jul 20th, 2007 5:40 AM 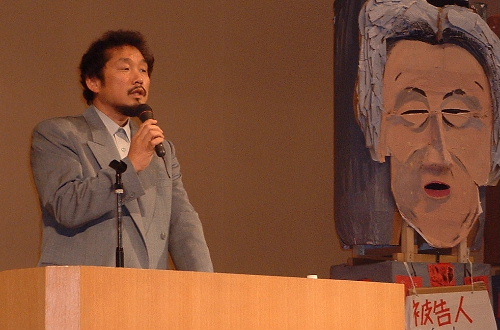 Independent journalist Akihiro Nonaka, head of the Tokyo-based company Asia Press International: "Koizumi says that international aid is a matter between governments, not NGOs. But I think that is absolutely mistaken."
§The Appeal
by Brian Covert / Independent Journalist Friday Jul 20th, 2007 5:40 AM 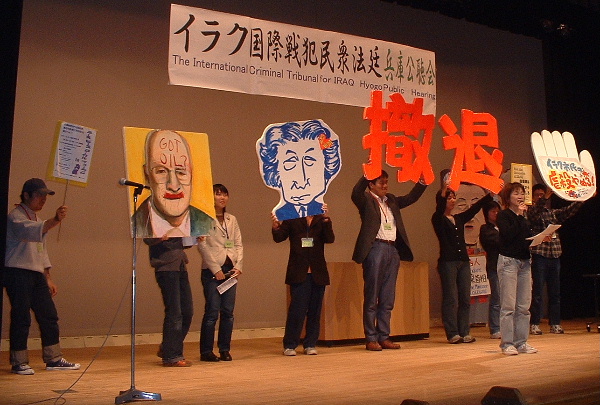 The daylong tribunal on Iraq winds to a close with final words from activists hoisting the characters TETTAI (Withdraw). Other signs include a blue caricature of Japanese prime minister Koizumi and U.S. vice president Dick Cheney ("Got Oil?").
§The Judgment?
by Brian Covert / Independent Journalist Friday Jul 20th, 2007 5:40 AM 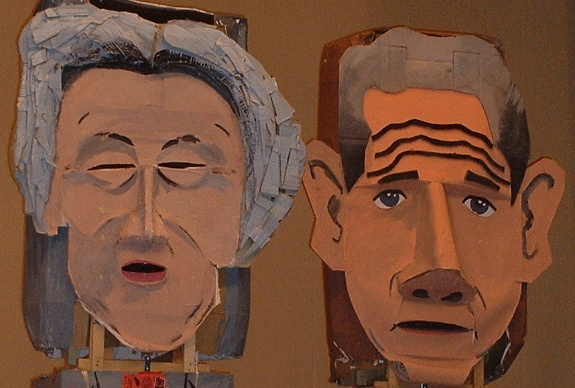 How will the International Criminal Tribunal on Iraq eventually judge the actions of the two defendants? Stay tuned to continuing coverage to find out....
Add Your Comments
LATEST COMMENTS ABOUT THIS ARTICLE
Listed below are the latest comments about this post.
These comments are submitted anonymously by website visitors.