by Mike Rhodes (MikeRhodes [at] Comcast.net)
A protest was held in north Fresno today to call attention to the homeless situation in this community. The protestors were attempting to get the attention of mayor Alan Autry, who they say has not fulfilled his promises to improve the lives of the over 8,000 homeless people in Fresno. 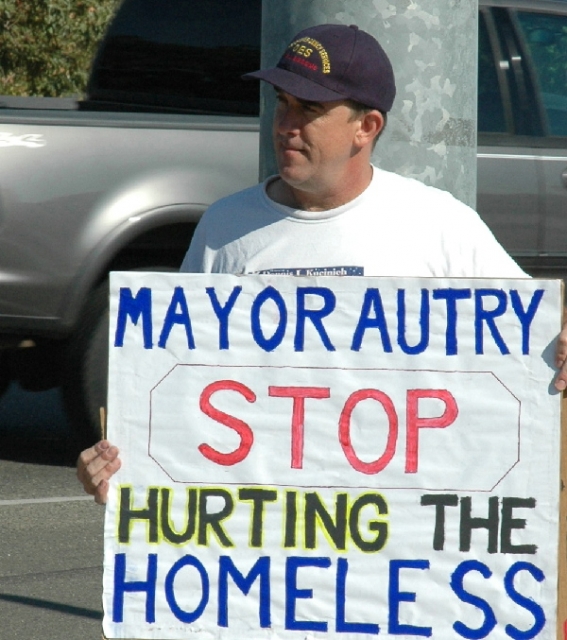 Kelly Borkert and Al Williams held a protest on Fresno mayor Alan Autry’s home turf today. They were on the corner of Friant & Fort Washington, in north Fresno, holding signs calling on the mayor to stop hurting the homeless. As traffic roared by, Kelly explained why he were there, “I think this is the best place to catch the attention of mayor Alan Autry, this is where he works, his business office is here, he runs the city from here, and I figure he can’t miss the message from here.” Kelly told me that mayor Autry spends a lot of time at the Starbucks coffee shop at this location.

Asked what the message was, Kelly replied that “we want a different line of attack on the homeless problem, not fields of goatheads and latrines that they might sleep in.” Kelly said that the mayor and city council members were out of touch with the reality of homeless residents and he was there to draw attention to the problem.

Williams, who is homeless, said he was there “because back in February at the Homelessness radio Marathon, Autry made a bunch of promises he never kept. He said he was going to come and see my wife who is in a wheelchair and handicapped. He had tears in his eyes and everything but then he never came, he never showed up. He made other promises to the homeless that he has not fulfilled and we are here to hold him to those promises. The mayor should set an example and not tell lies.”

I asked Al what he thought the mayor should do to help the homeless. He said “There should be a place where they can go and get a shower, do their laundry, a work force similar to Labor Ready set up so people who need work done could call and get someone to do the job. A place where the homeless could get employed without having everyone else get rich off of them. Let the people work themselves back into society. You know, there are a lot of educated people out there that have college degrees. There are a large number of veterans out here (who are homeless). They were good enough to go and fight for this country and go into the military and they would like to get a job, but they need help. You can’t get a job if you can’t take a shower, you need clean clothes, a shave, do your laundry, and that is cheaper than the route the mayor is going in now.”

Borkert agreed, saying that homeless people also need a safe place where they can stay and store their property. “The city should not be pushing people out of shady underpasses and into the most desolate parts of downtown.” 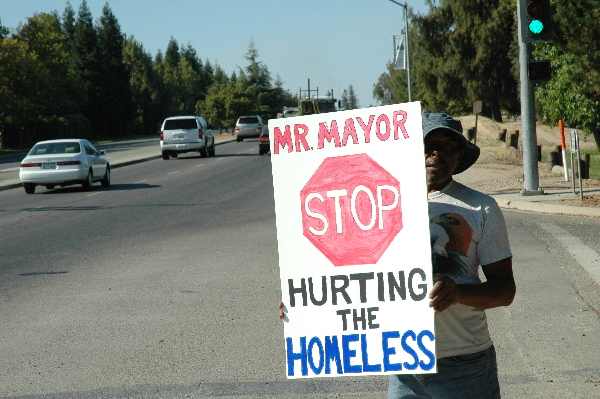 Al Williams, a homeless man from the Roeding Park area held this sign at of Friant & Fort Washington, in north Fresno. Al said they were there because the mayor spends a lot of time at the Starbucks restaurant on this corner. 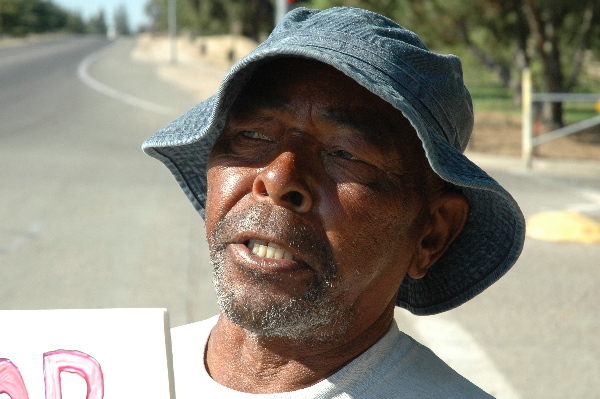 Al said that Fresno Police officers have told homeless people in Roeding Park that they would no longer be allowed to “lounge about” in the park. According to Al, the officers threatened to arrest homeless people if they were laying or sitting on the grass in the park, starting on Saturday, July 14. The park is closed to the public from 10 PM - 6 AM, but Al says these threats are directed to any homeless person in the park during the day or night.

END_OF_DOCUMENT_TOKEN_TO_BE_REPLACED
§3:50 minute video
by Mike Rhodes
Copy the code below to embed this movie into a web page:
Download Video (14.2MB) | Embed Video
Photos and video by Mike Rhodes
END_OF_DOCUMENT_TOKEN_TO_BE_REPLACED
Add Your Comments
Comments (Hide Comments)
§a couple of questions
by ahmed
Mike, if this guy has a wife who is "handicapped and in a wheelchair", she should be on SSI, which would get her almost $1000 a month. A cheap apartment can be rented on that income in Fresno. Why is she homeless?

Why does the city of Fresno need to set up a job facility "like Labor Ready"? What is keeping these people from actually going to Labor Ready?

How many of these people are in AA or NA if they have substance abuse problems? One can attend AA and NA for free, and there are groups all over Fresno. Substance abuse is a major impediment to working, so are these folks in a group? If not, why?

How many have applied for GA in Fresno? There are job assistance programs in GA. Have they availed themselves of these opportunities? (Yes, GA has rules! Gasp! Deal with it).

How many of these people have no family in Fresno, but just drifted into town? Why do the taxpayers of Fresno need to take care of drifters?

These, and many other questions, arise around the issue of "the homeless". Blaming Autrey for not doing "enough" for these people is unfair to him and to the taxpayers of Fresno. Many of these folks could work but choose not to. Many could access other income and services, such as VA services, but are they doing so? If not, why? Fresno has a very large VA hospital with outpatient serivces, including psychiatric and social work units. Have these been contacted? (yes, it often takes a while to work the VA system. Start now. )

The kneejerk "blame everyone else for not taking care of me" syndrome of homeless people is very familiar to many of us. It would help if these people would understand that it is up to THEM to make an effort, rather than sitting around waiting for Fresno to "do" something.
Add a Comment
§questions and answers?
by kelly
you seem to be answering your own questions replete with the suppositions necessary if you are unable to gather real data by asking the homeless themselves. The reason we need to speak out directly to the Mayor's failures relates directly to what you are doing as well. With no authentic information as to the circumstances of any particular individual, you supply a disconnected diagnosis and prescription. Among other things, during the Homelessness Radio Marathon the Mayor whittled the problem (and responsibilty) for the homeless problem down to each individual's issue with drugs and alcohol. Drawing from his own dark experiences in Hollywood, Mayor Autry was able to sense how simple the root causes and bootstrap solutions were. Nevermind the clearly flawed simplification, lets go with it for a little bit.
WHAT ARE THE RECOVERY RATES FOR SERIOUSLY CHEMICALLY CHALLENGED INDIVIDUALS?
I dont think theyre very encouraging when you look at actual results. But lets stay on that Angel's Highway to sobriety and assume anyone can travel. Never mind that EVERYONE of us knows someone who has lost the battle to alcohol, that there are people predisposed to major problems STATISTICALLY or MEDICALLY incurable. What would you like to do with or for those people so doomed to difficulties and death?
Myself, if I were treated like unwanted trash and subject to beatings or harrassment by security guards and police, rape and murder by all sorts of people encouraged by the city's open hostility to homeless, Id sure like to find an escape, and a homeless person with a drug problem is much easier for me to understand than the behavior of citizens and (even more) those politicians who would never fail to pose as God Fearing Red White and Blue Christians FAILING COMPLETELY TO BEHAVE AS SUCH, no matter how many opportunites present themselves.
The statements made by city officials regarding the perceived problems of the homeless demonstrate only ignorance and indifference.
Their actions, on the other hand show heartless, malicious intent, and that wont be hidden by PR stunts and false promises dutifully reported without question by connected interests. This situation will be documented and known widely someday soon. All to Fresno's eternal discredit if we dont stop this foolishness now.
Add a Comment
§well it doesn't really matter
by ahmed
Once again, your point is moot.

It is NOT the responsibility of the taxpayers of Fresno to pay for these problems.
Add a Comment
§yes they are, Autry and all of them expect you to pay for their mistakes.
by kelly
you would be right if you meant that no one is asking Fresno to "pay for their problems"
what is really being asked is not to make their problems for them.
Since this crew of righteous christians sees fit to sieze and immediately destroy property (birth certificates, prescription medicines, family photos, live animals) in violation
of common decency and constitutional protections,
YOU WILL be paying for the judgement against these hamfisted mistakes, so you might want to look at the reality of that.
Hard to say how much money is left in ye olde lawsuit damages fund... Better start handing out traffic tickets.

Add a Comment
§Valid Point
by Dan
Personally, I feel it should be mandated that any homeless person accessing social services should be mandated mental health or chemical dependency treatment, if indicated. If the person declines, then no services.

San Francisco's approach to their homeless has achieved results for both the homeless and for the city. Homeless folks receive services, not cash, from the city and many have been placed in permanent housing. What homeless advocates don't like is that the folks who don't accept services are urged to move on elsewhere.
Add a Comment
Support Independent Media
We are 100% volunteer and depend on your participation to sustain our efforts!