by Mike Rhodes (mikerhodes [at] comcast.net)
Lupe Garcia (photo below) is the City of Fresno’s next target in its war against the homeless. The city might not have a plan to end homelessness, but they are working hard to eliminate the homeless. Details below. 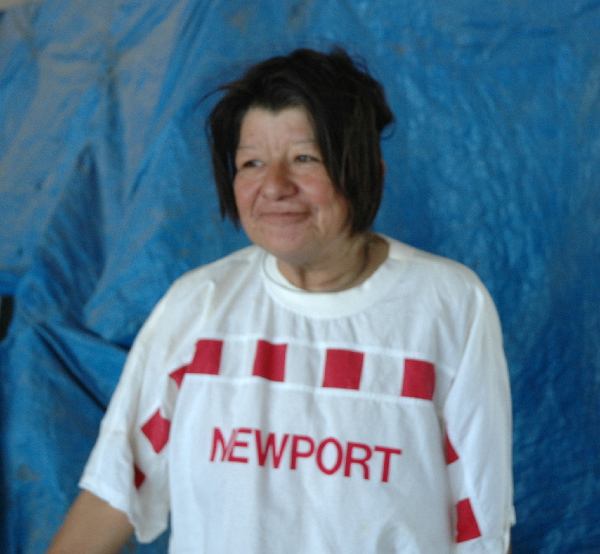 The homeless in downtown Fresno once again find themselves under attack, this time being forced from shady shelters out into the blazing sun. This week the eviction is taking place just south of Ventura on Santa Fe in downtown Fresno. Lupe Garcia moved to this shady quiet street about 2 months ago after being forced to move from another encampment, about 200 yards away. She told me that in one month, she was forced to move four times. A business owner in the area told me he was asked by the police to press trespassing charges against homeless people who lived near his store.

Garcia does not know where she is going to go next but says that city workers told her about a lot that the city is buying where she can stay. The lot these workers told her about is at Railroad and Cherry avenue, about a mile southwest from where she is now. That property has not yet been purchased by the city and there is significant opposition from nearby business owners. Some homeless people are calling it a concentration camp and vow not to be forced to live there.

This eviction comes about two weeks after an ordinance was introduced to the City Council that would make camping on city property a crime. It also follows a Caltrans eviction and clean up near California and G street that removed about 50 homeless people. Both this week’s eviction and the earlier one moved homeless people who were sheltered under an overpass and forced them to new locations. The Caltrans land has now been fenced in. The lot, referred to by city workers, has no shade and weather projections show that it will be 110 degrees in Fresno later this week. Numerous homeless people have told me that one strategy used by the city is to remove them from areas that have shade. Cynthia Greene, who is homeless, said “if homeless people start hanging out and talking under a tree, the city will come by and chop that tree down.”

One exception to this rule seems to be the H street encampment where the city has not only allowed people to live under an abandoned overpass, but they are even providing them with amenities. I stopped by the H street encampment today and talked to Joanna, Austin, and Randy. They said things were fine at this encampment, which many homeless people have named New Jack City. In addition to the ample shade, the city provides portable toilets and a trash bin. I was told that the trash bin is emptied every other day and the toilets cleaned daily. “The toilets are kept clean and the other day they even brought out water so we can wash our hands,” Joanna told me. The facilities come with lighting at night and a full time (24/7) guard. The H street encampment has grown as the residents of other encampments have been evicted. There are about 100 people living at New Jack City at this time.

Lupe Garcia, at the Santa Fe encampment, said the police had come by on Sunday (yesterday) and removed everyone’s shopping carts. The city recently passed an ordinance that outlawed having a shopping cart. Homeless people’s shopping carts were also taken from in front of the Poverello House (a center that provides services for the homeless) on Sunday. Joanna said that the shopping cart raid resulted in “everybody’s stuff being dumped out on the ground. The little piles were neat and all in a row. . . they kind of looked like something you would see in a graveyard.”

The signs posted on Santa Fe indicate the city will be back on Thursday, July 5 to carry out the evictions.

For an index of articles and documents about the struggle for civil liberties for homeless people in Fresno, see: http://www.fresnoalliance.com/home/homelessness.htm

###
END_OF_DOCUMENT_TOKEN_TO_BE_REPLACED
§The encampment and the Sign
by Mike Rhodes 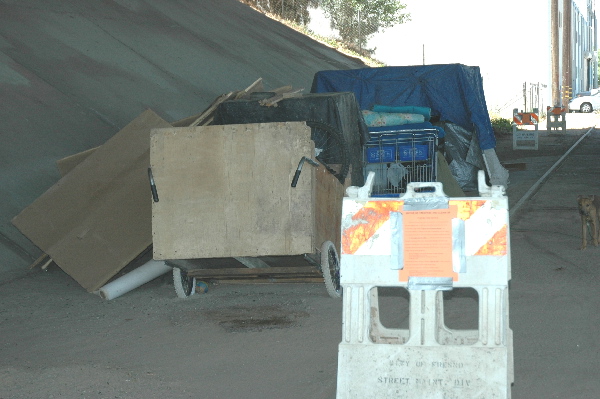 This is where Lupe and several other homeless people live. The encampment is under an overpass in downtown Fresno. All photos by Mike Rhodes 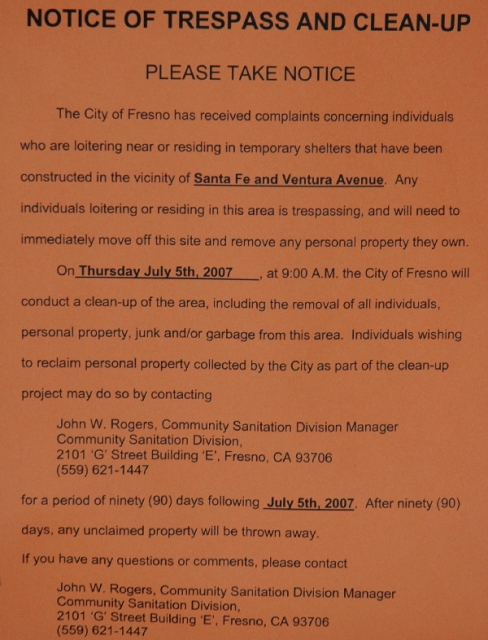 
Caltrans.. is California Department of Transporation.. other states call it DOT with the states initials.

Hope you can call

Add a Comment
§Cathode, Anode, Lets call the whole thing off
by Anon-o-mouse
I guess euthanasia is out of the question? Probably we will need to start by making them all cary cards. If that doesn't work, I suggest laser branding barcodes on them or tagging their ears or implanting identity or GPS chips. Something that emits a shrieking 70 decible noise when in the proximity of three or four other chips. Those that survive the forced Caltrans showers and workcamps can go on to special assignment and be allowed to live with their personal property or other items of detritus in a fenced in overpass. The best and brightest sonderkommando would then be selectable for reeducation and a career at the DMV. Of course any wages would need to be garnished to pay back EDD or the Caltrans Nonelective Work Authority Contractors. Are you listening, you proto-nazis? Some good ideas here. I was thinking of writing a fictional account, but maybe I will just wait and see if it makes it on to Reality TV. BUMFIGHTS! A fair warning to good hearted social workers: history tells us that you will be the second to go. It will be easier for Caltrans to round you up if you are found in the near vicinity of the flock you wish to protect. Don't laugh, this isn't the delusion of som misanthropic 13 year old taking a break from World of Warcraft to abuse the first likely victim this is a sorry commentary on the way our country is spiralling into facist oblivion.
Add a Comment
Support Independent Media
We are 100% volunteer and depend on your participation to sustain our efforts!