Add an Event
Newswire
Calendar
Features
Home
Donate
From the Open-Publishing Calendar
From the Open-Publishing Newswire
Indybay Feature
Publish to Newswire
Add an Event
Related Categories: Santa Cruz Indymedia | Government & Elections
Public Records, even just one? Only if you agree to pay!
by Thomas Leavitt (thomas [at] thomasleavitt.org)
Saturday Jun 30th, 2007 2:19 PM
The Saga Continues... we are told that public records will be held hostage unless we pay up. 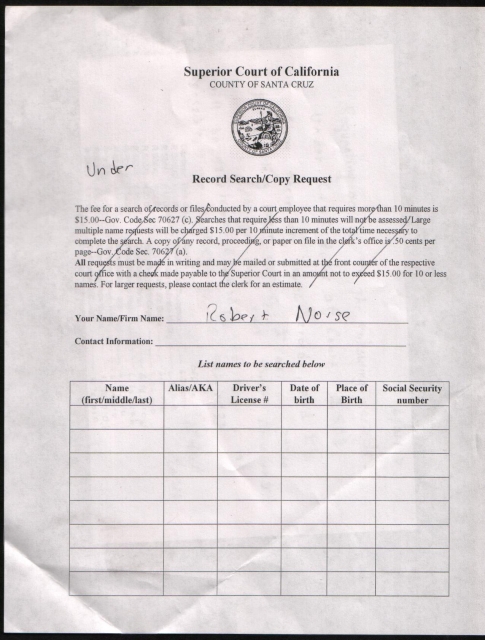 original image (1275x1680)
Last Weds. (June 27th, 2007), I went to the Santa Cruz County Superior Court Records Office, and requested the court records for a single citation of a single individual. I had the person's name, the citation #, and the date of the citation.

After a brief interchange with the clerk at the window, I was told that a printed copy of the record would be available the next day in a room upstairs, and that it would cost 50 cents a page. When I responded with a question as to whether I could see the documents without paying the 50 cents and having to leave a blank check, and asked if an electronic copy was available instead of a printed copy ("no"), the clerk at the window seemed to catch on that I was part of this ongoing saga - she asked me whether or not I was the person named in the record (which is irrelevant).

After I answered, "they are for someone I'm working with", she immediately left the window, and after several minutes (and presumably a consultation with her superior), came back with the attached form (a form obviously not regularly used, since it was not available at the window... one could speculate as to whether or not other members of the public ever see this form).

I asked her whether or not filling in any of the fields in the form were mandatory, and she replied "No, but that the less information they have, the longer it will take to retrieve a document." We had a discussion back and forth about the contents of the form - I pointed out that the form didn't contain a field for a citation #, and she told me that a $15 minimum charge would apply if the research request took over 10 minutes (effectively a $90/hr. charge, $15 for every 10 minutes). In response, I asked whether or not they could simply stop once they reached the 10 minutes, and whether or not there was any way to have a search initiated, even for just a single record, without having to agree to pay the $15.00. She disappeared again, saying she would have to check on this with her superior, and when she came back, I was told that if the search took over 10 minutes, that I would not be allowed to examine the documents until I had paid. There was clearly no option to simply request even a single record without incurring the risk of a financial liability.

At that point, I decided I wasn't interested in actually making a request for documents under those conditions, and started to walk away... the clerk immediately protested that I couldn't take the document with me, and my reaction was something to the effect that "this is just a form, its a public document, that doesn't seem reasonable at all". At that, she relented, and I left.

I will be contacting the California First Amendment Coalition and CalAware with this info, as I believe this is an unreasonably high barrier to access otsensibly public information.

This was at least our sixth trip to the window, Robert Norse visited the window a couple of times subsequent to our prior posting on this subject, and this is his report:

Hostility from the Infraction Window

On Wednesday June 20th, I returned to the infractrions window in the basement of the County Building to pick up the four Infraction print-outs to look at that I’d requested a week before on June 13th. At that time, I’d been told on making that request that they’d be available at a cost of 50c per page, or, (when I explicitly insisted) for viewing free.

When I got back the clerk took offense to my openly tape recording our conversation. She refused to give her name or her boss’s name (which was silly, since she was the only African-American woman on the counter down there and fairly easily identifiable).

I tried to reassure her that ithe tape recording was legal, wasn’t personal, and was only being done because to documen the refusal of the courts to provide records they were required to provide. And to document as well that I was not “creating a disturbance” as Supervisor Tess Fitzgerald had claimed on two occasions (May 23 and May 24), calling deputies down to remove us by force.

The clerk again declined to get me the records, saying the windows upstairs were now closed, and that she wasn’t sure of their hours. She also declined to get her supervisor, suggesting she was busy or “in a meeting”.

The next day (Thursday June 21) HousingNow! in Calfiornia activist Linda Lemaster and I were buzzed into a locked room. ID is normally required for admittance to this room, which is for typically used for viewing misdemeanor and felony records on the main floor right next to the Criminal Court windows. A different set of clerks were friendoy and helpful. They did suggest it would cost 50c a page to copy the records (which is, of course, unreasonable). Instead we took notes.

Two months before, had I requested print-outs of these four records downstairs, they would have been given to us without charge in less than five minutes. Now they are requiring two trips and a day’s delay. And were only willing to do it in lots of five records or less per visit. Since we needed to view 250-300 camping tickets to find out how much damage the police and courts have been doing to the homeless, this was going to take quite awhile at the pace illegally being imposed by Alex Calvo, the Court’s Chief Administrative Officer.

The next day I returned with HUFF supporter Linda Lemaster. We spoke this time with a woman who said her name was Patricia and did not become hostile as we tape recorded. I presented her with a written public records act request [shown below] which asked to review the infraction records of 10 cases.

The week before Melody had asked that we wait a day to get records. She further suggested we ask for 4-5 a day so as not to take more than ten minutes of the court’s time looking for them. This was in accord with Court Administrator Alex Calvo’s May letter suggesting that any requests taking mroe than 10 minutes would be charged $15 for each 10 minutes or fraction of 10 minutes thereafter.

I tentatively agreed to this, but on reflection realized, that since we needed access to 300 records, this would have take us months to access public records in a process Calvo and his subordinates had delayed for over a year and that should have been available within 10 days. Additionally it would have required us to return to the courts daily, then wait a day and come back and view the records, put in another request, wait another day, etc.

Since I’d not come back for a week, I presented Patricia with a list of 10 names, incident dates, citiation numbers, for violations of the Camping Ordinance as well as the statutory authority for our request (California Rules of Court rule 2.503).

On the advice of a hidden superior (who would not come out, though we requestedto speak with her) Patricia refused to accept the form./ Instead she handed me a second form [pictured below] seeking social security number, driver’s license, and date of birth as well as threatening a $15/ ten minute charge for any period over the initial 10 minute period.

The clerk refused to accept the request, though we offered to split into two five-name sections, one from myself, and one from Linda. She wouldn’t give Linda the record of one person she was seeking independently, saying that she’d have to fill out the form and wait a day (instead of looking it up and printing it out immediately--the standard process).

Patricia refused to take my written letter directed to her or her superior formally requesting to view the 10 records and return me a dated copy indicating I had presented it to her.

I was told to return the next afternoon and talk with Melodee, Tess’s superior. She then closed the window on me, noting I was stopping the person behind her from being served. When I walked away from the window, she opened it again, saying “I only did that to get rid of him.”

The struggle to get public records continues. 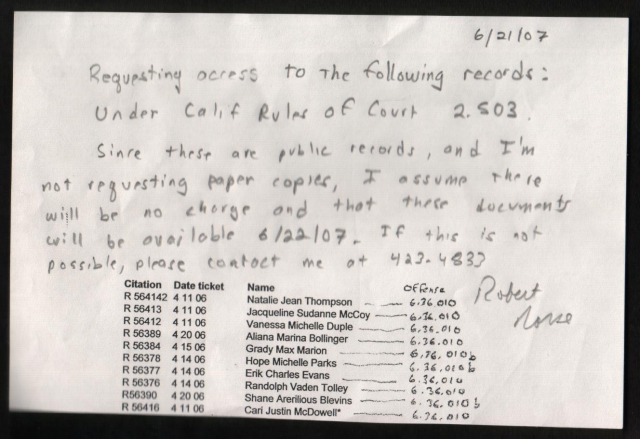 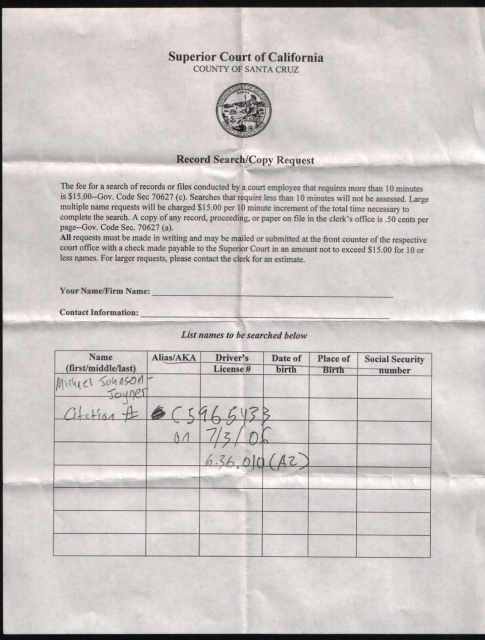 §History of the Courthouse's Circus of Confusion
by Robert Norse
Saturday Jun 30th, 2007 3:47 PM
"Not So Public Records" also by Thomas Leavitt documents prior attempts to get the same public (Sleeping Ban) records:

"The fees collected under this section shall be distributed to the court in which they were collected.
(a) The clerk of the court shall charge fifty cents ($0.50) per page to cover the cost of preparing copies of any record, proceeding, or paper on file in the clerk's office.
(b) For comparing with the original on file in the office of the clerk of any court, the copy of any paper, record, or proceeding prepared by another and presented for the clerk's certificate, the fee is one dollar ($1) per page, in addition to the fee for the certificate.
(c) The fee for a search of records or files conducted by a court employee that requires more than 10 minutes is fifteen dollars ($15) for each search."

The Napa County Superior Court explains how the search charge works at http://www.napa.courts.ca.gov/Criminal/crim_search.htm
http://www.calaware.org
Add a Comment
§Update: Some Records Released But the General Stonewalling Continues
by Robert Norse
Friday Dec 28th, 2007 10:39 PM
In late August, Melodee Parmenter finallyh agreed to make available twenty records per week for viewing without charge. She is required to provide--and adjacent counties do provide--access to whatever infraction records you want. However local attorneys were unwilling to approach the court with a formal writ to require the records department to follow the law.

After 4-6 weeks, the court stopped providing the records requested. They have provided no new records since September, though they have kept the 100 or so records they have provided available for continued viewing. With all the time, trouble, and earlier obstruction, we were unable to schedule volunteers to view all or the bulk of the records in a timely manner last summer.

Parmenter's subordinates have also adopted a capricious policy of refusing to allow us to view any records except our own individual cases, without a delay--usually of at least one day. This is a delay not experienced by attorneys or others approaching their windows, as far as I know, and seems to be a form of punishment for our legal demand to see infraction records.

The obstructive behavior of Alex Calvo (Court Administrator), Parmenter, and Fitzmaurice have slowed down our Sleeping Ban Lawsuit case, with significant impact on those living outside, who might by now be protected by a decision such as the Jones decision in Los Angeles, overturning their Sleeping Ban. Those who can't sleep together with protective gear, may freeze or grow ill if forced to sleep separately.

We have not given up and will probably get the requested records (plus several hundred others)--documenting a pattern of Sleeping Ban harassment that targets the homeless, if necessary through a subpoena process.

We may also return to the court windows with video cameras and media in tow to free up public records that are currently being held hostage.

If you are interested in helping, contact us at 831-423-4833.
Add a Comment
Support Independent Media
We are 100% volunteer and depend on your participation to sustain our efforts!