Add an Event
Newswire
Calendar
Features
Home
Donate
From the Open-Publishing Calendar
From the Open-Publishing Newswire
Indybay Feature
Publish to Newswire
Add an Event
Related Categories: Santa Cruz Indymedia | Anti-War
Grannies Rage at Capitola Military Recruitment Center
by ~Bradley (bradley [at] riseup.net)
Tuesday Jun 26th, 2007 11:51 PM
On June 26, protestors converged on the Military Recruitment Center in Capitola "to end the war in Iraq now, and to work for a future of peace and justice for all beings, in all places." The Capitola recruiting offices for the Army, Air Force, Marines and Navy are staffed by pompous and deceitful representatives of the the world's largest and wealthiest terrorist organization. The recruiters seem to believe the lies and exaggerations they repeat ad nauseum. 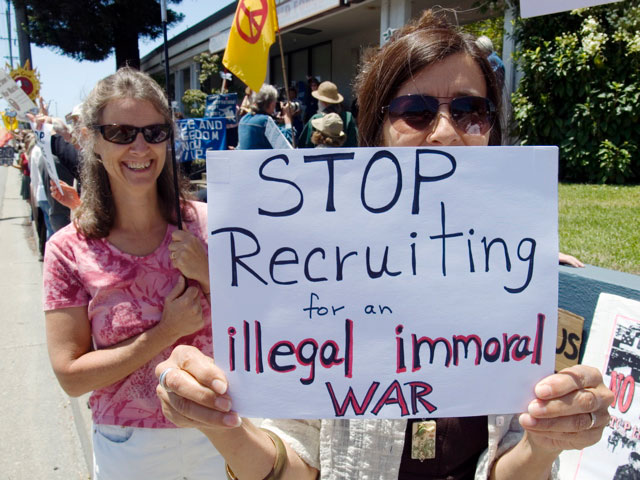 Protesters lined 41st Avenue with signs and banners calling for an end to the occupation of Iraq and supporting military resisters. The Raging Grannies of the Santa Cruz Chapter of the Womens International League for Peace and Freedom led people upstairs to the Army recruiters. The Grannies had planned to speak with the recruiters, but they were denied entry into recruitment office. The recruiters informed the Grannies that they "do not qualify to join the Army, but are welcome to send care packages to the soldiers." Ruth Hunter of the Raging Grannies quipped back that she did not like the sexist nature his statement.

At least two Capitola police officers monitored the demonstration. Army recruiters called the police to clear the door to the recruitment office which was being blocked by Ellie Foster and Jan Harwood of the Raging Grannies. A commanding police officer was called to the scene before any arrests were made. The property manager was also called so that he could officially and politely request that the Grannies clear the door. This request was witnessed and video recorded by officers from the Capitola Police Department. Officer Andrew Dally then read a short statement, three times over a period of about five minutes, on behalf of the people of California and declaring an unlawful assembly. The demonstration ended with ten people arrested for nonviolent civil disobedience, including David Hofvendahl and his sixteen year-old son, Trevor, as well as eight members of the Raging Grannies. 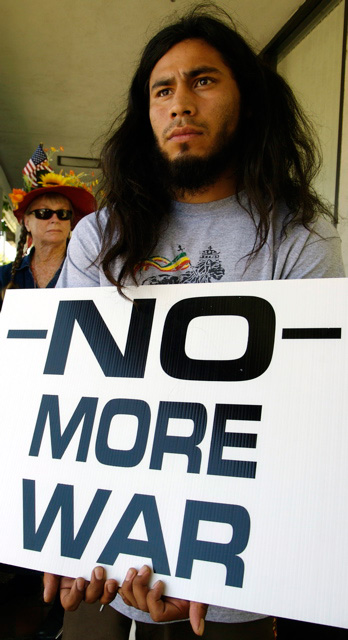 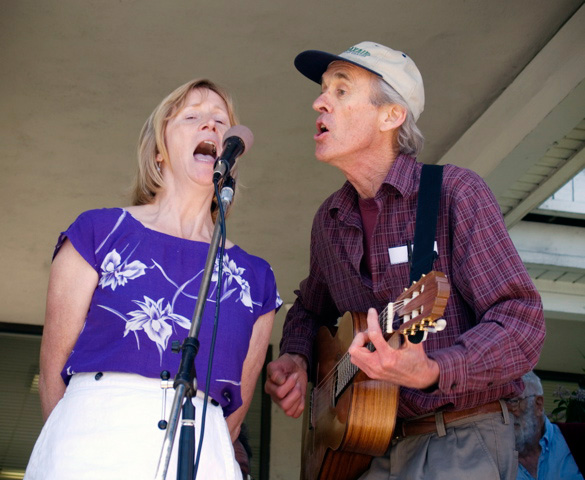 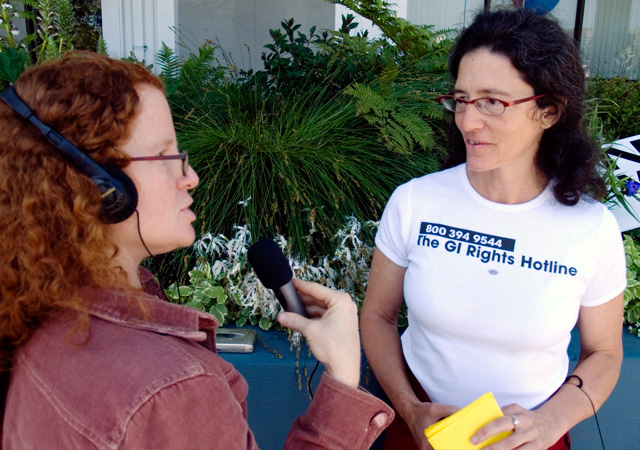 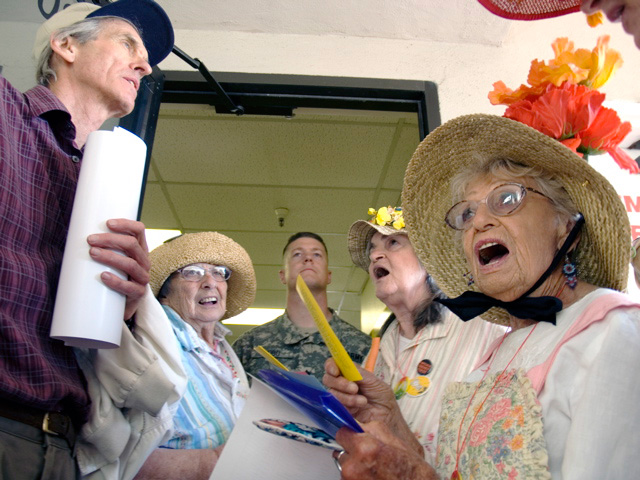 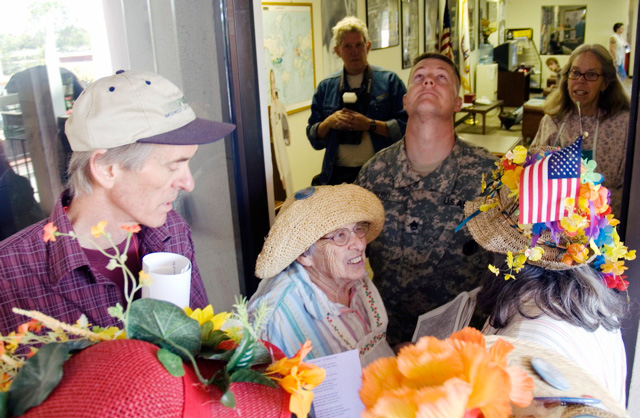 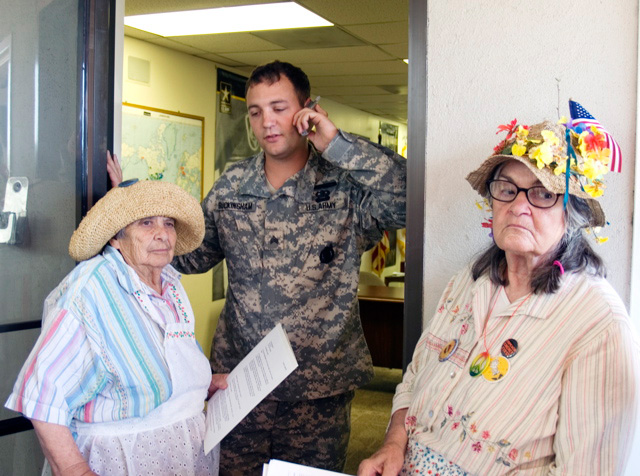 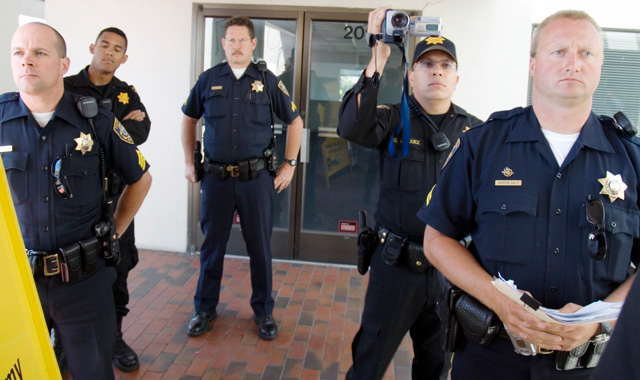 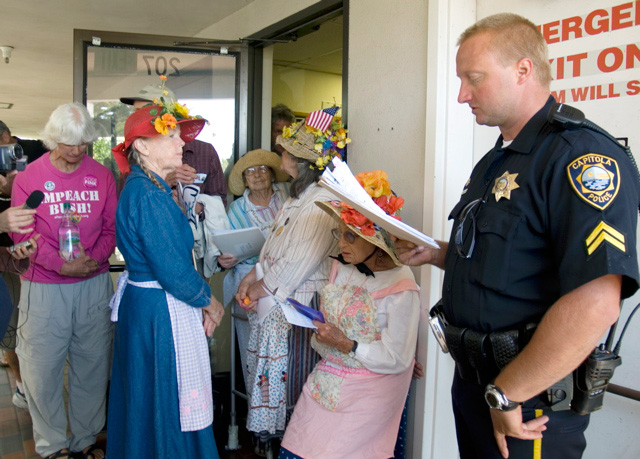 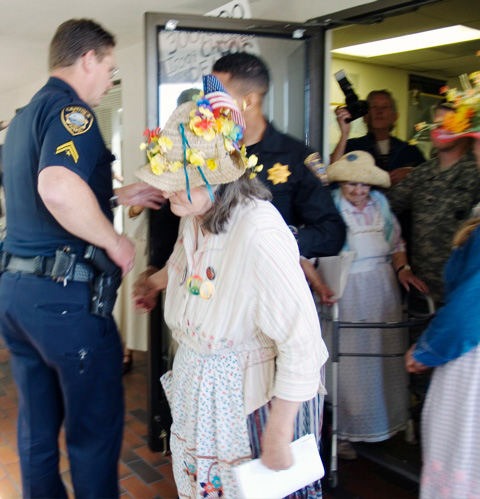 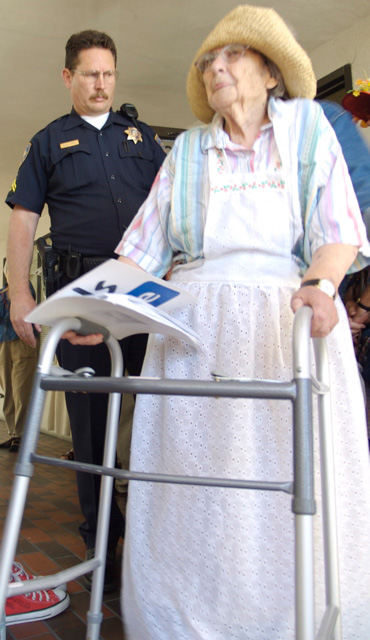 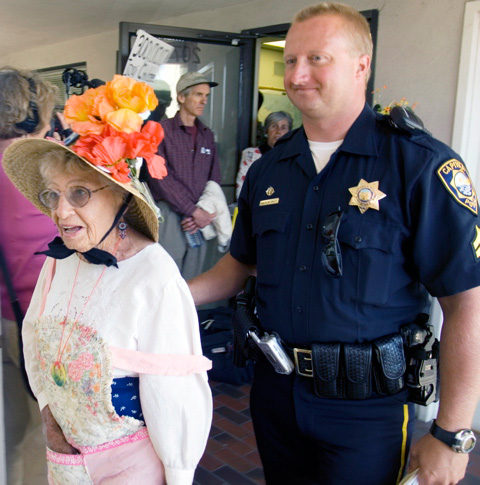 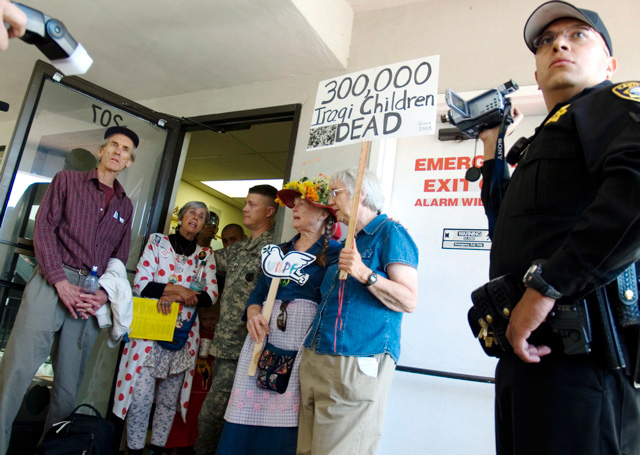 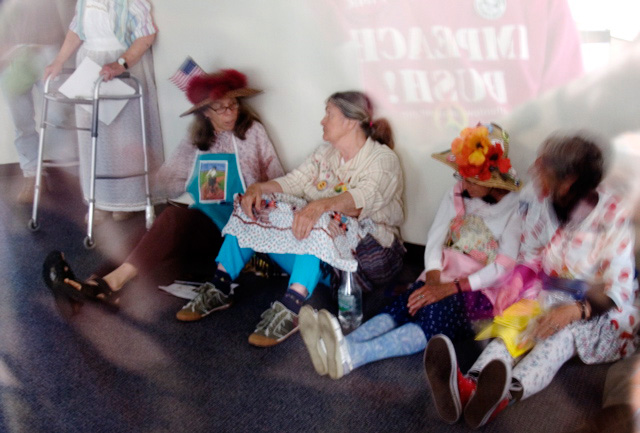 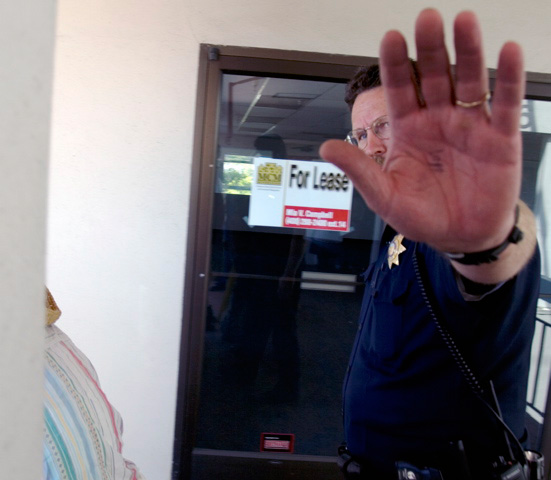 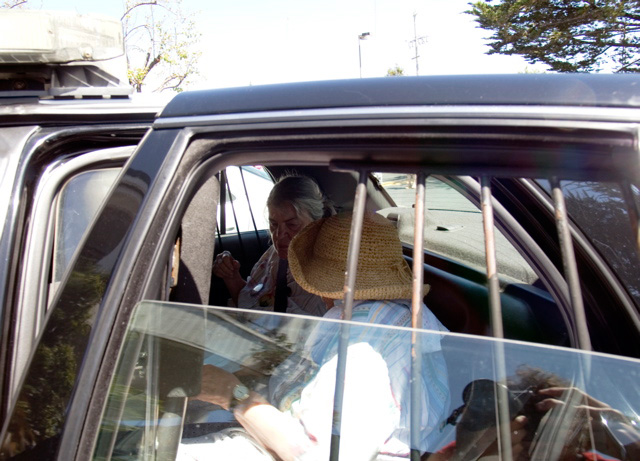 §go grannies!
by raging granddaughter
Wednesday Jun 27th, 2007 12:22 AM
that recruiter looks like, geez, i gotta deal with this today? ha! go grannies!
Add a Comment
§Ellie Arrested...fantastic photo!
by Granny Ruth R
(info [at] raginggrannies.com) Wednesday Jun 27th, 2007 4:11 AM
Bradley: Congrats on wonderful photos. My favorite is Ellie Arrested...the expressions are 'priceless' to use an overused word.
Santa Cruz Grannies...way to go!
Congrats from your sister Grannies of the Peninsula Action League.

http://www.raginggrannies.com
Add a Comment
§Gabriola Grannies in Canada
by Granny Jean
Wednesday Jun 27th, 2007 6:59 AM
You are wonderful. People like all of us Grannies can change the world, one by one and two by two.
Love and hugs and get up off that damn floor and make them bring chairs. Love Jean
Add a Comment
§hippeee grannies
by linda
Wednesday Jun 27th, 2007 11:42 AM
Those were wonderful pictures. You go grannies. We don't have a chapter up here in Vermont, at least not that I know of....thanks for keeping me updated on your activies. From the lesbian grandmothers in Vermont. Linda
http://lesbiangrandmothers.org
Add a Comment
§Iraq Vet Thanks Granny
by Jeff Key
Wednesday Jun 27th, 2007 12:23 PM
This is one Iraq Vet who's glad he's got Grannies on his side.
Add a Comment
§Grannies Rage in Capitola
by Jan Harwood
Wednesday Jun 27th, 2007 1:59 PM
As one of grannies who got arrested, I recommend everybody do some non-violent civil disobedience. We've got to stop this war the rest of the "Endless War" we are stuck in. Besides, it was great Fun!
http://wilpf.got.net
Add a Comment
§Good work from the Tucson Raging Grannies
by Margaret Pecoraro
Wednesday Jun 27th, 2007 10:51 PM
Keep working. We will end this war yet.
http://www.wilpftucson.org
Add a Comment
§More from Tucson Raging Grannies
by Carolyn Trowbridge
Thursday Jun 28th, 2007 12:46 PM
Your strength and humor shine in these pictures. You are fabulous. We will stop this war!
Add a Comment
§You Go Grannies!
by Kimberly Monson
Sunday Jul 1st, 2007 6:32 PM
Once again, I applaud your courage for standing up & speaking out! I have to agree, the expressions in the photos are priceless, esp. the guy looking up towards heaven..I would love to know what he was truly thinking..

The war in Iraq must be stopped! Go Grannies, Go!

Kim
Add a Comment
§Good going Grannies
by Deb Livingston
Sunday Jul 1st, 2007 9:29 PM
What would the world be without brave grandmothers for peace? Go grannies!
Add a Comment
§Next Time at Assemblyman Laird's Office? (corrected)
by Robert Norse
Thursday Jul 5th, 2007 3:56 PM
When's the next demonstration? Any specifics on the charges and court dates?


Meanwhile how about a protest at Assemblyman's Laird's office?

Last month he voted (along with a unanimous Assembly) for AB 221.

This is a bill that divests the California Public Employees’ Retirement System
(CalPERS) and the California State Teachers’ Retirement System (CalSTRS) from Iranian investment (with certain exceptions) until (a) Iran has been removed from the United States Department of State’s list of countries which have been determined to have repeatedly provided support for acts of international terrorism. and (b) The President determines and certifies to the appropriate congressional committees that Iran has ceased its efforts to design, develop, manufacture, or acquire a nuclear explosive device or related materials and technology.

This seems to me part of the war drive on Iran using the familiar "WMD" excuse that was used in Iraq.

Ominous parallel developments range from a U.S. build-up in the Persian Gulf, to heightened propaganda activity focusing on Iran (rather than say Saudi Arabia or Syria...or the U.S....as a source of insurgent weaponry in Iraq).

I left both e-mail and phone messages with Laird's office over a week ago asking for clarificaition. Today Alley, a staff worker there, confirmed that Laird had voted for the bill. She promised to inform Laird of my interest (both personally, as a member of HUFF ---Homeless United for Friendship & Freedom, and as a Free Radio Santa Cruz broadcaster).

Call him yourself it you wish to check out what our "progressive liberal" Democrat is doing on this issue: Call him at 831-425-1503. And let us know what he says.


Measures at the state level opposing the war (rather than encouraging its extension to Iraq as AB 221 does) are not necessarily a bad idea.

But vague initiatives or referenda on the U.S. troop presence in Iraq are of little use and too far in the future. A specific move to call back the California National Guard on the grounds that they are engaging in war criminal activity is much more to the point and much more immediate.
Add a Comment
Support Independent Media
We are 100% volunteer and depend on your participation to sustain our efforts!