Add an Event
Newswire
Calendar
Features
Home
Donate
From the Open-Publishing Calendar
From the Open-Publishing Newswire
Indybay Feature
Publish to Newswire
Add an Event
Related Categories: Santa Cruz Indymedia | Anti-War
Peace Advocates Arrested At Capitola Peace Demonstration
by Miss L. Ainie Ous
Tuesday Jun 26th, 2007 7:24 PM
Peace advocates gathered on 41st Avenue in Capitola on Tuesday, June 26th to protest the ongoing wars in Iraq and Afghanistan; the recent troop surge, which has resulted in greater casualities, not fewer; and the recruitment of at-risk youth by military recruiters, many of whom use lies and manipulation in order to get people to sign up. Ten people engaged in nonviolent civil disobedience and were arrested by Capitola Police when they stayed in front of the Army recruiting office doors when asked to disperse. 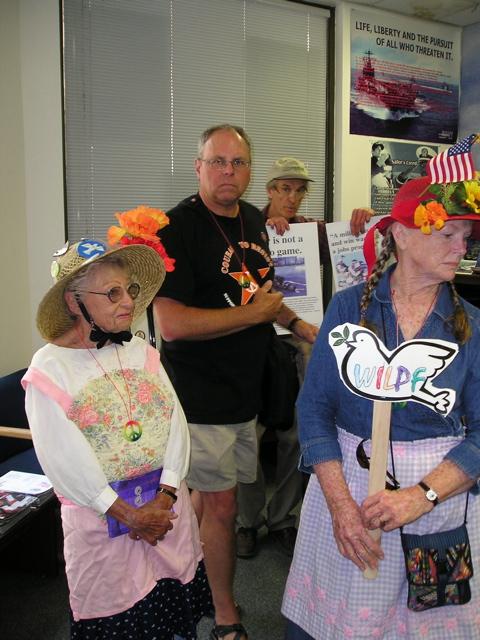 Picture: Peace advocates visit the Navy recruiting office in Capitola and challenge recruiters about their complicity in an unjust war.

Official press release from the organizers of the action:

Ten people, including a sixteen year old boy and a ninety year old great-grandmother, were arrested at the Army recruiting office at 2121 41st Avenue in Capitola today at 2:30 p.m., by officers of the Capitola Police. Sixteen-year-old Trevor Hofvendahl was arrested with his father, David. Before their arrest, they spoke with Army recruiters in their office. They expressed their concerns about the war and recruiting of youth. Trevor had received an Army recruiting brochure in the mail, which stated, “Put your 2,436 hours of video games to
good use.” The accompanying photo depicts the window and control panel of a tank, showing four men in the crosshairs. Said Mr. Hofvendahl, “Good use. That’s a lie.” He appealed to the recruiters, “I’m asking for your help. Search your own heart. Do what you can to stop the killing; you know what is going down. Let’s end it.”


WILPF member Ruth Hunter, 90, who was arrested with the Hofvendahls, said, “There comes a time when silence is betrayal.” She quoted Edmund Burke: “The only thing necessary for the triumph of evil is for good men to do nothing.”


The protesters, including members of the Raging Grannies of the Women’s International League for Peace and Freedom (WILPF), called on the recruiters to end their efforts to enlist young people. They stated that the recruiters have a legal obligation to cease recruiting for an illegal war. The Grannies, clad in aprons and flowered hats, sang several songs at the recruiting office, including “When The Grannies Rule The World,” to the tune of “When Johnny Comes Marching Home.” The refrain ends with the line, “We’ll all be safe when the Grannies rule the world!” They spent more than an hour talking with recruiters.


Ellie Foster, 81, a member of the Raging Grannies who was led away with her walker , said, “No longer should the military be recruiting young people to go to this devastating war; a war with no purpose, except, perhaps, a war for oil.”


Also arrested was Russell Brutsché, 60, who spoke to the rally before the arrests at the recruiting office. He said, “I’m here to support this father and his son who are speaking out against the seductive presentations of the recruiting brochures we see here.”

Others arrested, all WILPF members and residents of Santa Cruz County, were Jan Harwood, 75,
Phyllis Greenleaf, 64, Stephanie Keenan, 63, Barbara Riverwomon, 69, and Judy Geer, 67. They were taken to the Capitola Police station and released. No court date has been set.

File this one under Lies My Recruiter Told Me. Even if the recruiters have the best of intentions, they have no control over how and if enlistees get any money for college. In the most recent study, it was revealed that only 40% of all enlistees who were promised college money ever saw any funds at all. Even fewer actually got the amount they were promised and were actually able to finish their studies with the money.

Picture 6: Challenging the spin at the recruiting office

One man in these pictures is holding a sign that says "War is Not A Video Game." This is in reference to a massive ad campaign by the military which includes a military simulation game, ads depicting military service in video game animation and advertisements to adolescents telling them to put their video game experience "to good use" in the military.

Picture 8: Preying on those who lack strong male role models

I think they should think of them as their new slave owners, if they end up signing up for military "service" -- a contract which gives the individual no rights whatsoever.

Picture 9: The airforce office was also closed for most of the time.

But when the air force recruiter showed up, he was in his training jumpsuit. I thought that was weird since there isn't a military base within an hour from here. He was obviously wearing it to appeal to the young people who want to engage in high-risk sporting activities.

Wouldn't it be nice if all of the people he sent to Iraq could call for backup and then have all of their problems dissappear within an hour?

This peace advocate tried to convey her goodwill by sharing organic strawberries with those she talked with. It was a kind guesture and a good reminder that we all much in common. 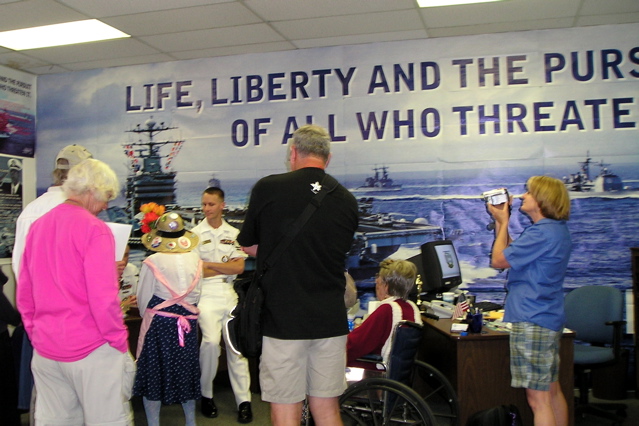 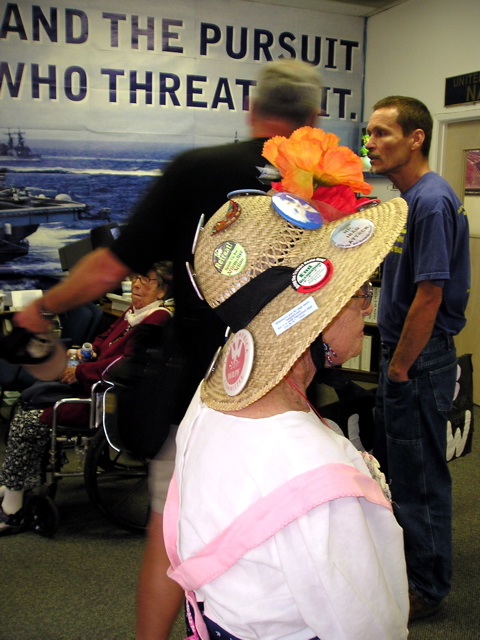 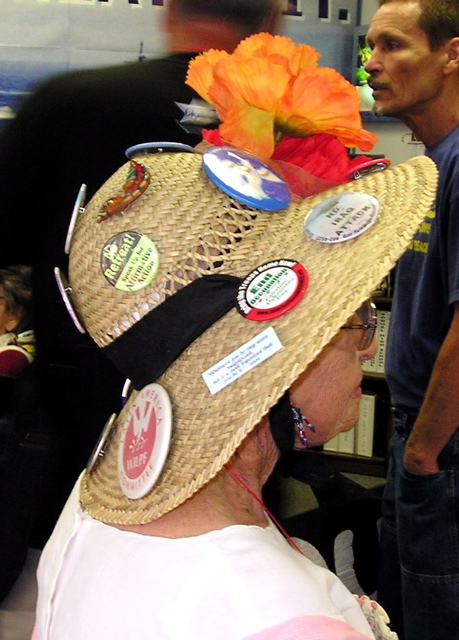 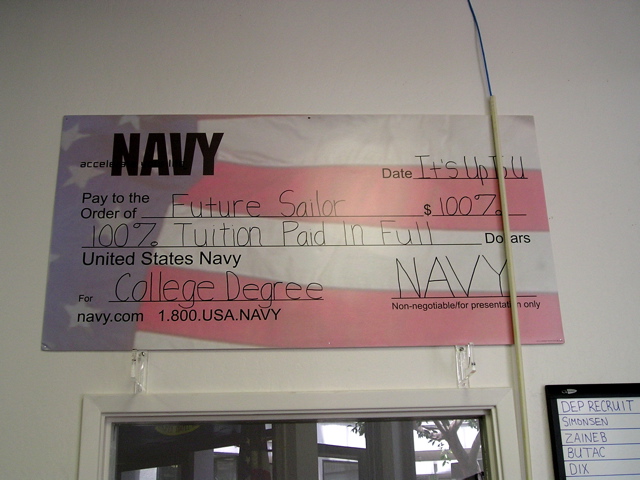 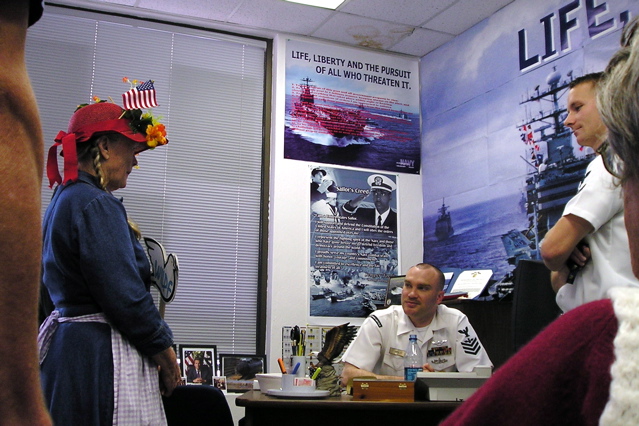 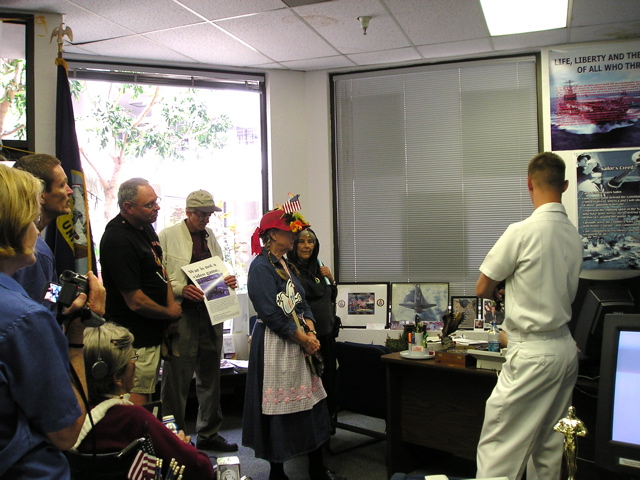 Challenging the spin at the recruiting offices
§The marines office for closed for most of the early afternoon
by Miss L. Ainie Ous Tuesday Jun 26th, 2007 7:24 PM 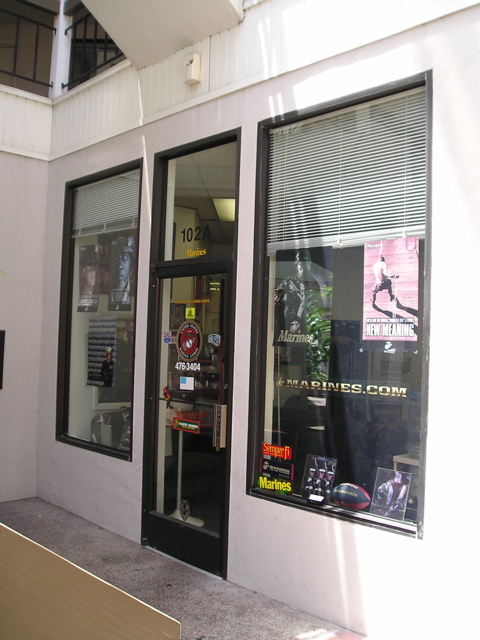 The marines office for closed for most of the early afternoon
§Preying on those who lack strong male role models.
by Miss L. Ainie Ous Tuesday Jun 26th, 2007 7:24 PM 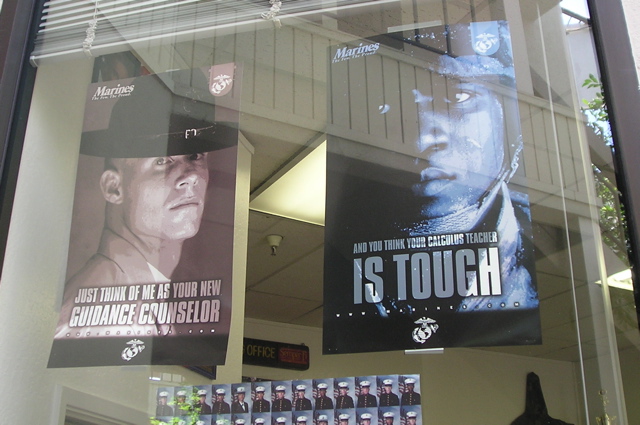 Preying on those who lack strong male role models.
§The air force office was also closed for most of the time.
by Miss L. Ainie Ous Tuesday Jun 26th, 2007 7:24 PM 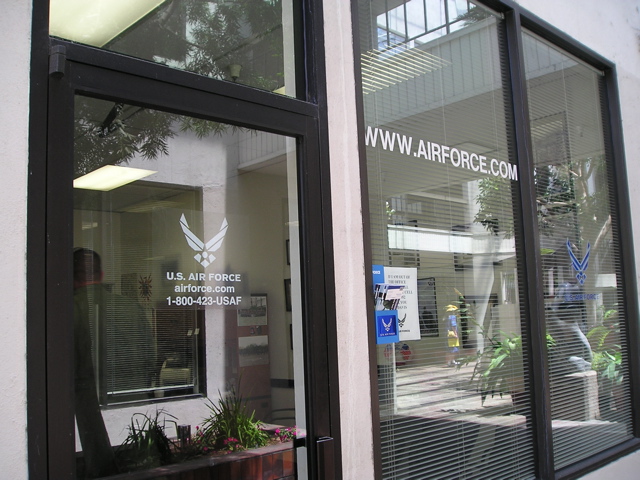 The air force office was also closed for most of the time.
§Up at the Army recruiting office, people tried to get in. Everyone was totally peaceful.
by Miss L. Ainie Ous Tuesday Jun 26th, 2007 7:24 PM 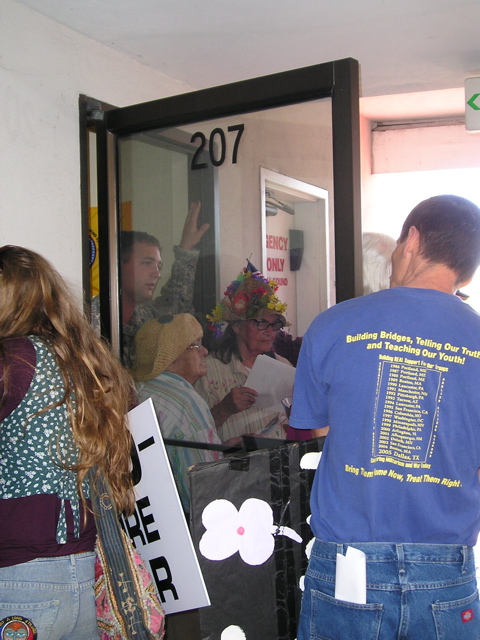 Up at the Army recruiting office, people tried to get in. Everyone was totally peaceful.
§The sole Army staffer wouldn't let anyone in the office.
by Miss L. Ainie Ous Tuesday Jun 26th, 2007 7:24 PM 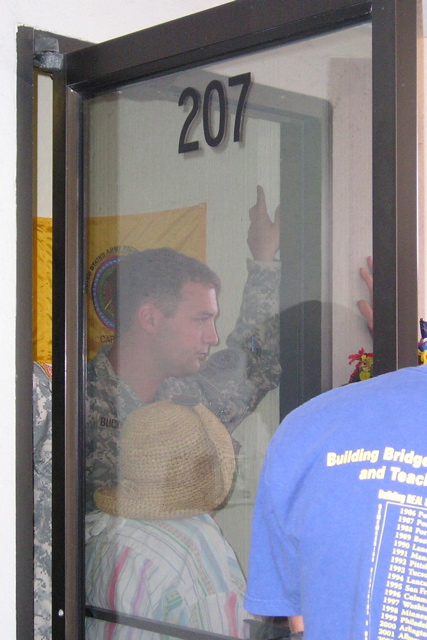 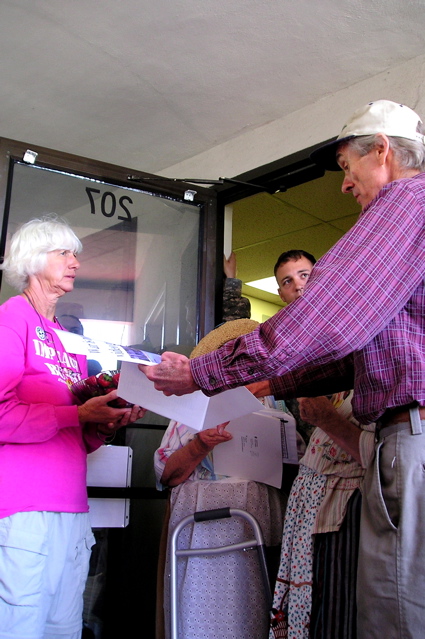 Peace advocates dialogue with the recruiter
§The recruiter called someone for help with the peaceful grannies.
by Miss L. Ainie Ous Tuesday Jun 26th, 2007 7:24 PM 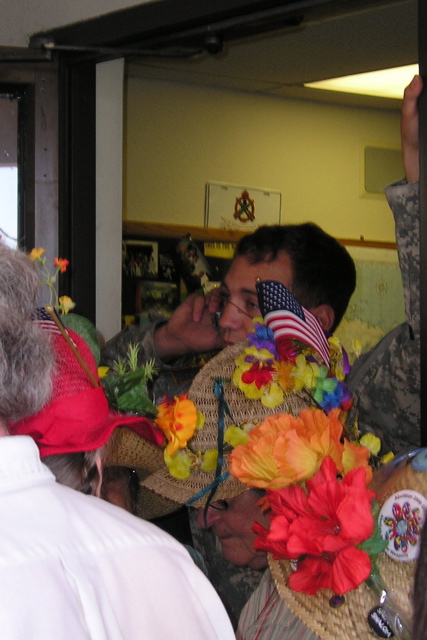 The recruiter called someone for help with the peaceful grannies.
§The Raging Grannies urge him to be a part of the solution.
by Miss L. Ainie Ous Tuesday Jun 26th, 2007 7:24 PM 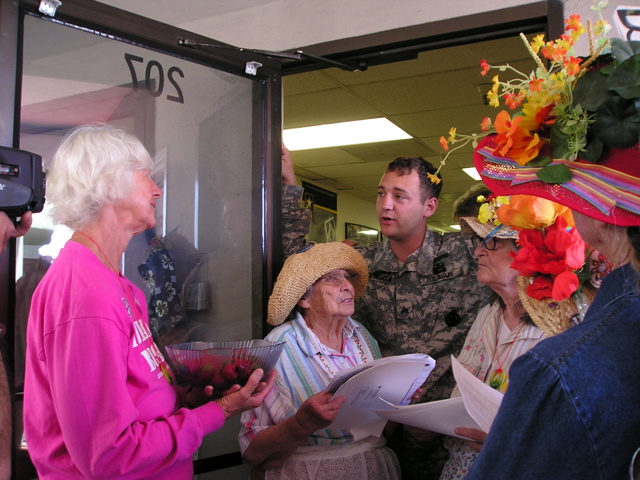 The Raging Grannies urge him to be a part of the solution.
§Capitola police come in and tell people he wants them to leave.
by Miss L. Ainie Ous Tuesday Jun 26th, 2007 7:24 PM 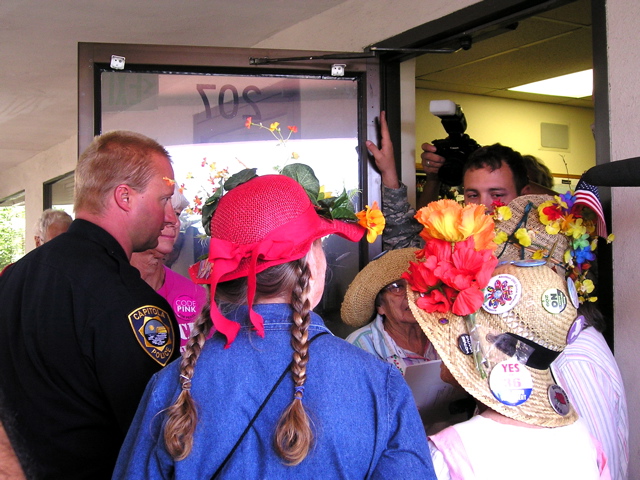 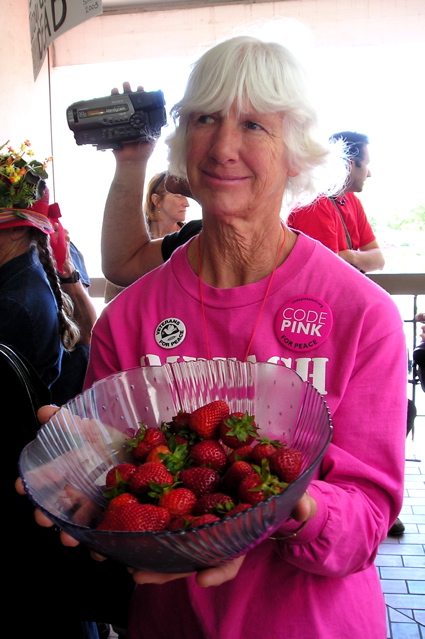 A Peace Offering.
Add Your Comments 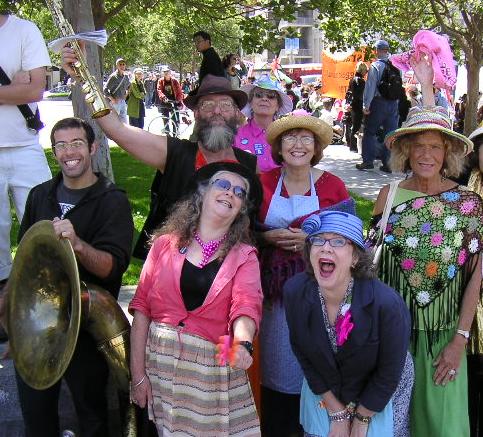 A FUND-RAISER FOR THE FUTURE ACTIONS FUND OF THE ARRESTED GRANNIES and the other members of the Capitola 10 Peace Coalition.

Co-sponsored by the United Nations Association

The Santa Cruz Raging Grannies Song Book will soon be printed. Advance orders at the special price of $10 are now being taken. Send your order and check to
Grannies Song Book, P.O. 865, Santa Cruz 95061
Add a Comment
Support Independent Media
We are 100% volunteer and depend on your participation to sustain our efforts!