by Dan Bacher
The 42 House Democrats that voted to keep the School of the Americas open include two Central Valley Congressmen, Dennis Cardoza and Jim Costa. 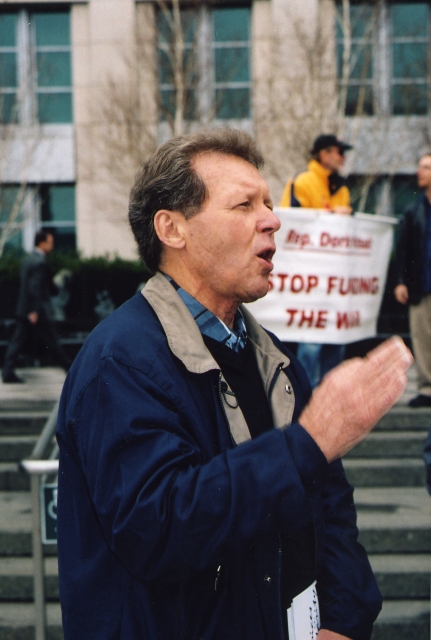 Two San Joaquin Valley Representatives, Dennis Cardoza of Merced and Jim Costa of Fresno, were among 42 Democrats that voted to keep the world's foremost torture school, the School of the Americas, open during a House vote on June 21. The vote was 203 yes, 214 no, 1 voting "present" and 19 not voting.

Cardoza, Costa and 40 other Democrats voted no on the McGovern/Lewis Amendment that would have finally cut off funding to the School of Americas (SOA), now known as Western Hemisphere Institute for Security Cooperation (WHINSEC). Only 6 more votes were needed to pass it - but these Democrats shamefully chose to join Republican Representatives in voting for the school, whose graduates have been responsible for genocide, assassinations, torture and other human rights violations throughout Latin America for decades.

California representatives Loretta Sanchez and Grace Napolitano, along with Charles Rangel of New York, are listed among the Democrats who chose not to vote. (House Speaker Nancy Pelosi is not found on any list, not even present.)

Members of SOA Watch, a human rights advocacy group founded in 1990 by Maryknoll Priest Father Roy Bourgeois to close the “School of Death,” were disappointed by the vote. However, SOA Watch activists vowed to continue their efforts in Congress until the school, located in Fort Benning, Georgia, is shut down.

“The grassroots mobilizing effort was tremendous: Tens of thousands of emails, faxes and calls flooded the halls of Congress over the past three days,” said Joao Da Silva, SOA Watch spokesman, after the vote at 11:52 p.m. on Thursday. “Students, clergy, union members and veterans traveled to DC and visited with hundreds of Congressional offices to communicate clearly that there is no room for institutions like the SOA/WHINSEC in our future. Despite this, 214 Members of Congress missed the chance to stand up for human rights, justice and democracy, and voted to keep the funding for the SOA/WHINSEC flowing.”

The WHINSEC “PR machine” and high-ranking Pentagon officials used taxpayer money to put a lot of pressure on Members of Congress. However, Da Silva said this is no excuse for Representatives to not be accountable to their constituents.

“There were Representatives this week that committed to vote to cut funding for the SOA/WHINSEC, and then shifted their vote,” said Da Silva. “Those people need hear from all of us, loudly and in public.”

Da Silva emphasized, “While we did not get enough Members of Congress to vote with us, it was clear to us and our supporters in the House that we have tremendous power when we mobilize together. We gained the support of new Republicans and new members of Congress. The margin of SOA/ WHINSEC survival is rapidly dwindling, and this week due to grassroots pressure, we added several new cosponsors to HR 1707 bringing our total to 111. We have gained a lot of ground in Congress and our goal of closing this School of the Death is coming closer and closer.”

The vote, although it failed by 6 votes, still came closer to ending the school's funding than last June's vote, when the amendment to the Foreign Operations Appropriations Bill by Jim McGovern (D-MA) calling for school's closure failed by a 15 vote margin.

The recent vote came after a series of successes by SOA Watch over the past two years in convincing Latin America leaders to remove their military and police officers from the school. Venezuela, the first country to withdraw its troops from the SOA in 2005, was followed by Argentina and Uruguay last year. After a visit to Bolivia by Roy Bourgeois, President Evo Morales said Bolivia's military will be pulling out of SOA/WHINSEC on a gradual basis

More recently, Costa Rican President Oscar Arias announced on May 16 that Costa Rica will stop sending its police to train at the school. Arias, a Nobel Peace Prize winner, made the decision after talks with a delegation of SOA Watch, including Bourgeois and Lisa Sullivan Rodriguez.

Costa Rica does not have an army - choosing to spend its tax money on education, health and social welfare - but has sent some 2,600 police officers over the years to be trained at the school.

"We agreed that when the courses end for the three policemen we are not going to send any more," Arias said.

The SOA/WHINSEC has graduated at least 11 military dictators and over 60,000 soldiers, many of which have been linked to some of the worst human rights abuses committed in the Americas.

“The school made headlines in 1996 when the Pentagon released training manuals used at the school that advocated torture, extortion and execution,” said Da Silva. “Despite this admission and hundreds of documented human rights abuses committed by soldiers trained at the school, no independent investigation into the facility has ever taken place.”

SOA Graduates include Hugo Banzer Suarez, the former dictator of Bolivia, and Guatemalan Dictator Efren Rios Montt, who was responsible for a war of genocide against the Mayan people that resulted in the elimination of 626 Mayan villages from the face of the earth. Notorious human rights abusers such General Hector Gramajo of Guatemala, Leopoldo Galtieri of Argentina, and Guillermo Rodriguez of Ecuador were also graduates.

Bourgeois in his talks around the country always emphasizes the role that the school plays in providing the shock troops and enforcers for corporate globalization throughout Latin America.

"The SOA continues to provide the muscle for U.S. foreign policy. It keeps the rich rich and the poor poor,” said Bourgeois at a talk in Sacramento this February.

Protests calling for the closure of the School of the Americas/WHINSEC have taken place every year around the November 16 anniversary of the assassination of six Jesuit priests and two Salvadoran women at the hands of SOA graduates.

Every year, brave activists “trespass” onto army property during the protest at Fort Benning, facing arrest and time in federal prison. Since 1990, 211 SOA Watch human rights defenders have collectively spent over 92 years in prison, while over 50 people have served probation sentences.