Add an Event
Newswire
Calendar
Features
Home
Donate
From the Open-Publishing Calendar
From the Open-Publishing Newswire
Indybay Feature
Publish to Newswire
Add an Event
Related Categories: San Francisco | Fault Lines | Health, Housing & Public Services
Rent is Theft, Housing is a Human Right
by Tommi Avicolli Mecca (info [at] faultlines.org)
Sunday Jun 24th, 2007 1:39 AM
The housing situation in San Francisco is a prime example of the greatest evil of capitalism. Only those who can afford it get to be housed. Everyone else lives on the streets. They get trash talked by neighbors and politicians alike for the sin of being homeless. They are arrested or cited with “quality of life” citations. 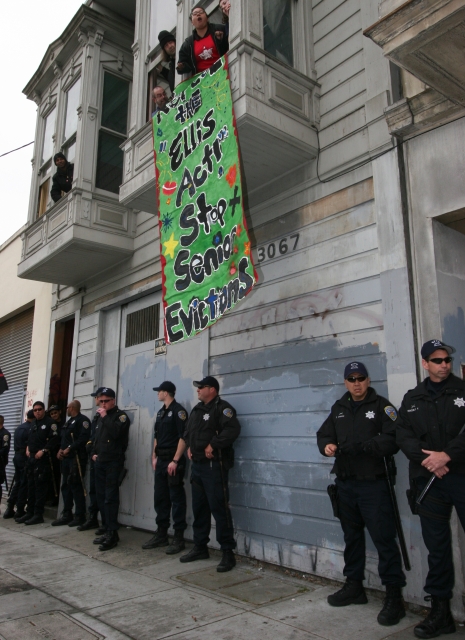 original image (2336x3209)
The situation couldn’t be worse—unless you throw into the mix the fact that landlords in San Francisco have the ultimate weapon against tenants they want to get rid of: The Ellis Act. Even with all of the tenant protections, renters have in a “progressive” enclave such as San Francisco, one can be tossed out into a housing market where rents are astronomical, just because some speculator wants to turn a building into over- priced tenancies-in-common (TICs, pronounced like the bloodsucking critter). Various solutions have been proposed for the housing crisis in San Francisco. Most of these options involve band-aiding a system that is problematic to begin with. Real change will only come by changing how we do housing in America. That means housing can no longer be a commodity. As long as it is, there will be a basic inequity: those who can afford to rent or buy versus those who can’t. Housing is a basic human need and should be guaranteed, just as healthcare is in many countries. In the meantime before we get to that point, however, there are things that affordable housing advocates in San Francisco can fight for. They’re still band-aids on a sick system, but they will give working-class and poor people more of a chance at affording to live here. They include: 1) A moratorium on market-rate housing. The last thing San Francisco needs is more housing for the rich. 2) A moratorium on condo conversions. Every condo that is converted from the rent-controlled stock is the loss of a unit that’s price is controlled while the tenant lives there—not to mention displaces a person paying low rent. 3) Vacancy control, which puts price restrictions on a unit after the tenant moves out. Under vacancy control, a landlord can only jack up the rent a small percentage for the next tenant. Right now, it’s prohibited by state law (Costa-Hawkins). 4) Community land trusts. The land is purchased by a nonprofit entity and taken off the market forever. The tenants who live there either rent or purchase at 30 percent of their income. It is similar to a co-op, only there is no equity in a land trust. 5) Squatter’s rights. If a building is vacant, why can’t people make use of it? A radical, southern Italian, working-class queer, Tommi Avicolli Mecca works by day for the Housing Rights Committee of SF, a tenant’s rights organization.
http://indybay.org/faultlines
Add Your Comments
LATEST COMMENTS ABOUT THIS ARTICLE
Listed below are the latest comments about this post.
These comments are submitted anonymously by website visitors.