Add an Event
Newswire
Calendar
Features
Home
Donate
From the Open-Publishing Calendar
From the Open-Publishing Newswire
Indybay Feature
Publish to Newswire
Add an Event
Related Categories: Fault Lines
Sacco and Vanzetti: A Review
by Hannah E. Dobbz (info [at] faultlines.org)
Saturday Jun 23rd, 2007 8:29 PM
The story of Niccolo Sacco and Bartolomeo Vanzetti was one so powerful that it is still lamented almost 90 years later. In 1920, the two Italian-American anarchists were convicted of murder outside of Boston and held for seven years before their execution in 1927. To the authorities’ chagrin, the execution resounded as an electric shock heard ‘round the world, as the two had garnered support from the far-reaching corners of the planet. Everyone knew the names Sacco and Vanzetti, and nearly everyone resented their deaths. 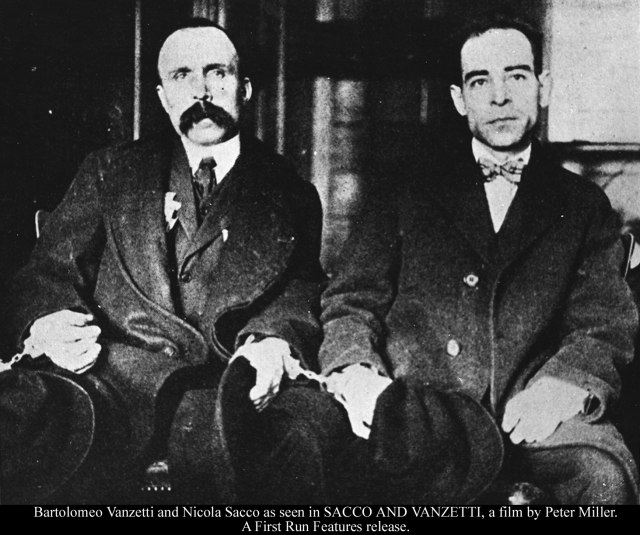 original image (1463x1224)
In 2006, Peter Miller directed a documentary about the plight of Sacco and Vanzetti. Laid upon the backdrop of black and white footage from 1927, Miller skillfully combines interviews with historians, including Howard Zinn and Studs Terkel, and icons like Arlo Guthrie (whose father wrote songs about the duo), in addition to folks who were then only children but still remember the Sacco and Vanzetti support rallies. It is a true challenge to recreate the feelings of anger and injustice that ac- companied the trial and death of these anarchists profiled for their ethnicity and political beliefs. But Miller achieves this through his masterful storytelling in addition to the connection that we all feel to this kind of repression, whether the enemy is profiled as anarchists or communists, Italians or Arabs. In this sense, the film is not only about Sacco and Vanzetti. It resonates as a universal illustration of prejudice, fear, hype, and hatred. Our Sacco and Vanzetti of today could easily have slightly darker skin and headscarves instead of bowler hats. But the potential for scapegoating is still there, and that’s what makes Sacco and Vanzetti such an important film. Today’s generation growing up in a time of endless war must know that there were folks who fought before them and that the struggle still continues.