Add an Event
Newswire
Calendar
Features
Home
Donate
From the Open-Publishing Calendar
From the Open-Publishing Newswire
Indybay Feature
Publish to Newswire
Add an Event
Related Categories: International | Environment & Forest Defense | Fault Lines | Global Justice & Anti-Capitalism
No Love for Golddiggers
by Sakura Saunders (info [at] faultlines.org)
Saturday Jun 23rd, 2007 3:55 PM
From the uselessness of the final product to the dramatic environmental and social impacts of its excavation, modern-day gold mining serves as an absurd illustration of the dangers and complexity of our global economy. 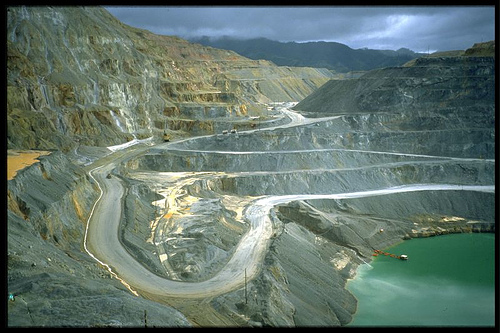 Hovering at around $630 an ounce, the price of gold is based both on its demand from the world market (80 percent of which is used for jewelry) and its supply. The supply is both naturally and artificially limited; naturally limited by the 79 tons of waste that is extracted for every ounce of gold, and artificially limited by the amount of gold that is kept in storage vaults by investors and nations who back their economies by holding gold reserves. It is estimated that enough gold is stored in these reserves to meet the current gold demand for 20 years. The only thing more astonishing than the 79 ton per ounce ratio is the fact that this waste is largely toxic. A portion of this waste is drenched with cyanide to extract the microscopic flecks of gold from the ore. The toxic waste, or tailings, then sits in tailing ponds to await its reuse. There have been over 30 recorded spills of this toxic substance (in either its transport or storage) in the last five years, resulting in massive fish kills and drinking water contamination. In some countries, they dump this cyanide-laced waste directly into the rivers and oceans. And the untreated ground up ore? Well, this is likely toxic as well. Wherever you find gold, you also typically find sulfides, such as pyrite (also known as fool’s gold), and heavy metals. These ground up sulfides need only to mix with air and water to create sulfuric acid, which creates acid mine drainage. Not only is this acid water destructive to local plant life and water systems, but this acid also leaches out heavy metals – such as mercury, cadmium, and arsenic, which in turn pollute the air and the water. It has been estimated that metals mining accounts for 96 percent of the world’s arsenic emissions. Mining companies often claim that only a few environmentalists oppose mining operations at the expense of the economic development of the communities they purport to represent. Meanwhile, the companies themselves promise to bring jobs, build schools and hospitals, and encourage investment that will ultimately outweigh the damage to the environment. The reality of mining, however, conflicts with this false dichotomy. Mining often relies heavily on government subsidies for water and energy, the royalties that mining companies pay are often significantly less than other industries, and the average life of a gold mine is a mere 14 years. Additionally, countries rich in gold reserves suffer from the “resource curse” that ails most other extraction industries. The “resource curse” is a term coined to describe how resource rich countries have statistically lower economic growth rates than resource deprived ones. It turns out that countries with great material wealth also have a high propensity for high level government corruption (hence the “investment incentives” and light taxation). These large scale operations often negotiate the displacement of peoples and destruction of livelihoods directly with the national governments, despite resistance from local governments, such as is the case in the Philippines, Peru, Indonesia, and Tanzania. Hence, you get situations like in Peru, where a provincial mayor was pegged with rubber bullets at an antimining demonstration, or in Indonesia and Papua New Guinea where mine security has played a role in suppressing independence movements. In Tanzania, Village Chairmen served 30 month prison sentences for allegedly “inciting villagers to reoccupy their farmlands and mine pits,” after a Canadian corporation took over an area that was at the time being mined and farmed by some 30,000 to 250,000 people. The infringement of local autonomy is most pronounced when looking at the numbers. According to estimates by Oxfam, 50 percent of newly mined gold will be from native lands. For many indigenous people, who often rely on their environment for food and necessities, mining threatens not only their livelihood, but also their traditional way of life. Their lands tend to be vulnerable to encroachment because of their lack of power within their country’s political system; their land and water rights are often ignored while their resources are exploited and their environments destroyed. This global exploitation is backed by both private security and military might. Many of the same mercenaries who are now finding work in Iraq got their start guarding mines and oil fields. These private militaries operate with impunity in dealing with local conflicts that often end in injuries and even deaths. In some countries, mining corporations will make direct payment to the police or the country’s military to guard their gold mine, leading to conflicts of interest when those same police repress protestors at anti-mining demonstrations, as has happened in the Ancash region of Peru. In spite of the threat of repression, people are wising up to the toxic legacy of gold mining and these global operations are increasingly met with resis- tance. All throughout Latin America, communities with experience in mining are traveling to those considering it, sharing their stories of environmental devastation, economic depression, and struggle so that others can avoid a similar path. Meanwhile, more attention is being focused from within the countries of the mining corporations, such as Canada, the US, the UK and South Africa, to bring attention to the human rights abuses for which they are responsible. Through the strength of the local organizing, coupled with the support of international solidarity campaigns, some communities have succeeded in chasing away the threat of open-pit mining. However, many more communities continue to feel the pressure of global capital encroaching on their lands, alongside the promises of economic development, the rhetoric of “environmental stewardship,” and, that failing, force and intimidation.

Sakura Saunders is the North American editor of www.protestbarrick.net.

From Fault Lines #21
http://indybay.org/faultlines
§missing context: the photo captions
by sakura Friday Jul 13th, 2007 11:24 AM
to add some much need color to this article, I also provided a couple of picures with some captions, describing the situations that I highlight with greater detail.

here they are, for those without the print addition of FL:

Less than one third of Indonesia's military budget comes from the national government. The rest of the money is raised independently from the military itself, through means such as prostitution, human trafficking, and of course... providing security for the extraction industry. It is estimated that in 2002 alone, New Orleans-based Freeport McMoran paid $5 million directly to the Indonesian military for securing their West Papuan mine, where they have been operating since 1967. Since before that time, there has been an indigenous struggle or independence for Indonesia, and Amnesty has estimated that 100,000 Papuans have died as a result of government-sponsored violence against West Papuans.

When Barrick Gold SUVs began to ply the dusty roads of La Rioja, a group of four women met in the town of Famatina in March 2006 and formed the "Self-Organized (Autoconvocados) Neighbors of Famatina for Life." Soon a series of smaller, inclusive groups sprang up in towns and villages around Mt. Famatina to educate their neighbors on the dangers of gold mining – gathering enough political clout that the local government introduced an anti-open pit mining referendum and brought the pro-mining governor to trial for corruption. Mistrustful of the political process to save the community from the threat of mining, the autoconvocados decided to blockade the mining road at Peñas Negras, some 9,300 feet up Famatina, forcing Barrick to suspend activities on March 14, 2007.

During the regional 48 hour strike in April 2007, thousands of demonstrators marched throughout the Ancash region. These strikes have been held for annually for years, and are usually met with (at times fatal) police repression, despite support from the local Ancash government. Here, mining companies are allowed to employ police to provide security for mines, creating an uncomfortable conflict of interest when police clash with protestors.
Add Your Comments
LATEST COMMENTS ABOUT THIS ARTICLE
Listed below are the latest comments about this post.
These comments are submitted anonymously by website visitors.