Up a dusty flight of stairs in the heart of Boston’s Chinatown lies the arterial lining of the Boston anti-biotech movement. Banners for the US Social Forum line the walls, stacks of the Bioustice 2007 underground newspaper sit prepared for distribution, and various flyers await eager hands. Amidst these tools of resistance, there is a murmur of activity as a motley crew of committed individuals plot and laugh heartily. These are not your typical anti-authoritarians. 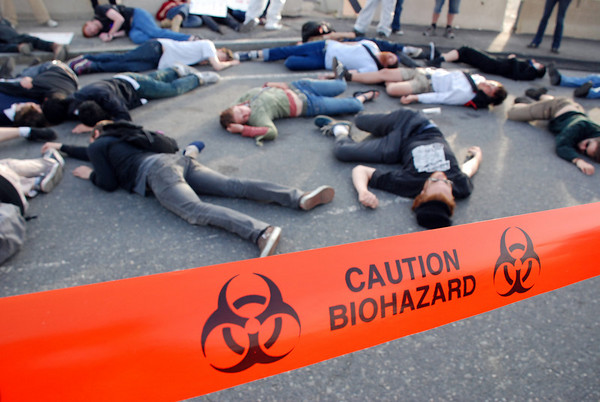 Although over the course of the next six days they will be met by armed oppressors, today the afternoon sun shines through the 5th floor windows into a space ripe with expectation. This is the BioJustice Convergence Center. BioJustice 2007 is a direct challenge to the annual B.I.O. (Biotechnology Industry Organization) International Convention. BioJustice participants celebrate sustainable food and healthcare alternatives, and resist the tools of corporate domination: geneti- cally engineered foods, drug monopolies, and biological weapons. Downtown - 5.04.07 Across town at the Boston Conven- tion and Exhibition Center, corporate sci- entists conspire to engineer Genetically Modified Organisms (GMOs), produce medical drugs using means other than di- rect extraction from native biological sources (biopharmaceuticals), and build ‘biodefense’ weapons, pushing what Brian Tokar of the Institute for Social Ecology calls a “corpo- rate agenda of control over our food and health.” This is not a new development. Since the 1980s, food and drug corpora- tions have experimented with genetic engi- neering, the process of transferring genetic material between living organisms. In 1982, Genentech developed recombinant human insulin (rHI), the first biopharm product. In 1987, the first Genetically Modified (GM) crop of 2000 testers was planted outdoors in Brentwood, California and subsequently destroyed the next night by Earth First!ers. In 1990, the first transgenic pig produced human milk proteins via implanted DNA. Corporate domination abounds in the world of biotechnology. Further, the profit-driven attempt to use biological agents as weapons is key to the BioJustice movement. Central to the cur- rent struggle in Boston is the fight against the “Biosafety Level 4” laboratory being constructed in the South End by Boston University. Twenty-five thousand people live within one mile of this highly volatile lo- cation, where research would be conducted on the most deadly pathogens in the world. Carmen Nazario of SafetyNet, a Roxbury neighborhood action group, understands that the powers that be want to study these pathogens in case of emergency. Today at the BioJustice Press Conference she objects, clearly stating “a case of emergency will be that they are causing one.” Blackstone Park - 5.06.07 Upon arriving at Blackstone Park, located in Boston’s South End, I find a core group of activists gathered around and inside the park’s fountain, dramatically reworking the “myths” of corporate biotechnological dominance through puppetry and theater. Food Not Bombs is serving food and coffee, a DJ emits blasts of funk and soul, and the ever present Boston Police force circles nearby. Though internet chatter will later criticize the BioJustice event as a “bio-bust,” I find a wonderful harmony present in the park. The relatively small gathering of neighbors and community members is peaceful, positive, and inclusive. As a young white male, I find that a humble and respectful approach is best suited to productivity. Instead of attempting to take over a neighborhood and temporarily reclaim the streets, these activists networked with the local community and the international BioJustice struggle, and recognized the importance of permanently restoring community power. The Common - 5.08.07 Boston Common is just that: a com- mon space for community to come together. Originally owned by William Blaxton (often pronounced “Blackstone,” as in Blackstone Park), the Common was sold to the city and over the years has evolved from a lynching ground to battlefield to concert space to platform for such notables as Martin Luther King, Jr. and Pope John Paul II. Today, the Common is transformed from a static space to a neoliberal market in reverse, an antidote to the mediocre and insincere. By offering mutual exchange and providing an outlet of sorts for self-sufficiency, the Really Really Free Market acts as a medium of creativity and a substitute for the mundane. On the surface, sun shining and cool breeze greeting us as we exit the Park subway stop, the Common appears to be any ordi- nary city park. Young people gather and play games, small groups chatter idly, and couples stroll complacent along concrete paths. Yet there is an atmosphere of expectation, of something waiting to happen. As the cops patrol atop supersized horses and V8 engines, we read poetry aloud under a shade tree, collapse, and gather our- selves again. The Market really was free here, and the community was one. It was only later that we learned that innocent people had been detained for exit- ing the park in a group. So what happened? Why was the RRFM such a small, isolated event? The Market happened later than we expected, on a different day, so only those who were “in” on the currents were able to be there. Those from out of town or who were not part of the organizing collective would be ill-informed as to specifics, and only those who took the time and energy to see what this group of free-marketeers was all about would be able to experience just how com- munity-based, self-sufficient exchange really works. In my experience, I found that only those who unsettled their comfort zone, asked questions, and acknowledged one an- other as fellow human beings were able to fully participate in this idea so radical that its physical presence had to be violated by agents of the state. 5.09.07 As an “outsider” to the Boston anti-bio- tech movement, I was surprised and relieved to find a strong die-hard presence of com- mitted folks. Although from the margins Boston seemed to be inundated with cops and appeared to have little to no strong mass movement, there were a number of instances in which I found comrades in arms in the struggle against corporate biotechnological dominance.

§Bio-Hazard Bollocks
by UFF193821HC
Thursday Jan 24th, 2008 5:30 AM
I would like to make a statement about this article.
Owing to a lack of information on the part of the author, it is the view of this unit of humanity that the truth needs to be told.

I belive that it is not the job of the individual to rise against the state, and to say what the state can and cannot do.
I have found that GM foodstuffs and products of same are not what could be considered dangerous.
They are not inimicable to human health, nor are they in any way toxic to the surrounding environs.
They are what is known as a support unit.
GM foodstuffs will supplement, not out-do organic food substances.
GM foodstuffs will be grown in poorer countries of the world, where conventional foodstuffs cannot be grown, assisting locals in the rise out of poverty

is it your place, individual, to tell them they can't because of your naiivety and superstition

Yours Truly
Trinity One
Add a Comment
Support Independent Media
We are 100% volunteer and depend on your participation to sustain our efforts!