Will Fresno’s Homeless People be put into a Concentration Camp?

by Mike Rhodes (mikerhodes [at] comcast.net)
Fresno’s homeless sound the alarm that the city wants to round them up and force them into a concentration camp. Photo below is Al Williams, a homeless man, speaking before the Fresno City Council meeting on June 19. 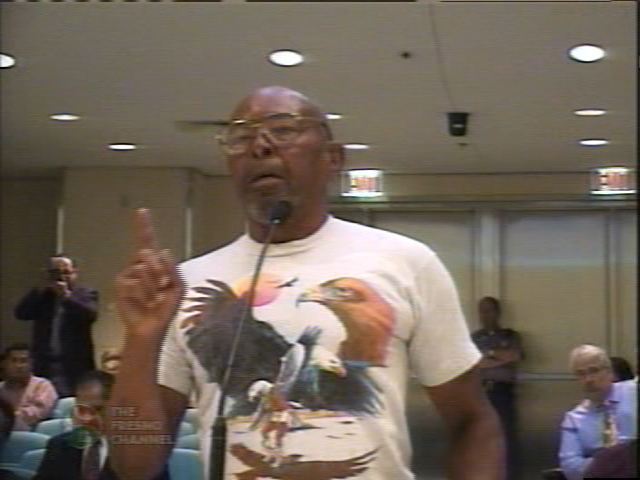 Will Fresno’s Homeless People be put into a Concentration Camp?
Is this the final solution?
By Mike Rhodes

Williams is not the only homeless person concerned about the specter of being put into a concentration camp. Cynthia Greene, who lives in a homeless encampment on G and California street, told me that she would not be forced “into that concentration camp. They don’t have any shade, it is all fenced in, and full of goat head thorns.” Williams and Greene spoke up for their rights as the City Council debated a new city ordinance that would ban camping (without a permit) in the City of Fresno. The ordinance is targeting the thousands of homeless people (the latest estimate is that there are over 8,000 homeless people) in this community. If passed, this ordinance would add to other “quality of life” ordinances directed at the homeless. Those ordinances include one passed last year that makes it a crime to push a shopping cart and an earlier ordinance that makes it illegal to panhandle.

Becky Johnson, a homeless advocate in Santa Cruz, Ca says that local government has passed anti-camping ordinances there and that it has been a dismal failure. Johnson writes, “common sense tells us that if a man doesn't have $40 for a motel room, then he can't afford a $90 Camping citation either. Here in Santa Cruz our city writes nearly 6,000 camping citations a year and we STILL have a large homeless population. Surprise! Surprise! Surprise!”

Johnson continues “you can't solve homelessness thru fiat. Homelessness is the logical consequence of current economic and political policies over which the individual has little control. When a homeless person gets a citation for the "crime" of living out of doors because he can't afford to live indoors, this compounds his set of problems. He now is treated as a criminal by law enforcement, is deeper in debt, and in the best case scenario ( he serves his sentence/pays his fine) he now has a criminal record which is a further obstacle to obtaining housing and employment. In as many cases as not, these citations go to warrant, and the person ends up spending time in our county jail which is costly and completely non-productive.”

According to Johnson “the 9th Circuit Court ruled in 2006 that citing people for sleeping or sheltering themselves at night in a situation in which insufficient shelter exists, constitutes ‘cruel and inhuman punishment’ and is forbidden constitutionally. Those cited under Fresno's new law might turn right around and sue the City for damages.”

The stated goal of the task force is the establishment of a plot of land where the homeless can camp. This is a part of Fresno mayor Alan Autry’s initiative to set up a “free zone” where homeless people can go. See: http://www.indybay.org/newsitems/2007/04/17/18400746.php . The mayor’s pledged to establish an encampment where homeless people could go and be safe. This camp would have portable toilets, trash bins, running water, and a trailer from the County of Fresno that will provide social services.

Instead, what the homeless have received are more evictions (see: http://www.indybay.org/newsitems/2007/06/12/18427051.php ), harassment, and ordinances criminalizing poverty. The 60 day (self imposed) deadline in which the mayor promised to set up this free zone has come and gone. With property owners in the area of the proposed encampment up in arms (see http://www.indybay.org/newsitems/2007/06/13/18427207.php ) about the location and the homeless themselves ambivalent if not down right hostile to the proposal, the mayor’s plan and the Homeless Task Force seem destined for failure.

Big Sue, a homeless woman in downtown Fresno, told me that she thought the city is trying to push them as far south of Ventura Avenue as they can. This assessment was confirmed by city council member Jerry Duncan’s call-in to local right wing talk show host Inga Barka’s radio show last month. Duncan told Barka that the goal was to move the homeless people so they are not so visible in the downtown area and that once they establish this camp it will give them (the city) the ability to clean up illegal encampments elsewhere.

At the June 19 City Council meeting Duncan went one step further. He wondered out loud about whether the camping ordinance went far enough. He complained about people who give the homeless food and clothing. Duncan appeared to be seriously considering an ordinance that would ban people from feeding and clothing the homeless.

Can the City of Fresno successfully manage homeless people by forcing them onto a small plot of land in the industrial section of the city and passing increasingly repressive ordinances against them? Cynthia Greene speaking before the City Council said “if this ordinance is passed it will be challenged. It was challenged in Los Angeles and they had to back down because it is not good for the people.” The homeless in Fresno will use whatever tools they have at their disposal to stop this cruel and inhumane treatment, stop the unconstitutional criminalization of poverty, and fight against their confinement in the proposed concentration camp. 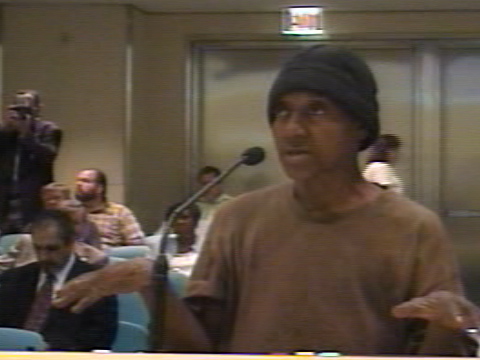 Cynthia Green said “homelessness is created by the government, not by the people. It is created by corporations, business both large and small.” As hard as life is on the street, Cynthia said she would not go to what she describes as a “concentration camp” being set up by the City of Fresno.
Add Your Comments
Latest Comments
Listed below are the latest comments about this post.
These comments are submitted anonymously by website visitors.
TITLE
AUTHOR
DATE
Nazi Germany in Conservative California
GOPrNazis
Shocked
Elaine Trovato
Whats next?
Melissa
Hyperhungry Attorneys At Work! Fresno City Council to Ignore Federal "Jones" Case
Robert Norse
FEMA detention camps, displaced people
trapped & harrassed in DHS police state
Support Independent Media
We are 100% volunteer and depend on your participation to sustain our efforts!