by Mike Rhodes (mikerhodes [at] comcast.net)
Fresno mayor breaks promise - the homeless suffer. The photo below is the land the city of Fresno might purchase to set up a “free zone” for the homeless. Neighboring business owners expressed their outrage at the idea at yesterday’s Fresno City Council meeting. 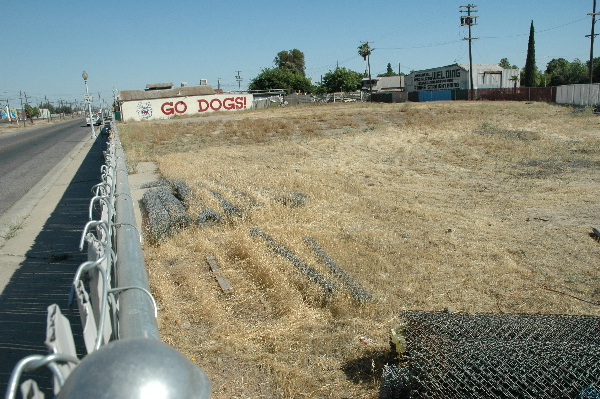 At a Press Conference held on Tuesday, April 17 Fresno mayor Alan Autry made a commitment to this community that he would have a city facility set up for the homeless within 45-60 days. He challenged the local media to hold him accountable to this time line. This Saturday, June 16 is when the 60 day deadline is up. Autry promised a facility where homeless people could go, where they would be safe, and he said there would be portable toilets, trash bins, and a social service trailer (with staff) provided by the county. For a video of mayor Autry making this commitment, see: http://www.indybay.org/newsitems/2007/04/17/18400746.php

Instead of providing a space where homeless people can stay, there have been more evictions of homeless people in the downtown area. Yesterday, Caltrans and the California Highway Patrol evicted about 50 homeless people from an encampment on California Avenue. See: http://www.indybay.org/newsitems/2007/06/12/18427051.php . A couple of weeks before that a group of homeless people were evicted from the area south of Ventura near the Santa Fe railroad tracks.

What the City of Fresno has done is put up some portable toilets and a trash bin at the homeless encampment, which is located on H street south of Ventura. The city does not want homeless people living there and representatives of the police and city government have said they will eventually be forced to move. This is not the encampment the mayor promised to set up.

What the city has also done is announce their interest in purchasing land at Railroad and Cherry Avenue. The intended use for this land is to set up the homeless encampment the mayor promised. The plan to use this land for a homeless encampment is months from development and has critics on all sides. Yesterday at the Fresno City Council meeting several business owners in the area appealed to the city not to locate the homeless encampment in their backyard. It was a classic Not In My Back Yard (NIMBY) argument, but the business owners are organized and angry about the plan. The homeless that I have talked to about the proposed site of the encampment did not sound excited about it either. The complaints are that the land has no shade and is nothing more than a patch of goat head thorns.

There is a need for a safe place for homeless people to go in Fresno, so they can set up a tent or sleep out under the stars. The facility needs to have water, toilets, and trash pick up. In a city the size of Fresno, there probably needs to be several safe homeless encampments.

At the April 17 Press Conference Autry said it was not his goal to set up this new encampment to maintain the status quo. The goal is to treat the homeless with dignity and respect and help them find whatever services they need (job training, school, drug/alcohol rehabilitation, mental health services, etc) to give them hope for the future.

For now, the homeless in Fresno are forced to live on broken promises as they are pushed from one bare patch of land to another. Will the media hold mayor Autry accountable to his self imposed deadline? That remains to be seen.

For a list of articles and documents about the struggle for civil liberties for homeless people in Fresno, see: http://www.fresnoalliance.com/home/homelessness.htm
END_OF_DOCUMENT_TOKEN_TO_BE_REPLACED
Add Your Comments
Comments (Hide Comments)
§That looks horrible...
by irlandeso
This place does not look like such a great place to be in the summer months in the Valley. I am surprised that Autry and comp. are not being more sensitive to the need for shade at any sort of possible site for a homeless encampment. How ignorant can you be?
Add a Comment
§Gloria h
by Gloria H
seems to me with the weather over 105 that maybe the mayor can open up cooling centers like the big air condition lobby at city hall for the people to stay out of the heat
Add a Comment
Support Independent Media
We are 100% volunteer and depend on your participation to sustain our efforts!