The Hammer Comes Down

by Mike Rhodes (mikerhodes [at] comcast.net)
Homeless people in Fresno are evicted from Caltrans land. The mayor reneges on a promise to provide homeless people with a safe place to sleep. City council members don’t want to rock the boat. 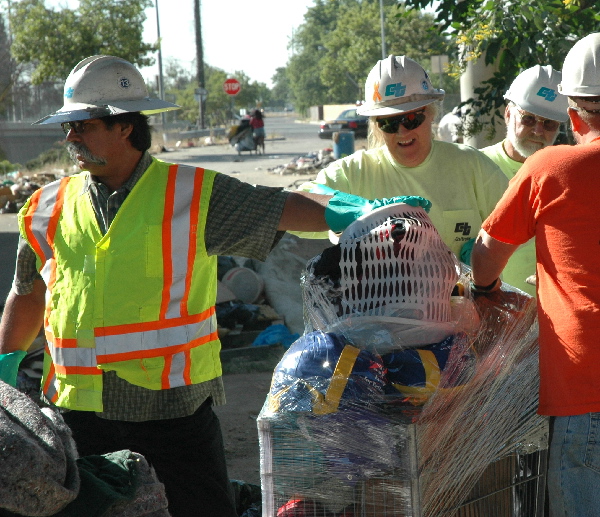 The Hammer Comes Down
Fresno Homeless Have Nowhere (safe) to go

The California Highway Patrol (CHP) and Caltrans evicted homeless residents from an encampment in downtown Fresno today. As many as 50 homeless people were told to “move on” last week (See: http://www.indybay.org/newsitems/2007/06/04/18424762.php ). After several false deadlines for the eviction to begin, the CHP and Caltrans did move in today clearing the land of all homeless people and their property.

Most homeless people had moved by the time the “cleaning crew” arrived. Cynthia Greene, a resident of the homeless encampment, said most of the people had left and whatever remained was junk. She did acknowledge, however, that some homeless residents had been away since before the eviction notice was posted. Their tents still remained on the land, which sits under an unused overpass.

The day began with the CHP taking pictures of everything and everyone in the area. They took photos of homeless people, the property that remained on the property, and journalists. Next, a crew of Caltrans workers moved in and started to dismantle the remaining tents and other structures in the area. They separated what they considered to be garbage and things of value. The trash was put into a garbage truck and the items of value placed on a truck. From there, it would be taken to storage for 90 days. It was unclear, at times, how some things were determined to be trash and other items put into storage. Jose Camarena, a spokesperson for Caltrans, explained that they have talked with the residents of this encampment about what to save and what could be thrown out. “We have had a lot of conversations with the people out here. We let them know that we are not going to come through here and shove you out. We want to make sure that we interact with you and you tell us what you want to keep and what you don’t want to keep. That allows us to protect their items as much as we can.”

The former residents of this encampment have moved to other homeless encampments in the downtown area. The City of Fresno has recently installed portable toilets and a trash bin at one of these encampments (see: http://www.indybay.org/newsitems/2007/05/17/18417798.php ). That encampment has grown in recent days and now includes about 100 residents. The Hill, which is about 100 yards east of the encampment that was removed today, has about another 100 residents. A photo of some of The Hill’s tents is below.

On April 17, 2007, Fresno mayor Alan Autry announced a new initiative of the city that would provide land to the homeless where they could stay, and not be camping “illegally.” The mayor promised this land would be available in 60 days and told the media to hold him to that time line. 60 days will be up on Saturday, June 16. According to several sources at City Hall, the mayor’s pledge to establish this “free zone” will not take place any time soon, certainly not by this Saturday.

The City of Fresno is in the process of purchasing some land, not far from today’s eviction, that would serve as the site for the mayor’s plan. Autry said the site would include dumpsters, portable toilets, and a trailer where Fresno County would provide social service information. The mayor and City Council members say this is not a solution to homelessness, but it is a step in the right direction in dealing with the hundreds of homeless people in the downtown area. Until more permanent solutions to homelessness are initiated, at least homeless people will have a place to go to the bathroom and be free from the constant sweeps that move them from one place to another.

Nobody that I contacted on the City Council today seemed frustrated with the delay in the mayor’s plan. Council member Jerry Duncan said “nothing surprises me here anymore but at least it is still moving forward. There needs to be a Conditional Use Permit issued to the City for the use of the property for this purpose so there will be a hearing and vote at the Planning Commission in the near future.” Duncan said it will be important for interested community members to come out and support the plan, since there are several business owners in the area that are less than excited about a large homeless encampment in their neighborhood. Greg Barfield, council member Cynthia Sterling’s aide did not want to comment. He simply wrote an email saying “the key is getting the services and location.”

I asked Jose Camarena, the Caltrans spokesperson, if they had plans to evict the homeless people living on The Hill. Camarena said they had no plans to evict them and that Caltrans was in the process of transferring title of the land to the City of Fresno. When asked why Caltrans was evicting these homeless people five days before Autry’s plan was supposed to be in operation, Camarena said “this clean up was coordinated and scheduled independently of any schedule that the City of Fresno has set forth. This is a part of our routine clean ups. We have clean ups like this all over the state and all over our district.”

At the end of the day Caltrans had a clean strip of land but Fresno’s estimated 8,000+ homeless people still did not have a safe place to sleep. 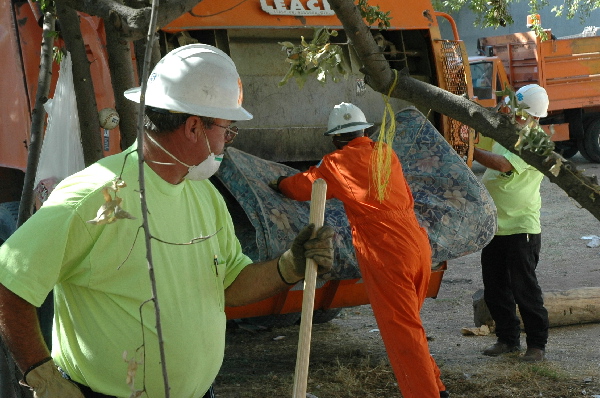 Caltrans workers evicted homeless residents from an encampment in downtown Fresno today. Here they are seen throwing a mattress into a garbage truck.
§CHP Officer Takes Photo
by Mike Rhodes 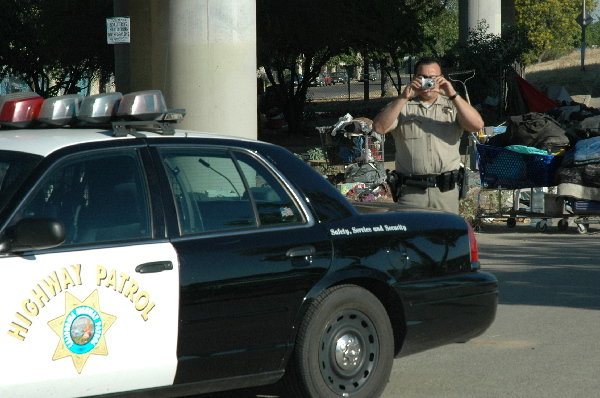 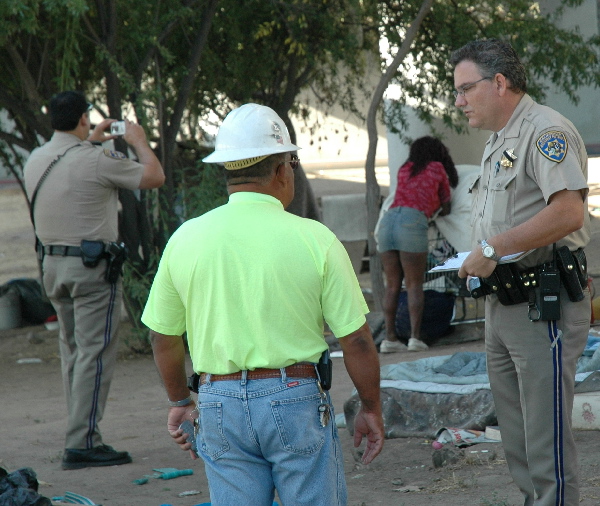 The CHP took a lot of photos today. Here they are seen photographing a homeless woman who was in the process of moving her property 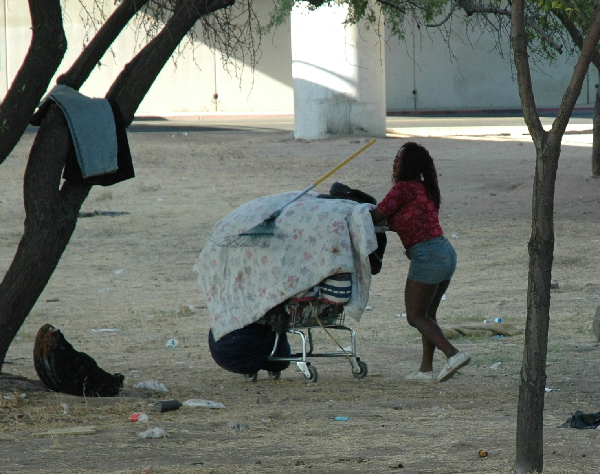 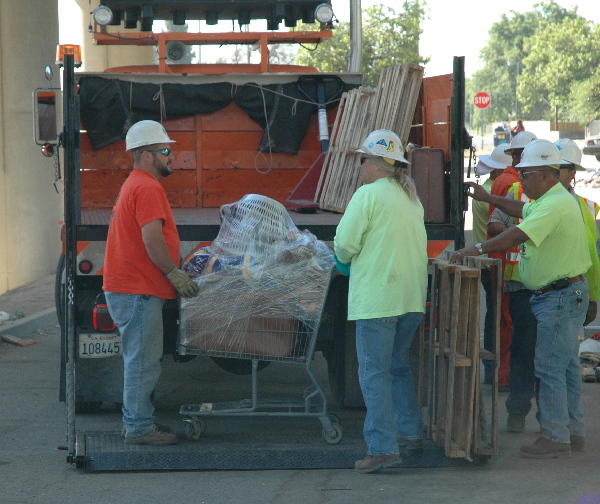 The CHP first photographed homeless peoples property, Caltrans workers then moved in and put it in bags or wrapped in plastic. They are seen here putting a shopping cart, full of property, on a truck. Later it was taken to a storage facility where it will be saved for 90 days. 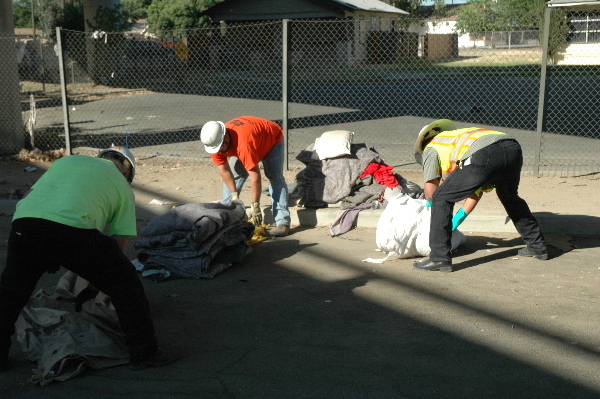 Caltrans workers first folded these blankets, then put them on a pallet.
§Trash Bags full of Property
by Mike Rhodes 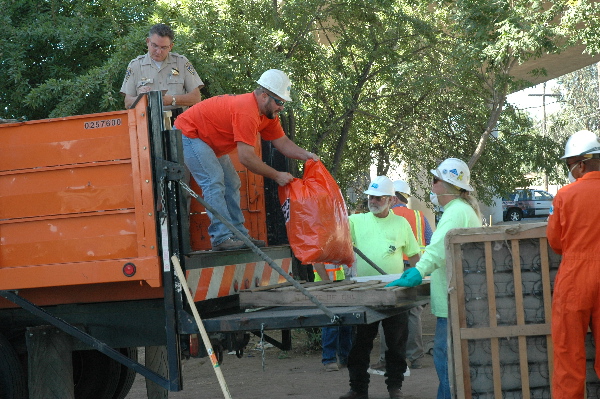 Smaller items like clothing were put in trash bags and taken to storage.
§Cynthia Greene
by Mike Rhodes 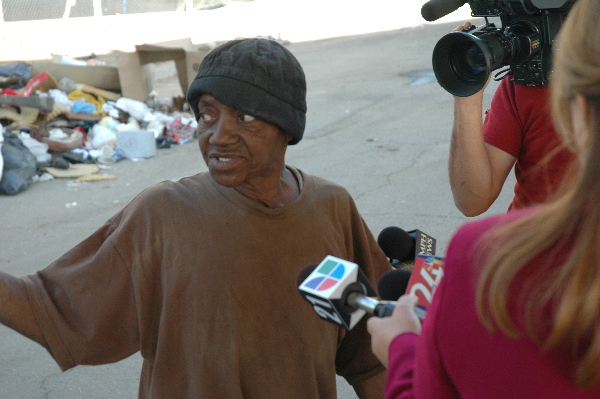 Homeless resident of the encampment Cynthia Greene tells the media about her views of the eviction.
§This Box Springs will be Stored
by Mike Rhodes 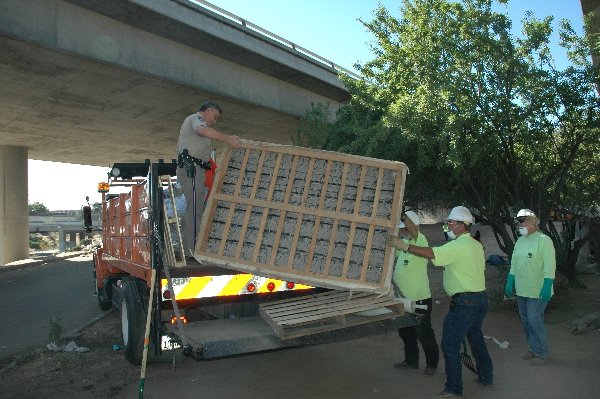 The mattress (photo above) was destroyed. How did Caltrans decide what was stored and what was saved? Caltrans spokesperson Jose Camarena told me that they asked the homeless residents, like Cynthia (a photo of her is also above) what was trash and what was not. 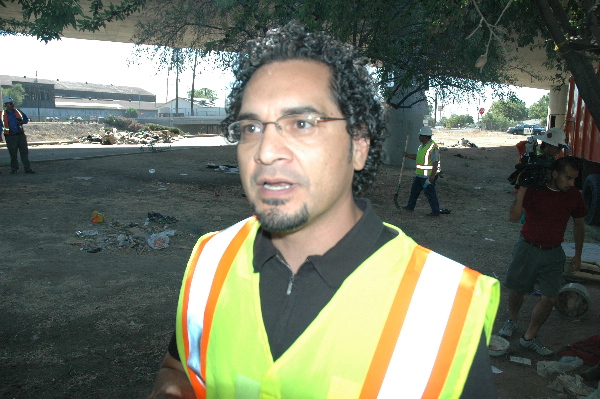 Jose Camerena is a spokesperson for Caltrans. He was on the scene to answer media questions. 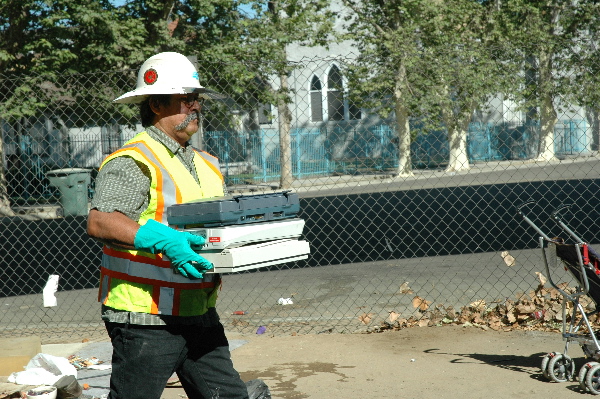 All kinds of things were stored, including these computer document scanners.
§Posting Notice
by Mike Rhodes 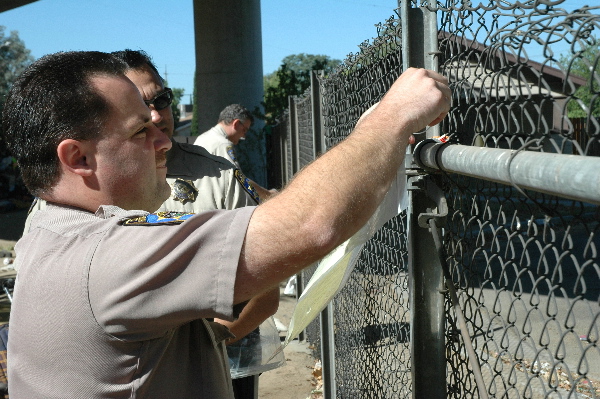 These officers are posting a notice about where property that was taken in today’s action could be re-claimed. All photos by Mike Rhodes

§The notice
by Mike Rhodes 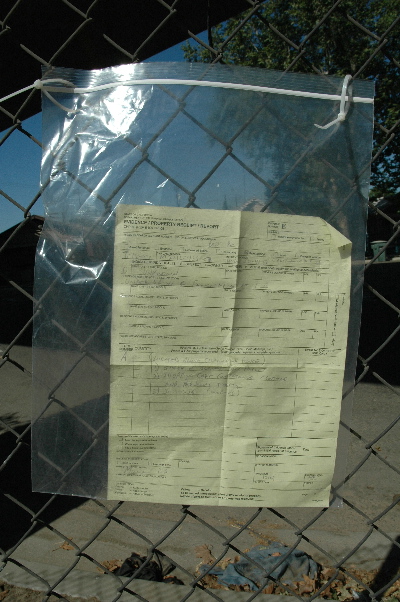 §The Hill
by Mike Rhodes 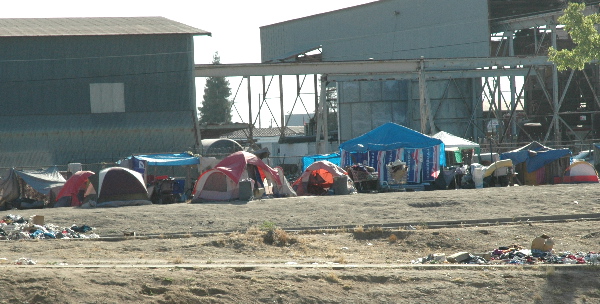 Many of the residents from “The Meadow” moved 100 yards east and now live at The Hill, the name of the encampment on G street. There are about 100 homeless people living at The Hill.
Add Your Comments
Comments (Hide Comments)
§Homeless Doing
by Dan Waterhouse
As I mentioned in another posting, I was at a community event where Fresno councilmember Brian Calhoun spoke yesterday. The question of Fresno's homeless came up, and here's what Calhoun said:

Supposedly, the Fresno Rescue Mission and Poverello House have agreed to move to the location the City is buying away from downtown. A source tells me there have been discussions but no committment by "The Pov" to move--they own a great deal of the property where they are presently located.

Calhoun mentioned working with the County, and claims the County won't talk with the City.

"No court in the world will stop us from moving the homeless out of downtown!" Calhoun made it clear the homeless who aren't placed elsewhere will be given the choice of moving to the new location or leaving Fresno.

Homeless advocates may have been sold a bill of goods by the Mayor and certain Council members.
Add a Comment
Support Independent Media
We are 100% volunteer and depend on your participation to sustain our efforts!