Add an Event
Newswire
Calendar
Features
Home
Donate
From the Open-Publishing Calendar
From the Open-Publishing Newswire
Indybay Feature
Publish to Newswire
Add an Event
Related Categories: Central Valley | Police State & Prisons
"Unacceptable Material"
by Boston Woodard (c/o allianceeditor [at] comcast.net)
Friday Jun 8th, 2007 8:42 PM
It is getting harder than ever to find out what is going on inside California prisons. One brave journalist, Boston Woodard, continues to get the word out. Read what he has to say and find out what obstacles he has to overcome to get this information in front of you. 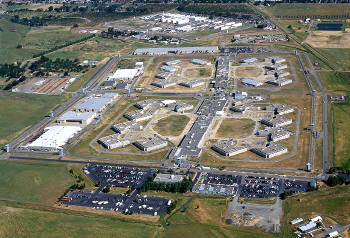 In November 2006, I wrote a recriminatory article that was published in the Community Alliance, "The Ongoing Wave of Secrecy, Inside California's Sub constitutional Prison System."

The piece was written after claims by the California Department of Corrections & Rehabilitation (CDCR) that prisoners were responsible for the limited media access behind prison walls. My article detailed how prison officials, not prisoners, take advantage of the lack of full media access inside the CDCR covering up their ill deeds.

The article also delineates how the California Correctional Peace Officer's Association (CCPOA), the prison guard's union, sensationalizes events behind these prison walls to advance it's agenda.

I mailed the article to editor Mike Rhodes for his review and consideration.

The article appeared in the December 2006 issue of the Community Alliance on page # l7. I received my (subscription) copy of the article in early December 2006. I tore out page #17 and

sent it to my brother who resides in another state. My brother makes copies of my columns and sends them back to me through the "regular" incoming mail system here at Solano State Prison in Vacaville California. The copies are given to other prisoners who are interested in reading them. Some copies are given to prisoner advocacy groups to reference.

In a January 30, 2007 letter, My brother urged me to call him "as soon as possible." He wrote that the envelope he mailed containing the copies was returned to him. The envelope was rubber stamped with "UNACCEPTABLE MATERIAL" on the face of it. The envelope also had "REFUSED" stamped in several places. And if that were not enough, there was a rubber stamp of a finger, expressing in definite terms, to return the correspondence to my brother.

Prison protocol calls for prisoner mail to be monitored (read by staff) unless it qualifies as "confidential correspondence." Rules governing the operation of the CDCR as written in the California Code of Regulations (CCR) Title #15, Section 3141, refers to Confidential Correspondence as mail sent to the following:

supervision. 4 County agencies regarding child custody proceedings, as clearly identified in the communication. 5 All state and federal judges and courts. 6 An attorney[s] at law listed with the state bar association. 7 The director [of corrections], chief deputy director, deputy directors, assistant directors, executive assistant to the director, and the chief of inmate appeals of the CDCR. 8 Legitimate legal service organizations including, but not limited to: the American Civil Liberties Union, the Prison Law Office, theYoung Lawyers section of the American Bar Association, and the National Association of Criminal Defense lawyers."

Nowhere in the guidelines is it written that we as prisoners can write the media confidentially. My December 2007 article details the reason this legitimate practice by the media was ripped from the rules by prison officials.

For more than twenty five years, members of legitimate news outlets were allowed the benefit of confidential correspondence with prisoners in California. My December article explained how Department of Correction (DOC) officials lied to the public to eventually convince the Office of Administrative Law (OAL) to change the rules prohibiting reporters from having access to "specific" prisoners and to end the confidential corresponding between journalists and convicts.

Prisoners are now subjected to intimidation and punishment by prison authorities for simply exercising their First Amendment, Constitutional rights. I believe they are still taking measures to impede my ability to frame my observations in publications such as the Community Alliance and various Web Sites. The CDCR settled a First Amendment lawsuit with me eight years ago; WOODARD V. DUNCAN CV 4182. Maybe some of them should take a look at the settlement agreement from that lawsuit to refresh their memories regarding what they should not be doing.

In accordance with all the rules, my article contained nothing that would present a danger, or a threat of danger, to any person. The article did not reference religious, racial, gang information or activities. There is no mention of escape or weapons manufacturing in the article. No rules or policies were violated in writing or sending the article to a legitimate news publication; the Community Alliance.

The article was deemed "UNACCEPTABLE MATERIAL" by someone in Solano State Prison's mail room because of the veracious nature of it's content. I was also told by a staff member that my "choice of words" in my articles is probably why my mail is disallowed or delayed at times. Another prison staff member said my descriptions of prison life are "acerbic lies."

I will continue to define my surroundings in an honest attempt to inform the public of the whole story, the other side of the story they are entitled to from behind these prison walls. I will not be intimidated or allow my observations to be swept under the rug.

I filed an internal appeal (#CSP-S-O7-O1O25) against Solano State Prison's mail room personnel. The appeal requests that no further reprisals be leveled against me for my journalistic activities, and that they cease and desist in the mishandling of my correspondence immediately. Prison officials have been slow playing my appeal, dragging it out, violating all the time restraints and conveniently losing (the appeal), months after filing it, forcing me to re-file. These tactics are used all the time by "Inmate Appeals Coordinators" throughout the prison system, stalling appeals in hopes of intimidating prisoners to drop their complaints. Mine will not be dropped.

To date, Solano prison officials have not satisfied my appeal which remains active.

Boston Woodard is a prisoner/journalist serving his sentence in Solano State Prison. He wrote for the San Quentin News, the Soledad Star and edited The Communicator. The CDCR has shut down all prisoner written and published publications in an effort to silence the voice from within.