by Liz Highleyman
Some 10,000 activists succeeded in blockading the G8 summit on June 6 and 7, relying on cunning and massive numbers to overcome an overwhelming police presence. 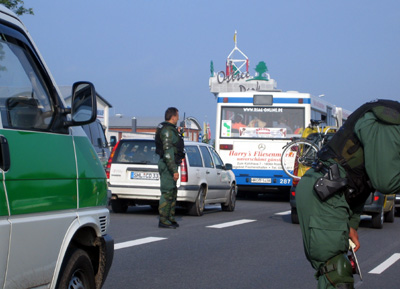 After undergoing pass controls on the roadways and bag searches at train stations and on the streets, protesters gathered at a large park in Admannshagan starting about 9 am on Wednesday. The early arrivals were later joined by marches coming from elsewhere, making up a diverse demonstration of about 2000 people, ranging from clowns to black blockers to organized Socialist and Communist groups.

At about noon, the protesters organized themselves under different colored flags and took off across the expanse of fields separating the park from the restricted zone and the fence around the he Grand Hotel Kempinski in Heiligendamm, where the meeting of the heads of the world’s eight largest economies was scheduled to begin.

The activists scattered across the fields, covering a wide area. As some attempted to cross a country road, police unleashed water cannons and a cloud of tear gas; medics were on hand to treat the injured. One group of a couple hundred people was surrounded by police for nearly half an hour, before seven helicopters descended into the field and the cops loaded up and departed.

The protesters continued on toward Börgerende-Rethwisch, where the different groups met up again and blockaded a roadway, covering a distance of nearly 1 kilometer (about half a mile). Many brought sleeping pads and continued the protest overnight. This blockade continued throughout the day on Thursday, and about 400 activist were prepared to spend a second night.

Meanwhile, another group also numbering in the thousands reached Gate II of the fence to the east of Heiligendamm. A sit-down blockade was established on Lindenallee, bordering the by railroad track, leading to Gate II out of Bad Doberan. Here, too, protester held their ground overnight, and their numbers increased again on Thursday.

To the west of Heiligendamm, thousands more protesters, mostly coming from Camp Reddelich and Camp Wichmannsdorf, managed to get to Gate I at Hinter Bollhagen, again crossing large fields. As the afternoon wore on, a group of clowns was penned in by police and ordered to leave; later, a sit-down blockade of about 100 people was dispersed.

On Thursday, about 1500 protesters again penetrated the fields and forests around Hinter Bollhagen and spent much of the day in stand-offs with the police around Gate I and along the fence. By late afternoon, the police had used water cannons, tear gas, and batons to prevent their further advance and push them back into the field between the fence and Steffenshagen.

Also on Wednesday, other activists blockaded the mainstream media headquartered in Kühlungsborn, preventing them from attending the summit; the journalists eventually had to be transported to Heiligendamm by sea.

Further to the south the same day, activists surrounded Rostock-Laage airport and blocked the A19 highway. This group faced a massive police and military response and was violently removed, with about 60 arrests. On Thursday, Greenpeace activists on raft were able to evade a police cordon off the coast of Heiligendamm.

Overall, these successful actions – which came despite months of planning by the police and an expenditure of 100 million Euros (135 million U.S. dollars) – showed the effectiveness of autonomous, decentralized direct action.

§ Protesters gather in park at Admannshagen
by Liz Highleyman 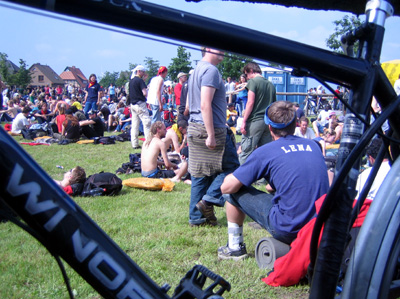 § And take off through field toward exclusion zone
by Liz Highleyman 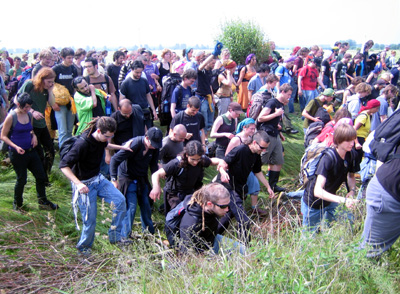 § The red team takes to the field
by Liz Highleyman 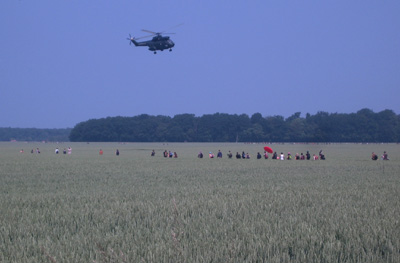 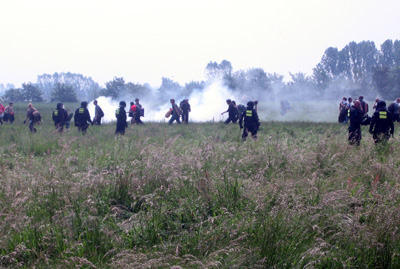 § Medics are ready to assist
by Liz Highleyman 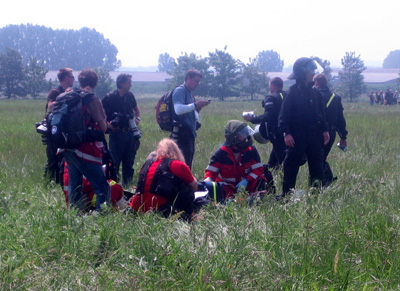 §Police were out in force with heavy equipment
by Liz Highleyman 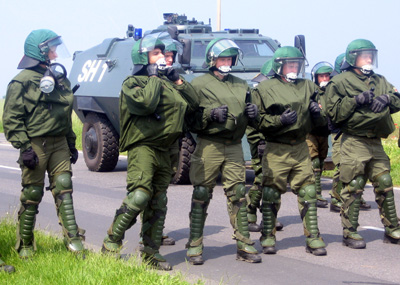 § Helicopters land to take away police
by Liz Highleyman 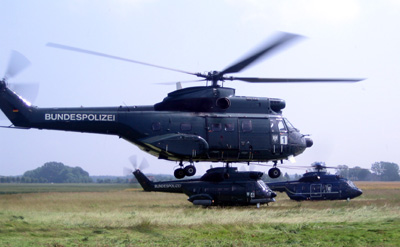 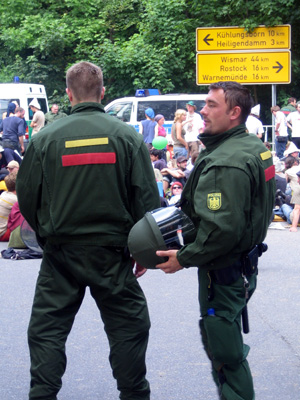 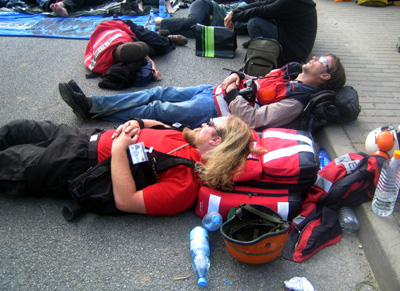 § Blockade at Borgerende
by Liz Highleyman 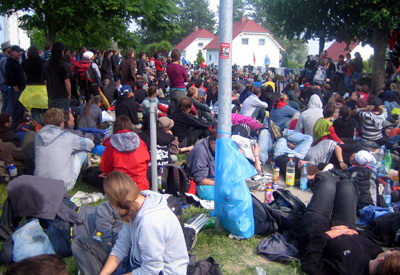 §Enjoying a rest
by Liz Highleyman 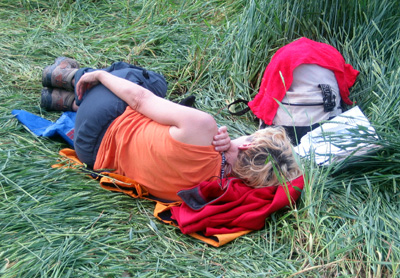 §Blockade continues near Bad Doberan on Thursday
by Liz Highleyman 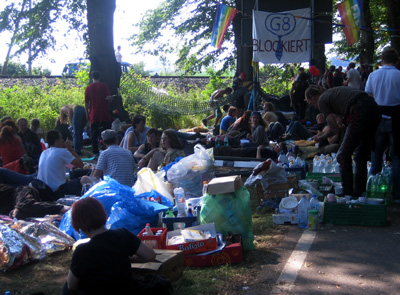 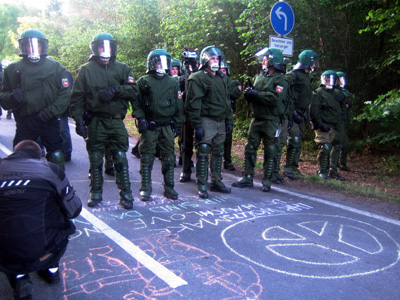 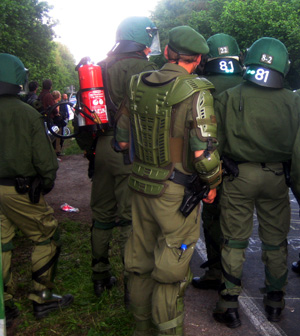 §But protesters were peaceful
by Liz Highleyman 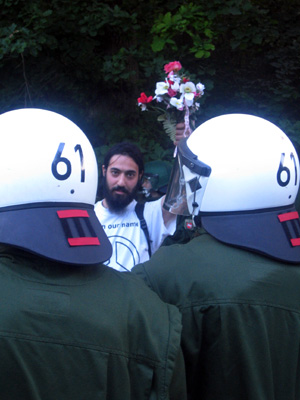 §More protesters on road to Hinter Bollahgen
by Liz Highleyman 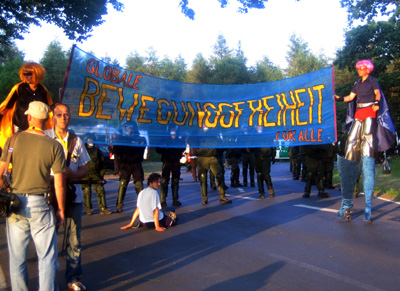 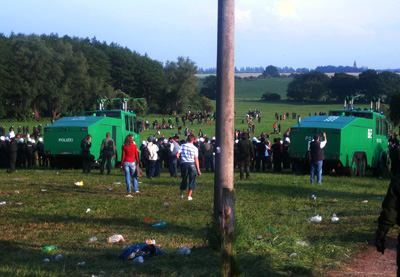 §Police and protesters at Steffenshagen
by Liz Highleyman 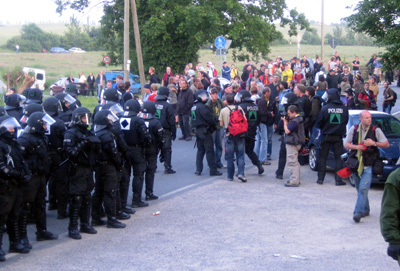 §The Evil Empire is successfully blockaded
by Liz Highleyman 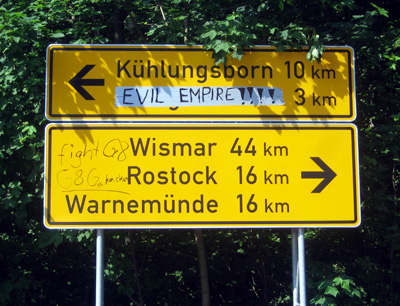