by Mike Rhodes (mikerhodes [at] comcast.net)
The California Highway Patrol is in the process of evicting homeless people in a downtown Fresno encampment. 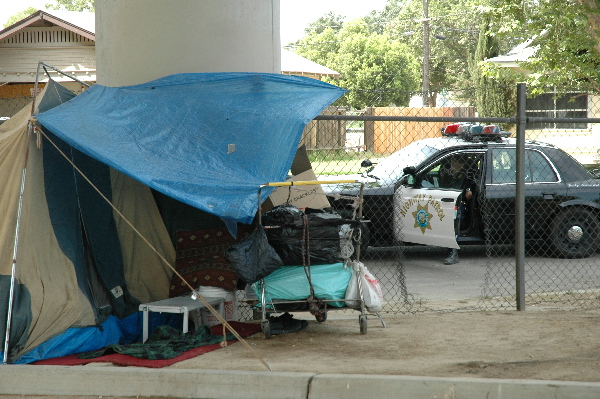 About two dozen residents of a homeless encampment in downtown Fresno were told by the California Highway Patrol to “move on” this morning. “The Meadow,” the name given the encampment by the residents, were given 72 hours to move on. The Meadow is located south of Ventura and west of G street and under a freeway overpass. Many of the residents moved here after being evicted from the Ventura & E street encampment last summer.

With no safe place to go, it is unclear if this encampment will break up and move elsewhere. Residents were visibly upset by the CHP order to move that was preceded by ID checks and threats of arrest. Lydia (not her real name) told me she was ordered to produce her ID by CHP officers. She told them that she did not want to show them her ID. The officers told her “then we are going to take you downtown and find out who you are.” Lydia said all she could find was a bus pass but that the officers accepted that as her ID. Homeless people in Fresno are constantly stopped and their ID run through a data base to look for outstanding warrants or probation violations.

The American Civil Liberties Union (ACLU) has the following advice for anyone stopped for questioning:

2. The police may “pat-down” your clothing if they suspect you are carrying a concealed weapon. Do not physically resist, but make it clear that you do not consent to any further search.

3. Ask if you are under arrest. If you are, you have a right to know why.

4. Do not “bad mouth” the police officer or run away, even if you believe what is happening is unreasonable. That could lead to your arrest.

There were conflicting reports, as this news story goes to press, about the eviction of homeless people at the encampment known as “The Hill.” The Hill is just east from The Meadow and is probably the largest homeless encampment in Fresno. There are 30 or 40 structures on The Hill with as many as 100 people living there at any one time. At least one homeless person said residents of The Hill had been told to leave by the CHP, but that report could not be confirmed.

I did ask the CHP officers on the scene for their version of what had happened this morning. The officer in charge refused to comment about their actions at the homeless encampment.

For a list of articles and documents about the struggle for civil liberties for homeless people in Fresno, see: http://www.fresnoalliance.com/home/homelessness.htm
END_OF_DOCUMENT_TOKEN_TO_BE_REPLACED
§The Eviction Notice
by Mike Rhodes 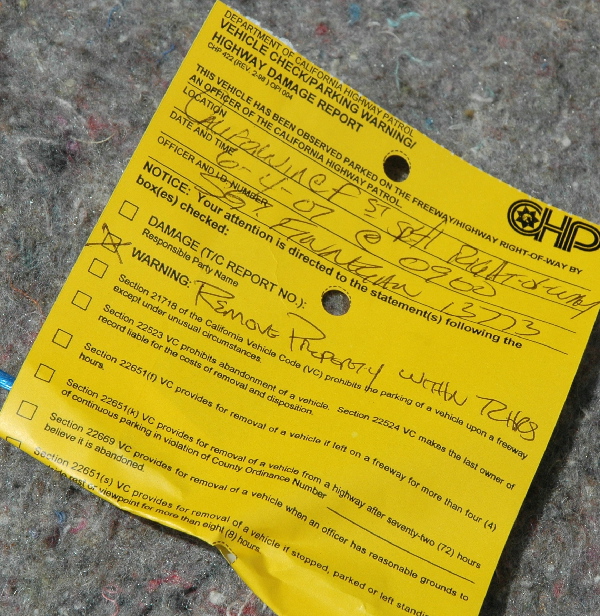 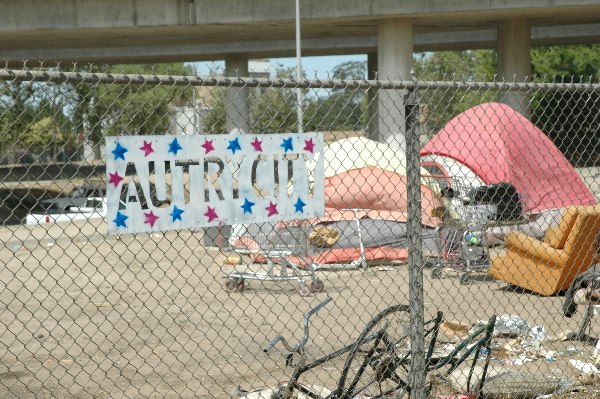 Someone put this sign up over the weekend attempting to rename The Hill after Fresno mayor Alan Autry.
§The Meadow
by Mike Rhodes 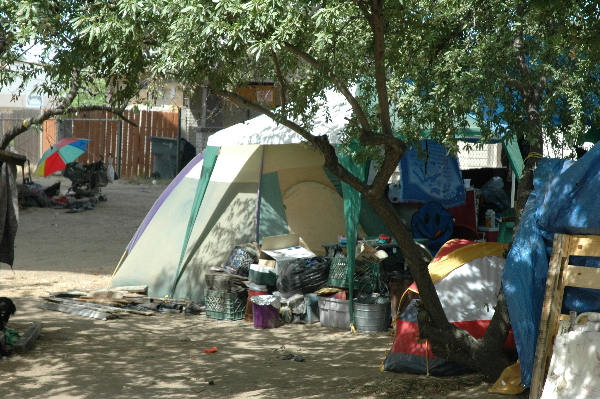 Most people in The Meadow live in tents like the one seen here. All photos by Mike Rhodes
§Eviction Notice on Man
by Mike Rhodes 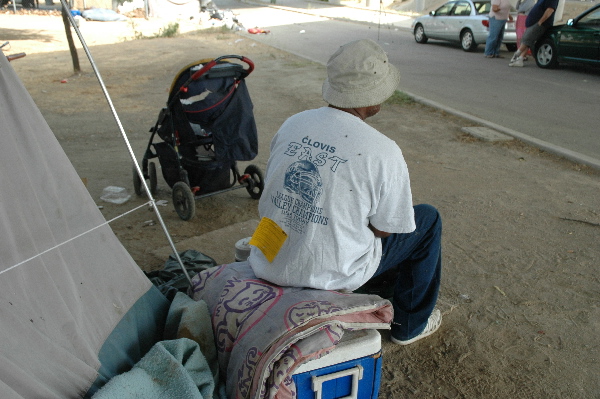 When I got to The Meadow this morning there were eviction notices everywhere, even on this homeless resident. He was surprised when I pointed it out to him.
Add Your Comments
Latest Comments
Listed below are the latest comments about this post.
These comments are submitted anonymously by website visitors.
TITLE
AUTHOR
DATE
Here is what happened on Thursday
Mike Rhodes
Wake UP Christians (and other religious citizens)
Ann g
Prayers needed for the "Religious" to wake up
Ann G
Fresno Housing Alliance
Randy Nelson
Support Independent Media
We are 100% volunteer and depend on your participation to sustain our efforts!