Add an Event
Newswire
Calendar
Features
Home
Donate
From the Open-Publishing Calendar
From the Open-Publishing Newswire
Indybay Feature
Publish to Newswire
Add an Event
Related Categories: International | Immigrant Rights
Pictures from G8: Make Borders History Day of Action
by david
Monday Jun 4th, 2007 12:25 PM
Today was the day of action against borders and nations, in support of immigrants' and refugees' rights here in Germany at the counter-G8 demonstrations. While around 5,000 people took part in the main march, starting at an immigration detainment center, police had a tremendous presence and successfully repressed the peaceful march. 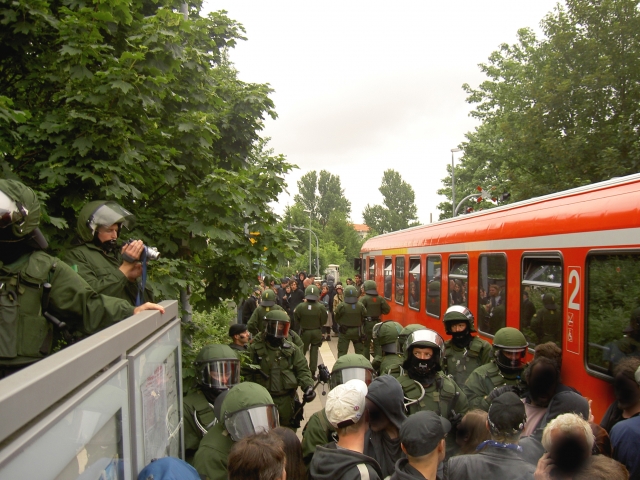 original image (2592x1944)
As soon as we arrived at the train station from the Redlich Camp riot police surrounded us and tried to make us get back on the train. Then they said we could proceed but only after showing ID and letting them search our bags.
§Joining the march
by david Monday Jun 4th, 2007 12:25 PM 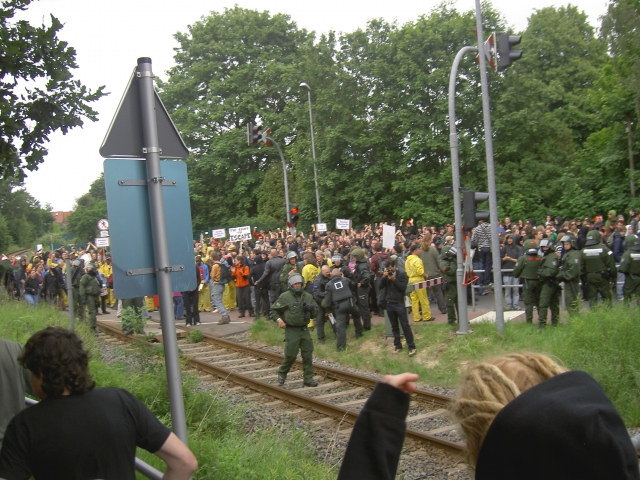 original image (2592x1944)
We were let go without ID checks or searches after a large portion of the march came to the station in solidarity, blocking the train tracks and pressuring the police to release us.
§train
by david Monday Jun 4th, 2007 12:25 PM 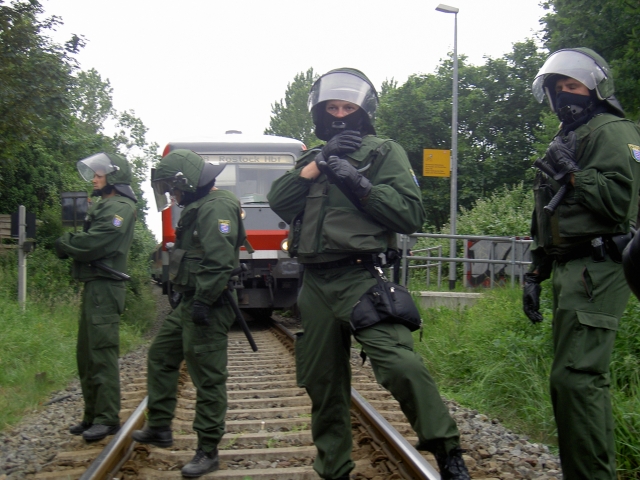 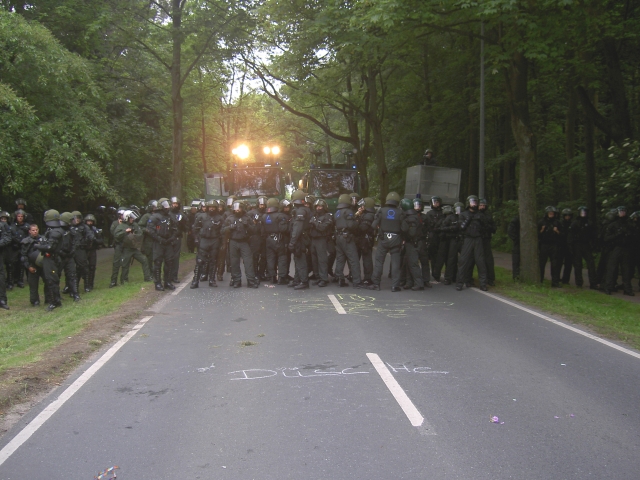 original image (2592x1944)
After a rally at the detainment center the march was to begin, but the police showed up with water cannons, armored vehicles, and hundreds of riot cops and refused it to move. Their excuse was that 500 "violent protesters" (ie- people wearing black) had joined the march. Ironically a march for the rights of all people to move freely was denied the right to move.
§march begins
by david Monday Jun 4th, 2007 12:25 PM 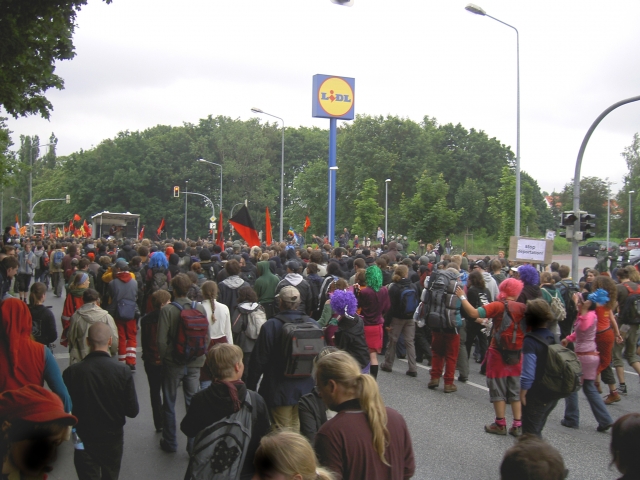 original image (2592x1944)
After negotiations with the police the march was allowed to begin under the condition that no masks or sunglasses were worn. A warning was given that anyone wearing black hoodies with sunglasses or masks, or carrying empty bottles or stones would be arrested.
§snatch squad
by david Monday Jun 4th, 2007 12:25 PM 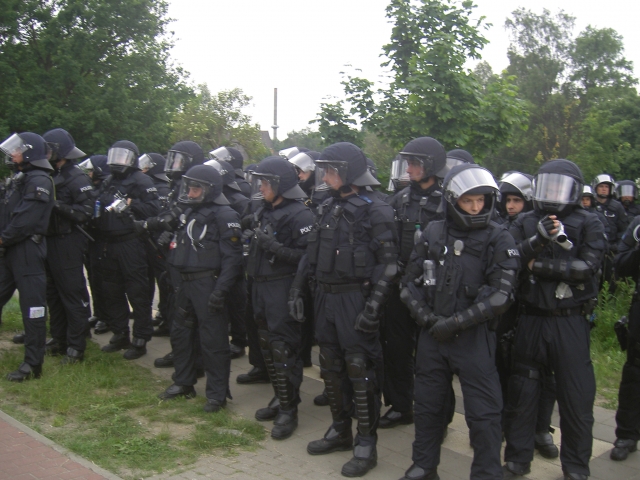 original image (2592x1944)
The march was followed by multiple units of riot cops and snatch squads, and also by water cannons and armored vehicles, despite the fact that the crowd was absolutely peaceful and no provocation was given.
§marching
by david Monday Jun 4th, 2007 12:25 PM 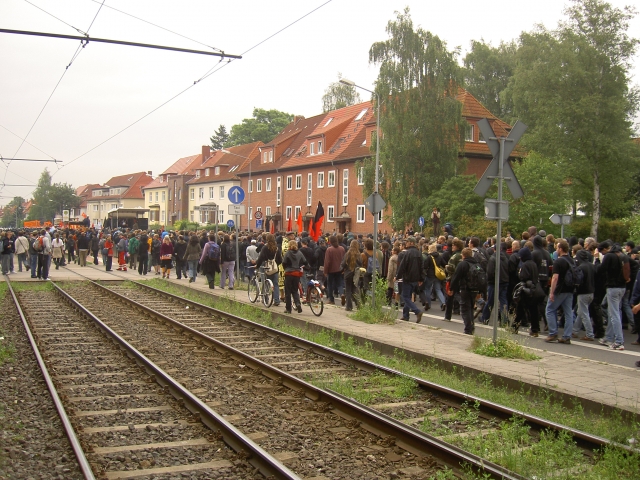 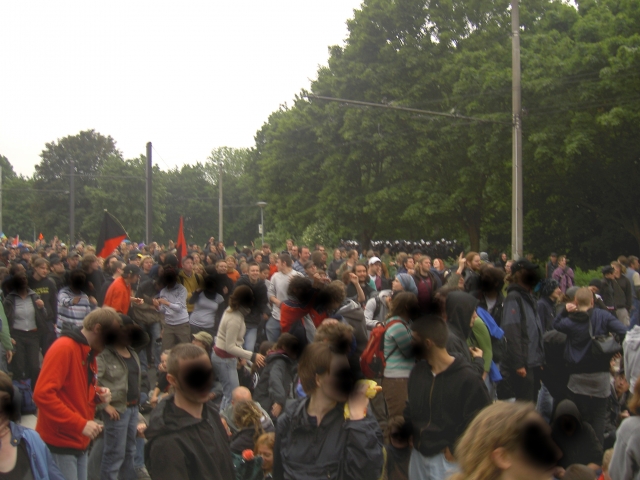 original image (2592x1944)
After reaching the outskirts of Rostock the march was stopped by police. Their reason was because the march permit was only for 2,000 people, but there were 10,000 present. However, nobody at the march believes the number was really that high, probably more around 5-6,000, and that the police inflated the number as an excuse to end the march.

It was offered that it could continue outside of the city but the organizers said that was unacceptable. The march decided to disperse and reconvene at the city harbor, the original destination. As I write this there are thousands rallying at the harbor.
Add Your Comments
Support Independent Media
We are 100% volunteer and depend on your participation to sustain our efforts!