by Chris, Tina, and Rob
Under sunny skies the 2nd day of mobilizations in Rostock, Germany took place under the theme of "Resistance is Fruitful". A colorful march peppered with strange genetically modified beasts and plants in puppet form, yellow anti-GMO balloons, rocked to a live stage towed by an immense tractor, as well as a delicious samba drum corps, conducted a tour of exploitative agribusiness and genetic businesses in Rostock. 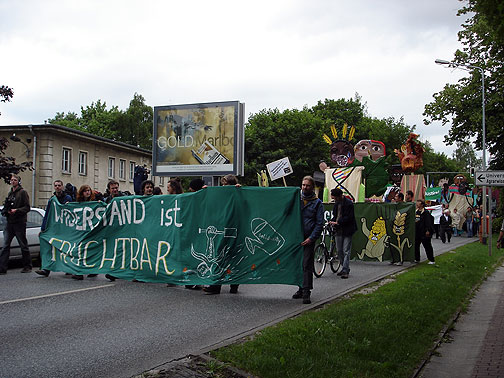 The international participation in the anti-G8 demonstrations is undeniable. The second day of actions against the G8-summit, taking place under the banner "Resistance is Fruitful", denounced its agricultural policies. Farmers, peasants, small producers, landless people and agricultural workers from countries around the world, including Canada, Nicaragua, Brazil and Nepal, participated strongly represented by, among other groups, Via Campesina.

The colorful, peaceful protest of roughly five hundred demonstrators gathered
under cloudy skies near the Departments of Agriculture and Environment
at the University of Rostock and marched towards downtown. The faculty of these
departments took part in the march, riding into town in a covered wagon towed by a trailer.
Enormous puppets in the shapes of carrots and other vegetables marched alongside farmers.

Criticizing the G8's hollow rhetoric of fighting hunger and poverty, the march
underscored how the wealthiest industrial nations systemically pursue neoliberal
policies, such as privatization of land and water, that are to the detriment of land, workers and farmers.

The demo included groups that occupy land, oppose genetically modified
foods and gather seeds to preserve traditional seeds. Protestors stopped along the
way at LIDL, the German discount store, calling attention to how cheap prices are
delivered by ripping off farmers, who are paid less than the costs of production for
their milk, and by ripping off workers by underpaying them. Additional stops at
McDonalds and Burger King thematized factory farming of animals. After the march, bike rides were planned to Gross Luesewitz to protest the Agricultural-Genetic-Technology there.
Related Categories: International | Global Justice & Anti-Capitalism
§A Beast with No Name!
by Chris, Tina, and Rob 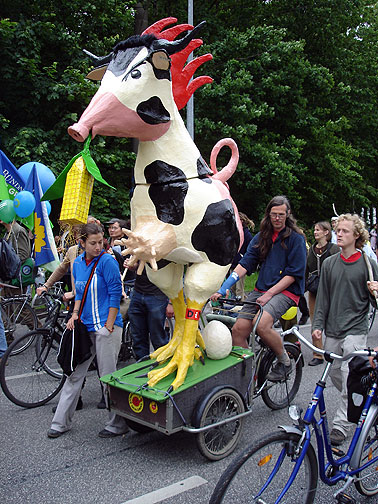 §Puppets lead the way
by Chris, Tina, and Rob 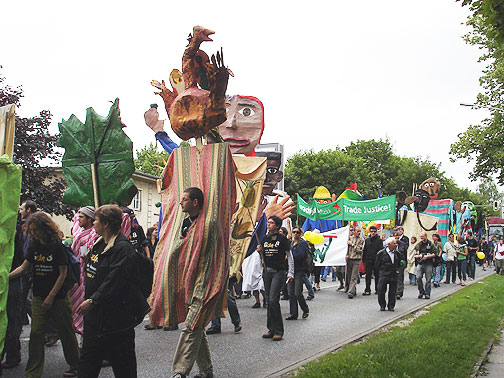 §Puppets cluster at the front
by Chris, Tina, and Rob 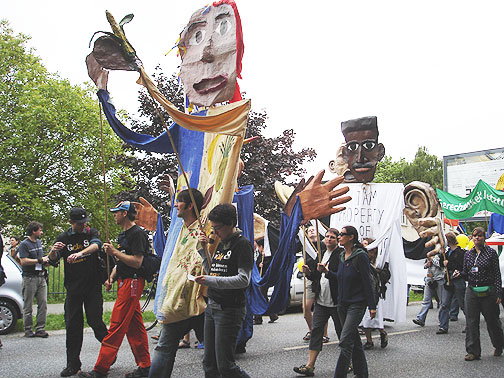 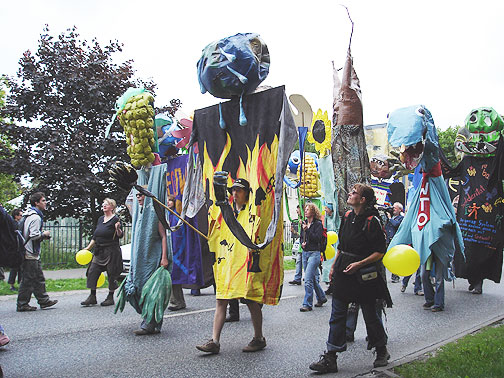 §Nightmares and fantasies fill the streets
by Chris, Tina, and Rob 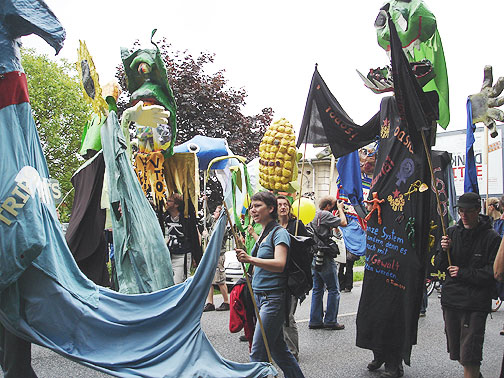 §Samba drummers keep the beat
by Chris, Tina, and Rob 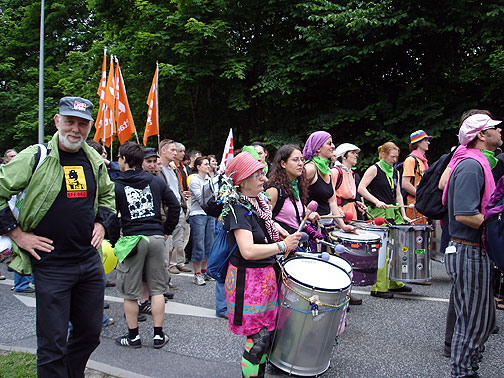 §What the G8 really promises Africa
by Chris, Tina, and Rob 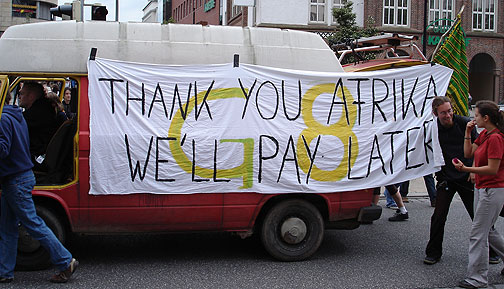 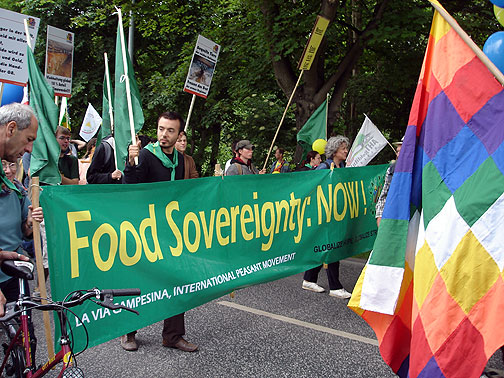 La Via Campesina, an internation network of small farmers, has a strong presence in Rostock, as they have at previous global summits.
§Local farmers get involved
by Chris, Tina, and Rob 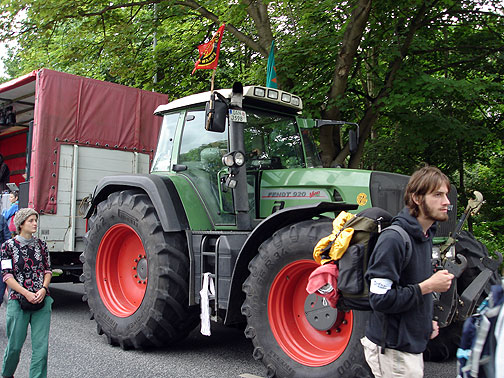 §Behind the tractor: Music and more!
by Chris, Tina, and Rob 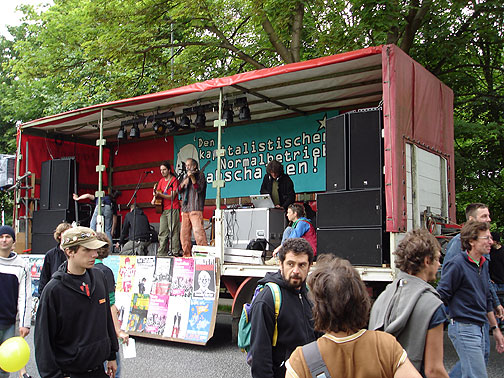 §A call to demilitarize the landscape
by Chris, Tina, and Rob 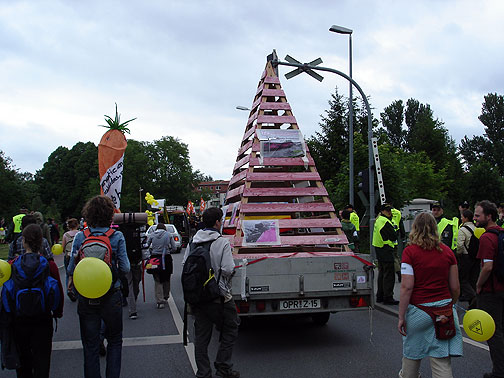 This pink triangle is popping up at all the demos here, to dramatize the NATO plan to utilize a former East German area as a "bombodrom", or bombing practice target area. They place wooden triangles on the ground as targets, so this pink triangle is to call for a different, civil use of the same lands.
§Patent Monster gorges itself on life's essentials
by Chris, Tina, and Rob 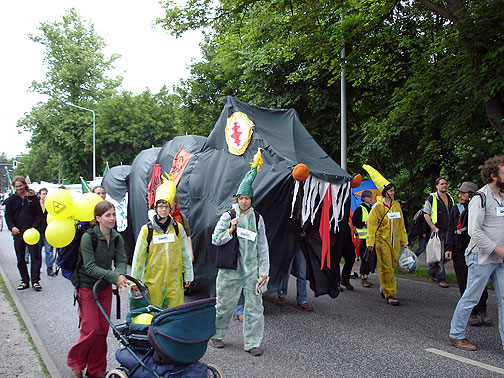 A contingent from BUKO, a campaign against bio-piracy, snakes through the streets of Rostock. The group is fighting efforts to copyright genes and molecular configurations as well as deny generic life-saving drugs.
§Rostockians in the House!
by Chris, Tina, and Rob 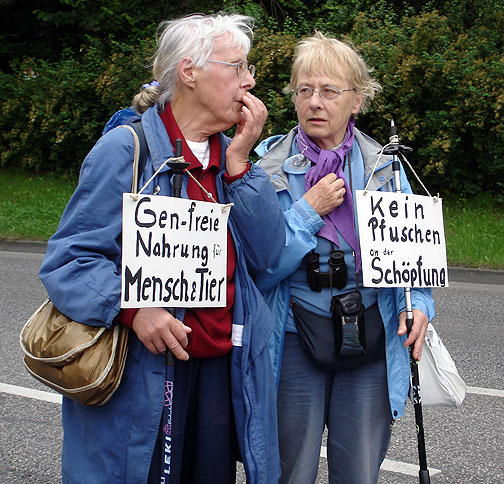 These two women brought their messages to the streets today: 1. Genetically free nutrition for humans and animals.
2. No tinkering with creation.
§Money money money
by Chris, Tina, and Rob 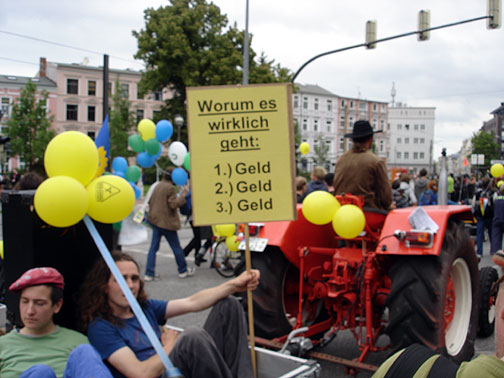 Sign reads: What It's Really All About--1. Money. 2. Money. 3. Money.
Add Your Comments
Support Independent Media
We are 100% volunteer and depend on your participation to sustain our efforts!