Add an Event
Newswire
Calendar
Features
Home
Donate
From the Open-Publishing Calendar
From the Open-Publishing Newswire
Indybay Feature
Publish to Newswire
Add an Event
Related Categories: San Francisco | Anti-War
Three students begin march across America to oppose war
by Jeff Paterson (jeff [at] paterson.net)
Tuesday May 22nd, 2007 10:47 PM
San Francisco (May 22, 2007) After a brief press conference in front of San Francisco’s City Hall, three students embarked on a "March for Peace” yesterday with the intent of walking every step of over 3,000 miles across North America. If all goes to plan, they will arrive in Washington DC in late August. 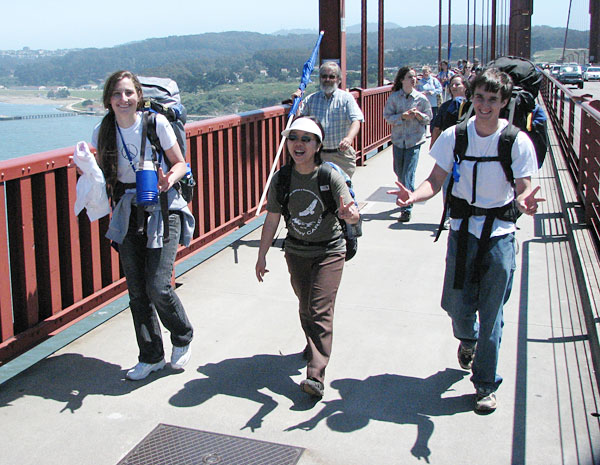 A rally is planned in Omaha, Nebraska to mark the march midpoint. “We are organizing a march across the United States over the summer of 2007 to raise awareness about the need for peace and to unite people in a discussion of how we can take action and solve problems nonviolently,” declared march organizer and initiator Ashley Casale.

Supporters from various local anti-war organizations Not in Our Name, The World Can’t Wait – Drive Out The Bush Regime, Code Pink, and the International Socialist Organization helped kick off the journey with a small rally and accompanied the marchers to the Golden Gate Bridge. 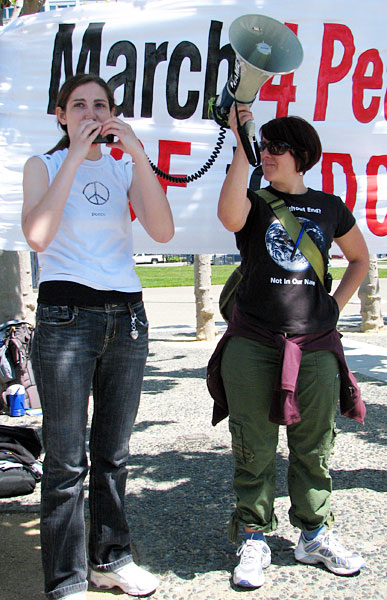 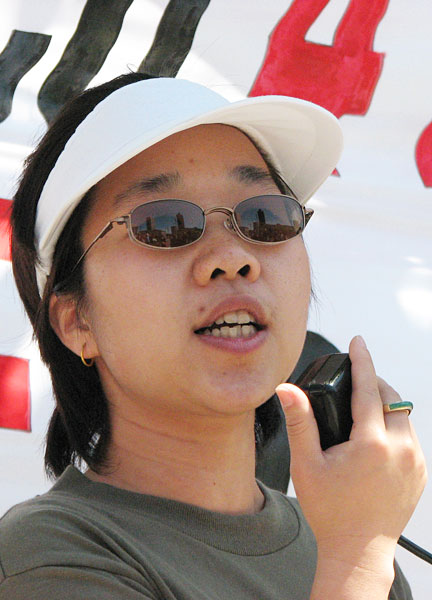 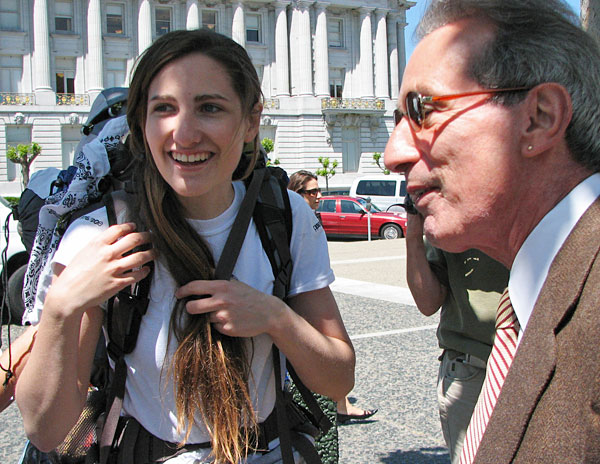 §High School students skip class to join the first day of the march
by Jeff Paterson Tuesday May 22nd, 2007 10:47 PM 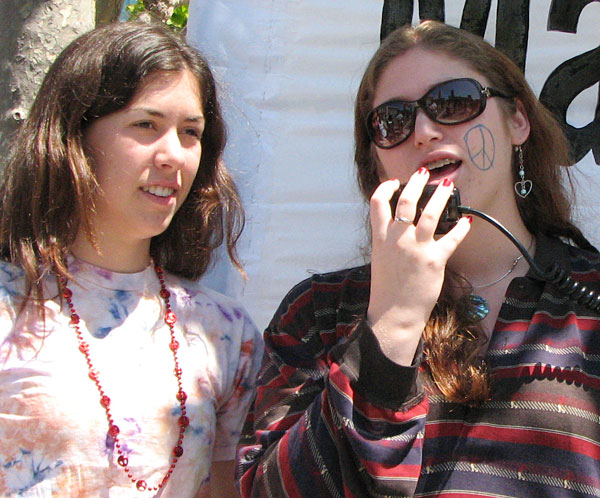 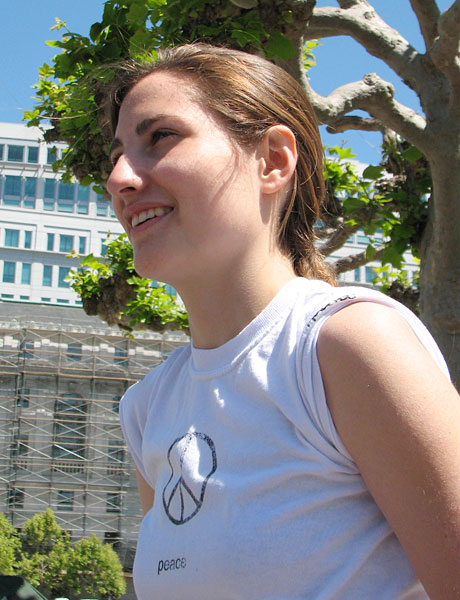 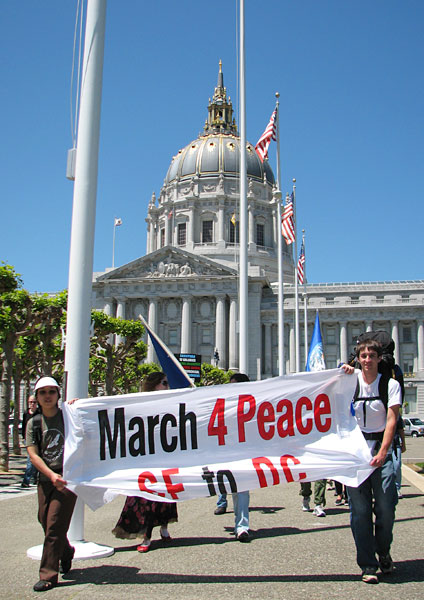 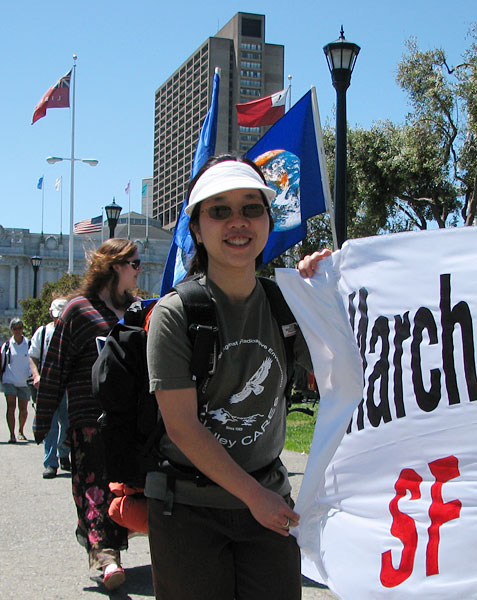 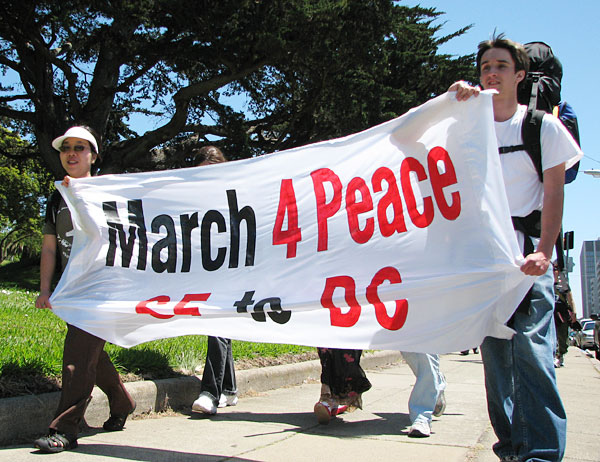 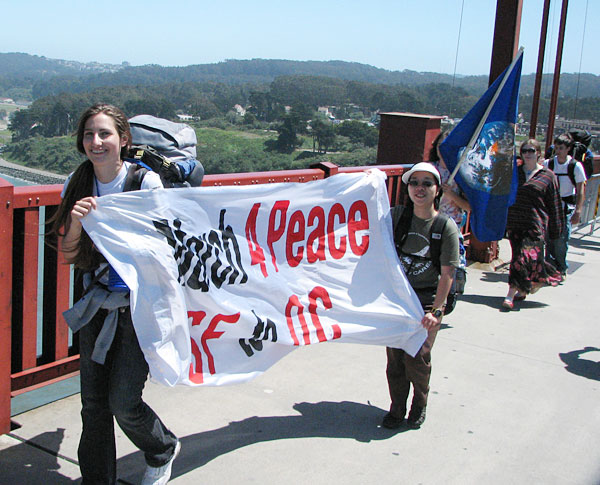 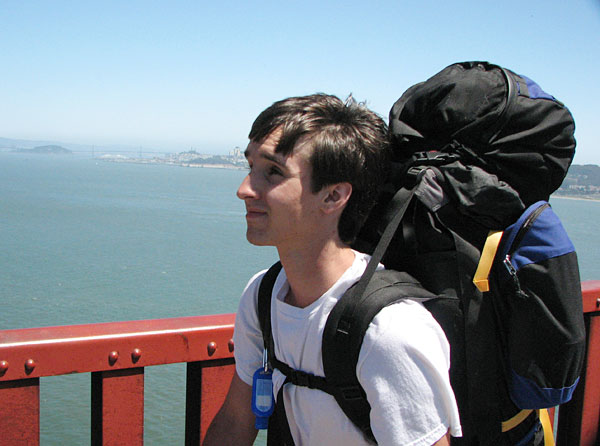 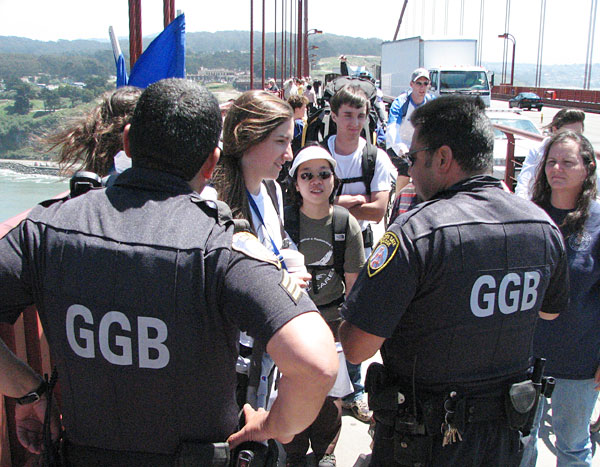 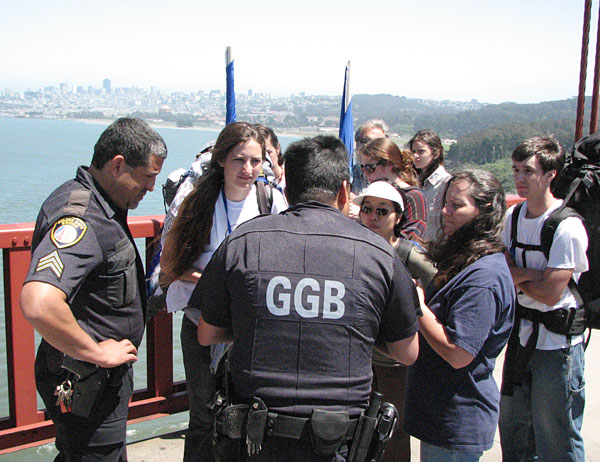 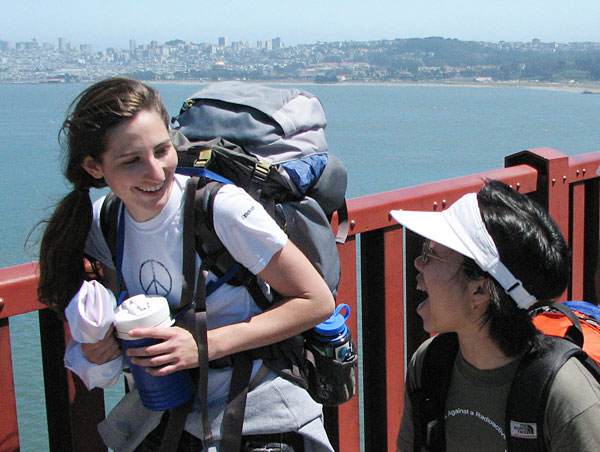 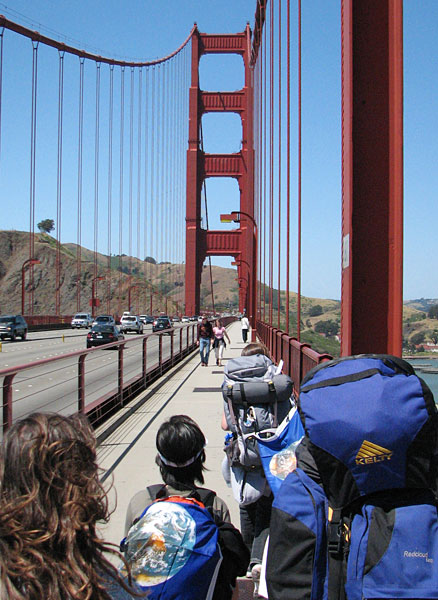 §Updated info on marchers
by Jeff Paterson Tuesday May 22nd, 2007 11:20 PM
Michael Israel (18 yrs old) is from Jackson, California. His parents and younger brother joined him for the first day of the march. He is pictured on right of first photo, and profiled on "Marcher on Golden Gate Bridge"

Susan is UC Berkeley grad student. She is pictured in the center of the first photo, and profiled on "Marcher speaks to media"
Add Your Comments

You Rock Hard. Sending Love and Peace as you journey towards Peace...
Add a Comment
§Wishing You a Safe and Peaceful Journey
by Cynthia Papermaster
(cynthia_papermaster [at] yahoo.com) Friday May 25th, 2007 9:59 PM
Dear Marchers,
I am so grateful to you for undertaking this difficult march, and wish you a safe and peaceful journey. What incredible courage you have! I hope you have a fantastic experience and that everyone you meet treats you with respect and listens to your message of peace.
All the best,
Cynthia Papermaster, CodePink Berkeley
Impeach for Peace!
Add a Comment
§Your courage and heart are bigger than the distance you are covering!
by Liz Duhoski
(lduhoski [at] millbrook.org) Wednesday May 30th, 2007 6:39 PM
Good luck!

I am so proud of you.
Add a Comment
§Good luck with the res!
by Rachael Knopf
Wednesday May 30th, 2007 7:31 PM
Nati and I had a great time walking with you the first day, good luck with the rest of your trip, we'll be keeping an eye on the news for you!
http://www.myspace.com/jump4joyjoy
Add a Comment
§Best to you Michael and Ashley, from Amador County (where Michael lives)!!
by Dr. Cheryl Schimenti
Thursday Jun 7th, 2007 10:20 PM
Sending you BEST wishes for a PEACEFUL continuation of your journey. Michael, I'm so proud of you, and I know everything is going to go well during this amazing experience. Glad you got to meet my friend and fellow CodePinker, Marie, in the Tahoe area. She spoke so well of you. May everyone you meet listen to the message of Peace you and Ashley bring, and think of us here at home thinking of YOU! Goddess bless you both! I just might see you in a few days, never know ;)

Cheryl Schimenti, CODEPINK, Amador County, California
Add a Comment
§update
by via email
Saturday Jun 9th, 2007 12:10 PM
Only Michael Israel (18) and Ashley Casale (19) are still in the march for peace. They should be arriving in Austin, NV by sometime Saturday, 6/9, a few days behind schedule. They are now on bikes to cover some of the most isolated areas of Nevada, but will ditch the bikes when they are in a more populated area. My daughter, and Michael's cousin, Liz Hill of Reno is providing support (water, food, helping with sleeping arrangements) for them from the Reno to Austin area, then she hopes to persuade a friend to continue the support through the state of Nevada.
One of the most difficult things Michael and Ashley face is getting the support they need along the way, but these two kids are as dedicated as ever to this cause.

From Michael's aunt Ginny
Add a Comment
§I admire your courage
by S. Alday
Friday Jul 27th, 2007 5:37 AM
Ashley, Michael, I admire you for what you are doing. You both are so brave. Personally, I believe we need to defend the United States against terrorists, I support our President and our Troops wholeheartedly. But you two are amazing. If only more people in these United States would stand up for something, imagine what a wonderful country this could really be. You see, that is also how I feel about our Troops. They are standing up for what they believe and how can we as Americans NOT support them? Don't get me wrong, I would love to see Peace. Peace here, Peace worldwide. But honestly, I doubt I live long enough to witness that kind of Peace. But, you keep up the good work and I wish you well.
Add a Comment
§Blessings
by Bud Morris
Friday Jul 27th, 2007 6:02 AM
God bless you both for undertaking this important mission. A Vietnam Vet
Add a Comment
Support Independent Media
We are 100% volunteer and depend on your participation to sustain our efforts!