Add an Event
Newswire
Calendar
Features
Home
Donate
From the Open-Publishing Calendar
From the Open-Publishing Newswire
Indybay Feature
Publish to Newswire
Add an Event
Related Categories: Santa Cruz Indymedia | Anti-War
Audio from May 14th War Resisters event in Watsonville.
by AC Sandino II
Tuesday May 22nd, 2007 10:09 AM
On Monday May 14th at 7pm, at the United Presbyterian Church of Watsonville, four Iraq war resisters met with Watsonville residents, told their stories, and answered questions from the crowd. The event was sponsored by the GI Rights Hotline & Draft Alternatives program of the Resource Center for Nonviolence (RCNV), the Santa Cruz Peace Coalition, the Watsonville Women's International League for Peace & Freedom (WILPF) and the Watsonville Brown Berets, Santa Cruz Veterans for Peace Chapter 11.
Listen now:
Copy the code below to embed this audio into a web page:
Download Audio (43.9MB) | Embed Audio
Iraq combat veterans, Agustin Aguayo and Camilo Mejia, were joined by fellow war resisters Pablo Paredes and Robert Zabala at a series of Northern California events May 9-18. One of the stops included Watsonville where the 4 men spoke in local high school class rooms and on local station KUSP 88.9 FM in the morning and at the First Presbyterian Church that evening. Check out this link http://www.kusp.org/shows/totb.html and click on the May 14 th program to hear the show streamed.

Just weeks after being released from a military stockade in Germany for refusing redeployment to Iraq, Agustin Aguayo was joined by fellow war resisters on a greater San Francisco Bay Area speaking tour. Agustin served almost eight months in prison after fighting for nearly three years to be recognized as a conscientious objector. Agustin has explained for the first time why he chose jail instead of redeploying to Iraq.

Camilo Mejia was one of the first Iraq combat veterans to refuse to return to Iraq and served almost nine months in prison for his stand against war. In his upcoming book, "Road from ar Ramadi; The Private Rebellion of Staff Sergeant Camilo Mejía," Camilo gives an inside view of what it felt like to be a soldier on the ground in Iraq. Camilo's book will be available at his events and is now available on amazon.com and soon in your local independent bookstore.

Pablo Paredes refused to ship out in support of the Iraq War at the San Diego Naval Station in 2005. He is now a GI rights counselor and counter-recruitment activist.

Robert Zabala is a Marine recently ordered discharged as a Conscientious Objector (CO) by a federal judge after fighting for nearly four years to be recognized as a CO. 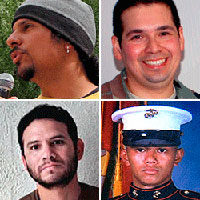 Borrowed from another Indybay article.
Add Your Comments
Support Independent Media
We are 100% volunteer and depend on your participation to sustain our efforts!