Add an Event
Newswire
Calendar
Features
Home
Donate
From the Open-Publishing Calendar
From the Open-Publishing Newswire
Indybay Feature
Publish to Newswire
Add an Event
Related Categories: California | East Bay | San Francisco | Santa Cruz Indymedia | Anti-War | Education & Student Activism
UC Hunger Strikers, Supporters Confront UC Regents On Nuclear Weapons Ties, 13 Arrested
by "no nukes" hunger striker will
Sunday May 20th, 2007 10:06 PM
More than 100 people, including about 40 on the 9th day of a fast to protest the University of California's ties to the US nuclear weapons complex, delivered their demand for UC nuclear weapons lab severance directly to the UC Board of Regents at their meeting at UC San Francisco on May 17th. After several of the protesters vocally and persistently confronted the Regents on refusing to consider the demand, Regent Norman Pattiz ordered the dozen or so UC Police officers on hand to clear the room, moments after telling them to "go out and have some lunch." 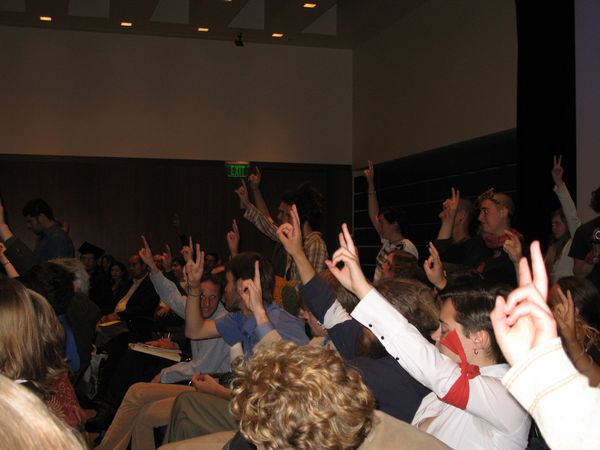 More than 100 people, including 40 on the 9th day of a fast to protest the University of California's ties to the US nuclear weapons complex, delivered their demand for UC nuclear weapons lab severance directly to the UC Board of Regents at their meeting at UC San Francisco on May 17th. After several of the protesters vocally and persistently confronted the Regents on refusing to consider the demand, Regent Norman Pattiz ordered the dozen or so UC Police officers on hand to clear the room, moments after telling them to "go out and have some lunch."

Thirteen who refused to leave were arrested after collectively holding out against the UCPD's "pain compliance" techniques for close to 40 minutes. Most of those arrested were on hunger strike.

The hunger strike began on May 9th, with groups of students, alumni, and supporters at UC Santa Barbara, UC Santa Cruz, and UC Berkeley initiating a combination of water-only, juice, and other types of fasts. It is the latest escalation of a five-year-long campaign to pressure the Regents to sever their nuclear ties and thereby stop providing much-needed legitimation to the US nuclear weapons complex's keystone facilities. The UC has been the primary nuclear weapons warhead engineering and testing contractor in the United States since the dawn of the Nuclear Age, having managed the Los Alamos and Lawrence Livermore nuclear weapons compounds since their inceptions. The UC recently formed limited-liability corporations with Bechtel and other war profiteering corporations to manage each facility.

The demand of the hunger strike is as follows: "We call on the University of California Board of Regents to withdraw fully and immediately from their contracts to manage the Los Alamos National Laboratory (LANL) and Lawrence Livermore National Laboratory on the grounds that the Reliable Replacement Warhead program and LANL’s ongoing preparations to conduct plutonium pit manufacturing both clearly violate Article VI of the 1970 Nuclear Non-Proliferation Treaty."

At The Regents meeting, the "No More Nukes In Our Name!" contingent began its day by participating in the Board's public comment period at 8 a.m., which was extended from 20 to 30 minutes, according to Regents Chair Richard Blum, to accommodate the inordinate number of people signed up to speak -- over 60. As is customary at well-attended Regents meetings, still only a fraction of those who signed up were permitted to speak.

"For nine days, my stomach has ached for a lack of food," said Williams of UCSC. “But not as much as my heart aches when I think of kids that can’t take nutrients into their digestive systems because of nuclear radiation poisoning.”

The protestors next assembled outside, where -- in stark contrast to the Regents' profoundly anti-democratic meeting procedure -- each person had the opportunity to speak in some detail regarding their motivation for being part of the gathering.

He then recommended that they read a Wall Street Journal op-ed by Henry Kissinger and other former US military and State Dept. officials advocating nuclear disarmament ("already read it," most replied), advised that they go lobby Congress instead of the Regents, and concluded that they should "go out and have some lunch." Moments later, a group of hunger strikers stood up and reiterated that the Regents should consider a resolution to meet their demand. Pattiz ordered the room cleared, and the Regents evacuated while the police encircled the demonstrators.

The 13 people arrested were released within two hours, after receiving citations. There were no major injuries, though some sustained cuts and bruises, and a few of the hunger strikers reported nearly passing out while having pressure applied to their carotid artery on both sides of the neck. Most were ordered to appear in court on July 3 to answer charges of "failure to disperse" and trespassing."

In the weeks leading up to the meeting, several hundred people, including supporters from around the world, wrote to The Regents prior to the UCSF meeting advocating that they consider a resolution to meet the hunger strikers' demand. Dozens of others telephoned the Regents secretary, who also personally received a copy signed by the 15 initial UCSB hunger strikers from UCSB Chancellor Henry T. Yang, according to Yang.

Immediately after Pattiz issued the protestors the dispersal order, a handful of Regents, including Odessa Johnson and incoming Student Regent Benjamin Allen (a law student at UC Berkeley) offered to meet with the hunger striker "leaders," in Johnson's words, to attempt to address their concerns. It was the first time any Regent had ever offered to meet with representatives of the UC demilitarization campaign in its current iteration.

Most hunger strikers broke their fasts following the Regents meeting, though at least one has pledged to continue indefinitely. Following the Regents meeting action, the momentum is clearly on the UC demil movement's side. It has accomplished several crucial goals, including inspiring a UCSB faculty senate resolution to support the hunger strikers' concerns, putting the Regents publicly on the defensive with regard to their role as weapons labs managers (including in an LA Times article), and attaining a promise to consider the hunger strike demand from members of the Board. 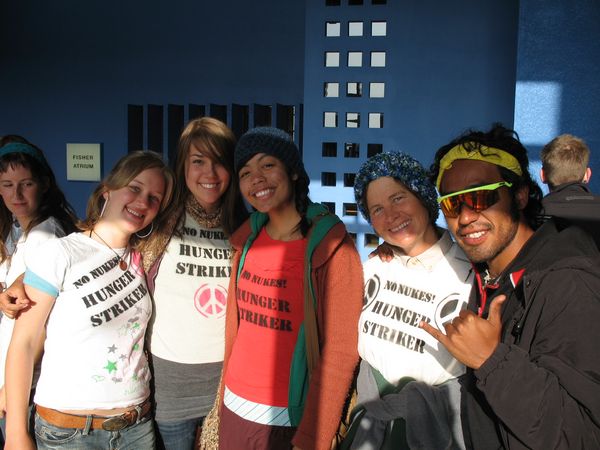 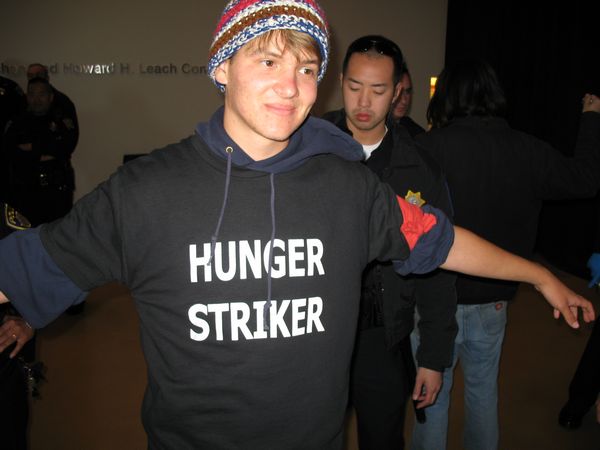 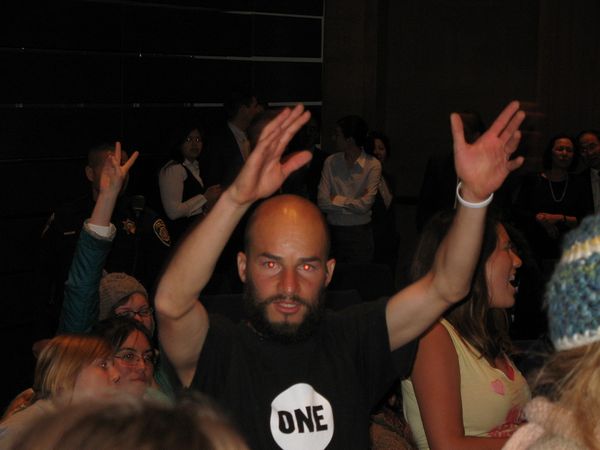 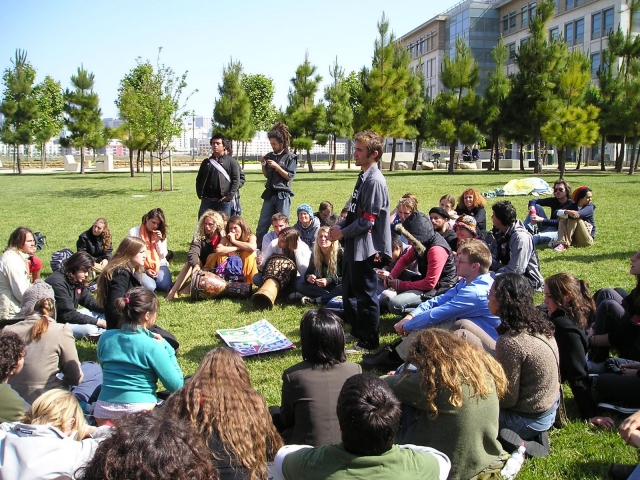 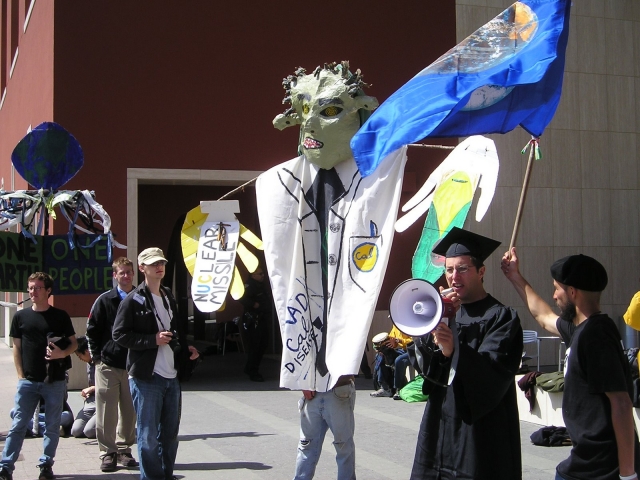 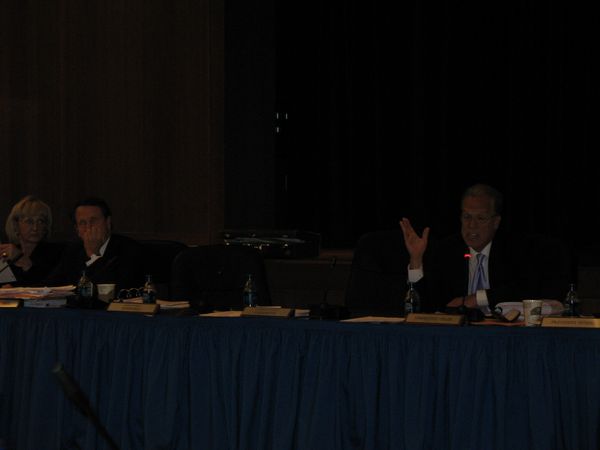 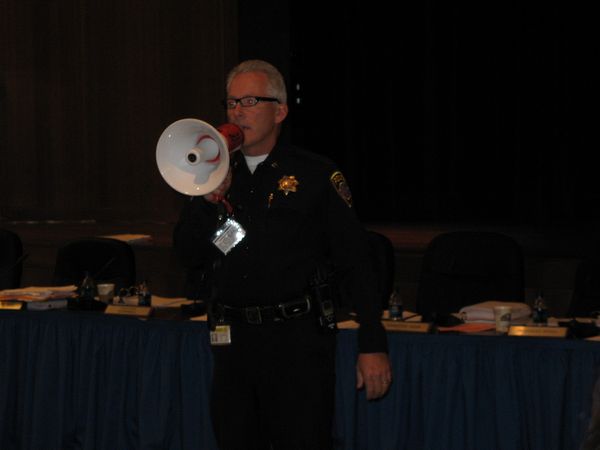 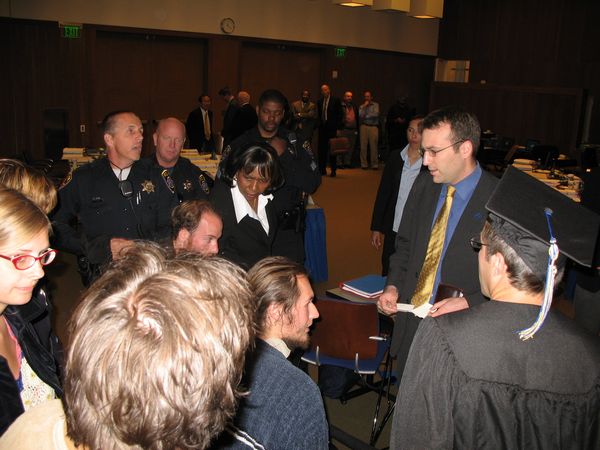 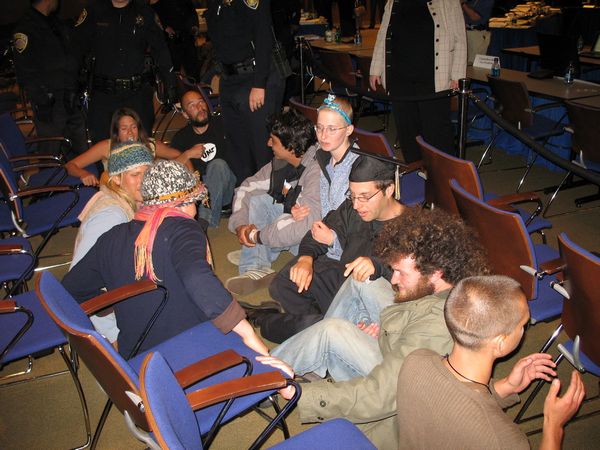 §The Protest Continued Outside the Meeting Room as the Arrests Occurred
by "no nukes" hunger striker will Sunday May 20th, 2007 10:06 PM 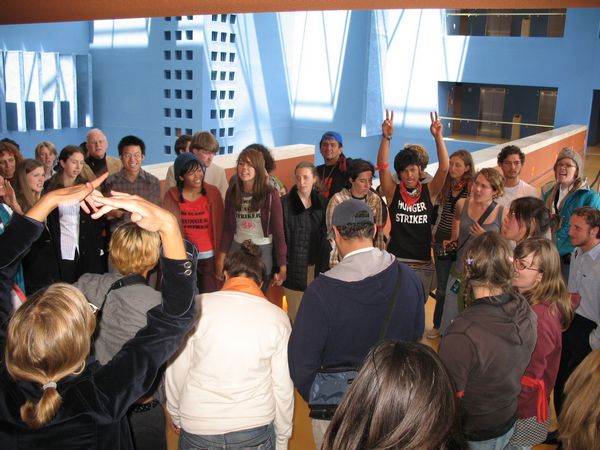 §There Were Mixed Emotions Aferward, But The Momentum Is Now Clearly On Our Side
by "no nukes" hunger striker will Sunday May 20th, 2007 10:06 PM 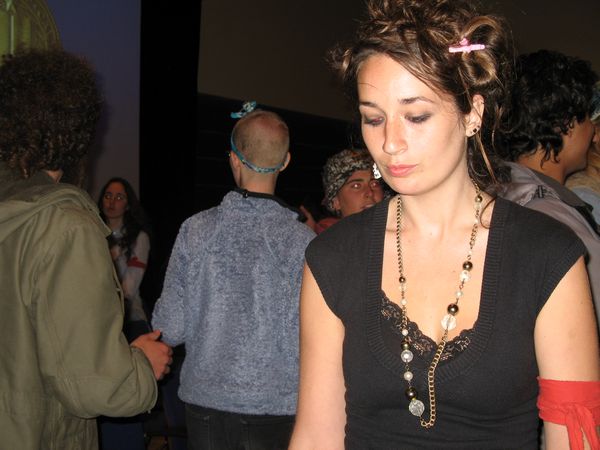