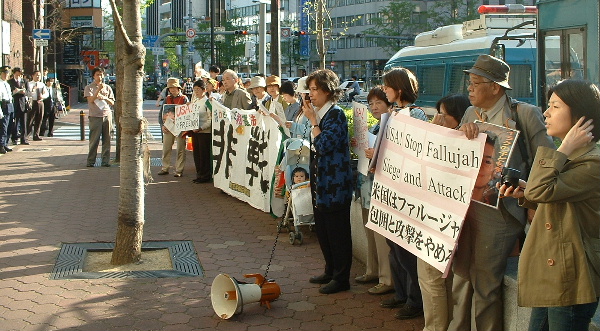 OSAKA, JAPAN — Declaring their solidarity with the people of Iraq, an estimated 30 demonstrators gathered in front of the United States consulate building here Thursday, April 15 [2004], urging the U.S. forces to stop the siege of Fallujah and withdraw all its troops from Iraq.

In the presence of security guards, police, passersby and Japanese TV news cameras, the protesters carried signs decrying the recent events in Fallujah and blasted their messages via bullhorn to the consular staff inside: "U.S. forces out of Iraq!" and "Don't kill the children of Fallujah!"

While in front of the U.S. consulate general for Osaka-Kobe, the group also circulated and signed a petition opposing the U.S. presence in Iraq, and tried to deliver the petition to U.S. President George Bush via the consulate staff.

According to one of the organizers, Aileen Mioko Smith, a longtime activist based in Kyoto, Japan, she had made contact the day before with the U.S. consulate and had arranged for a consular employee to accept the petition that day.

But as the demonstration Thursday outside the Osaka consulate wore on and attracted more attention, officials reportedly stalled and refused to come outside to accept the petition. According to Smith, the consulate staff announced that the office had suddenly "changed policy" that afternoon and would not be coming outside to receive the petition. In the end, the petition was handed over to one of the security guards stationed outside the building.

The protesters' statement condemning the killing of Iraqi civilians at the hands of U.S. soldiers was read aloud, in both English (see attached, below) and Japanese.

Smith said the protest Thursday was one of several being planned for other U.S. consular offices in Japan and the U.S. embassy in Tokyo.

She said the protests are being organized in response to a worldwide emergency appeal from Eman Ahmed Khammas, director of the International Occupation Watch Center in Baghdad.

"In Fallujah, the hospitals have been surrounded by [U.S.] soldiers forcing doctors to establish field hospitals in private homes," the appeal by Khammas reads. "Blood donors are not allowed to enter; consequently, mosques in both Baghdad and Fallujah are collecting blood for the injured. Water and electricity have been cut off for the past several days."

Khammas noted that in Sadr City, U.S. military helicopters have "fired rockets into residential areas, destroying homes. Although no curfew has officially been imposed, U.S. soldiers have made a practice of aiming tank fire on cars they find moving through the streets after dark."

"On Tuesday night alone, at least six people were killed in this way," according to Khammas. "U.S. forces continue to occupy and surround all the police stations and the Sadr municipal offices."

Japanese Prime Minister Junichiro Koizumi has since strongly criticized two of the three Japanese hostages who were released, after they reportedly said they wanted to go back into Iraq to continue to help the Iraqi people.

Officials of Japan's ruling Liberal-Democratic Party are talking about possibly billing the families of the three freed Japanese hostages for expenses incurred by the Japanese government in securing their release in Iraq.

Koizumi has said he will not withdraw the estimated 550 troops of Japan's Self-Defense Forces from Iraq, despite increasing calls in Japan to do so. U.S. Vice President Dick Cheney recently met with Koizumi in Tokyo and praised the Japanese premier for standing firm against terrorism.

TO: President George Bush and The U.S. Consular General Osaka-Kobe

As the Iraqi people resist U.S.-led occupation force escalated attacks which are terrorizing entire populations of Iraqi towns and neighborhoods, we urgently demand a stop to fighting and an immediate withdrawal of troops.

According to reports in Fallujah alone, hundreds of Iraqis have been killed and hundreds more injured since attacks began on Sunday, April 4.

Although the Geneva Convention prohibits holding civilian communities under siege, Fallujah and Adaamiya are currently under siege and surrounded by occupation forces. THIS IS IN VIOLATION OF THE GENEVA CONVENTION.

In the many towns and cities now under attack, hospitals, mosques and ambulances trying to transport the injured are being bombed and fired at by occupation forces.

The indiscriminate killing of civilians, the refusal to provide people with security, electricity, and a decent medical infrastructure appear to characterize the 'freedom' that occupation authorities have brough to Iraq.

In solidarity with Iraqi civilians facing the gruesome manifestations of the occupation, we urge the United States to:

1) Put an immediate end to the siege of Fallujah and Adaamiya. The surrounding of these cities is in contravention to the Geneva Convention;

2) Put an immediate end to the massacre of civilians in Iraqi cities and neighborhoods;

3) Give immediate access to humanitarian and medical aid organizations seeking to provide assistance to Iraqi people who are living under attack;

4) Put an immediate end to the U.S.-led occupation of Iraq. 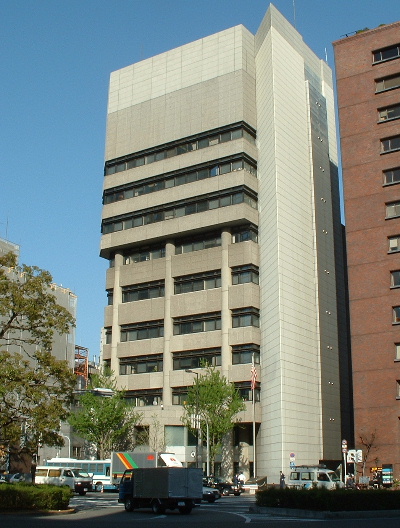 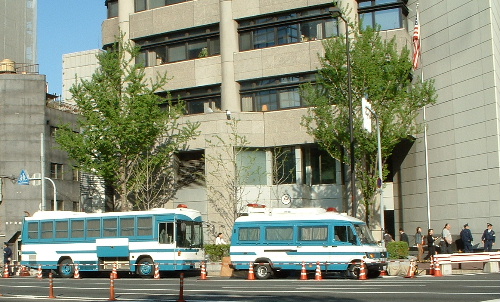 The ever-present, blue-and-white Japanese police buses parked in front of the U.S. consulate in Osaka. 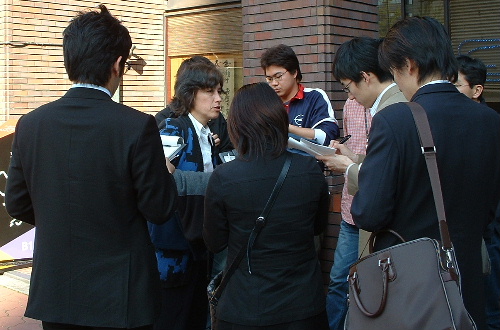 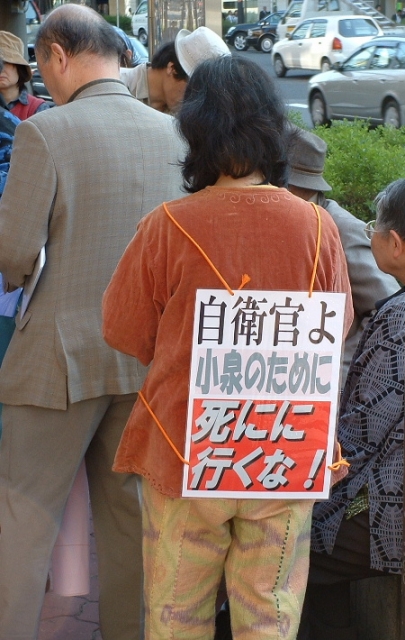 §Signmaking
by Brian Covert / Independent Journalist Saturday May 19th, 2007 3:44 AM 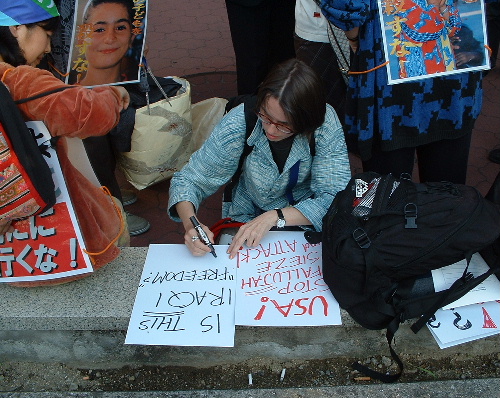 The making of signs before the protest begins. 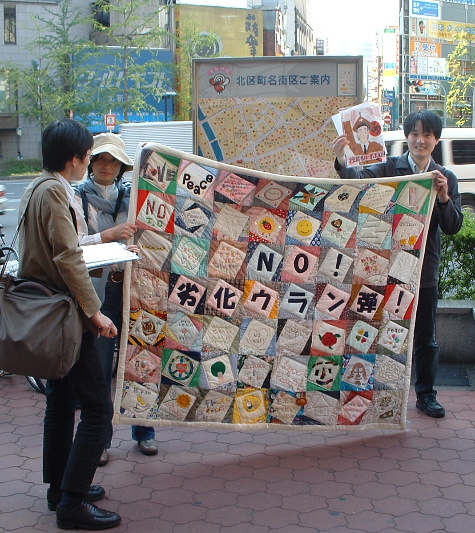 Protesters hold up a quilt with a central message that reads in Japanese: "No Depleted Uranium!" 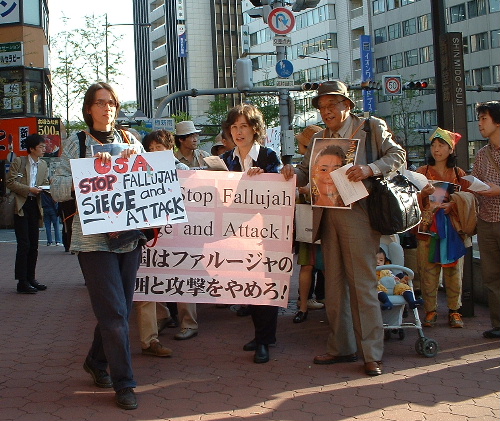 The protest action begins as demonstrators walk to the front of the U.S. consulate building in Osaka. 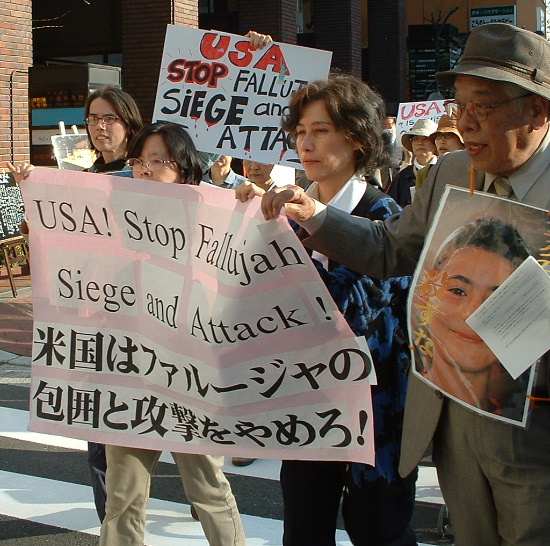 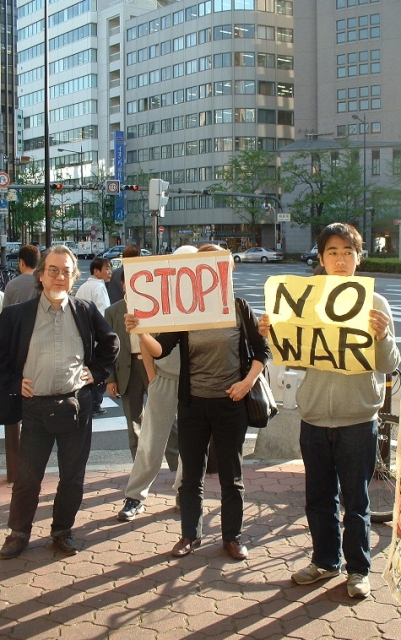 original image (475x758)
A couple of the messages displayed by protesters at the Osaka demonstration.
§"No War"
by Brian Covert / Independent Journalist Saturday May 19th, 2007 3:44 AM 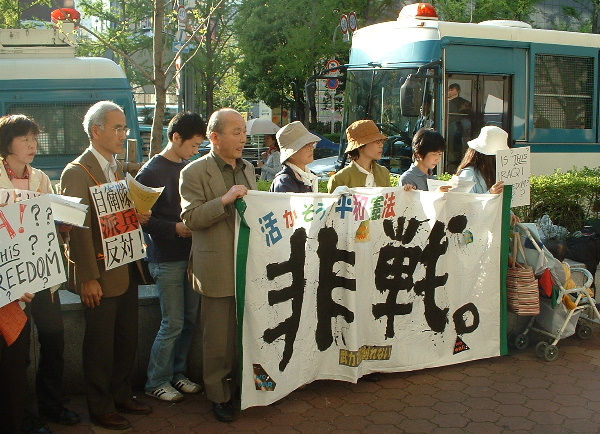 Protesters hold up a banner reading "hi-sen" (No War) with Japanese police buses behind them. 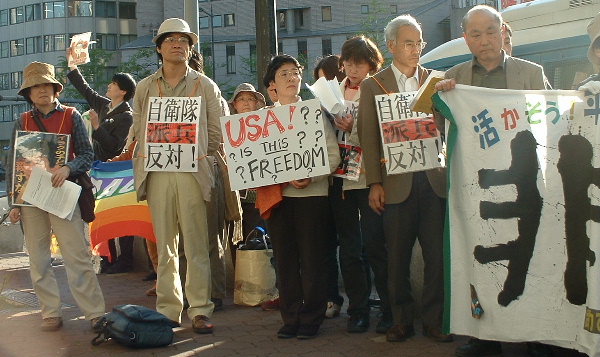 Other protesters at the U.S. consulate, and their messages to the world. 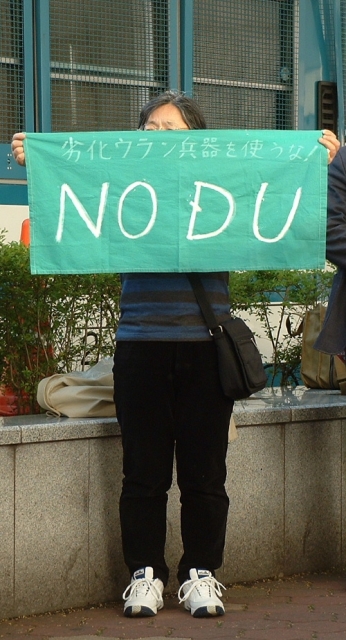 original image (500x924)
A demonstrator protesting the use of depleted uranium in Iraq. Dr. Asaf Durakovic, a scientist and specialist on the effects of depleted uranium, spoke about DU the night before to a standing-room-only crowd in Osaka, Japan. 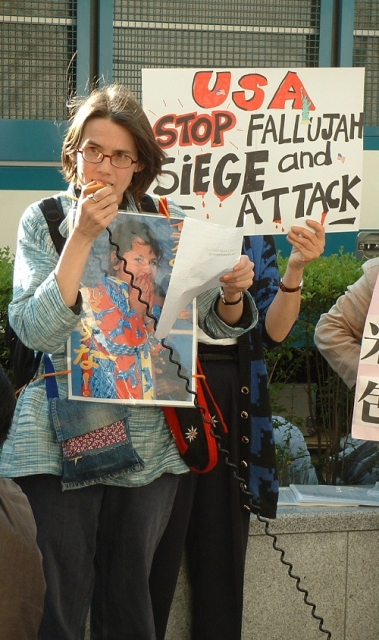 original image (500x844)
Maura Hurley, a foreign resident of Japan, calls for U.S. officials to come out of the building to receive the protesters' petition. 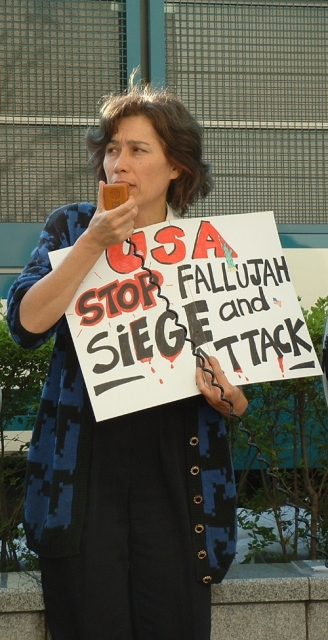 original image (500x974)
Aileen Mioko Smith, a U.S. citizen living in Japan and one of the protest organizers, said she was ashamed of her government's actions in Iraq. 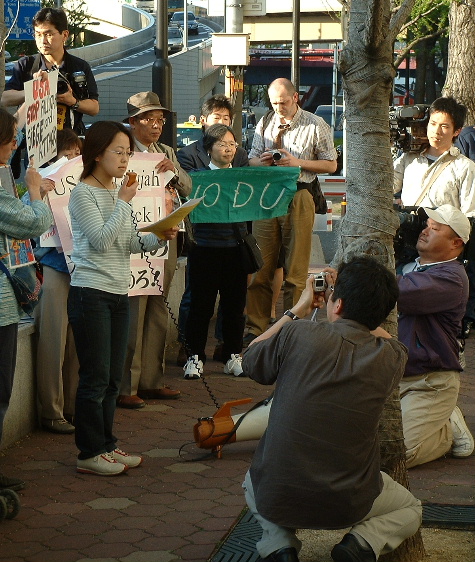 One of the younger Japanese protesters, speaking against U.S. military actions in Iraq before the cameras. 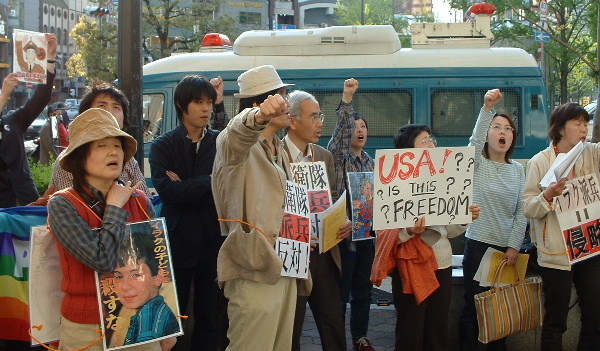 Demonstrators at the U.S. consulate in Osaka, declaring their solidarity for the people of Iraq and vowing to fight on.