by Mike Rhodes (mikerhodes [at] comcast.net)
The City of Fresno delivered three portable toilets and a dumpster to a homeless encampment on H street today. These services are expected to be a temporary solution to improve the health and sanitation in the encampment. The city plans to purchase property to set up a “free zone” where homeless people can live. The new encampment will have portable toilets, trash bins, and more. 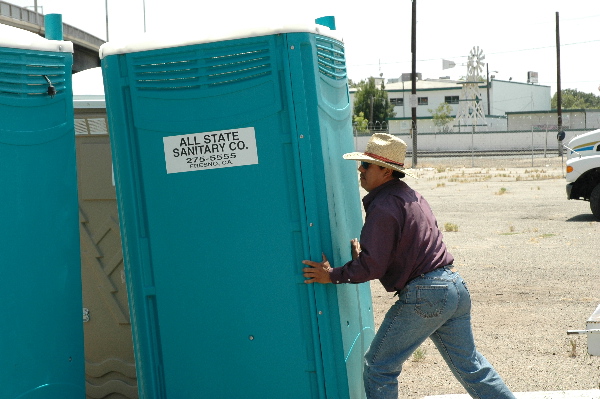 Portable Toilets, a Dumpster, and 24 Hour Security
By Mike Rhodes

About 60 homeless people, living at the H street encampment (south of Ventura), can now use a portable toilet when nature calls. They will also be able to throw their trash in a dumpster. But, there is a price to pay - Assistant City Manager Bruce Rudd announced today that it will cost the city $13,000 a month to provide these services. The biggest expense will be the 24 hour a day security subcontracted to CIS Security (they also provide security at City Hall). The Fresno City Council voted 6-1 last Tuesday ( see: http://www.indybay.org/newsitems/2007/05/15/18416812.php ) to install these services for the homeless at the H street encampment, but they see this as only a temporary measure as they work towards more permanent solutions.

Fresno mayor Alan Autry announced on April 17 that the City of Fresno, in a joint project with the County, will set up a homeless center in the downtown area. The center will provide this communities large homeless population (estimated at over 8,000) with a place to put up a tent, there will be portable toilets, trash bins, and a facility (probably a trailer) where homeless people can get information about social services like job training, employment, etc. For more information about the mayors announcement see: http://www.indybay.org/newsitems/2007/04/17/18400746.php The mayor said this “free zone” where homeless people can live will be operational by June 16, 2007. Assistant City Manager Bruce Rudd confirmed today that this plan is on schedule.

The mayor’s proposed budget for 2008 includes $4.9 million for various homeless initiatives, with $3 million being used to purchase property to create more housing for the homeless. The City of Fresno has improved its policy on how to address homeless issues. Up until about a year ago, they were bulldozing homeless encampments and destroying homeless peoples property. You can see an example of this ruthless policy here: http://www.indybay.org/newsitems/2006/08/26/18301032.php .

In October of 2006 several civil rights groups filed a lawsuit to stop the city from engaging in these vicious attacks. See: http://www.indybay.org/newsitems/2006/10/17/18321050.php . In November a federal judge issued a preliminary injunction stopping the city from taking and immediately destroying homeless peoples property. See: http://www.indybay.org/newsitems/2006/11/23/18332519.php .

Today’s installation of portable toilets and a trash bin to help the homeless is seen by some homeless advocates as evidence that the city is moving in the right direction. City policy no longer has the sanitation department bulldozing homeless encampments, they are now helping to clean up the area around the encampments, and today they have started to provide toilets and trash bins.

Yes, it is a waste of money to hire 24 hour security to monitor the portable toilets. It is insulting to suggest that homeless people can’t go to the bathroom with out a security guard keeping watch. But, when you compare this to the city’s policy a year ago, it is easy to see that progress is being made. 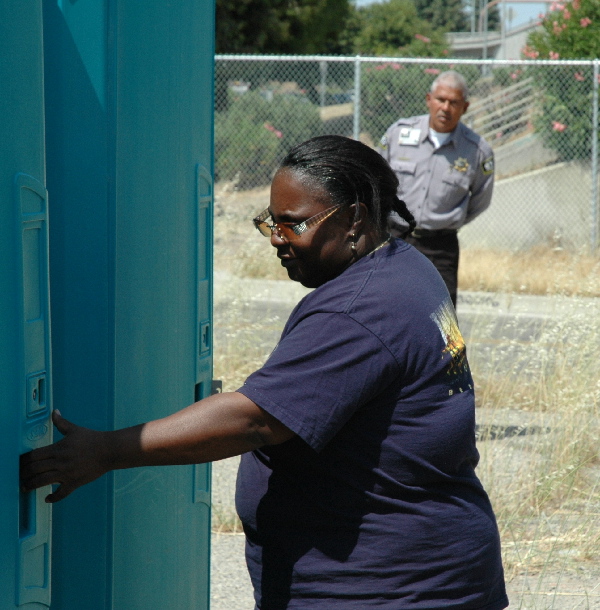 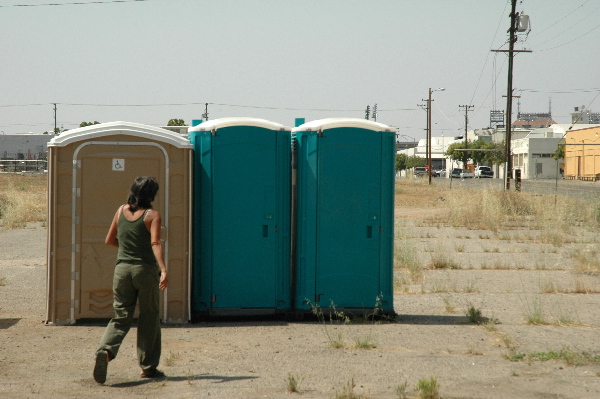 Another homeless person heads for the portable toilets.
§Bruce Rudd
by Mike Rhodes 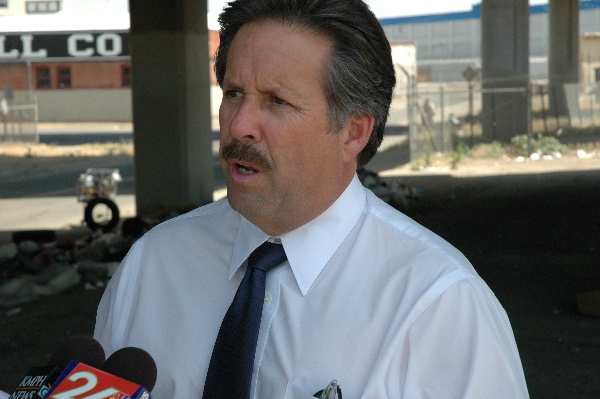 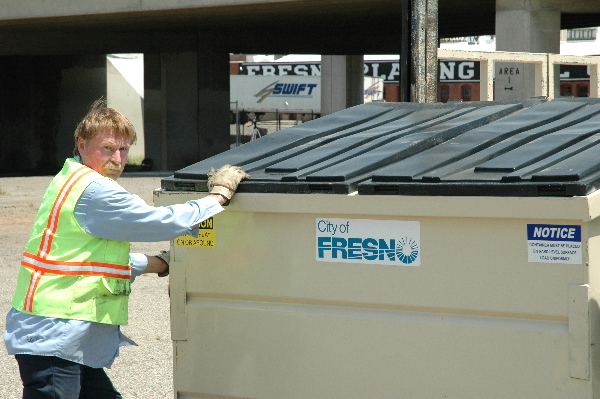 The City of Fresno delivered this trash bin to the homeless encampment on H street today. All photos by Mike Rhodes
Add Your Comments
Comments (Hide Comments)
§Gloria H/ Fresno
by Gloria Hernandez
Great work. I wonder if someone provided sensitivity training to the security guards? With over 1,000 cops in town and we taxpayers have to pay extra for security? Aren't the homeless entitled to the "same" protection as the rest of us?

O wait did I say protection? I meant to say profiling. see demografics on fresno police website and note that Blacks get stopped at almost three times their population.

I note for the record that there were less calls for services for the area where the homeless live than in central fresno where I live.

and the beatings go on and on...

peace Gloria h/fresno
Add a Comment
§dontgiveashitt
by dontgiveashitt
see this story i think city feel guilty for there wrong doing http://www.indybay.org/newsitems/2007/08/18/18441458.php?show_comments=1#18442371
Pamela Kincaid was the lead named plaintiff in the lawsuit filed by the homeless against the City of Fresno, because the city was taking and immediately destroying their property. This sometimes included their IDs, clothing, tools, kittens, and in one case the urn containing the ashes of a grandchild. Pam stood up against this injustice and was willing to put herself on the line to protect the rights of all homeless people in this community.

END_OF_DOCUMENT_TOKEN_TO_BE_REPLACED
Add a Comment
Support Independent Media
We are 100% volunteer and depend on your participation to sustain our efforts!