Add an Event
Newswire
Calendar
Features
Home
Donate
From the Open-Publishing Calendar
From the Open-Publishing Newswire
Indybay Feature
Publish to Newswire
Add an Event
Related Categories: International | Global Justice & Anti-Capitalism
San Francisco Supports the Iraqi Oil Workers!
by Ben Terrall & Bill Carpenter (bterrall [at] igc.org)
Tuesday May 15th, 2007 4:04 PM
And the Petrochemical Oil Bill before the Iraqi Parliament is exposed as one of the worst examples of neocolonialism yet! Three-minute QT movie. 48MB.
Copy the code below to embed this movie into a web page:
Download Video (48.1MB) | Embed Video
The Iraqi Oil Workers and the Petrochemical Oil Bill

In ongoing negotiations between Congress and President Bush about continued funding of the Iraq war, the President late last week began to make accommodating statements about negotiating on "benchmarks" for the Iraqi government.

On May 10, the New York Times reported:

After a briefing at the Pentagon, Mr. Bush said he had instructed Joshua B. Bolten, the White House chief of staff, to reach "common ground" with lawmakers of both parties over setting firm goals, or benchmarks, to measure progress in Iraq. Mr. Bush had previously insisted that he wanted about $95 billion for the military with no strings attached.

"It makes sense to have benchmarks as a part of our discussion on how to go forward," Mr. Bush said, even as he threatened to veto the House plan, approved on a 221-to-205 vote Thursday night, which would require him to seek approval in two months for the balance of the war money.

But these benchmarks are hardly a compromise for the Bush Administration, and the Times, along with most other U.S. news outlets, continue to ignore one of most important of the criteria being used to judge Iraq's "progress": legislation imported from the U.S. that threatens to give most of Iraq's oil to Western oil giants.

Antonia Juhasz, analyst for Oil Change International and author of The Bu$h Agenda: Invading the World One Economy at a Time notes, "What this law does is open up at a minimum, two thirds of Iraq's oil to private, foreign, corporate investment on terms that are literally the most generous available, just about anywhere in the world. Generous to the oil companies, that is. The foreign oil companies do not need to transfer any technology. They don't need to share any of their skills. They don't need to train Iraqi workers, and they don't need to invest any of their money in Iraq."

Though some observers argue that given the instability in Iraq, extracting oil without significant sabotage and resistance damaging operations will be unlikely, Juhasz points out, "If the law passes first of all it offers [the oil companies] as long as 35-year contracts. In addition, the law gives the companies two years within which they could sign the contract but then not even get to work."

Raed Jarrar, Iraq consultant of the American Friends Service Committee [http://www.afsc.org/] and author of the widely-read "raed in the middle" blog [http://raedinthemiddle.blogspot.com/], commented, "The new oil law is a direct intervention in Iraq's domestic policies. It will result in nothing more than increasing the Iraqi-Iraqi imposed violence, and the Iraqi occupation fight. The best oil law is the law that the Iraqis will choose after the last U.S. soldier leaves."

The Iraqi Federation of Oil Unions recently announced to the Iraqi government its decision to strike on Monday, May 14th to demonstrate strong opposition to the law now before the Iraqi parliament.

Federation President Hassan Jumaa Awad al Assadi said: 'The oil law does not represent the aspirations of the Iraqi people. It will let the foreign oil companies into the oil sector and enact privatization under so-called production sharing agreements. The federation calls for not passing the oil law, because it does not serve the interests of the Iraqi people."

The Union is joined in its condemnation of the pending law by all of Iraq's other trade unions, a number of political parties, and over 60 senior Iraqi oil experts.

In announcing a San Francisco demonstration (organized on very short notice) in solidarity with the oil workers, National Coordinator of U.S. Labor Against the War Michael Eisenscher wrote, "The Congress is being sold the idea that Iraq's adoption of the oil law will assure equitable distribution of the oil revenues, but what they are not being told (or refuse to acknowledge) is that the law has one sentence about equitable distribution, but page after page about how foreign oil companies can secure contracts to control the 2/3 of Iraq's oil that is yet to be developed and retain that control for a generation or more. To the extent there is equitable distribution, it will be only of the profits that are left after Big Oil takes their cut. The Bush administration and IMF are pressing Iraq to adopt this law. It is shameful for the Congress to become partners in shoving a law that was conceived by, drafted for, and will benefit only the rapacious oil corporations down the throats of the Iraqi people."

Speaking at the demonstration of veteran labor and anti-war activists in front of the San Francisco Federal Building, Eisenscher, added: "This law is unprecedented in the Middle East. Since the beginning of the war we've seen the looting of Iraq's antiquities. This is a second looting. Iraq's oil is the cheapest to extract in the world, hence it is the world's most profitable supply of oil."

Eisenscher concluded, "It is unjust and immoral for the U.S. to stay there one more day."

Clarence Thomas, a long-time activist with local 10 of the International Longshore and Warehouse Union, spoke about his respect for oil workers he met on a labor delegation to Iraq. Thomas recalled that in 2003, one of the major concerns of Iraqi workers he spoke to was privatization, and told the assembled protestors, "this is an example of corpocracy, an alliance of banks, corporations and government promoting the interests of American oil companies." Thomas saluted the militancy and resilience of the workers, and noted oil worker pay was so low their children were selling gasoline on the sides of highways.

Before the group of thirty or so activists posed for a photo to send to the strikers in Iraq, writer Ted Nace, author of the book Gangs of America: The Rise of Corporate Power and the Disabling of Democracy, took the microphone. Nace, who maintains a website focused on the law , stressed the long history of U.S. foreign policy shafting the Iraqi people, from Washington's 1980's support for Saddam Hussein, to the first gulf war and the subsequent sanctions regime which killed more than a million Iraqis. Nace explained, "What we're doing by publicizing the law is buying time to slow down the passage of this law in the Iraqi parliament. We have to continue to get the word out. Democrats like Ted Kennedy still say this is about revenue sharing -- absolutely not! This law has no redeeming features."

The protest then formed a picket line which marched in a circle in front of the entrance to the Federal Building and chanted demands that Speaker of the House and San Francisco Congresswoman Nancy Pelosi stop supporting the oil law.

On a related front, last week a majority of Iraqi parliamentarians rejected the continued occupation of their country by signing a legislative petition calling on the U.S. to set a timetable for withdrawal. This has long been the sentiment of the majority of Iraqis: In September 2006, a World Public Opinion poll found that 71% of Iraqis wanted the Iraqi government to ask for U.S.-led forces to be withdrawn within a year or less. The emerging nationalist bloc behind the anti-occupation parliamentary vote is also opposed to the U.S. setting up permanent bases or privatizing Iraq's oil.

Beyond the futility of armed force, and ultimately more important, is the fact that war in our time inevitably results in the indiscriminate killing of large numbers of people. To put it more bluntly, war is terrorism. That is why a "war on terrorism" is a contradiction in terms. - Howard Zinn 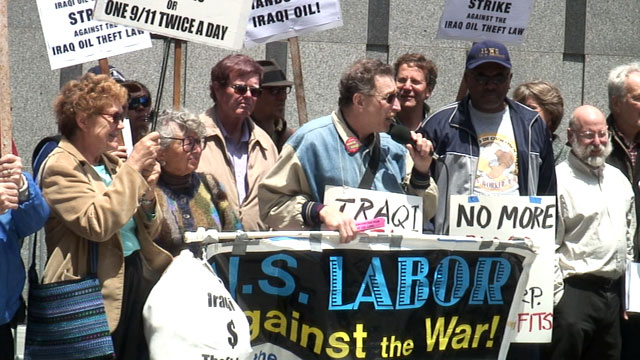 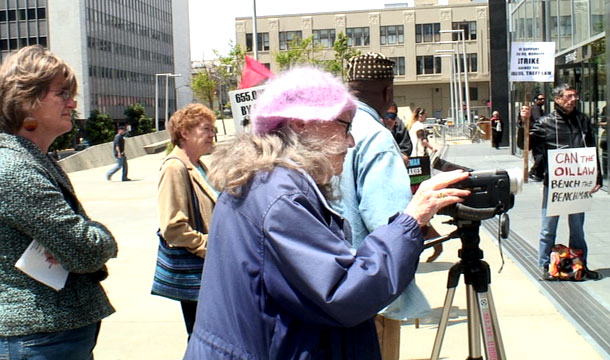 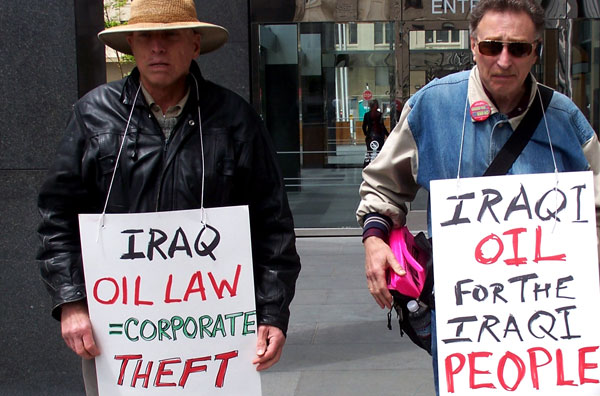 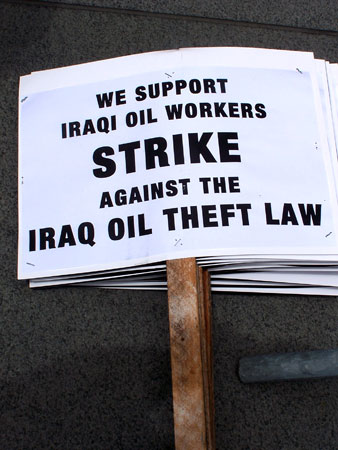 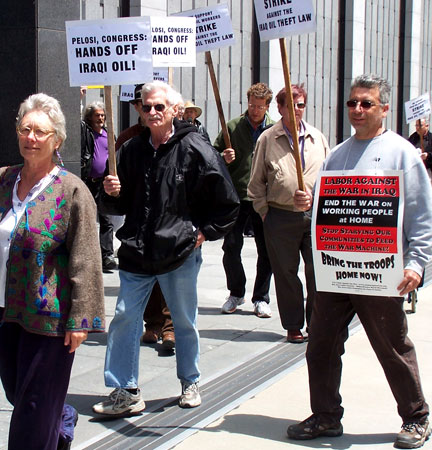 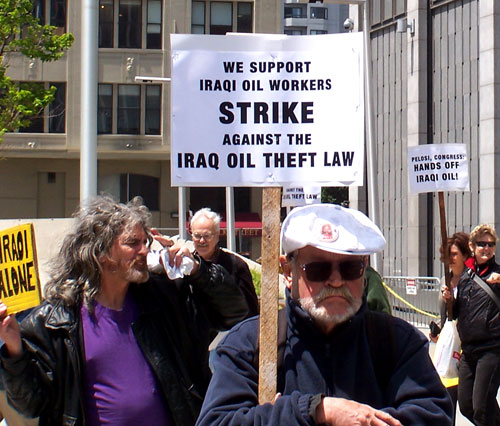 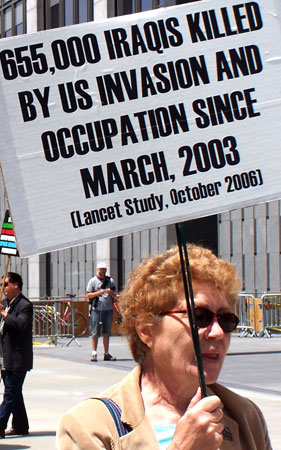 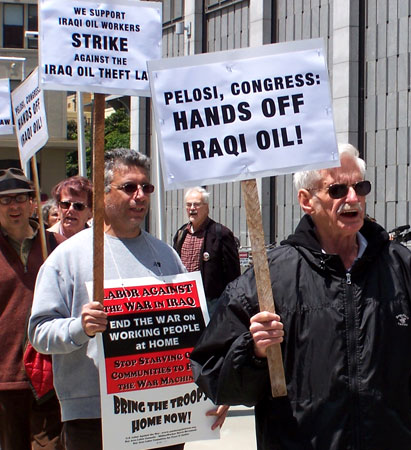 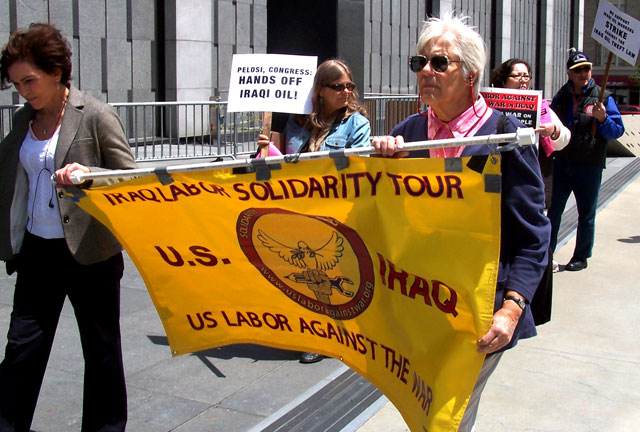 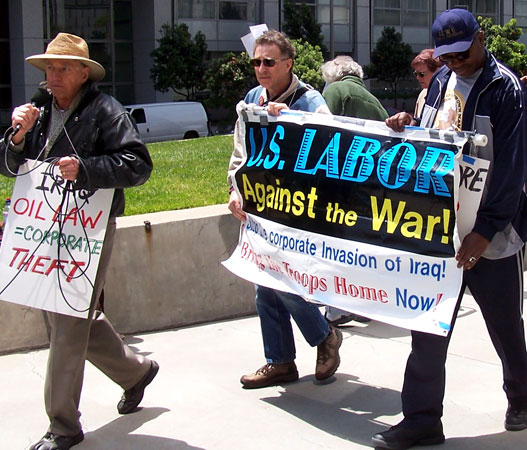 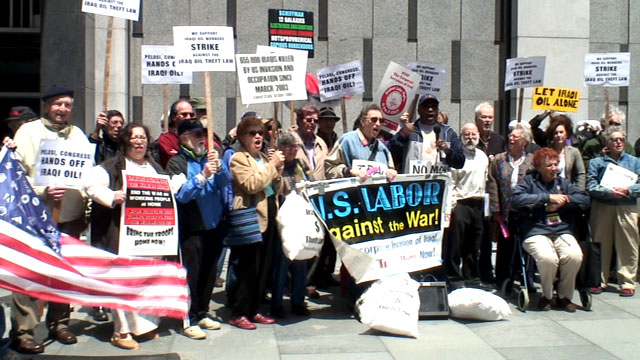