Add an Event
Newswire
Calendar
Features
Home
Donate
From the Open-Publishing Calendar
From the Open-Publishing Newswire
Indybay Feature
Publish to Newswire
Add an Event
Related Categories: Peninsula | South Bay | Immigrant Rights
Golden Gate Minutemen on the Streets/Raging Grannies Sound the Alert
by Granny Ruth
Monday May 14th, 2007 10:47 PM
A newly formed branch of the Minutemen, joined by other anti-immigration groups, are targeting San Francisco Peninsula and South Bay cities bringing their message to the streets. What they didn't count on was this: a group of middle aged and elderly woman called the Raging Grannies with signature flowered bonnets are sounding the alarm to local community activists to react quickly in response. Calling on peace and immigrant rights groups to counter demonstrate on short notice, the Peninsula Raging Grannies Action Leauge set up a quick response team to get the word out that, "our street corners ARE our communities; our communities will NOT be divided along lines of immigrant vs. citizen." 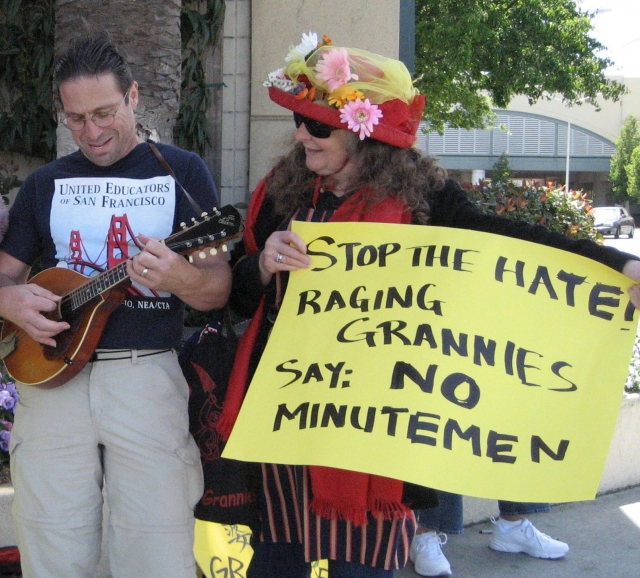 
The Minutemen are focusing on February, 2007 ICE (Immigration and Customs Enforcement) raids in Redwood City and elsewhere in the bay area, and carry signs with slogans like "Nice Job ICE". Recently they waved the banner of patriotism to gain converts to their side, planting dozens of American flags on street corners in San Mateo, Redwood City, and Campbell, CA at demonstrations supporting deportation of immigrants and stricter border control. They also are demanding the release of two border agents currently serving prison time for shooting immigrants at a US-Mexico border crossing.

Until recently the Raging Grannies Action League Racial Intolerance Response Team has gone after the fact to sites where anti-immigrant demonstrations have been held. The Grannies perform a symbolic clean-up of what they call the "contaminated" area. Using mops and brooms, and dressed in cleaning clothes, they send their own message that "hate will not be tolerated in our community". At times they have employed the services of a spiritual healer to rid the street corners of bad karma. But with improved internet skills, these activist women from their 50's with some into their 90's are able to call the alert to other groups who can come out on short notice and counter the Minutemen face-to-face. Amongst the organizations that have responded by sending participants to the Raging Grannies' counter-protests are youth groups such as Lucha (Community College Latino students), Maiz (young Latino activists), and Revoluntionary Youth (a multi-racial group working for an end to the Iraq War and for immigrant rights). Veterans for Peace members show up in fatigues and the largest peace group in the San Jose area, South Bay Mobilization, contributes signs saying "No a la Guerra: Contra Irak, Contra Iran, Contra los Immigrantes". The Raging Grannies show up too, with a washtub made into a bass instrument that plunks along while the Grannies sing songs in Spanish and English they have written to honor immigrant labor and contributions to America.

http://www.indybay.org/newsitems/2006/09/04/18305981.php
Labor Day 2006 "Clean Up the Hate" response to anti-immigrant demonstration (San Jose)
http://www.RagingGrannies.com
Add Your Comments
LATEST COMMENTS ABOUT THIS ARTICLE
Listed below are the latest comments about this post.
These comments are submitted anonymously by website visitors.