Add an Event
Newswire
Calendar
Features
Home
Donate
From the Open-Publishing Calendar
From the Open-Publishing Newswire
Indybay Feature
Publish to Newswire
Add an Event
Related Categories: Americas | International
US Terrorism & Terrorists...
by posted by F Espinoza
Monday May 14th, 2007 12:25 PM
Both Posada and the U.S. government are trying to disqualify potentially damaging evidence from his trial... 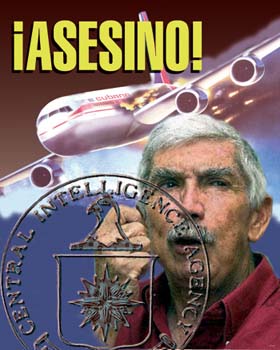 Transcript of a broadcast of:

The anti-Castro Cuban militant and former CIA operative Luis Posada Carriles is set to stand trial in El Paso, Texas later this week. Posada is linked to a series of deadly attacks, including the 1976 bombing of a Cuban airliner that killed 73 people. But in a move decried around the world, Posada will not be standing trial for terrorism. Instead, immigration charges – accused of lying to U.S. authorities when he came into the country two years ago. The Bush administration has refused to extradite Posada to Cuba or Venezuela, saying he would face torture.
There are several new developments in Posada's case. Authorities have filed documents showing the FBI believes Posada plotted a series of deadly bombings in Cuba in the 1990s. Meanwhile both Posada and the U.S. government are trying to disqualify potentially damaging evidence from his trial. Defense attorneys have filed a motion to omit Posada's statements from a 2006 interview with immigration officials. For their part, government prosecutors have filed a motion to effectively bar Posada from discussing his ties with the CIA.
Former President George H.W. Bush headed the CIA at the time of the October 1976 bombing of the Cuban airliner that killed 73 people. These developments come as the public-interest documentation center the National Security Archive has released new information further linking Posada to that attack. For more we go to Washington, D.C. where I'm joined by Peter Kornbluh. He is a senior analyst at the National Security Archive where he directs the Cuba and Chile Documentation Projects.


The Nation: Terror and the Counterterrorists (*)

26 April 2007, New York, NY – Today The Nation Magazine released its first-ever special issue devoted to the future of Cuba. With Cuba and the media buzzing about the possible return of Fidel Castro next week to the public stage, what now?
The Nation and guest editor Peter Kornbluh writes in this issue:
"Perhaps more than any other nation over the past fifty years, Cuba has consistently faced both threatened and real assassination attempts, sabotage efforts, armed attacks and bombings, infamous among them the midair destruction of a Cubana passenger plane in 1976.

Yet even in the post-9/11 world, US soil continues to be used for such purposes.

In fact, the Five are better understood as counterterrorism agents whose goal was to protect Cubans and other innocent victims from the violence of committed terrorists like Luis Posada. The Bush Administration's handling of these two historically inseparable cases is a reminder that, when it comes to Cuba, US policy-makers refuse to recognize the difference between those who commit acts of terror and those seeking to counter them."

On November 17, 2000, shortly after arriving in Panama City for a summit of Ibero-American leaders, Fidel Castro held a press conference to announce that the legendary Cuban exile terrorist Luis Posada Carriles had also come to Panama--on an assassination mission. The Cuban authorities subsequently supplied a video of Posada and three co-conspirators meeting in front of their hotel. Within forty-eight hours Panamanian officials located a gym bag containing thirty-three pounds of C4 explosives that Posada apparently had planned to use to blow up the auditorium where Castro was scheduled to speak.
How did the Castro government know of Posada's plot? Cuban intelligence, known as the DGI, had a high-level mole in one of the exile groups reporting on the assassination operation as it evolved. The Cuban spy program potentially saved dozens of lives and averted an act of international terrorism.
Perhaps more than any other nation over the past fifty years, Cuba has consistently faced both threatened and real assassination attempts, sabotage efforts, armed attacks and bombings, infamous among them the midair destruction of a Cubana passenger plane in 1976. (CIA and FBI documents implicate Posada, who was once paid by the agency as a demolitions trainer, as the mastermind of that attack.) Long after the CIA abandoned its direct efforts to overthrow the Castro regime and terminate its leadership, militant anti-Castro groups continued their campaign of violence. After viewing a 1977 CBS special titled The CIA's Secret Army, on violent Cuban exile operations in Florida, President Jimmy Carter was, according to a recently declassified White House memorandum, "appalled at the idea that people could use US territory as a base for terrorist actions."
Yet even in the post-9/11 world, US soil continues to be used for such purposes. As recently as November 2005, Posada's leading financial benefactor in Miami, Santiago Alvarez, was caught with a military-grade arsenal of machine guns, grenades, silencers, explosives and thousands of rounds of ammunition--leading to speculation that violent exiles were planning another major operation against Cuba.
Just as the CIA escalated its efforts to penetrate Al Qaeda after 9/11, the DGI has devoted considerable resources to infiltrating hard-line anti-Castro organizations in Miami and monitoring the activities of Alvarez and other exile leaders with a track record of violence. In the mid-1990s Cuba sent more than a dozen operatives to Florida to establish a spy ring code-named the Red de Obispos--the Wasp Network. Most of the agents were assigned to penetrate groups such as the Cuban American National Foundation, Brothers to the Rescue and Alpha 66; one, Antonio Guerrero, was hired on as a sheet metal worker at the Boca Chica air base, where he took notes on the types of military aircraft landing and taking off and monitored the level of activity on the base.
In September 1998, the FBI moved in. Five agents--Guerrero, Fernando González, Gerardo Hernández, René González and Ramon Labañino--now known as the Cuban Five--were detained, thrown into solitary confinement for seventeen months, prosecuted for conspiracy to commit espionage (as there was no evidence they had gathered any classified US information) and given maximum sentences ranging from fifteen years to double life in prison. When a three-judge panel of the Eleventh Circuit Court of Appeals threw out their convictions in August 2005, issuing a unanimous decision that the Five had not received a fair trial, Attorney General Alberto Gonzales's office immediately appealed to the full Circuit Court to revisit the ruling.
Gonzales's concerted effort to keep the five Cuban spies in prison stands in sharp contrast to his inaction on keeping Posada behind bars. After being pardoned in Panama in August 2004, Posada snuck into the United States in March 2005 and requested political asylum; he was detained only after publicity on his terrorist background--much of it generated by declassified CIA and FBI documents posted on the website of my organization, the National Security Archive--threatened to undermine the Bush Administration's credibility in the "war on terror." But Gonzales has refused to certify Posada as a terrorist under the provisions of the Patriot Act--certification that would allow the government to detain him indefinitely. Instead, the Justice Department has treated Posada as just another illegal immigrant, charging him only with lying about how he arrived in the country.
With Posada indicted only on immigration fraud, his lawyers have, not surprisingly, convinced three different courts that he should be released. On April 19, he posted $350,000 in bail and returned to Miami. The man that the same Justice Department has described in court filings as "an unrepentant criminal and admitted mastermind of terrorist plots" will now live comfortably under house arrest until his trial, scheduled for May 11.
In Cuba, freeing the Five and keeping Posada in prison have become cause célèbres. The first thing travelers see upon arrival at José Martí International Airport outside Havana is a huge placard featuring photographs of the "heroes of the Republic of Cuba" and demanding "Freedom for the Cuban Five"; similar signs line the corridors of major hotels. Huge public rallies have been held to call for justice for Posada's many victims and to denounce US hypocrisy for releasing him to his wife's Miami home. Fidel Castro emerged from his convalescence to accuse the Bush Administration of freeing "a monster." The Five are frequently referred to as presos políticos--political prisoners.
In fact, the Five are better understood as counterterrorism agents whose goal was to protect Cubans and other innocent victims from the violence of committed terrorists like Luis Posada. The Bush Administration's handling of these two historically inseparable cases is a reminder that, when it comes to Cuba, US policy-makers refuse to recognize the difference between those who commit acts of terror and those seeking to counter them.


"The Man of Two Havanas": Max Lesnik on His Transition From Cuban Revolutionary to Exile to Target of Terrorist Attacks by Anti-Castro Cuban Militants in Miami

Transcript of a broadcast of:

“The Man of Two Havanas” is a new documentary about Max Lesnik. Lesnik was a close friend of Fidel Castro's who was exiled to the U.S. following a public disagreement over Cuba's ties to the Soviet Union. But instead of joining Castro's right-wing Cuban-American opponents, Lesnik became an outspoken critic of the U.S. embargo and covert warfare to bring down the Cuban government. For his views he was the target of several attacks that nearly cost him his life. In a moment we'll hear from Max Lesnick and his daughter Vivien Lesnik Weisman, director of the “The Man of Two Havanas.” But first, a preview of the film.

* The Man of Two Havanas 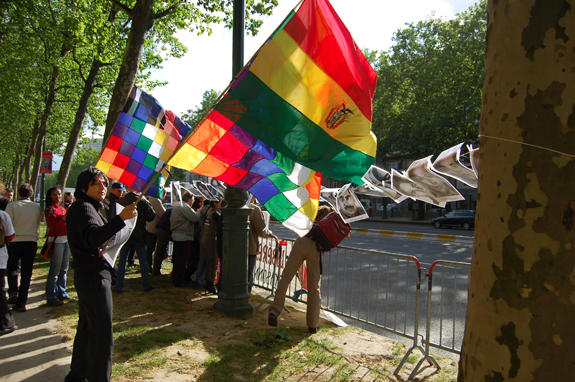 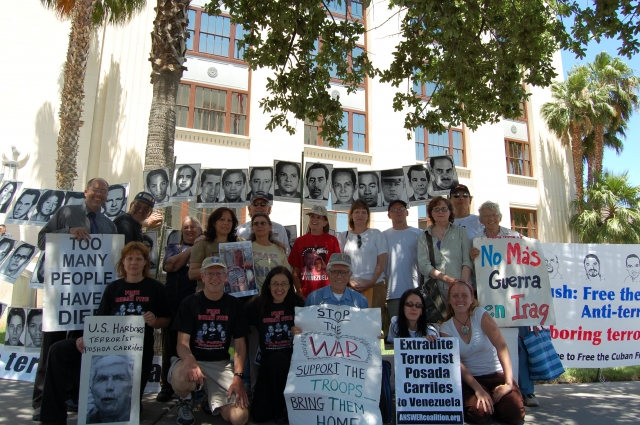 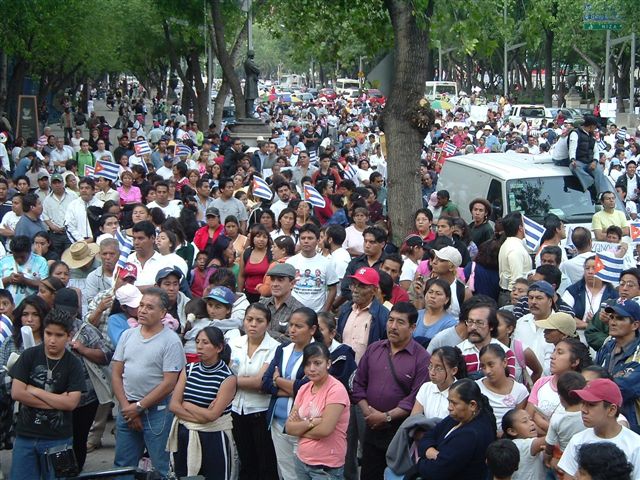