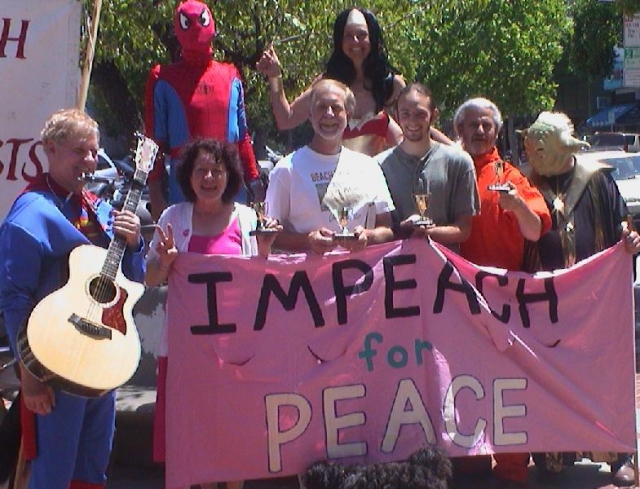 The Superheroes were the first to arrive at Lytton Plaza in downtown Palo Alto yesterday, incognito, setting up banners and tables, and doing the “work” to prepare for the 1:00 p.m. rally. Annie and one Veteran for Peace, George Johnson, opened the rally with their new “Impeachment” song, followed by the Raging Grannies. August Bullock, dressed as Superman, sang the “Heroes of America” song that inspired the theme for this fourth monthly impeachment rally.

Brad Newsham, who organized the Beach Impeach event in January and the National Impeachment Day on April 28--which drew 1500 people to spell out “Impeach Now!” and “Peace Now!”--was the first to receive an award, after which he spoke about the trials and tribulations of his many months of effort--the vision, the hopes, the setbacks, and the spreading ripple of impact that has strengthened the Impeachment movement. A devoted dad, he had to leave early to pick up his daughter from school.

Cynthia Papermaster, of Code Pink, the tireless organizer of impeachment rallies at Pelosi’s mansion and office, who has tried to put impeachment “on the table,” received the second award.

Carol Wolman, a psychologist and write-in candidate for Congress on an Impeachment platform in 2006, as well as a moving force behind www.impeachbush-cheny.com who has helped organize many rallies and events, received the third award in absentia. Carol was represented by her talented husband and son, Bob and Jacob Clapsaddle, who filmed the event. (Jacob recently produced the impeachment documentary “High Crimes and Atrocities,” as well.) Jacob read the following statement from Carol:

In these trying times, we are all called on to be heroes, to extend our citizenship beyond the voting booth. We are blessed with a Constitution which gives sovereignty, ultimate rule, to "We the People." As citizens, we need to uphold and defend the Constitution against the greatest enemies--they happen to be domestic enemies-- we have ever known. Our Constitution makes us free; our liberties are being chipped away; it's up to us to preserve them.

To quote some other American heroes:

They who would give up an essential liberty for temporary security, deserve neither liberty or security.

John Adams:
There is danger from all men. The only maxim of a free government ought to be to trust no man living with power to endanger the public liberty.

Edward R. Murrow:
We cannot defend freedom abroad by deserting it at home.

Florynce Kennedy:
Freedom is like taking a bath -- you have to keep doing it every day!

Wendell Phillips:
Eternal vigilance is the price of liberty.

Patrick Henry:
Is life so dear or peace so sweet as to be purchased at the price of chains and slavery? Forbid it, Almighty God! I know not what course others may take, but as for me, give me liberty, or give me death!...”

Don Spark, a devoted activist and moving force within the SF Bay World Can’t Wait chapter, who has worked in coalition with many other groups to put on rallies and events to change the direction of the country and educate the public, received the next award and made this statement:

We must bring this to a halt. We are the ones standing up to this. We are the heroes. We say no. We are fighting back. We are spending all our money, time and spirit...and that is good for us...and you know it...and we have to figure out how to communicate that better to everyone in America...to popularize this heroism and resistance. Being a hero is so groovy and fantastic, I feel guilty for the amount of joy and confidence it's given me to be committed to fighting to drive out the Bush regime!

My story and accomplishments are important only because the American people have failed to stand up against the most dangerous force on the planet, the Bush Regime. Therefore, it is completely the responsibility of those of us who see it - and know what needs to happen - to break the spell and transform millions more Americans into heroes. We need to project heroes, heroism and our bold accomplishments. Because, if we fail to adequately grow the resistance of people like Carol Brouillet and all of you - if we fail to convince others to do the same, America will experience horrors beyond what most of us have ever imagined. It began on the gulf coast. The largest mercenary army on earth, Blackwater, was on the New Orleans security plan. They made New Orleans like the Baghdad of today. And Blackwater is making police and security business deals with state governments all over this country...including building very large facilities in California.

There are very few of us heroes...and America is continuing on the fascist trajectory laid out by the Bush regime. The longer this goes on, the more entrenched and irrevocable the Bush program becomes ... the Bush program of fascism, war crimes and crimes against humanity. This cannot be allowed to continue through the end of Bush's term or it will be made permanent legally and in this society and culture. We are all here today to act now, because the future is in the balance. War, torture, Katrina, theocracy, and lies upon lies upon lies....

But before I understood that, it was clear to me that the most dangerous force on earth had been unleashed on 9/11. At the time I did not believe anything could be done about it, but I felt that life would be meaningless unless I tried anyway. In the winter of 2001, I joined you heroes. In the summer of 2005, the “World Can’t Wait - Drive Out the Bush Regime!” was formed. I quit my job and began giving it everything I had based on the founding document and basis of unity of The World Can’t Wait. It's one page long, written before Katrina….

The actions of Congress and the federal government led by the Bush regime in New Orleans and all over the Gulf Coast in the aftermath of Katrina look like mass murder and ethnic cleansing. That is a crime against humanity! Investigate. Indict. Prosecute and convict.

And now, The Call to Drive Out the Bush Regime...

By the time Don finished his speech, people were ready to march. There were lots of banners and signs, and fliers to pass out. Many passers-by didn’t know anything about the Impeachment movement, or that Dennis Kucinich has introduced articles of impeachment against Dick Cheney. They didn’t know that only co-opted people within the Peace Movement would support bills that supposedly provide a timetable for withdrawal while actually giving money for war, instead of supporting impeachment and a genuine change of direction.

The dedicated activists who marched did so to educate the public, and to get “Impeachment” into the press and the national dialogue. Superman sang his song again, as he and Wonder Woman distributed the banners, signs, and flyers. The group began marching slowly down University Avenue, singing, chanting, and explaining their purpose as they marched along. Superman invented a new song, “It’s time to impeach the President,” including the following lively refrains from the group: “and Dick Cheney too!” “and Condoleezza Rice!” “and Gonzalez!” “and Donald Rumsfeld!” “and Karl Rove!” People loved the procession and interacted with the many costumed characters, including Yoda, Spiderman, and a hooded prisoner from Abu Ghraib. Sometimes people joined the march and even sing a verse or two of our song with us. The Palo Alto Weekly and the Palo Alto Daily News sent photographers, and numerous other photographers couldn’t resist photographing the show as well.

Eventually, well past 3:00 p.m., those brave enough to risk a parking ticket finally reached Anna Eshoo’s office to sing our message, loudly and clearly several times, before visiting the staff, signing in, and conveying to Congresswoman Eshoo our request that she support Kucinich’s Impeachment bill, HR 333. 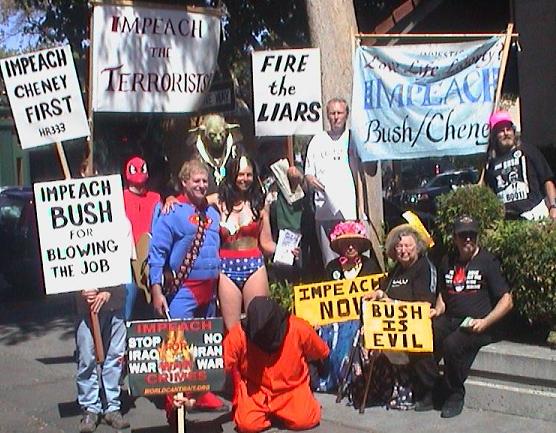 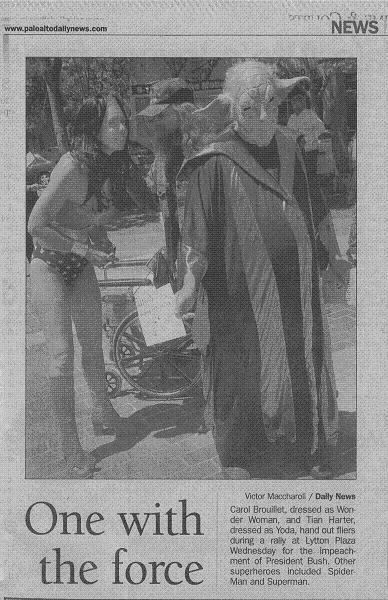 Yoda and Wonder Woman at the impeachment rally, passing out fliers.
§Posters for the Impeachment Rally
by Carol Brouillet Thursday May 10th, 2007 9:00 PM 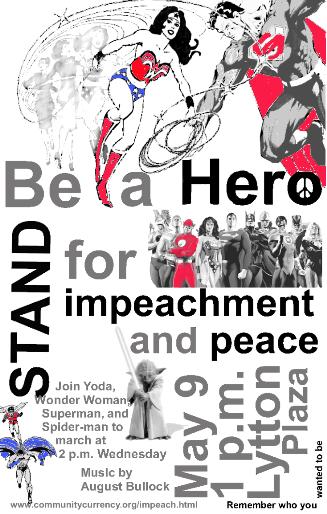 The last minute posters that went up before the rally.
§Fliers that were given to the public
by Carol Brouillet Thursday May 10th, 2007 9:00 PM 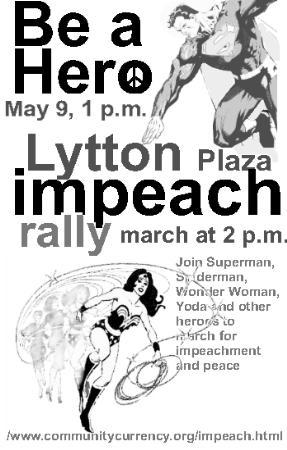 Here is the text:

For lying about Iraq, for attacks on civilians, for crooked-crony war contracts.......impeach for EACE

For ignoring pre-9/11 warnings and for "The Pet Goat".... impeach for WORLD RESPECT

For obstructing and gelding official 9/11 investigations so they ignored essential issues, failed to address 70% of the widows' questions, and failed to assign blame....... impeach for TRUTH and ACCOUNTABILITY

For creating a climate of fear and assuming dictatorial executive powers.......impeach for THE FUTURE