Add an Event
Newswire
Calendar
Features
Home
Donate
From the Open-Publishing Calendar
From the Open-Publishing Newswire
Indybay Feature
Publish to Newswire
Add an Event
Related Categories: San Francisco | Anti-War
Beach Impeach sends powerful message to congress
by Camille Sauvé
Sunday Apr 29th, 2007 12:20 PM
With splashes of orange, green, black and pink, and a myriad of other colors, about 1,500 activists came together on Ocean Beach in San Francisco on Saturday to spell out their demands to congress—-"IMPEACH NOW! in 100 foot tall letters. 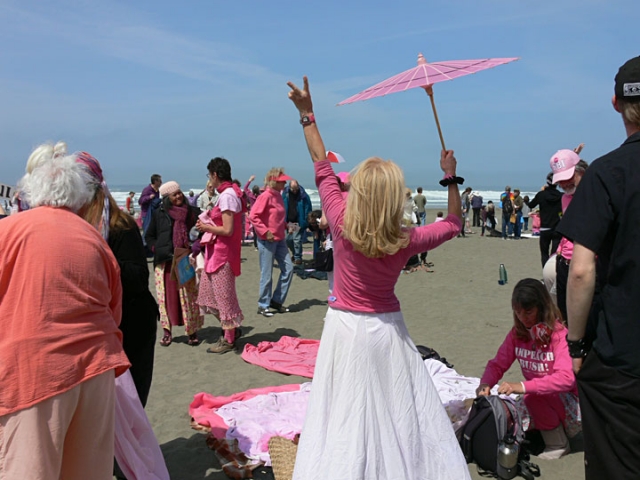 This gathering was just one of many impeachment events held around the world by individuals and organizations demanding that President George Bush and Vice President Dick Cheney be impeached for a variety of crimes ranging from 9/11, lying to start a war, war profiteering, illegal wiretapping and torture.

This was Newsham's second Beach Impeach event with the first one held on January 6 of this year. This time around there were enough people signed up to add the empathic "NOW!" to the message.

Asked why he felt it was necessary to do another event Newsham said, "After January's Beach Impeach, I felt like I had my finger stuck in a live electrical socket. There was such a flood of great energy unleashed by that event and pouring right through me -- and literally hundreds of charged-up people asking me,'What are we going to do next?'"

"I'd merely been aiming to create at least just ONE compelling visual to go along with all the words and chatter and impeachment bluster -- but once all those great visuals came from the January event, I suddenly felt responsible. And now people seemed to think I knew what I was doing -- I don't, by the way -- but I was almost FORCED to move forward. And yesterday's event is what came out of my moving forward.

"This will all have been worth all the time and effort and money, if this gets a message to our leaders, if we get an impeachment hearing, and if we get our country back from the people who have steered us off in these crazy directions we've gone since Bush became president," continued Newsham.

Various activists groups filled individual letters in the words with colors, including Code Pink which made the letter "C" a lovely shade a pink, and World Can't Wait who made the exclamation point a brilliant, shimmering orange.

"We filled the exclamation point with 50 people in orange jumpsuits and black hoods to represent the people who are being held and tortured in Abu Ghraib and Gitmo," said Don Spark, a local World Can't Wait organizer who was politely reminding people on the bullhorn to get into the outlined letters, "Please, no wandering pixels on the beach!" he jokingly admonished.

There were also many people in black with t-shirts and signs showing support for the 9/11 Truth Movement. Dana Carson from Oakland, who was wearing a shirt reading "Investigate 9/11", said that it was well worth missing a morning of his routine Saturday morning volleyball to be at the beach. "I feel it's important to be here with like-minded people and to show my support for impeachment as well as educating people about 9/11."

"More and more people are seeing that something is seriously wrong with the official story," said Carson, "We know we have been lied to, and, that is enough for me to call for impeachment."

Carol Brouillet from the Northern California 9/11 Truth Alliance, said "The best hope for our country and the world is the impeachment of a regime which has hijacked our country and is trying to dominate the world. Only by stopping them and reversing their poliicies, can we redeem ourselves in the eyes of the world. Truth, courage, humor, community and a passion for peace and justice unites all of us, but I think the sheer fun and joy of the beach made the "Beach Impeach" irresistible to activists, like the Northern California 9/11 Truth Alliance."

Other groups at the beach included members from the Green Party and Castro Valley Progressives who were wearing "V for Vendetta" masks. 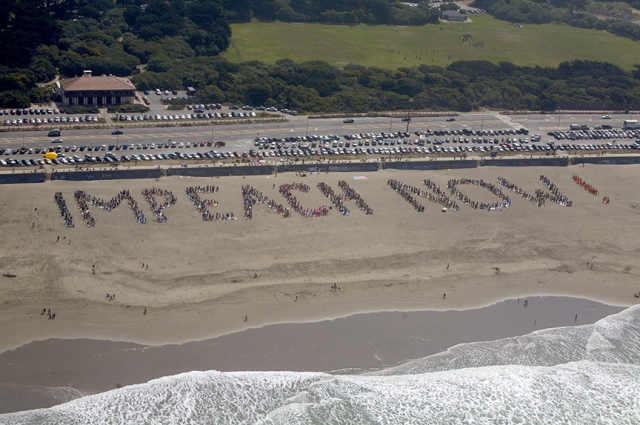 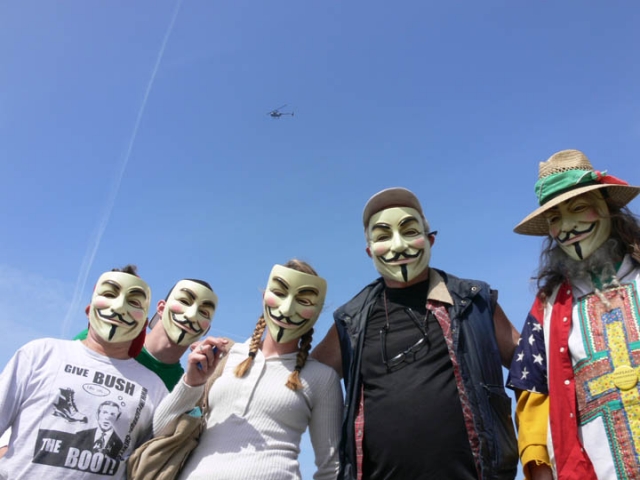 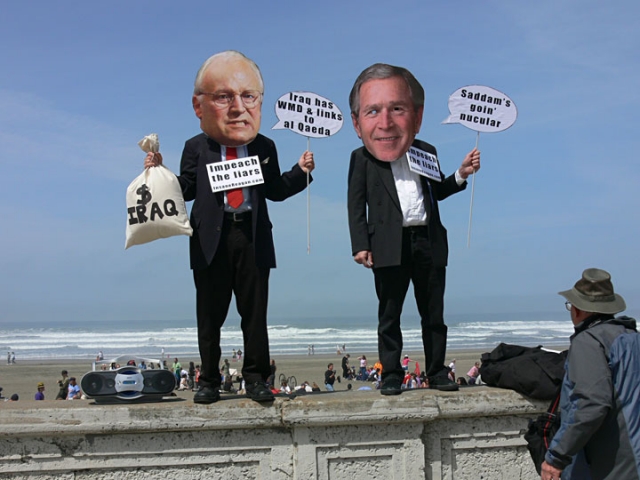 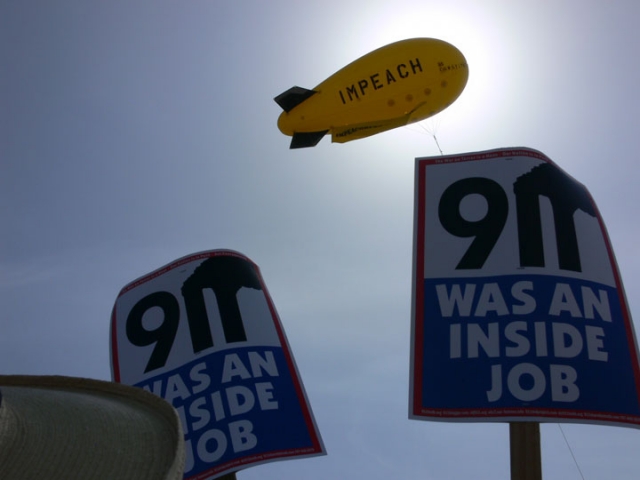 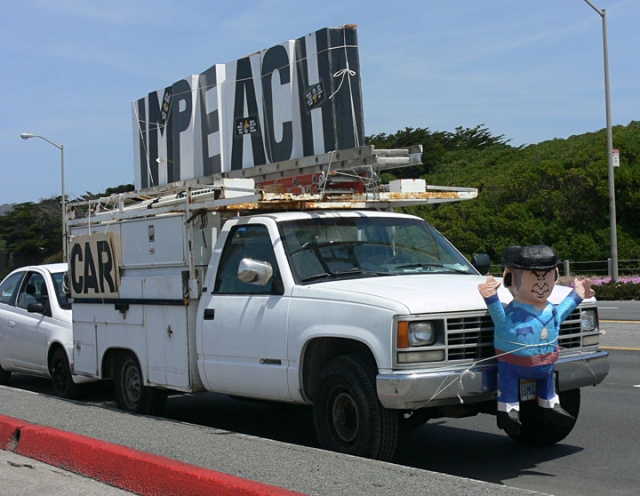 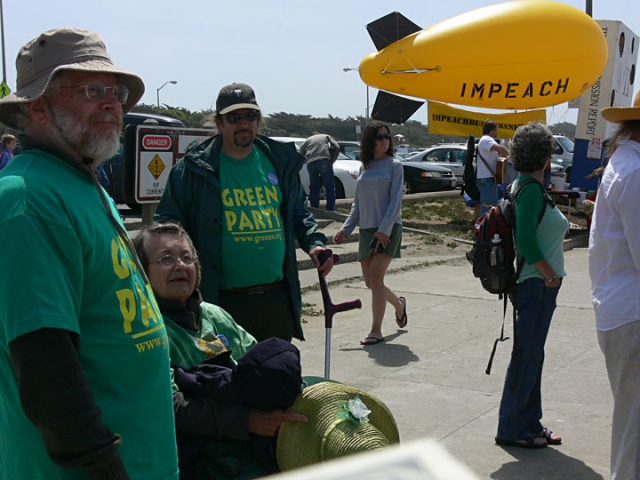 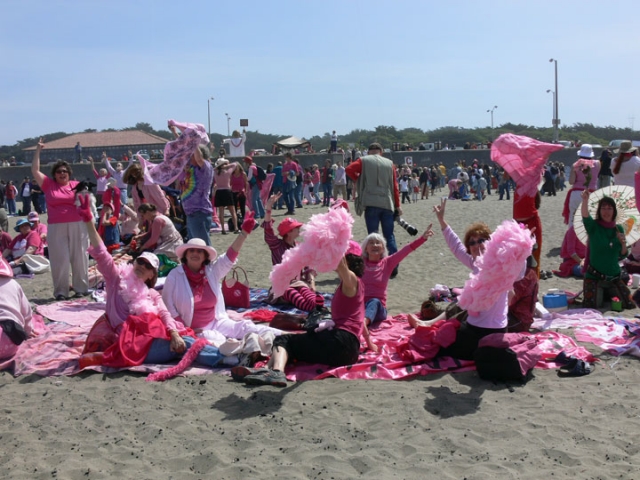 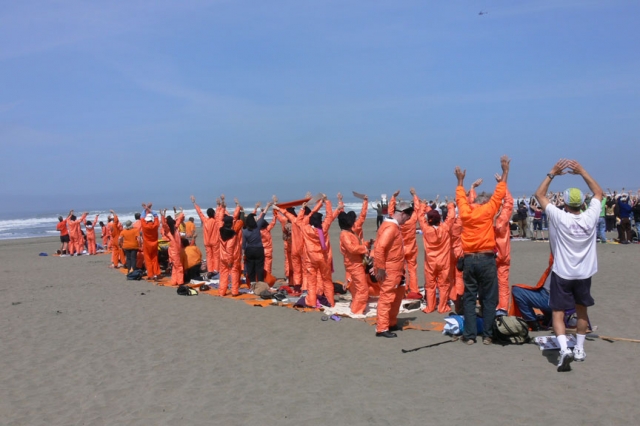 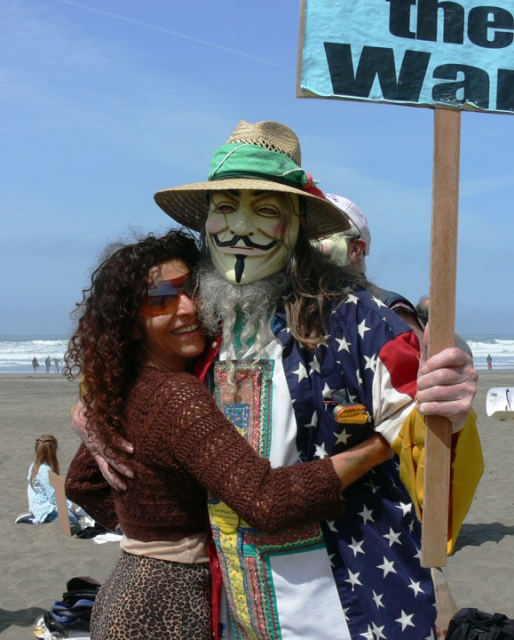 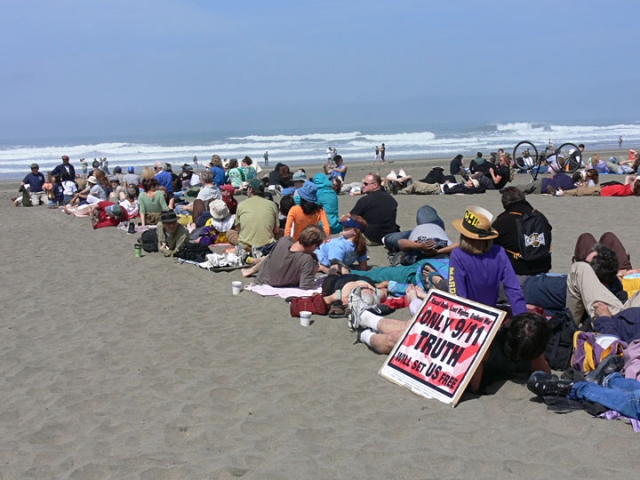 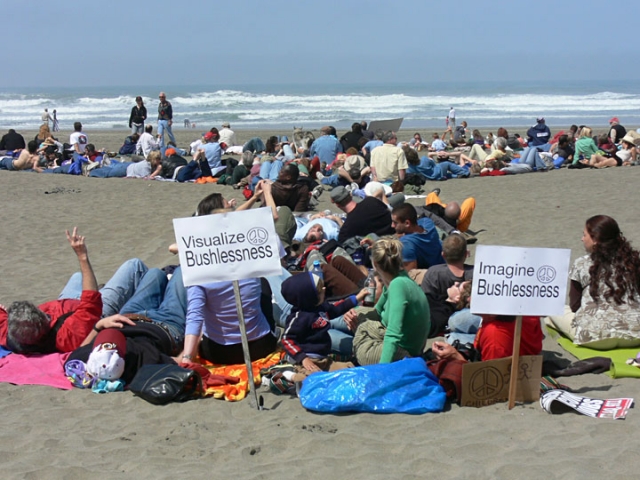 original image (720x540)
"Imagine Bushlessness" signs in the peace symbol
Add Your Comments
LATEST COMMENTS ABOUT THIS ARTICLE
Listed below are the latest comments about this post.
These comments are submitted anonymously by website visitors.